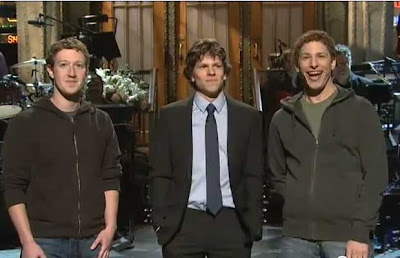 It was not exactly rocket science to think that putting Facebook's Mark Zuckerberg on stage with Jesse Eisenberg would be a fun sight gag. But...if, like me you were a huge fan of The Social Network it was more than just a fun gag seeing Zuckerberg, Eisenberg not to mention Andy Samberg (who was impersonating Zuckerberg, it was surreal. Kudos to SNL for putting the three together and for the joke about poking. The joke was funny but Zuckergerg's awkward delivery sold it. 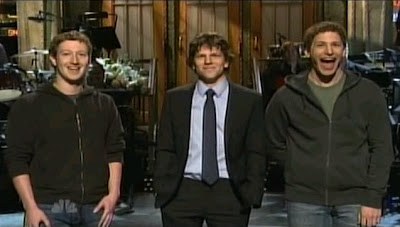 Email ThisBlogThis!Share to TwitterShare to FacebookShare to Pinterest
Labels: kudos