Favorite Pic of the Day for August 10th 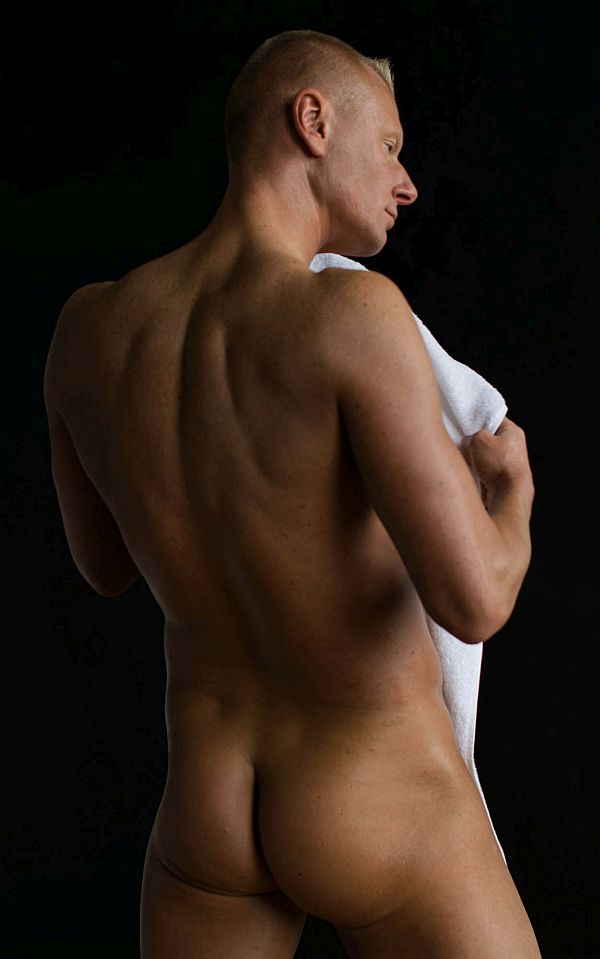 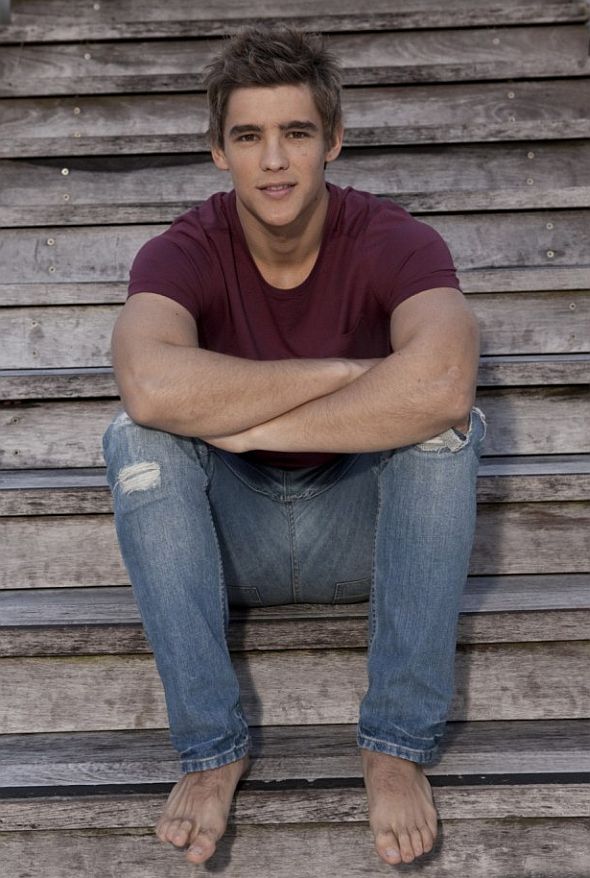 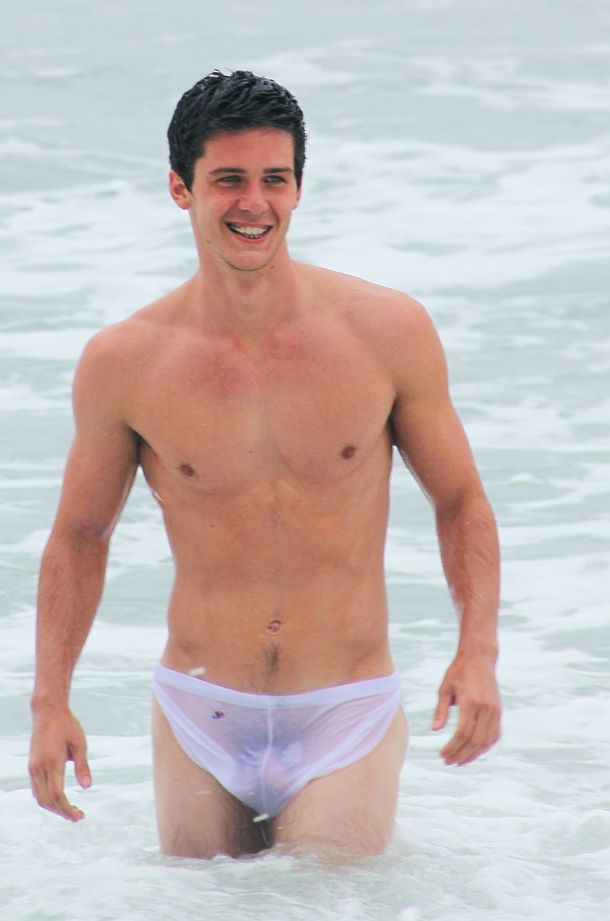 Windows of Opportunity: Brian Parker by The Third Eye 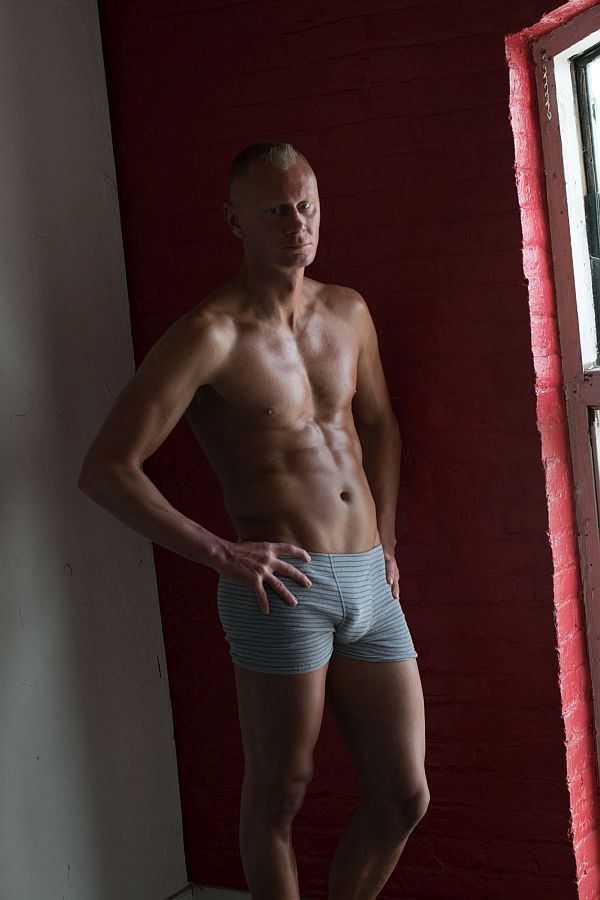 'I asked myself is what impact shooting nudes would have on my modeling career? I wanted to prove that I am able to do all sorts of different modeling. I have never done a full-frontal photo. Does anyone want to see that kind of photo? Hehe. I do think a full nude photo is coming very soon, and I am sure it will be published right here on Favorite Hunks! How does that sound to everyone?? Stay tuned...' 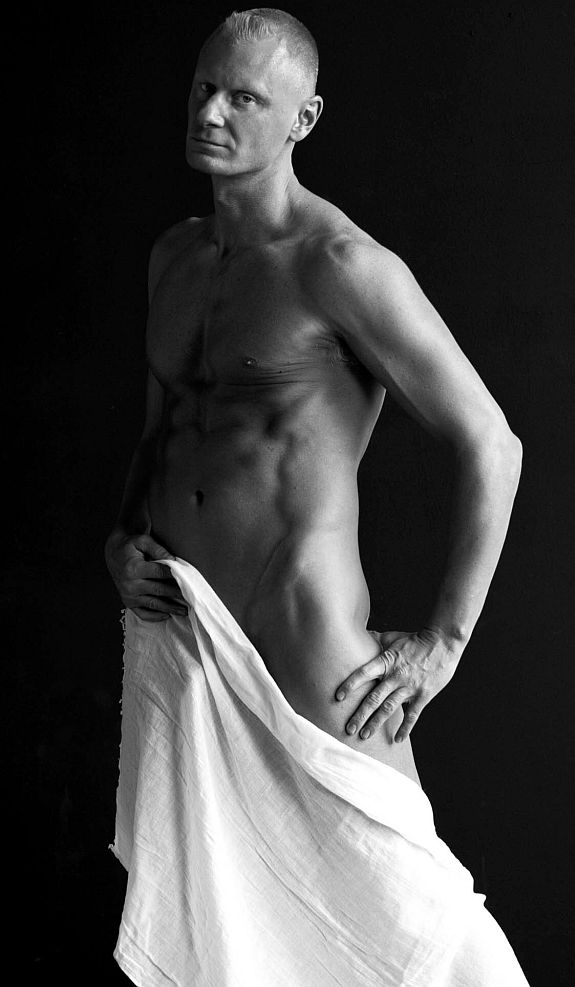 The quote above was from my first interview with model Brian Parker. (The Art of Modeling) I was asking Brian about his views on nudity and whether he had any boundaries about the type of images and projets he might consider. Truth is, if you're a male model, especially one that shoots fitness, shirtless or underwear shots, the question of full frontal nudity is bound to come up. The decision to drop your pants and have your penis forever captured in an images is a complicated one for many. 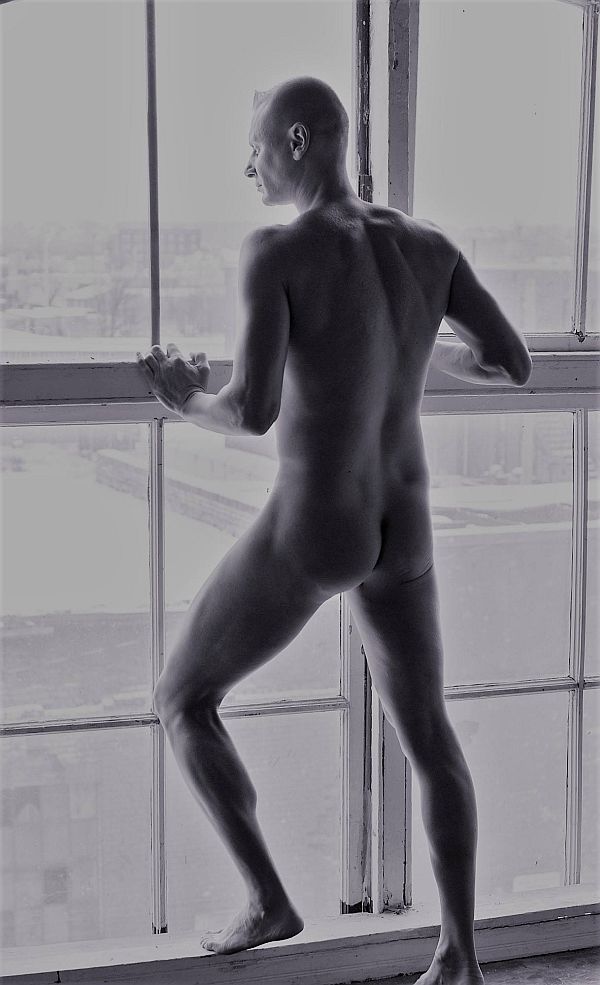 It has always bugged me that some assume all men fine with anyone and everyone seeing them naked. When a female celebrity is photographed naked without their consent, their is usually a consensus she was violated, and emotionally sexually assaulted. When the same thing happens to men, just think of Orlando B last year, it is generally seen as funny, with many assuming that beyond maybe a minute of embarrassment, it was not a big deal. Certainly models choosing to pose nude is not the same thing, they are making a choice. The that choice doesn't come without pressure, especially for men. 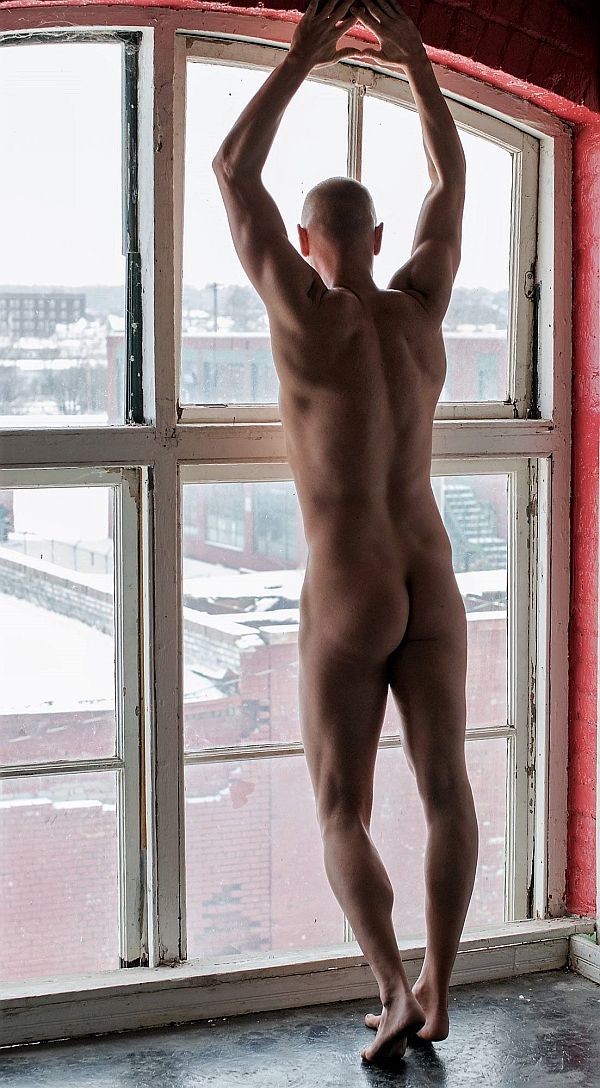 I have always known that men are not all created the same, and working on FH I have seen over and over that the comfortably with yanking down your undies for a camera is different for everyone. Some guys are just more comfortable than others. Some have no hesitation, no issues and no worries. Other guys are fine with posing, but are more careful about if, and how, the images are shared. They worry mostly about how they might impact a career or future relationship. Other guys are hesitant, but feel pressure, mostly financial, as it much easier to make money modeling, especially as an amateur, if you'll pose nude. The struggle isn't just confined to new models. Young models might be worried about wrecking future prospects, older models have different pressures as work opportunities get leaner as models speed through your twenties and thirties. 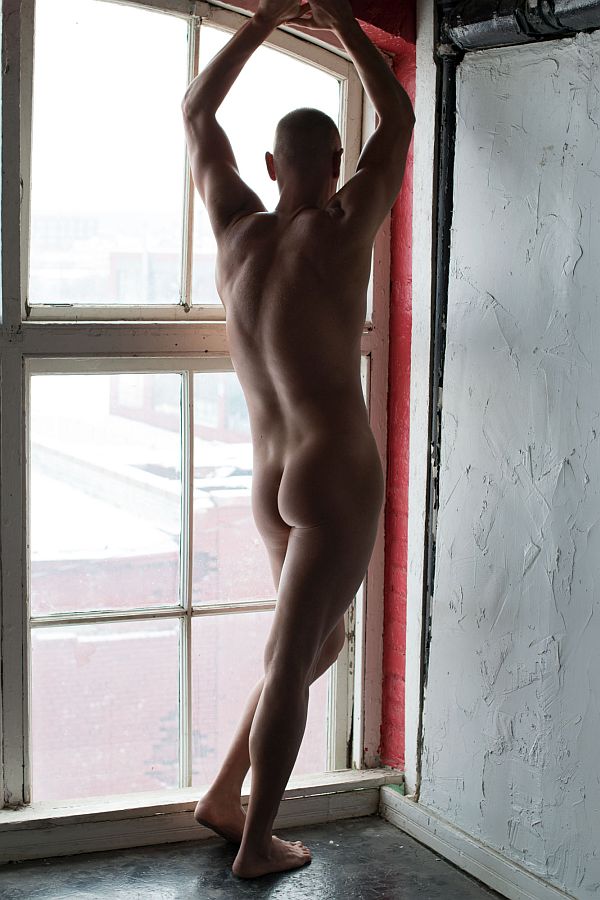 Deciding to shoot naked in front of the camera is not as simple a decision as some assume. For some, it is simple, but for others, it can be deep rooted into who they are and also their relationships with others. It is beyond self esteem. Many extremely confident men have no desire to model naked, and many men, some struggling with body and self esteem issues take their clothes off for the camera. I have learned through my profession, that not all men are raised in homes that encourage a healthy body image, and many have had negative experiences and times of struggle and even shame. Not that has to be that complicated. I have a straight friend who yanks off his pants whenever he can, at the beach, in the woods, at lake. Whenever he thinks it safe, he rips off his clothes and runs around like a kid on the last day of school. But... he gets man when anyone suggests a selfie or picture. For him, being naked, even in front of a group of friends, is about freedom and trust, it is neither sexual, nor something he wants in images for people he doesn't know to view. 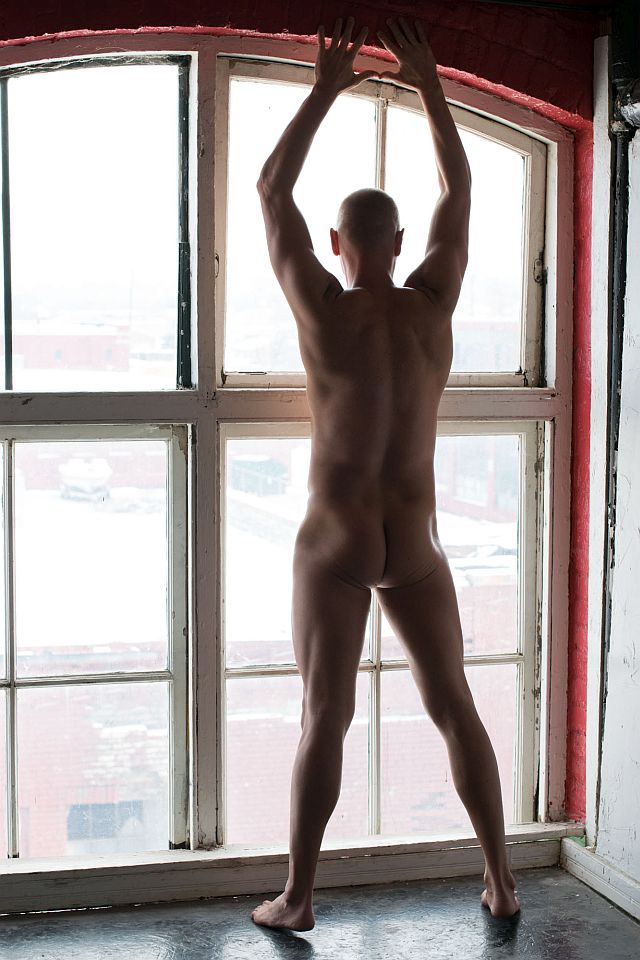 So, that brings me back to Brian's quote at the top of the page. Brian indeed has shot full frontal since answering my question last year. He chose a photographer he trusts, and considers a friend. As many highly skilled and professional photographers there are shooting the male form, the reality is there are also predatory photographers that make choosing who to trust, and wh shoot with, an even more difficult decision. Brian made a great choice. The Third Eye's Richard is someone known to be supportive of the models he shoots, in addition to creating incredible imagery. He is also someone I know to be incredibly straight forward, professional and highly skilled.

The images came out great, Brian has a incredibly fit body, and his enthusiasm, passion and desire to create great images always shows. I especially loved the series of shots in front of the window, with the natural light beautifully cascading over Brian's skin and tone physique and perfectly sculpted backside. You will notice, that there are no frontals in this piece. Not that they were ot taken, not because they didn't turn out amazing, and not because Brian didn't send them on to me for publication, he did. But... I detected a hesitation. It was slight, but enough for me to pause and double check that he wanted me to go ahead and include them in the piece. Brian was fine with me sharing some of his response my question. 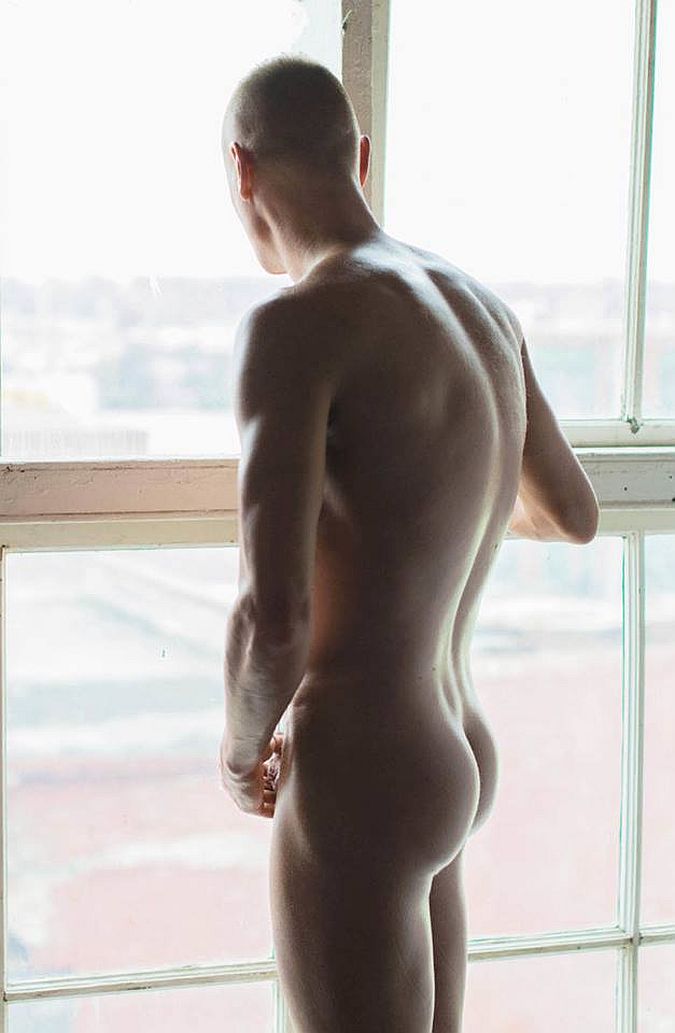 'Richard, (The Third Eye Photography) and I are actually good friends. It started out with doing photoshoots, which escalated into friendship. We have collaborated a lot about my shoots and goals in modeling. We did agree to do a nude shoot to see what it looked like on camera. I have done a few shoots nude since that time. I would say with all of my shoots about 10 percent are actually nude and very few are full frontal. I did some nude work in Dallas and also in Philadelphia. I saw the photos and I thought a few were great. The Third Eye makes the shoot fun, joking around during the shoot, makes me more comfortable. I don't have much experience in nude shoots compared to other genres of modeling. I want to continue to make photos that people enjoy, and I am continuing nude art until I make a nude photo that displays perfection. I think once me and my photographer have developed that shot. I will have no choice than to share with the people who enjoy viewing the male form of modeling.'

I have so many supporters who write me telling me my work gets them through the day. They love seeing my new photos come out. I try to be a positive person that makes their day better. I guess the fact of the matter is that I am worried that a full frontal nude photo may misrepresent me. I am worried that I will lose a lot of that respect I built if I publish a nude photo. Maybe they will think I am acting desperate for a publication based on my age. When that is not the case, I feel like I am in the best shape of my life. I really feel good about the future and future shoots. I have a lot of goals in my modeling career.' 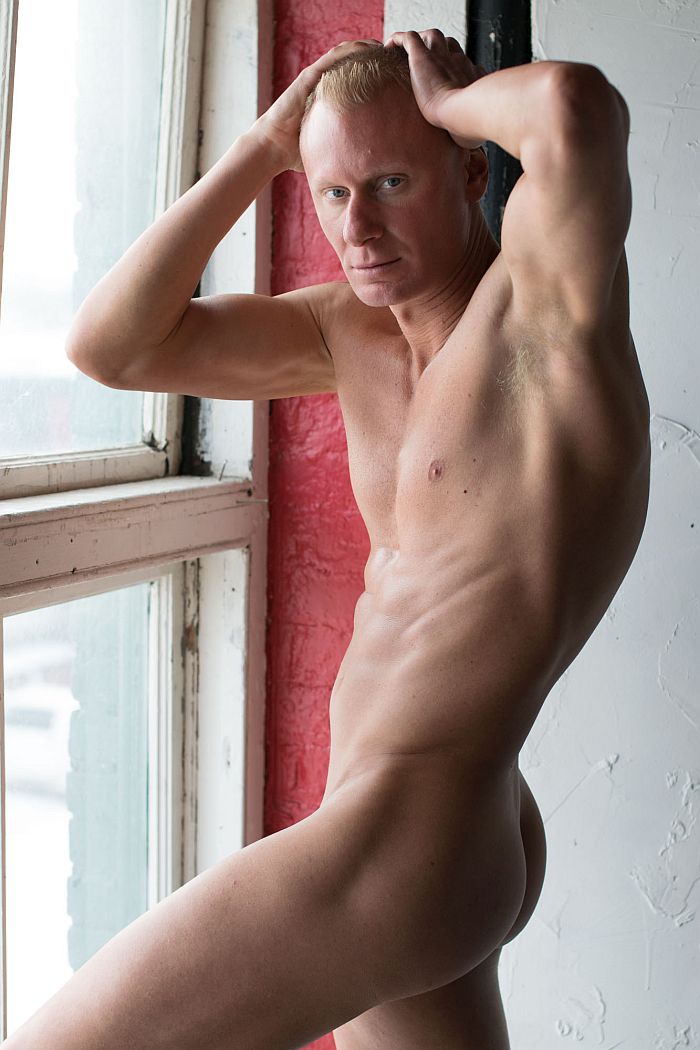 'What is so wrong with nude modeling? First off, its different for male models. I think when people say model they automatically think of a female body. I personally think the most significant art photo is based on the male form. A male model takes weeks to prepare for a shoot, and I don't think they always get a lot of positive attention. I think it has to do a lot with peoples perception of males in general. Many may think of porn or sex rather than the art it creates. I do not have a problem with taking part or viewing nude modeling.

Modeling is to show the art of the human body. With that being said, I don't know why I would feel guilty of publishing a full frontal nude photo. I guess I am worried about others perception of what that photo consists of. Many people always ask about my sexuality, and rather I am gay straight or bi. I don't really care to elaborate on my sexuality because it is not about my sexual preference. It is about taking pleasure in the art I created in my photo. I like my photos to Xpress something. A story being told. The photos I did by the window tell a story.. They're more than just a photo. The most beautiful photos are nude, because many can relate to ancient times when clothes were not really worn.' 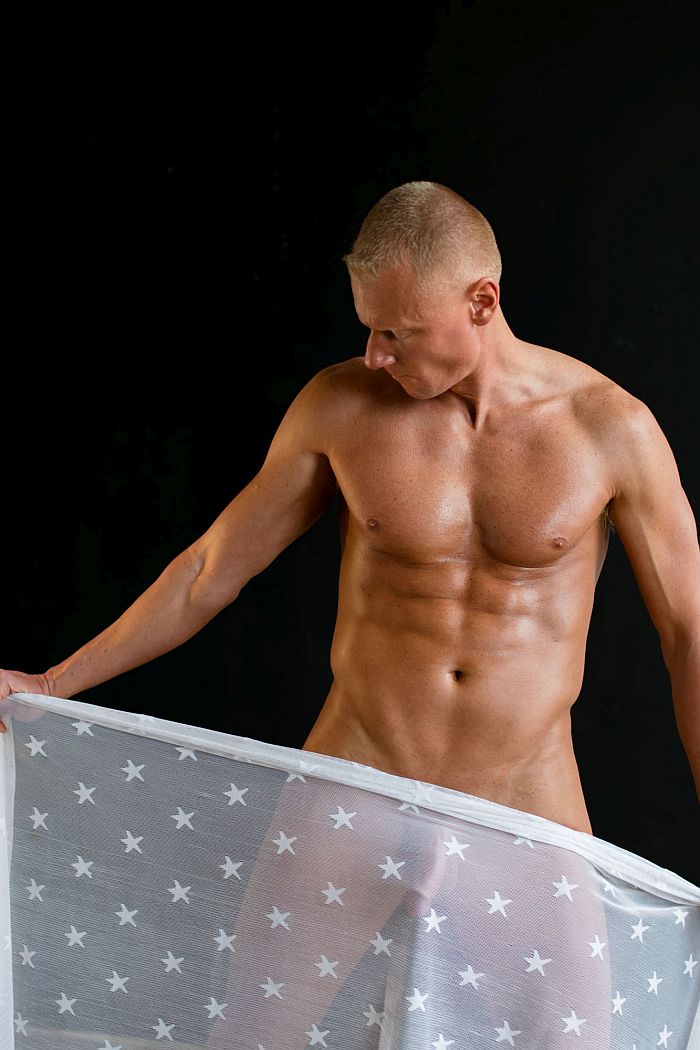 I so respect Brian's willingness to share his struggle with figuring out what is best for him, and his career. I know it's something many models face, and thought his story was compelling. My main advice to Brian, not that he needs it, is to follow his gut. We all have to make a living, and I fully understand his worry. I would only add that making a living from modeling... is a risk. It's a gamble without great odds, especially for a man, and even more so for a man over 30. If financial gain is the driving force, care must be taken. To me, the best photos I have featured include full nudes, but they are also done by artists, who don't focus, nor care that much, about the penis. (a great example being the Utah series I feature each year). If don't enjoy shooting nude, nor feel comfortable with them being published, don't do so. If you like posing nude, want them published, but are most worried about the reaction, I say go for it.

Truth is, there most likely won't be much of a reaction, and most of it, is usually positive. The followers that really know and respect you, will continue to do so. Given Brian's focus is primarily on making art, the main factors are about who you're shooting with, and what their goals and concepts are. When Brian sent on this set from his work with Richard, there were a few frontals in front of the window. They were beautiful, but in the end, I really wanted to showcase the series regardless.  With or without a penis, the images are extraordinary. 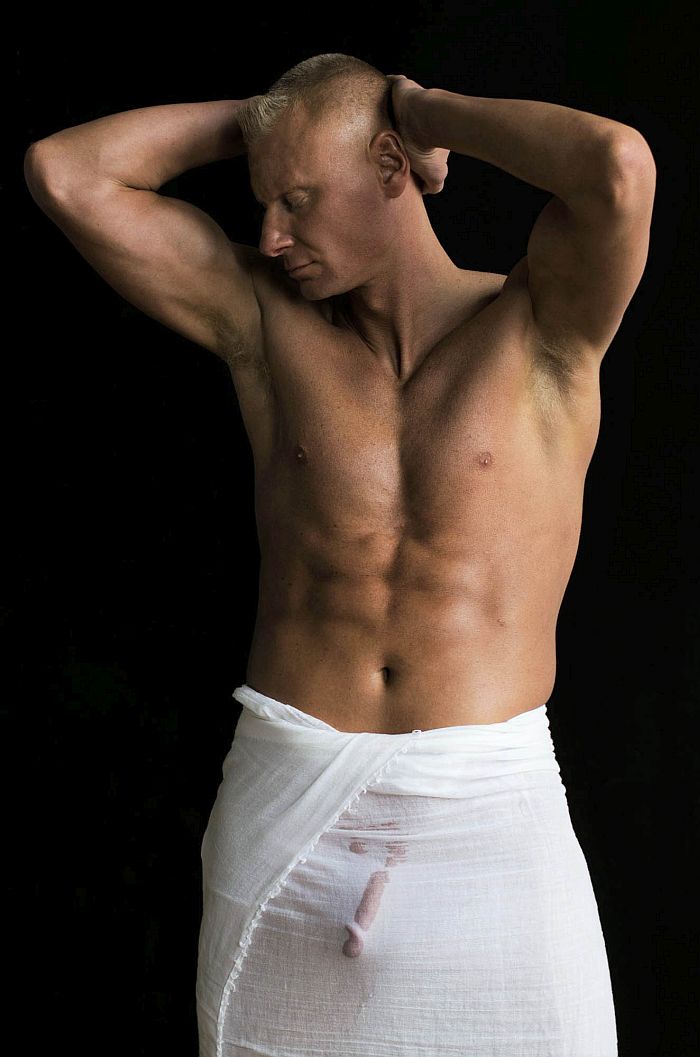 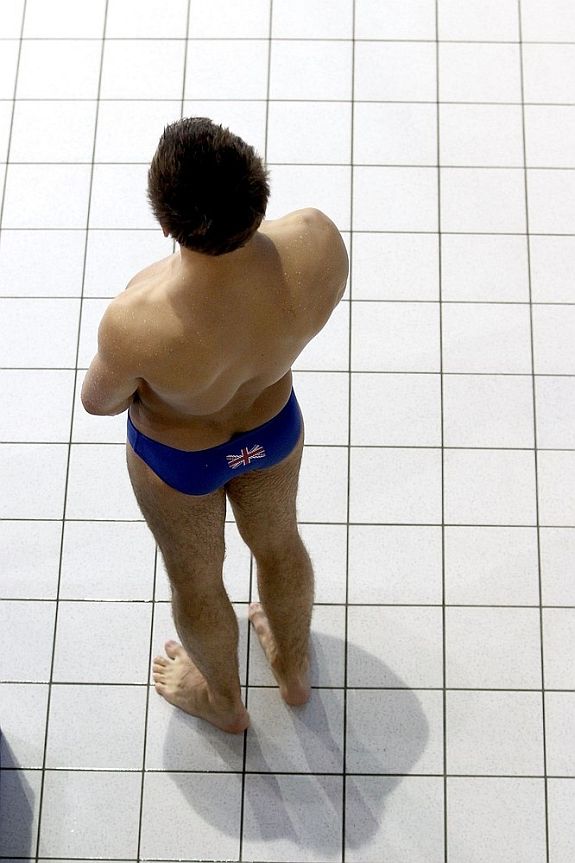 We all watch diving comps for different reasons. The sport and aestheticism, the beauty and precision of a perfect dive, the speedo bulges and hope of butt crack as divers resurface and get out of the pool. Thankfully many swimmers slip off their speedos, letting us in on what's lies beneath the nylon and spandex. 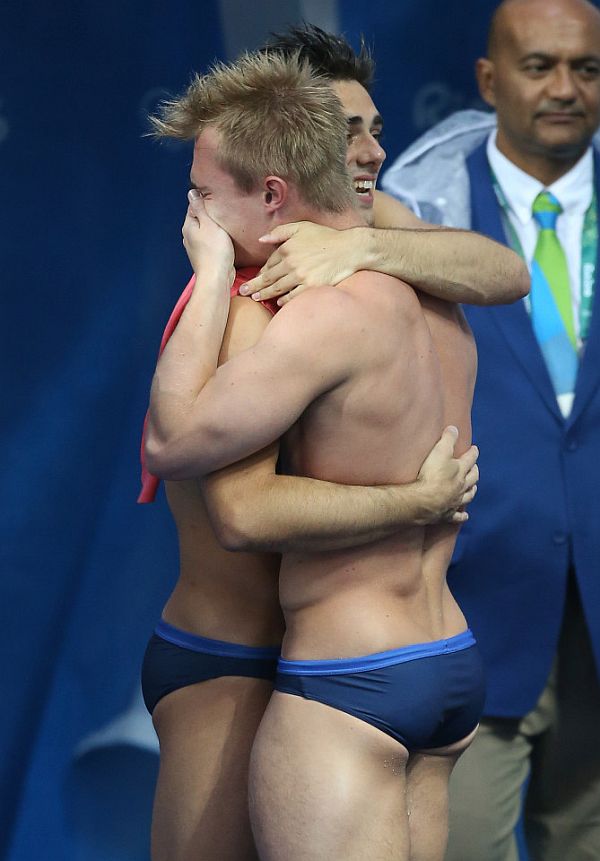 Tom Daley tends to get most of the attention, but there are many other divers who deserve the spotlight. Diver Jack Laugher has shown his tight divers butt a few times, most notably in 2013 spread in GT. (Gay TimesG) Nothing could prepare us however, for the image he posted on his Instagram last week that was instantly spread all over the net. 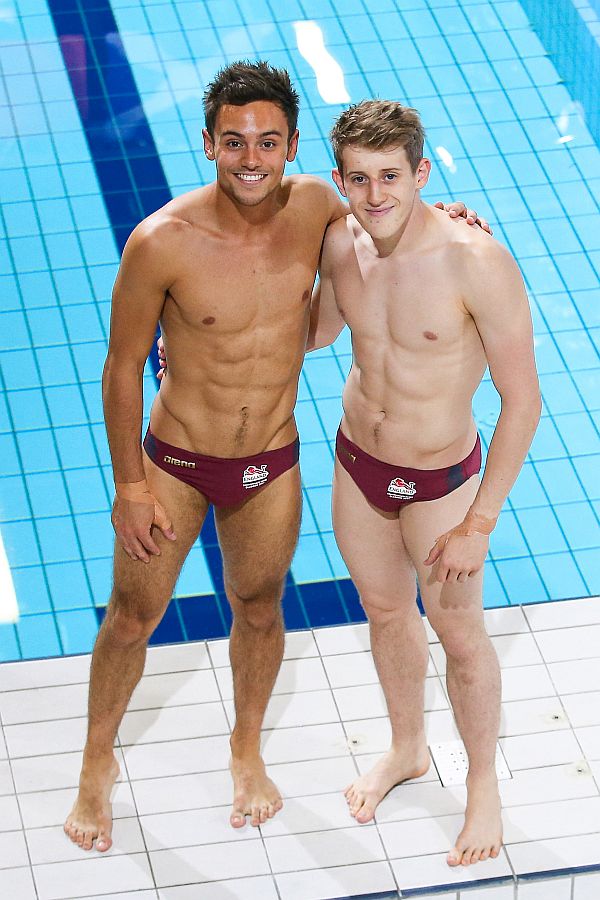 The shot included Jack, along with fellow British divers, and friends, Ben Sambrook, Dan Goodfellow, Will Hallam and James Denny. I thought I would put the speedos back on our divers as a bit of a introduction the Pièce De Résistance image at the bottom. 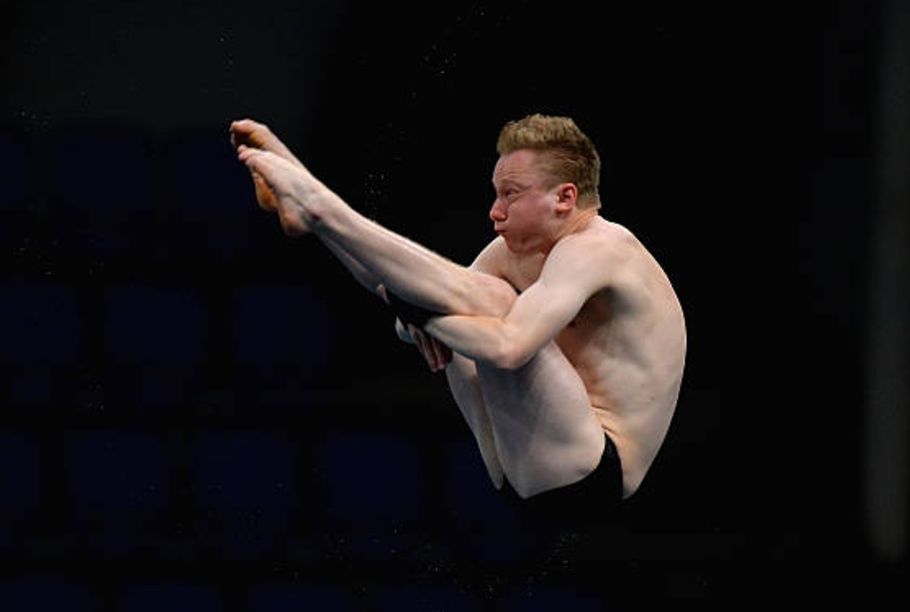 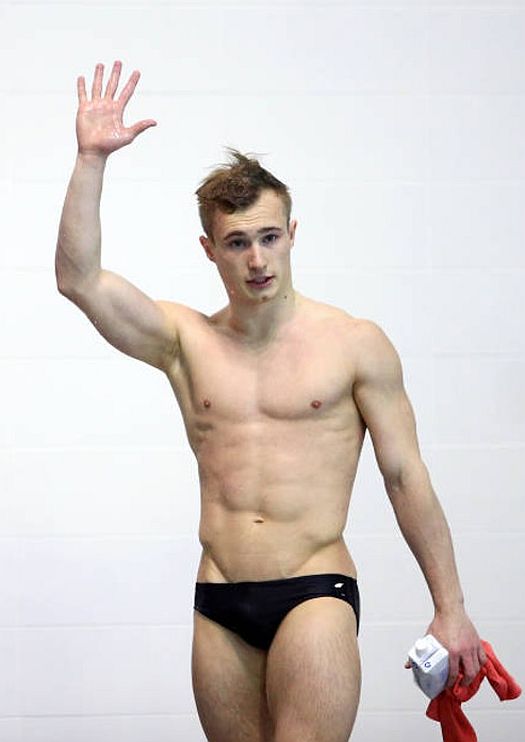 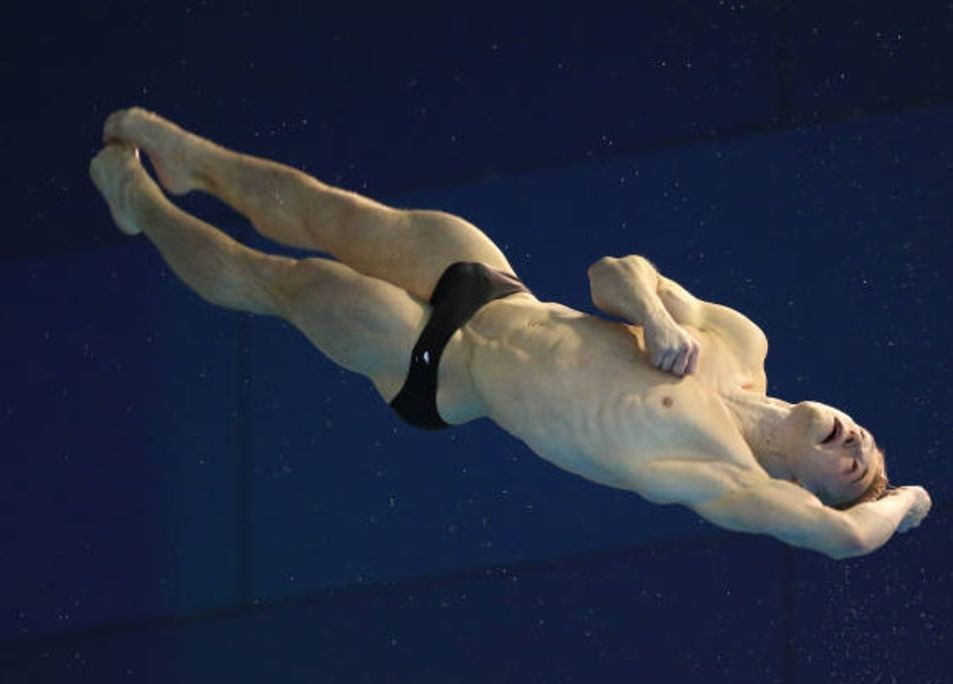 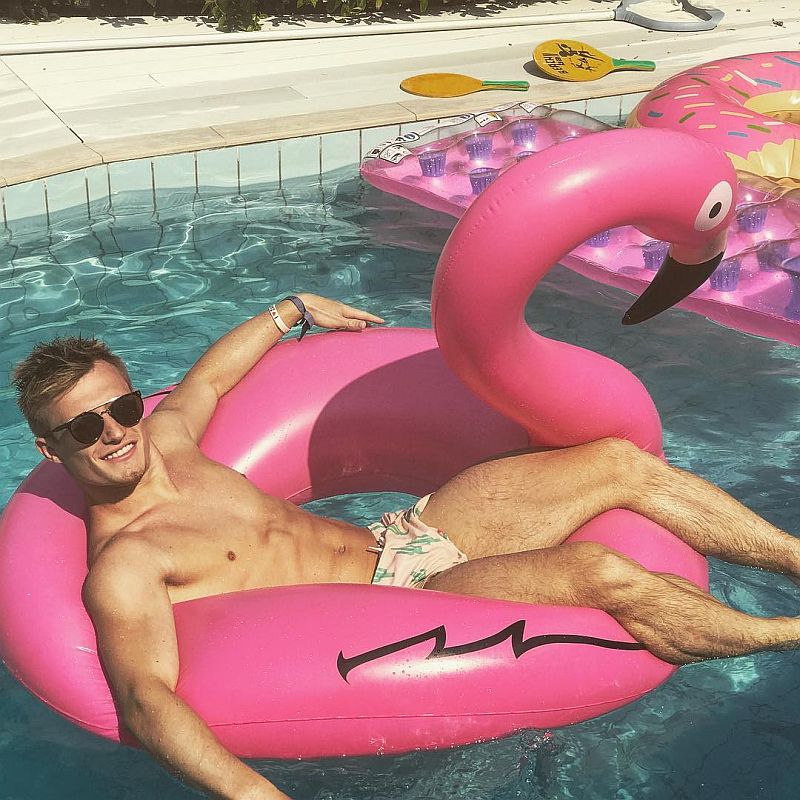 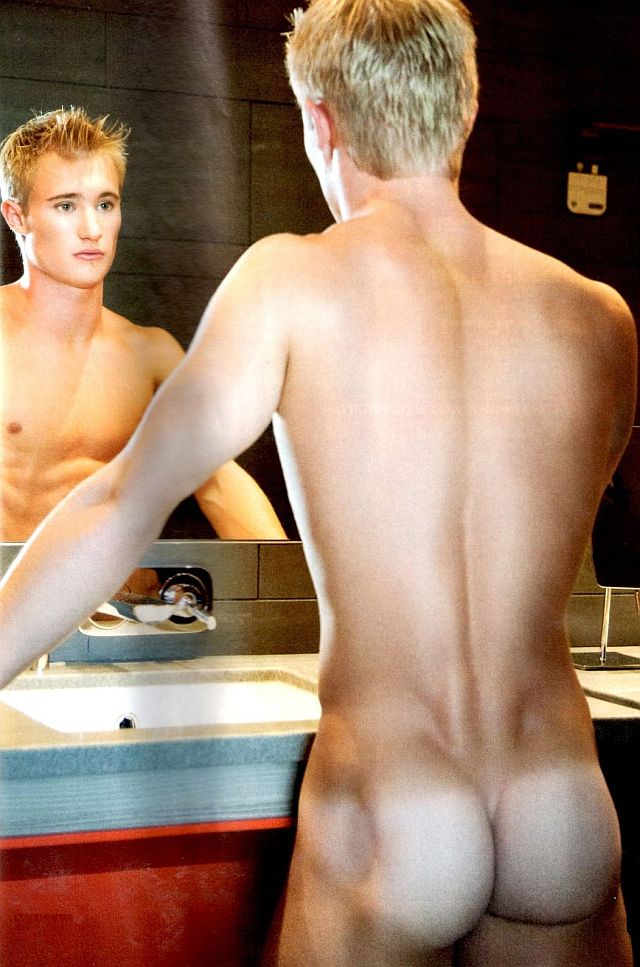 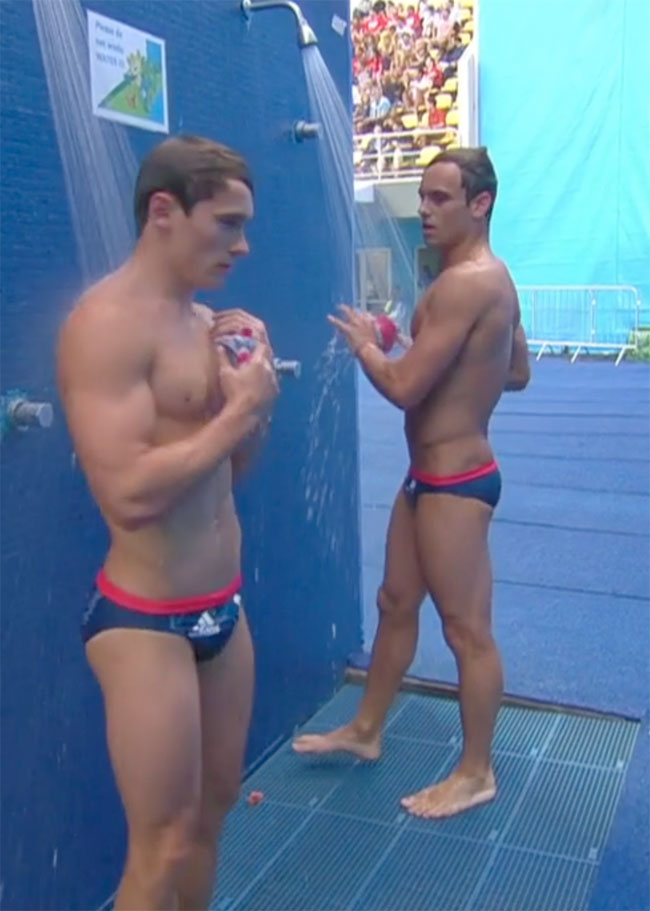 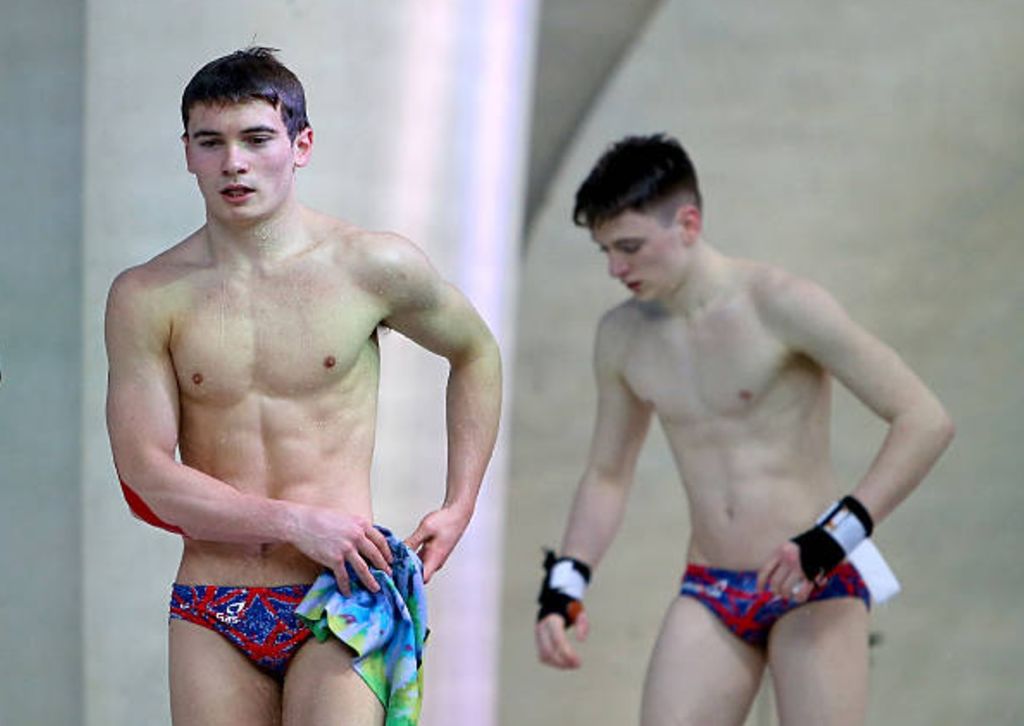 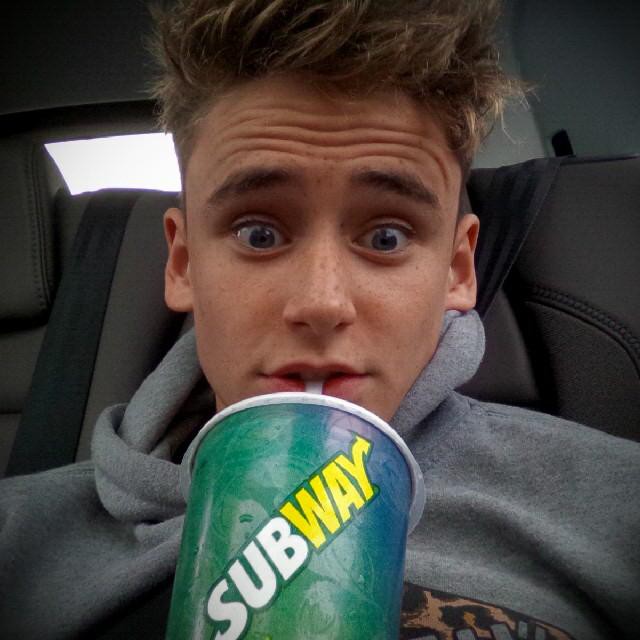 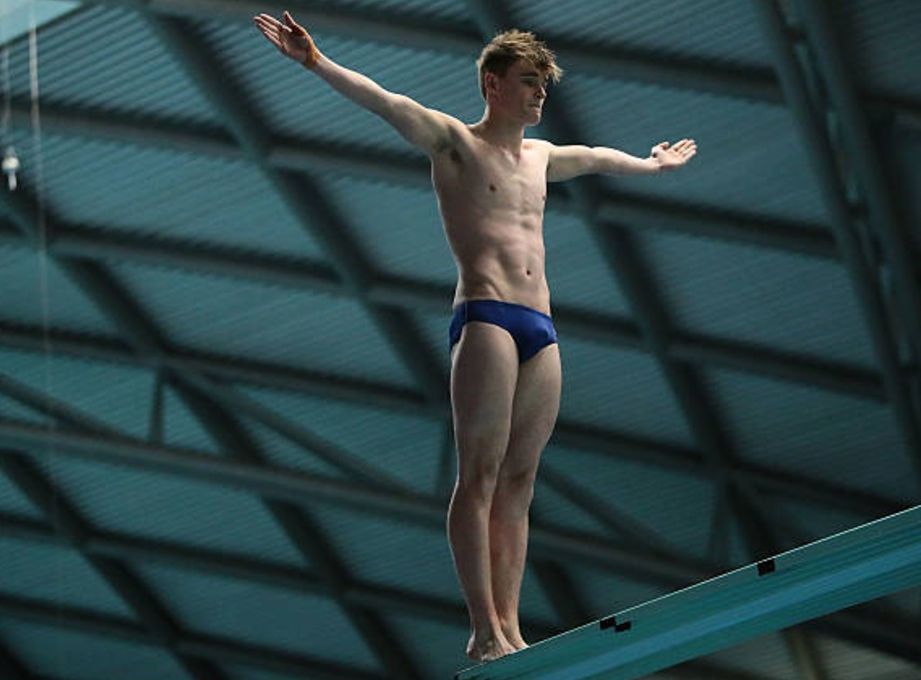 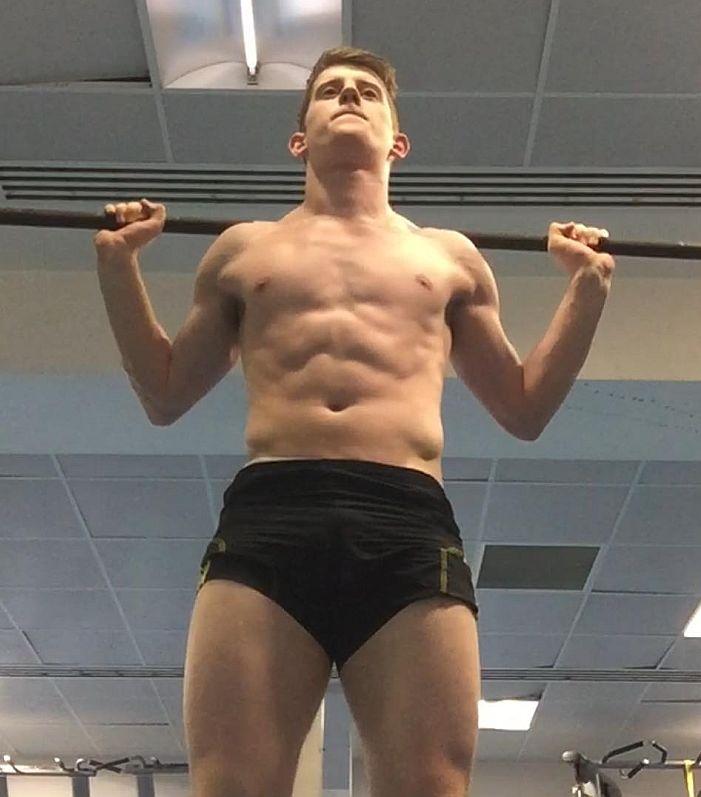 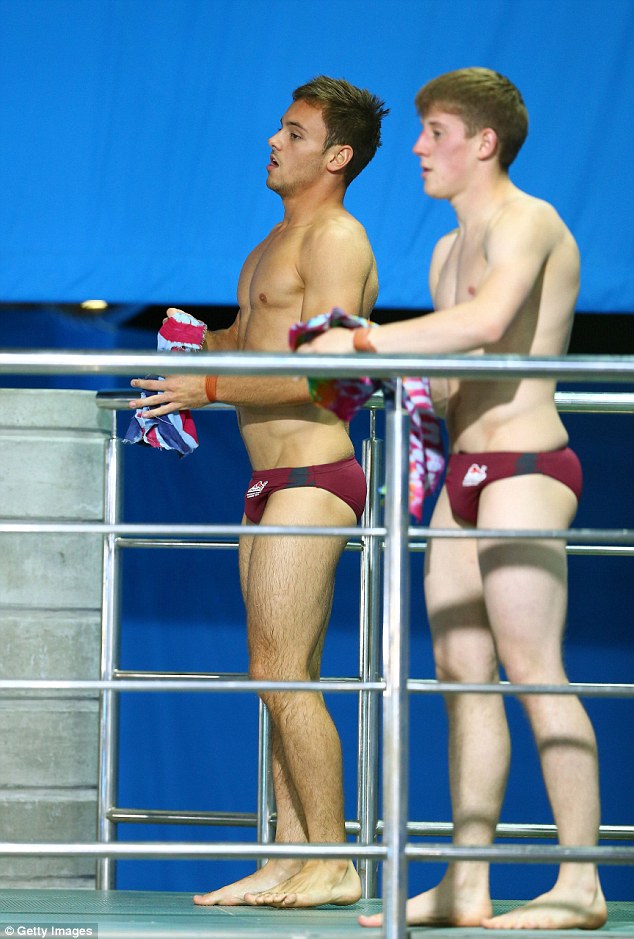 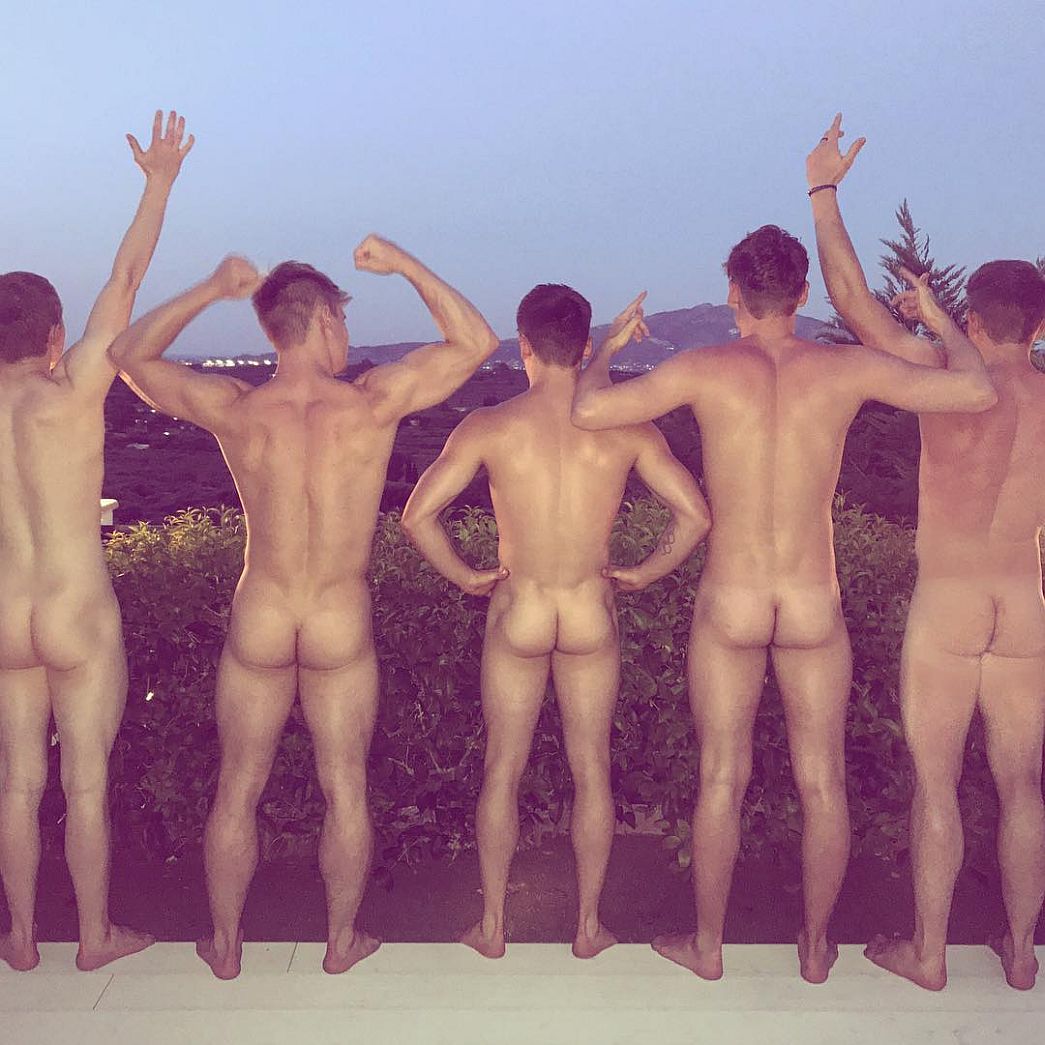