Favorite Pic of the Day for November 26th 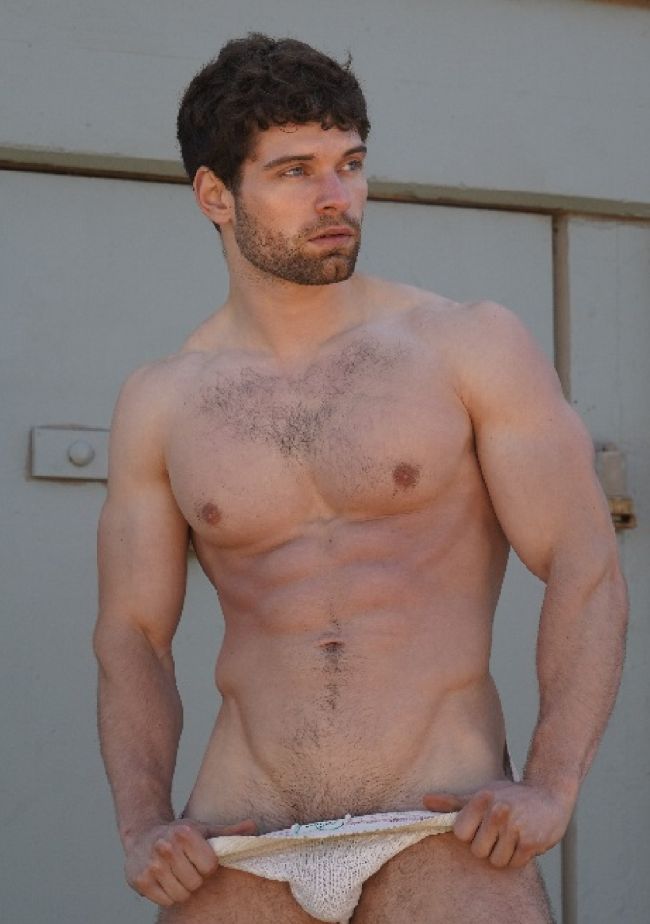 Above:
Nicolas by StudioMGphotography
-See More Below-
~Check out today's BIRTHDAYS HERE: & HERE:~
at November 25, 2022 No comments: 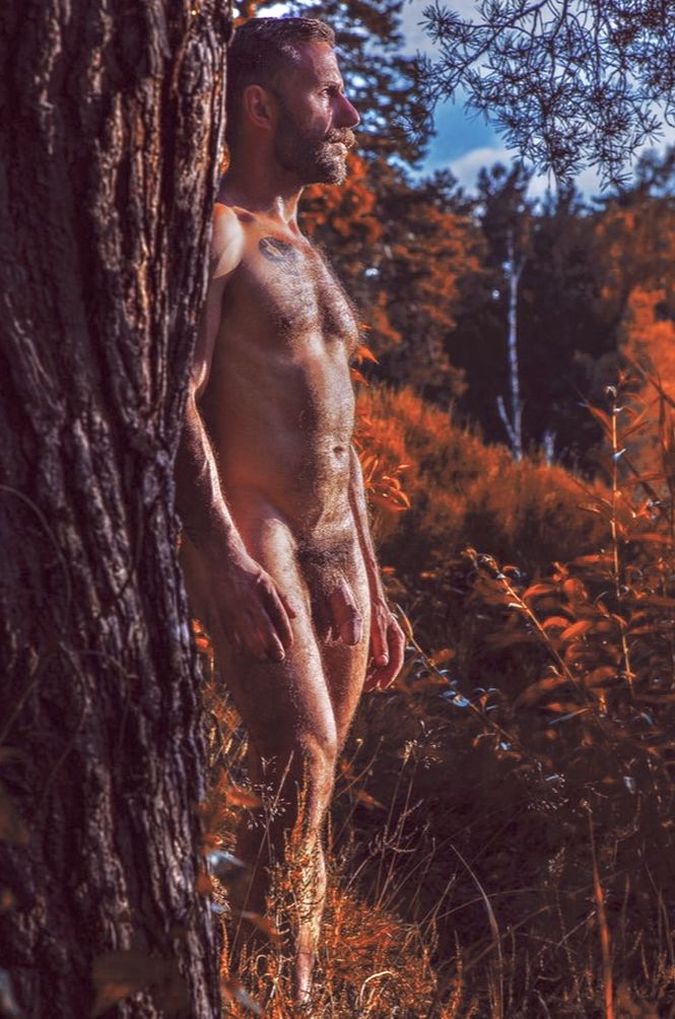 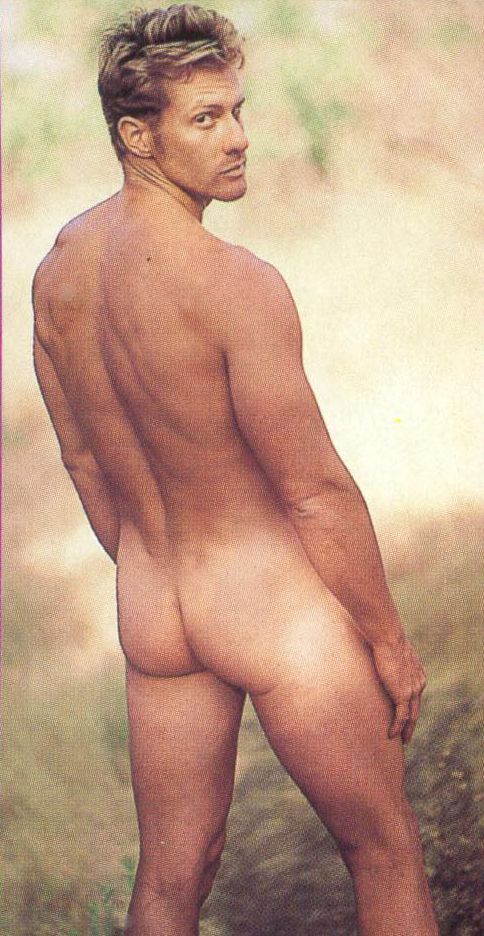 Last month, as part of my Horror Hunk series, I featured model and  actor Lance Moseley in the 2000 softcore thriller Passion's Desire. (HERE:)  In the piece, I shared one image that I had found from Lance's spread in the 1990's magazine,  Australian Women's Form.   Hearing that I wanted to see more, DC poster ScruffyA came to the rescue!  Check out the full layout on the NEXT PAGE HERE: 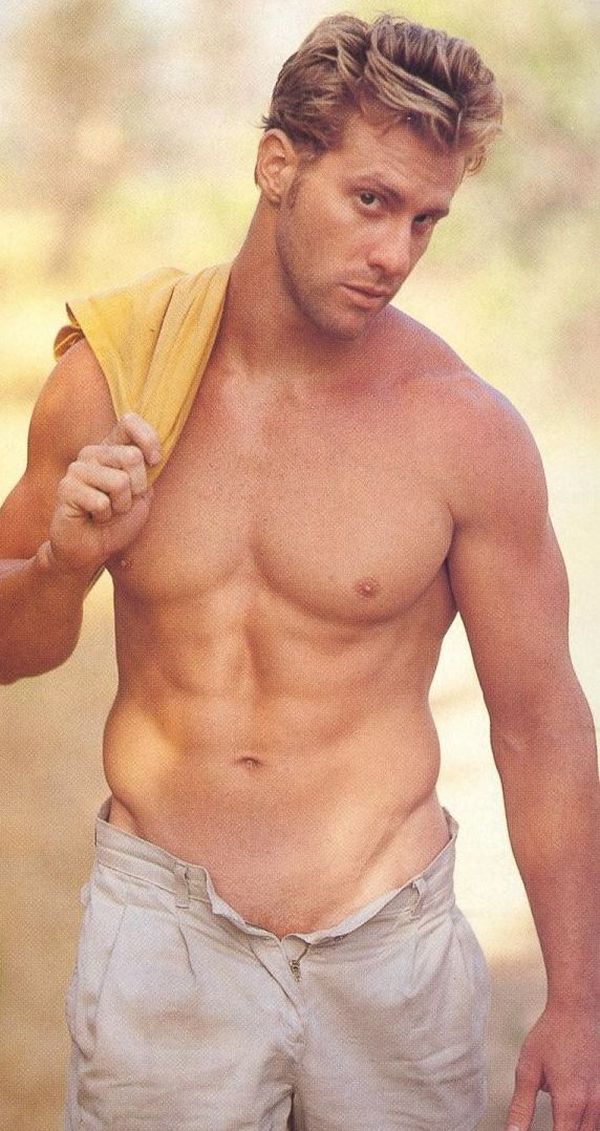 In A Blink of the Eye: Nicolas by StudioMGphotography 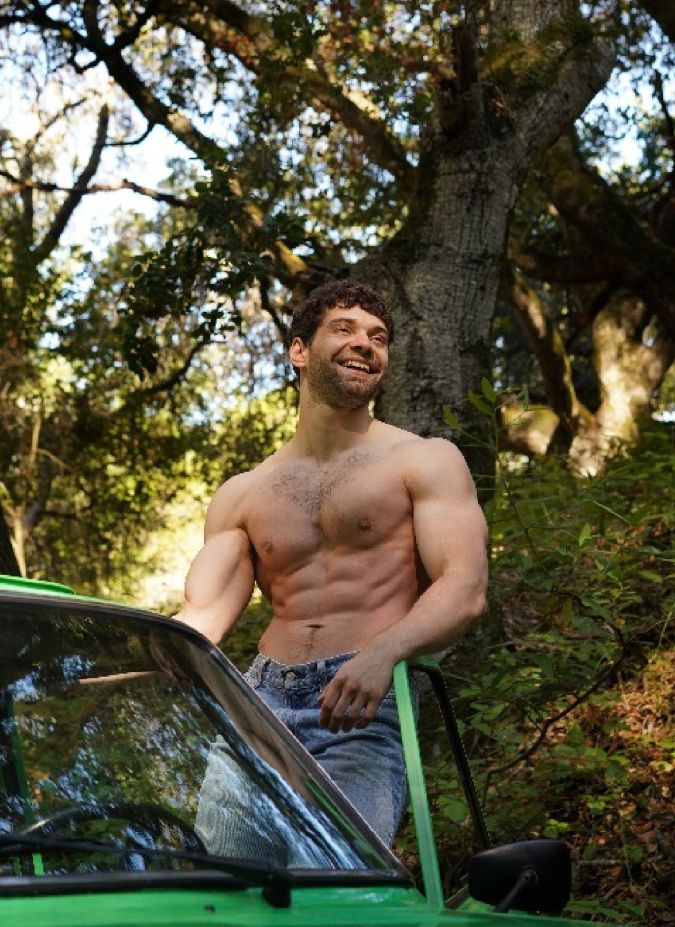 'Imagine a cross between a Greek God and a matinee movie idol and the resulting man might well be Nicholas! '
StudioMGphotography 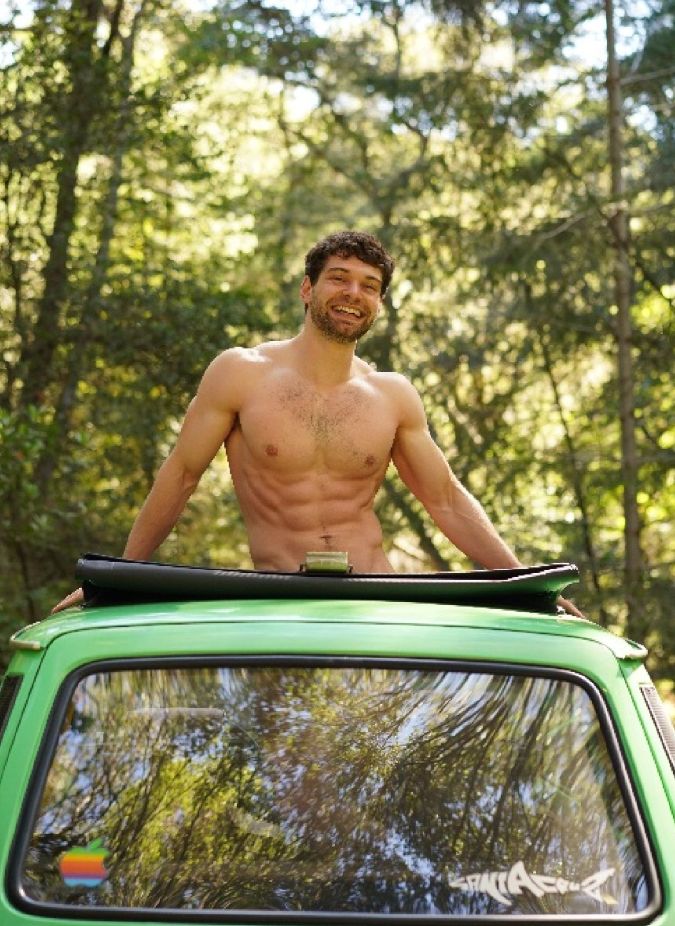 Last summer, some of you may remember being introduced to Nicolas and his work with Mark from StudioMGphotography;  It was during the hot and muggy month of August and Mark's images of a soaking wet Nicholas playing in a kiddie pool, (HERE:)  both cooled us off, while getting us hot and bothered all at the same time. 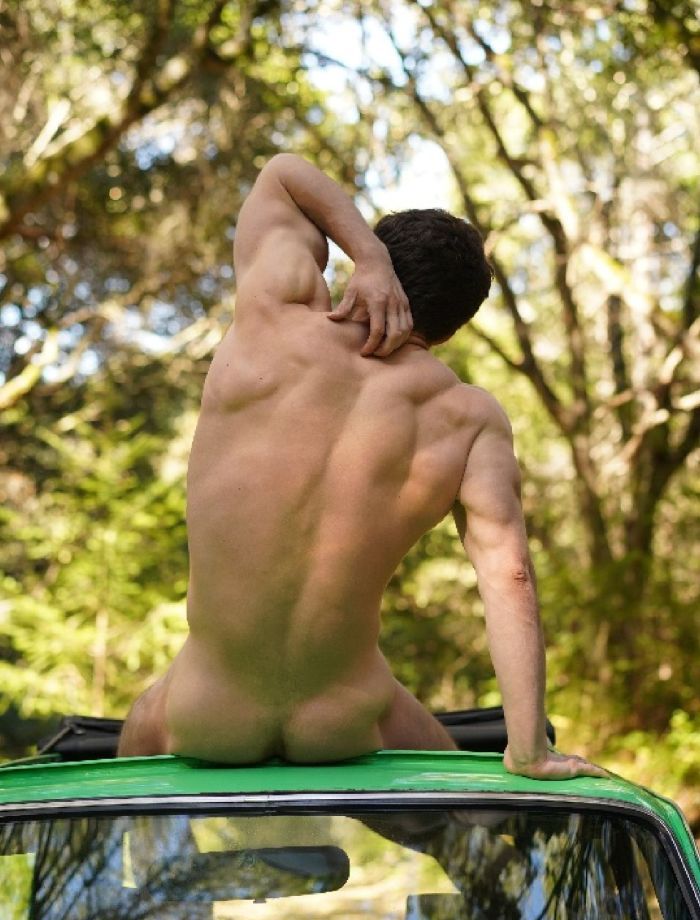 Nicholas sf flown across the country to shoot with Mark, and only had about 48 hours to shoot.  Given the short time frame, Mark was determined to make the most of every moment they  had together.  They got up early and worked until the sun went down, shooting various themes and in several different locations.  They shot at an old watch tower, in front of several storehouse facades, in a river, on the rocks, on an old suspension bridge, and of course, with Nicholas' playing in the kiddie pool  Mark remembers there time together was a lot of fun, but went by in the blink of an eye. 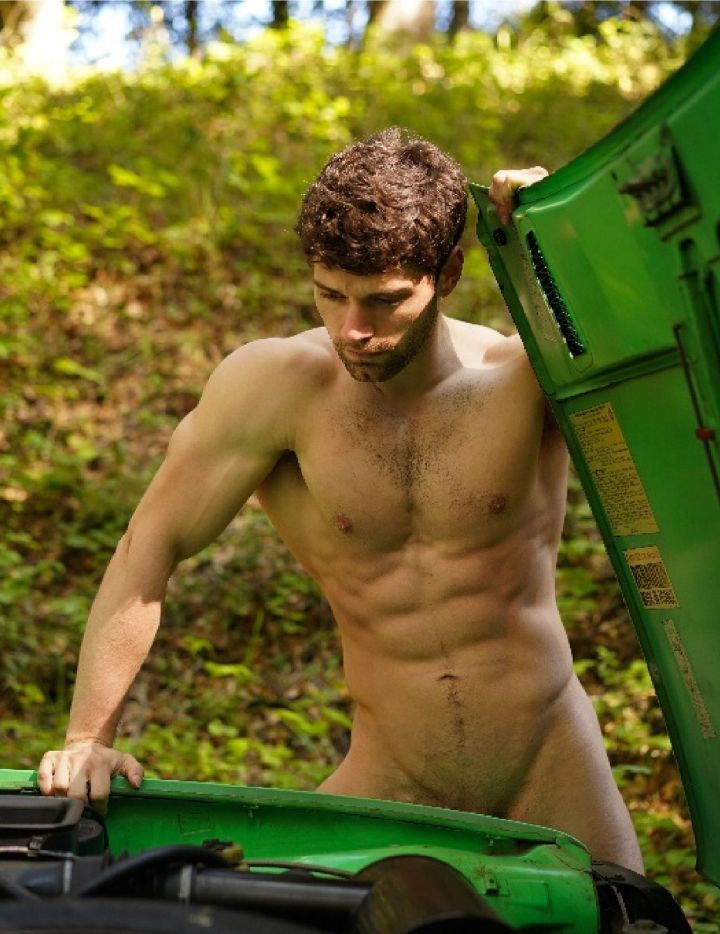 In this series, Mark captures Nicholas with a 72 Renault Le Car..  Mark borrowed the car for the shoot from one of his friends, and it's since been sold to an out-of-state collector.  Mark remembers that with no power steering, it was quite a workout whenever he drove the car.  If you're a fan of Mark's work, you may recognize Le Car which Mark was used in several other shoots over the years.

The series with Nicholas and Le Car make up the first ten or so pages of Mark's new book devoted to his work with Nicholas.  Although there time together wasn't long, with so many incredible shots and locations, there are many great views of every inch of Nicholas' and his incredible naked body. 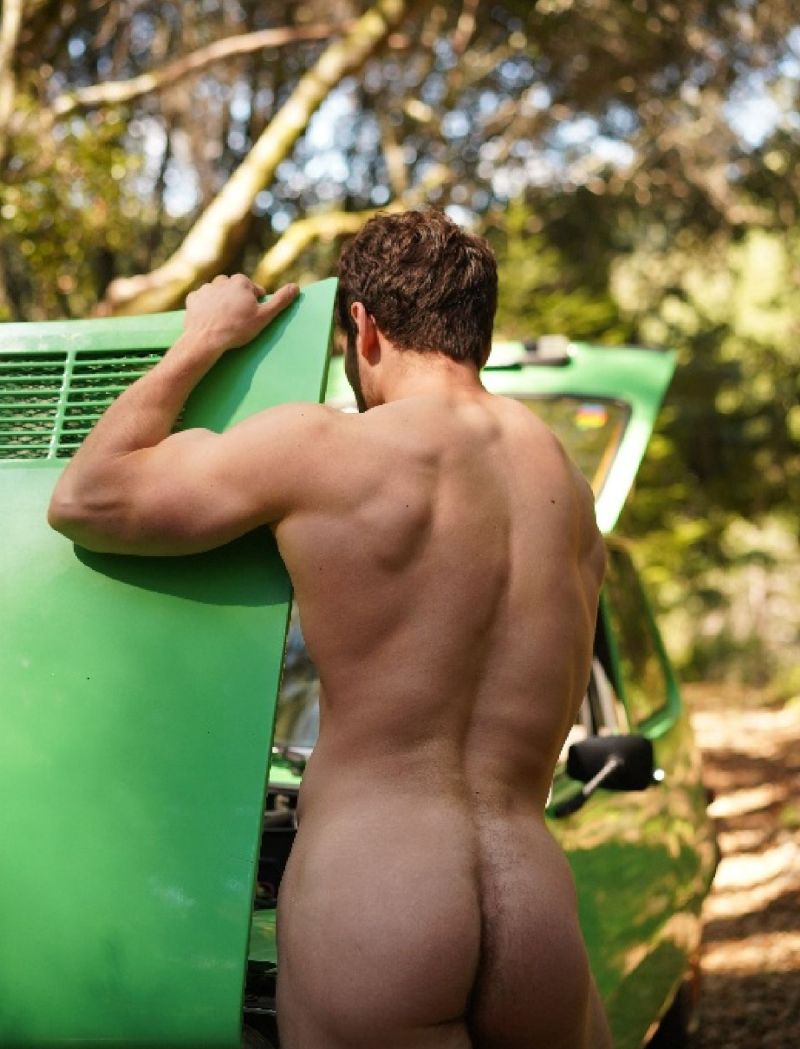 Although Mark's previously created eBook are still available for ordering, Blurb has sadly discontinued offering eBooks for new releases.  There are still options for enjoying Mark's work with Nicholas, with both a hardback edition and magazine edition available.  If you order soon, there's still plenty of time to have Nicholas under your tree by Christmas Day!  Check out Mark's site HERE: to learn more! 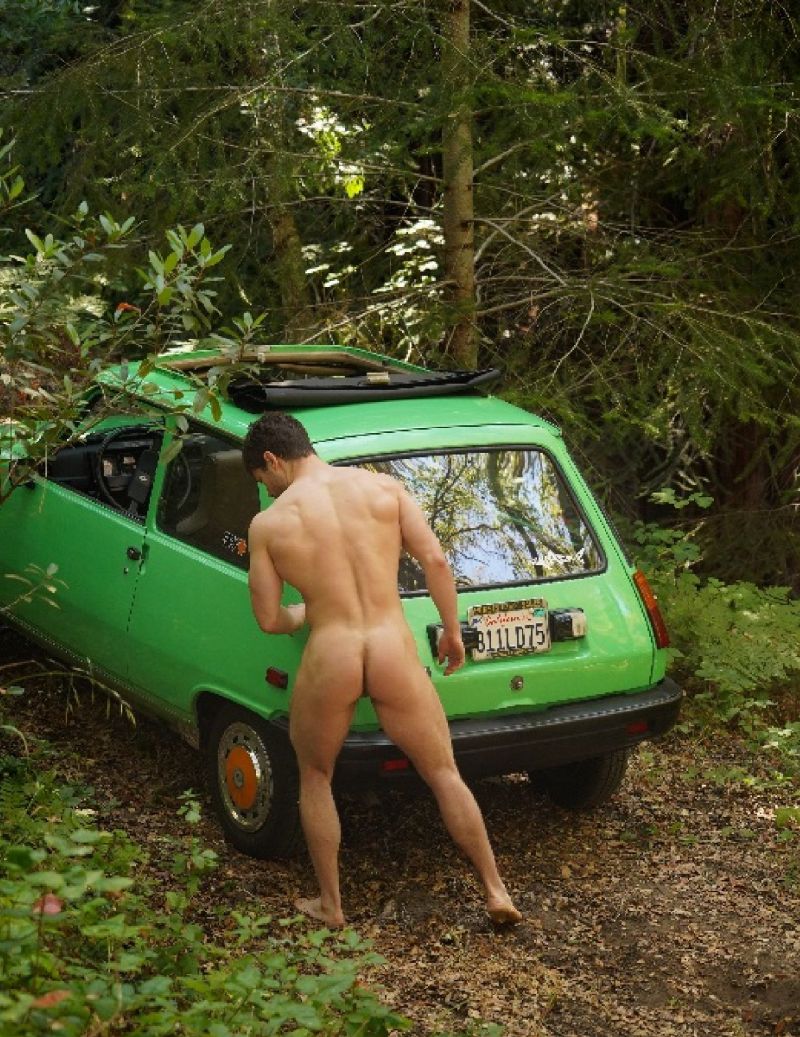 When I was first featured Nicholas, Mark predicted he was a rising star, and that proved a wise prediction.  If you follow Nicholas on Instagram, you know that since that piece last summer, Nicholas has been working steadily, shooting with a variety of photographers of the male form, and for several magazines and publications.  Mark was one of the first photogs to notice and captured the talents of the ripped, goofy, charismatic and driven young hunk.  Check out Mark's site to check out the book, and much more of their work together! 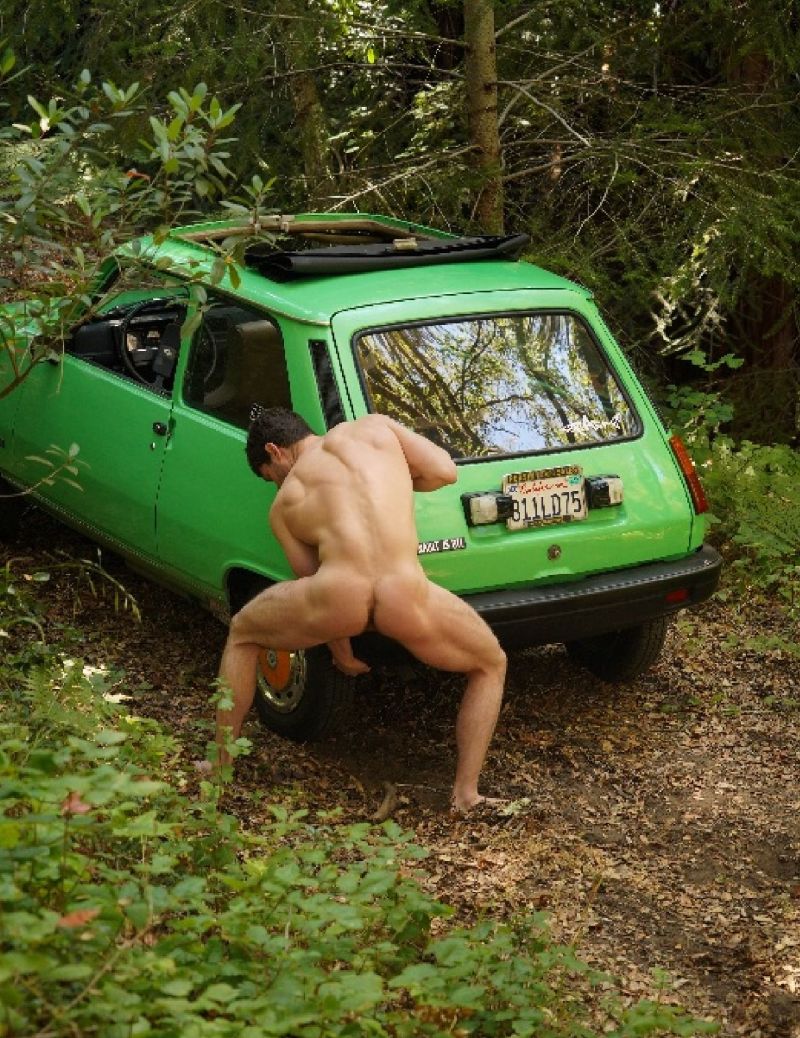 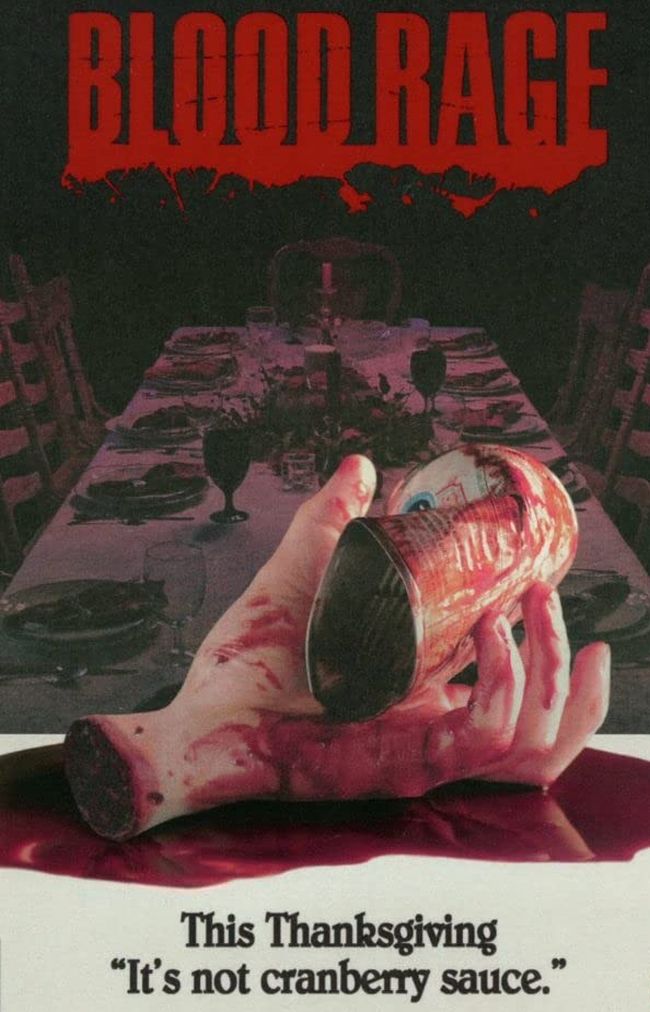 'Some things never rest in piece.' 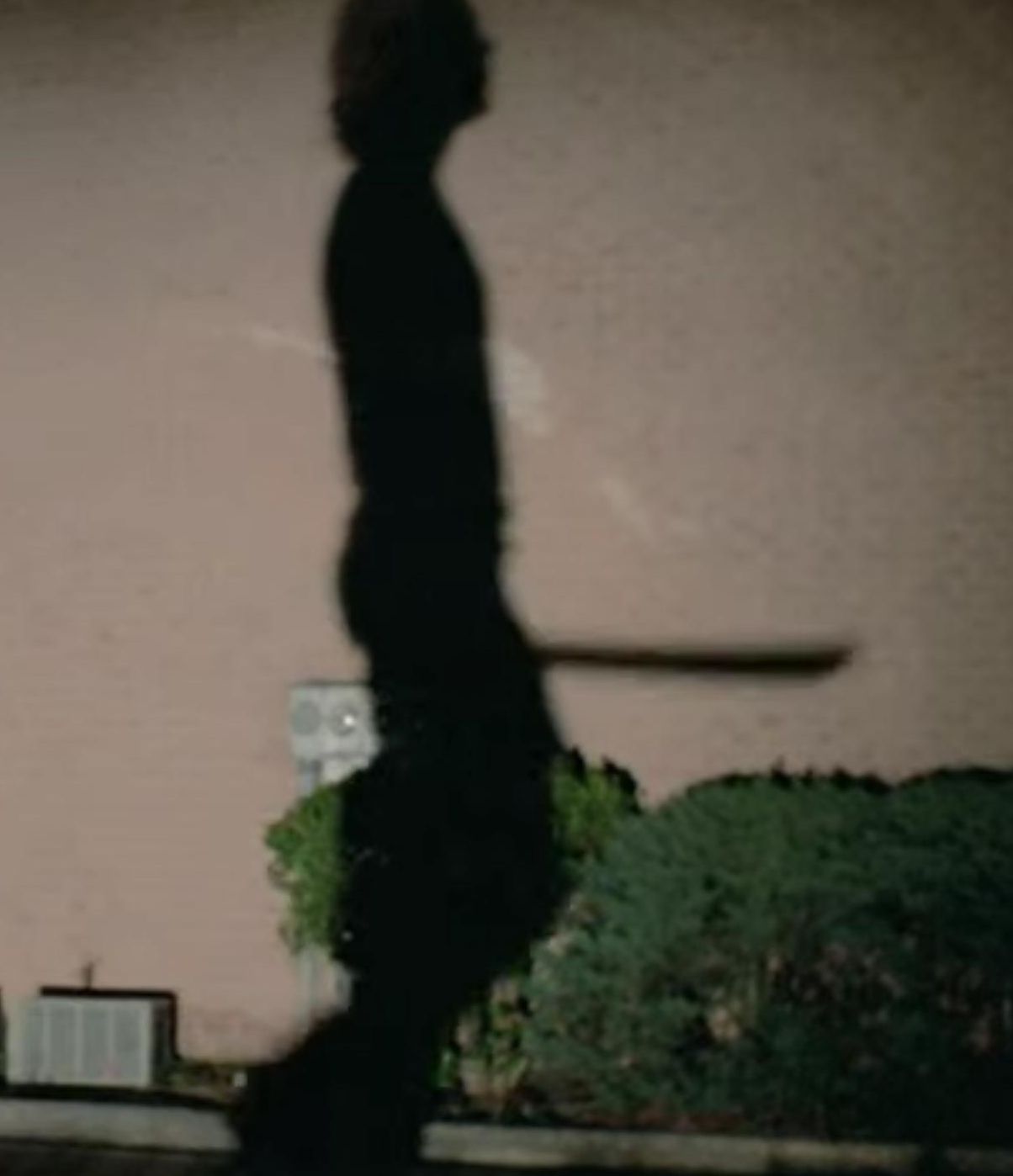 FH viewers know how much I love  to feature holiday related films.  I especially love when a family holiday is blasted into a horror film.  Although I chose to feature The Oath on Thanksgiving Day, I couldn't let this little Thanksgiving gem go without a post. 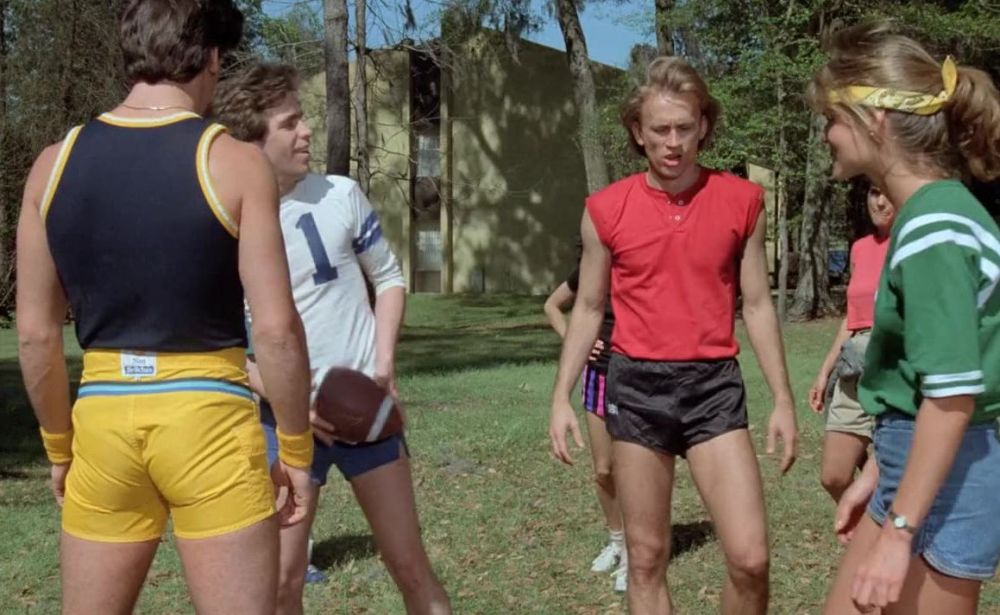 1987's Blood Rage, (Nightmare at Shadow Woods) begins with a scene of two twin brothers in the back seat of a car a drive-in.  As they go exploring, one of the brothers kills a man having sex in his car, and goes on to accuse his twin of the murder. The innocent brother ends up institutionalized, while his psychotic twin goes free.
Montgomery 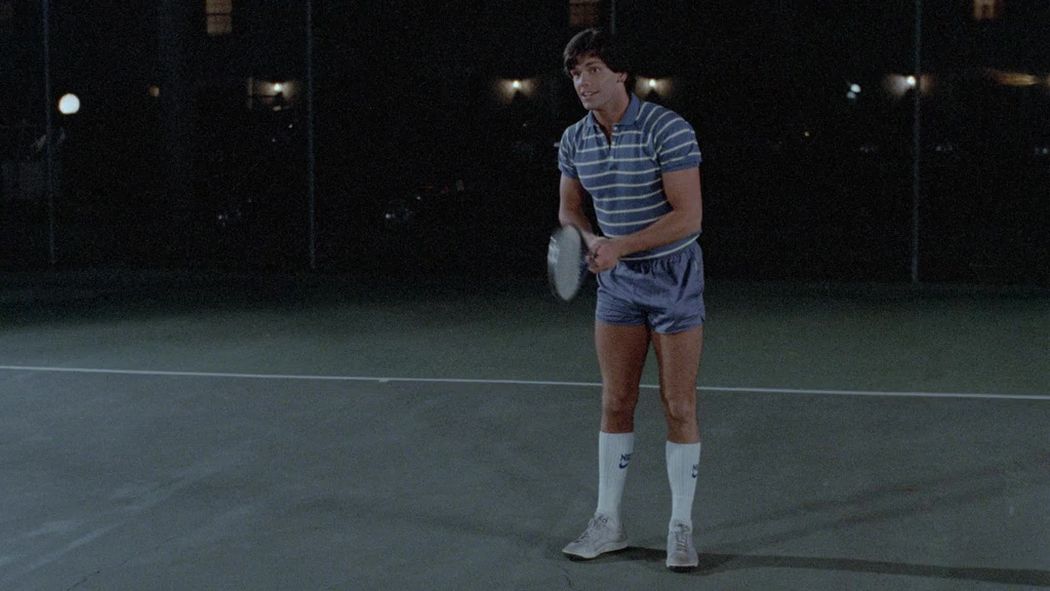 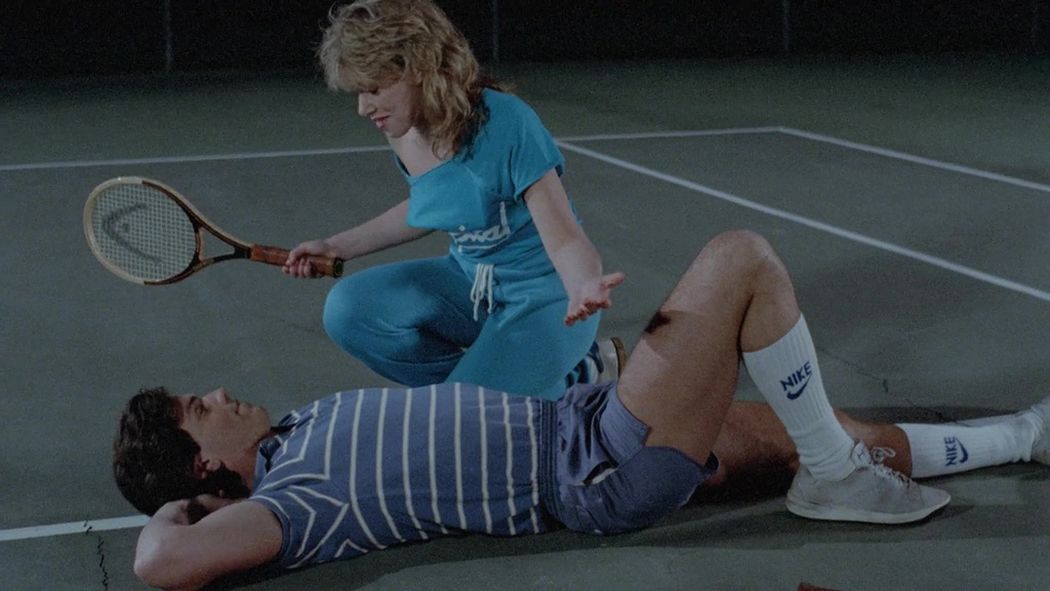 10 years later the now-adult Terry, (Mark Soper) lives happily with his mother, (Louise Lasser) in a sprawling but secluded apartment complex named Shadow Woods. On Thanksgiving Day, Terry's long dormant murderous rage is revived when his mother gets engaged to her fiancé Brad, who owns the complex. Terry also learns that twin brother Todd, whom he framed for murder a decade earlier, has escaped from his mental hospital and may be heading home. 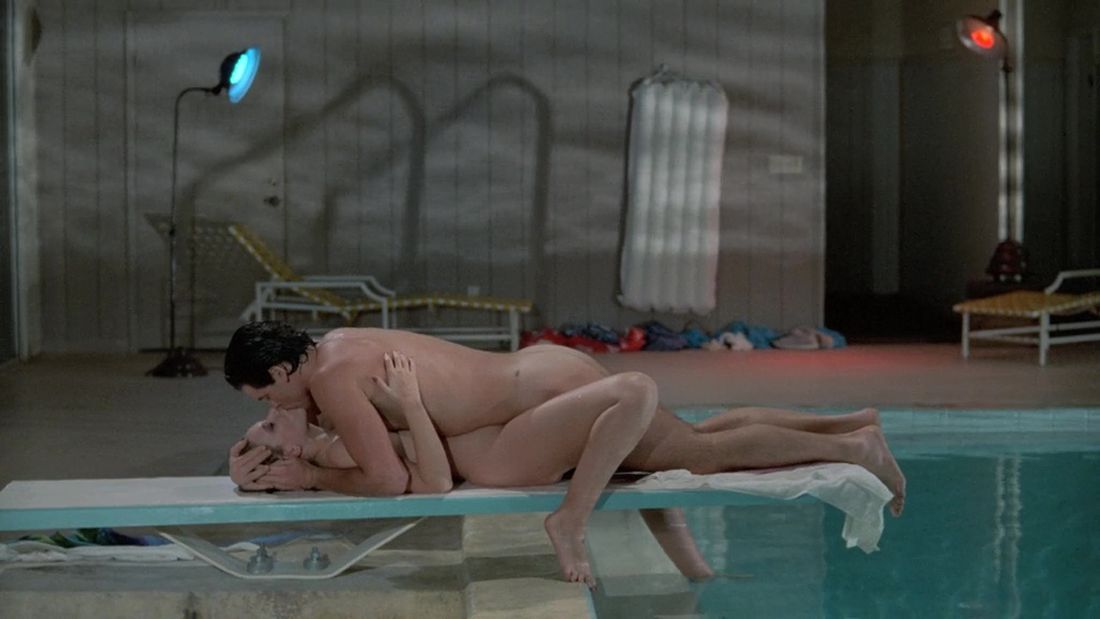 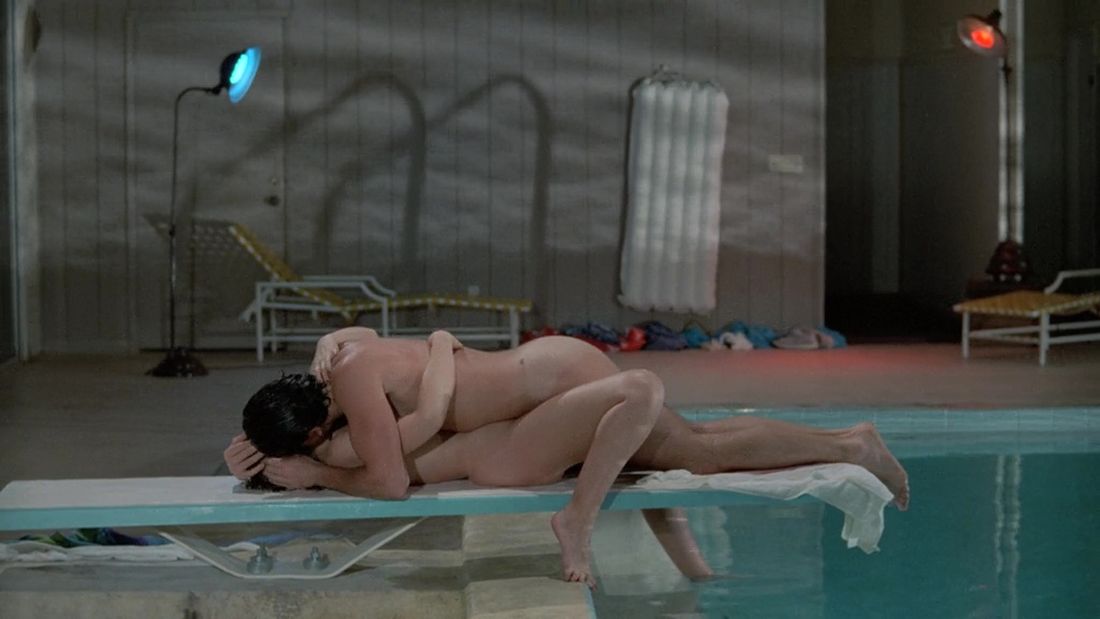 Terry murders Brad by chopping his right hand off with a machete before splitting his head. He plans on again framing twin brother Todd.  Also on Terry's chopping list, is the hot jock Gregg, (Chad Montgomery) who like Terry's original victim, gets the axe after a session of sex on swimming pool diving board. 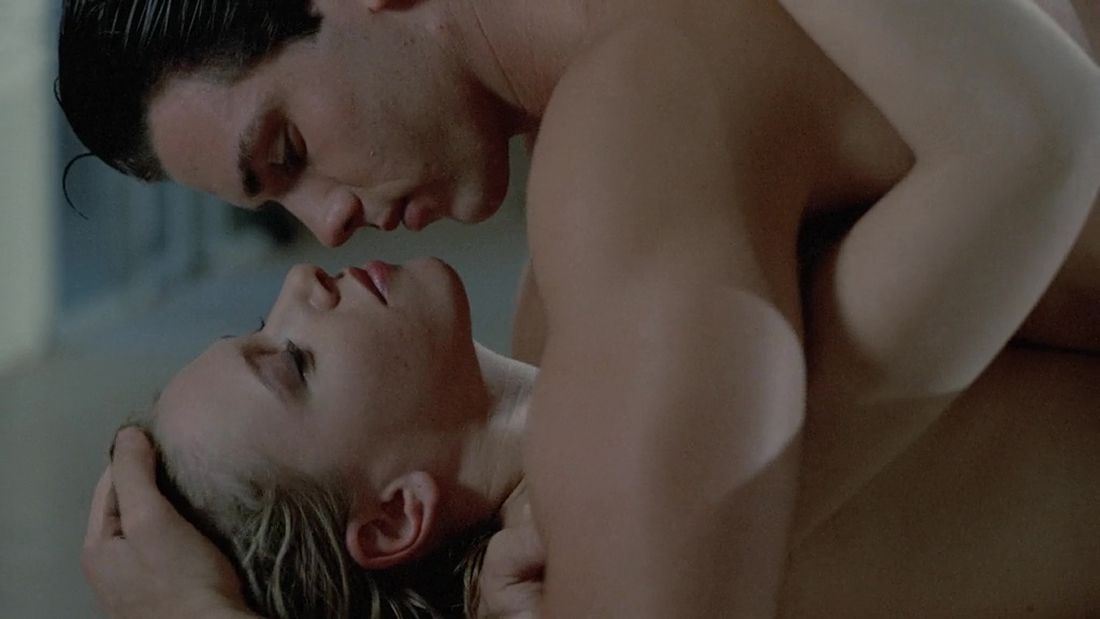 The film is campy eighties horror at it's finest, and Soper and Lasser put in perfectly over-the-top performances. The director doesn't hide the obvious phallic comparison of Terry's weapon of choice. 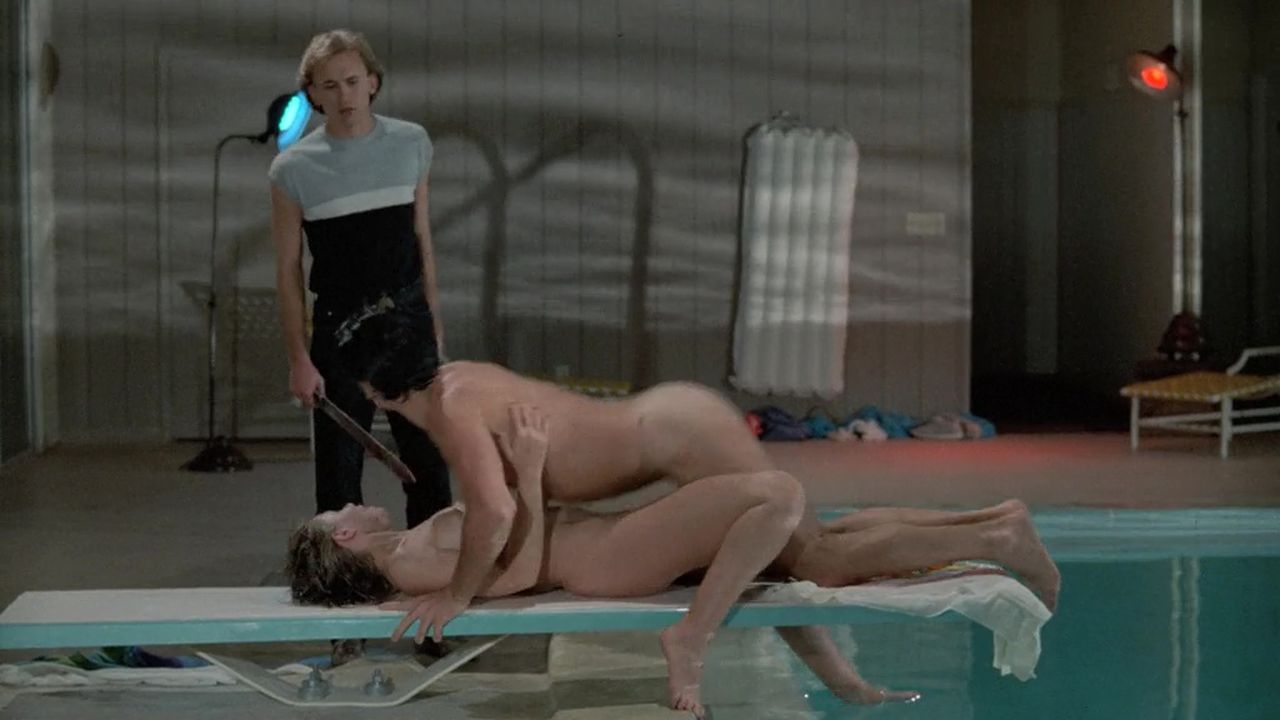 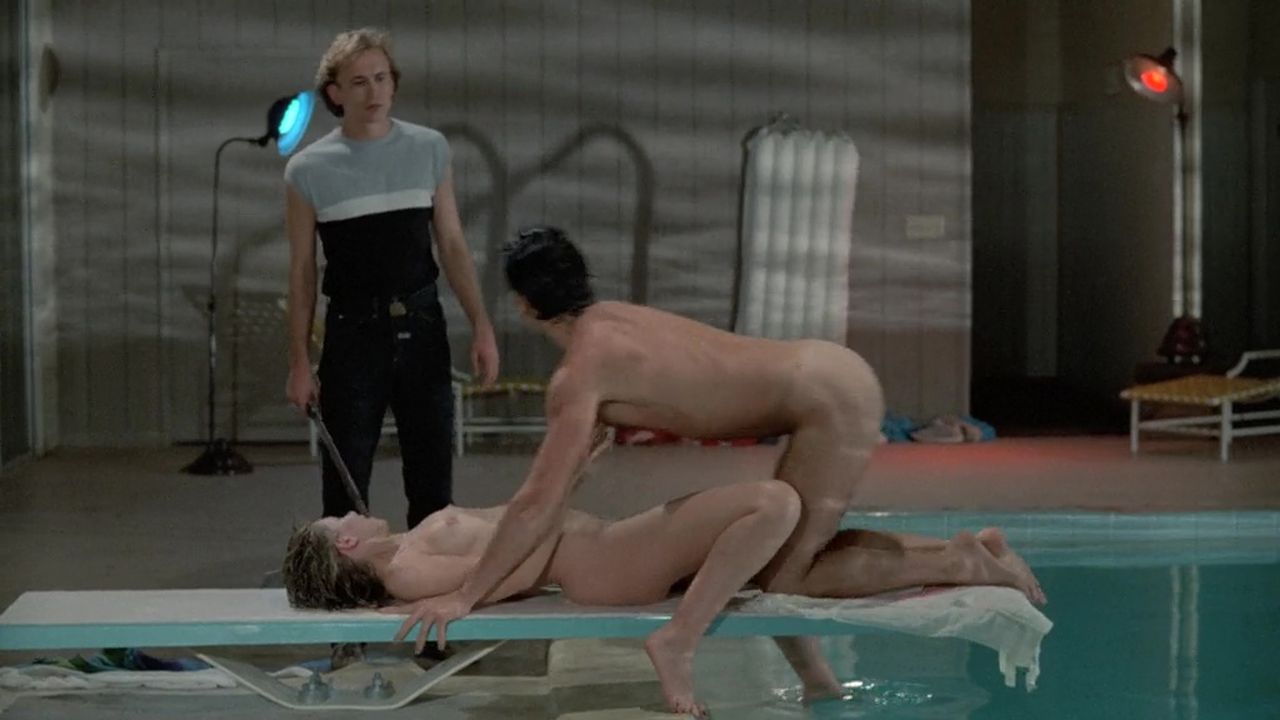 Chad Montgomery is incredibly hot, and although you don't really see too much, a brief flash of skin in a horror film is always welcome and the side view of his body and butt in the nude scene was a pleasant site.  Sadly, I don't know much more about the handsome actor, he has only three films on IMDB, with Blood Rage his first, and most well known credit. 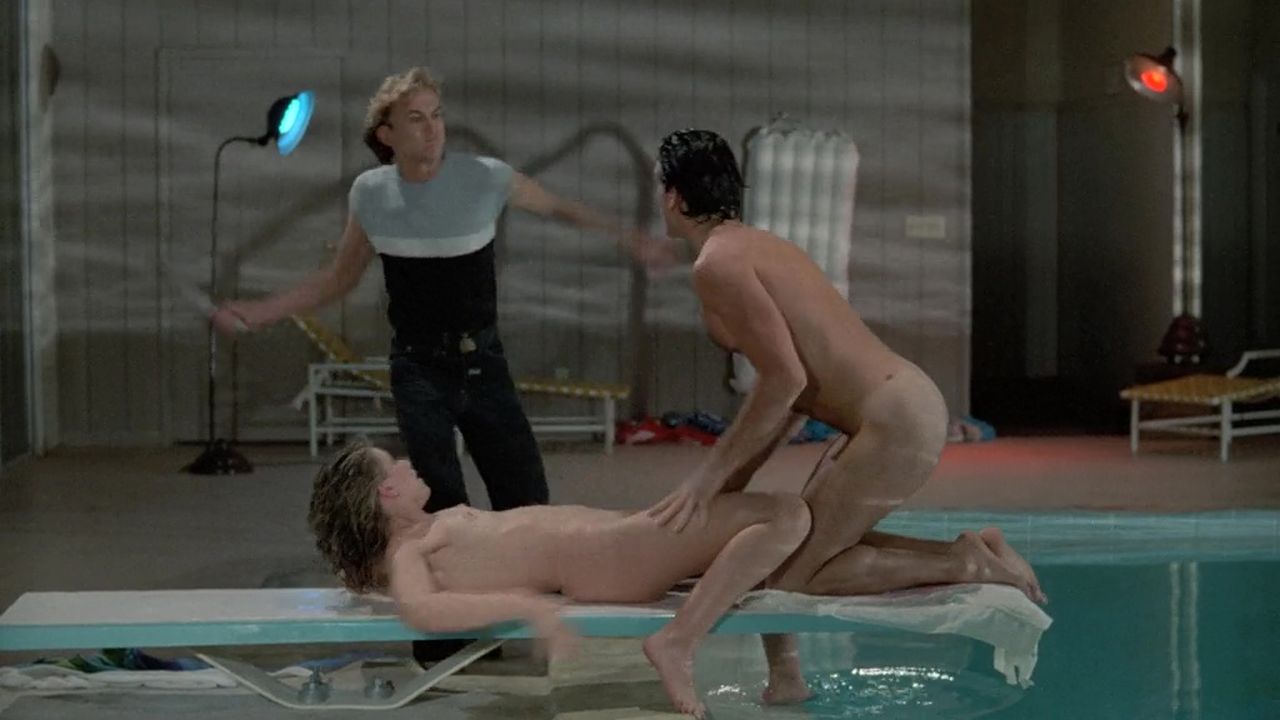 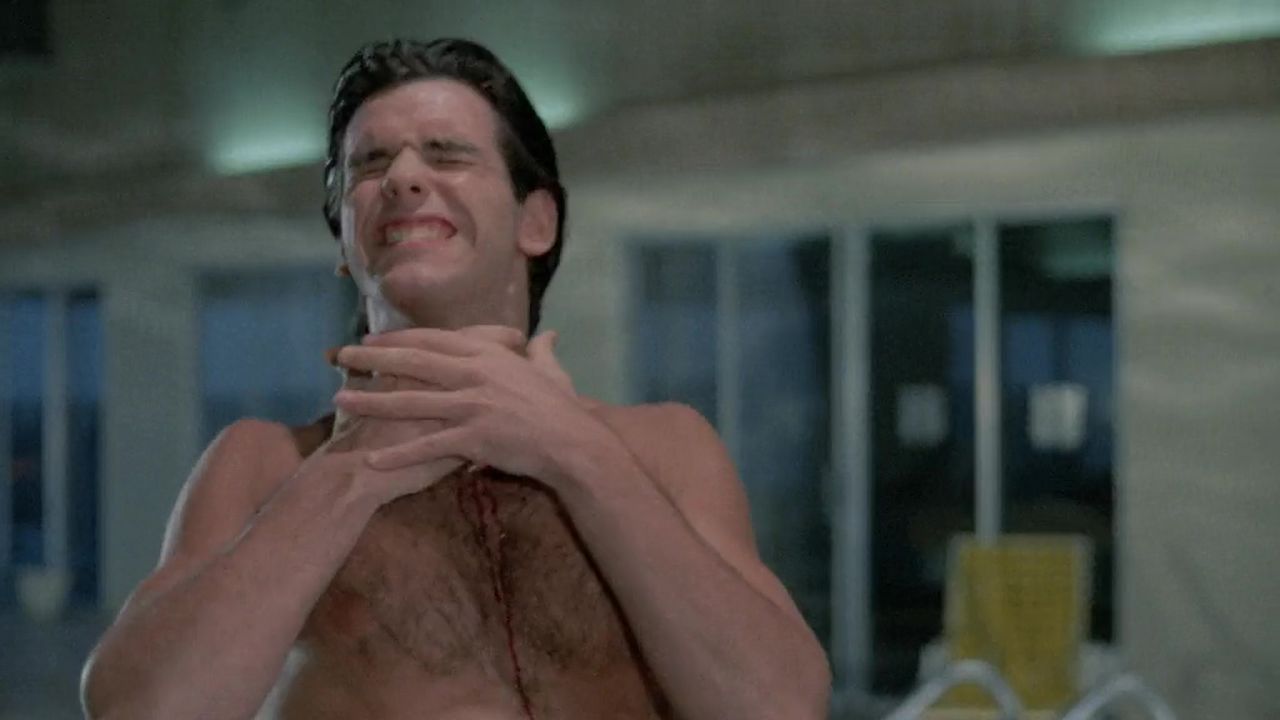 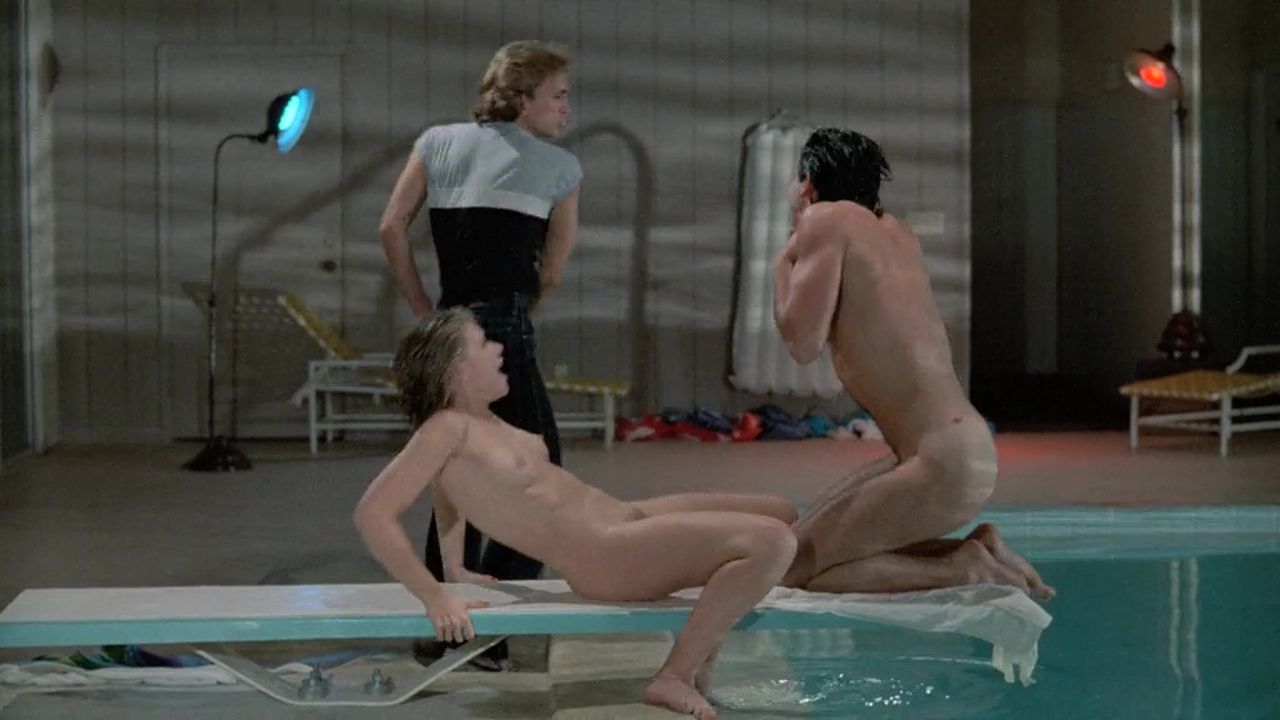 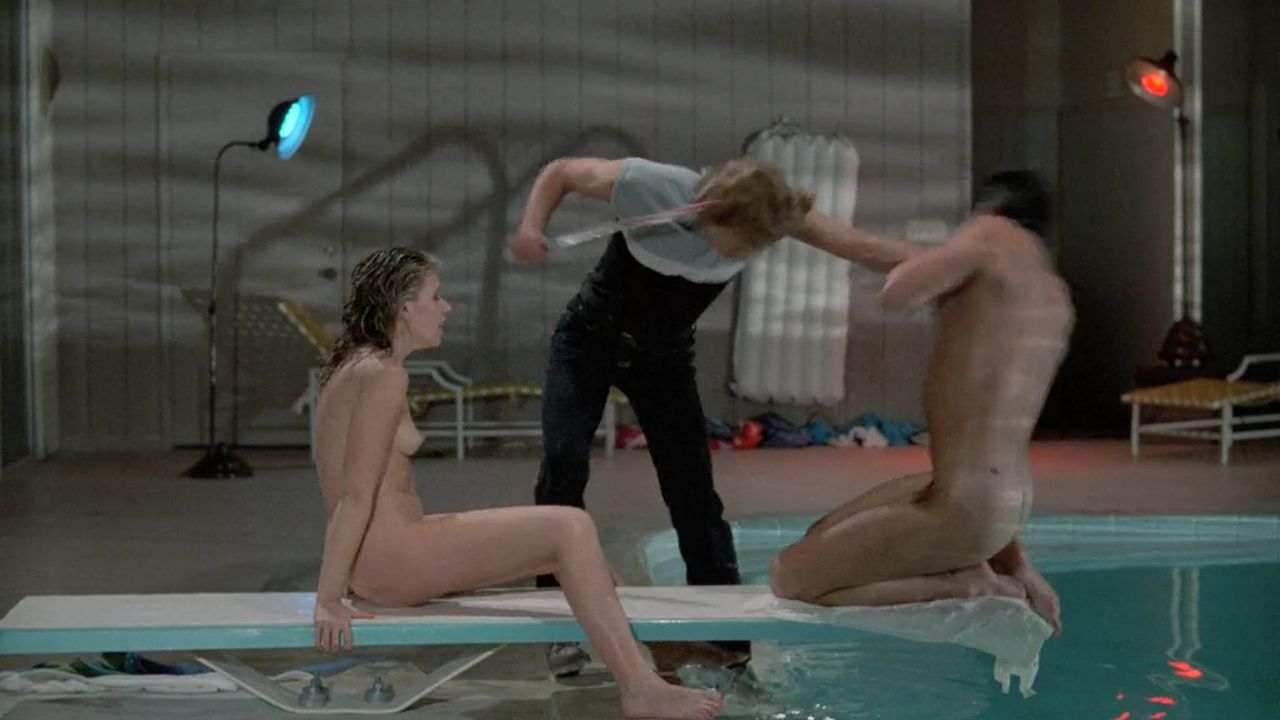 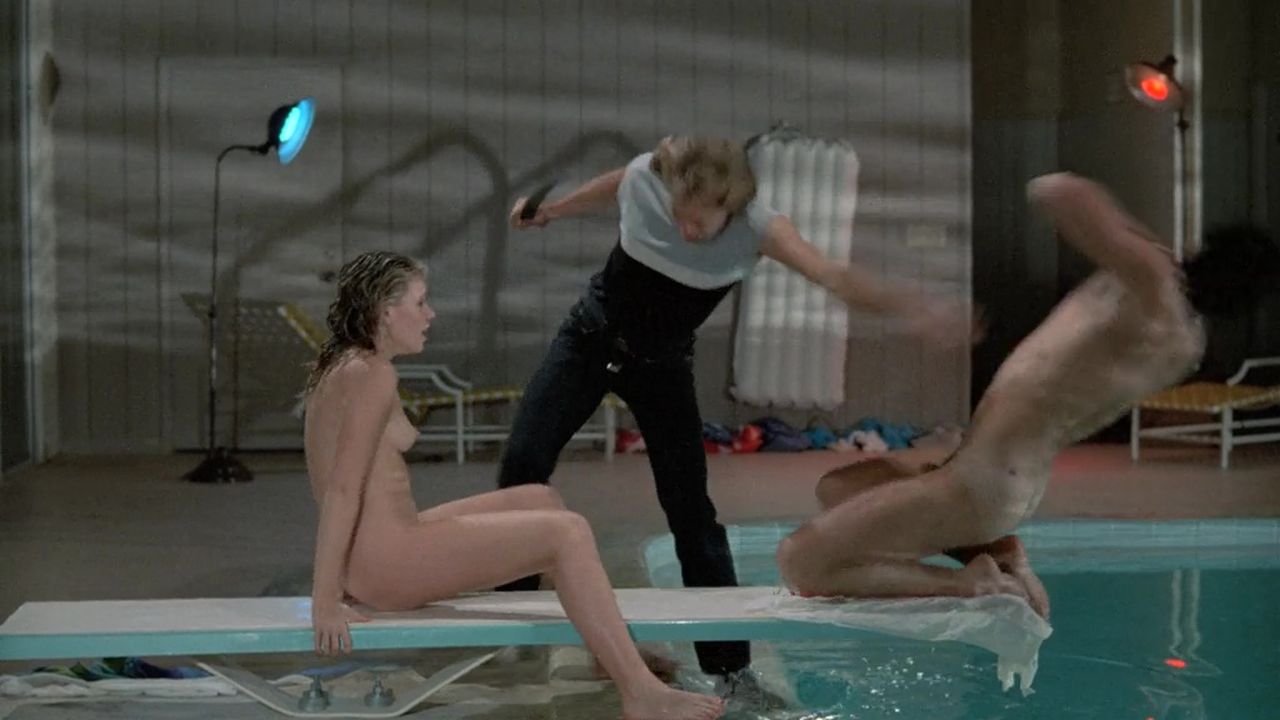