Favorite Pic of the Day for October 29th 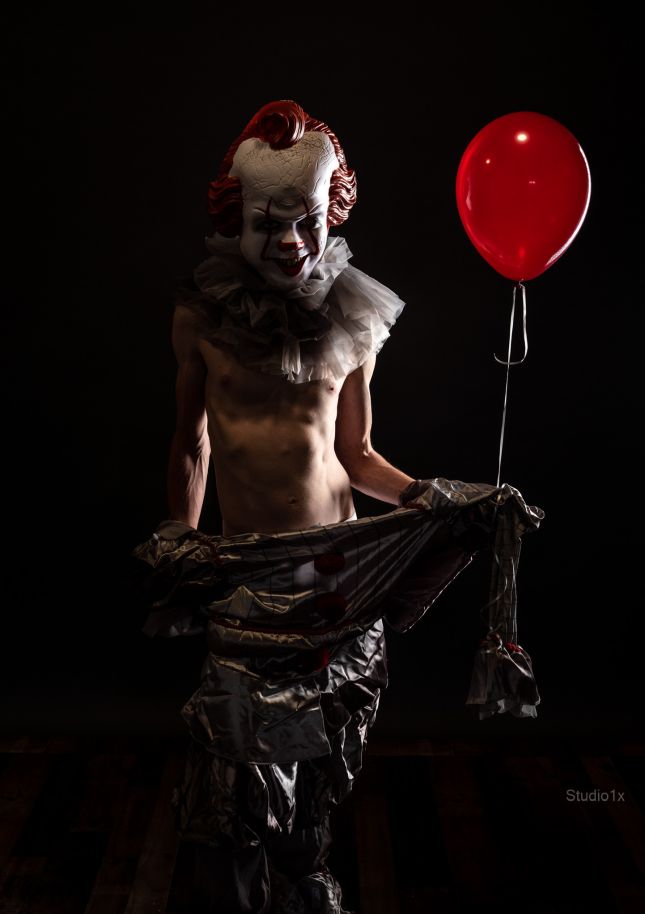 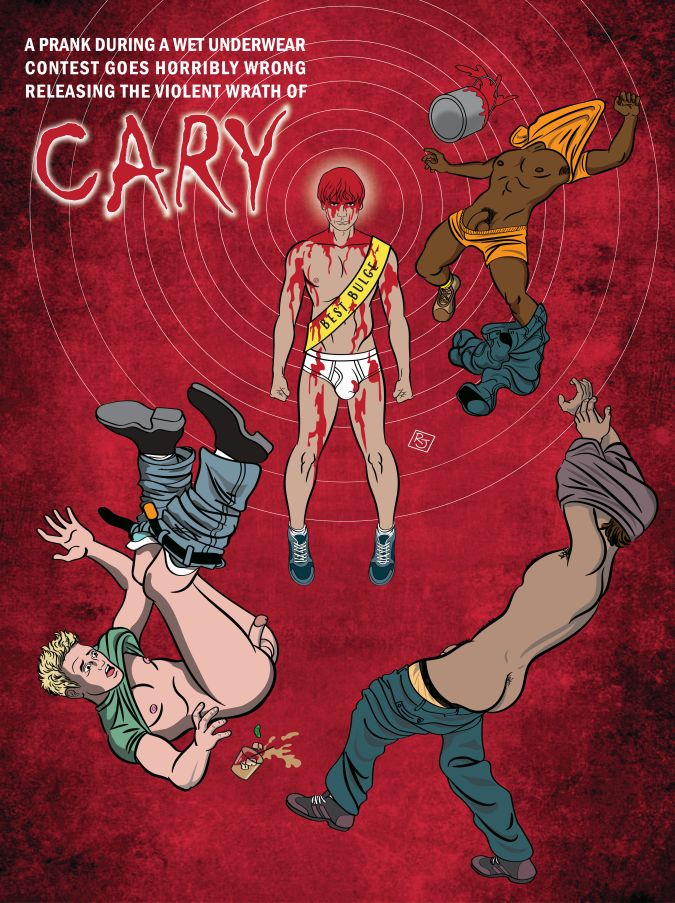 Artwork by badsign769
With HALLOWEEN just a few days away, I thought it was time to celebrate the undisputed King of Horror, writer Stephen King.  Thanks to the original work, like the art from Roy from badsign659 above, we celebrate the talented author as only FH can do!  Less blood and more skin of course!
at October 28, 2021 No comments:

Email ThisBlogThis!Share to TwitterShare to FacebookShare to Pinterest
Labels: Body of Art, Halloween 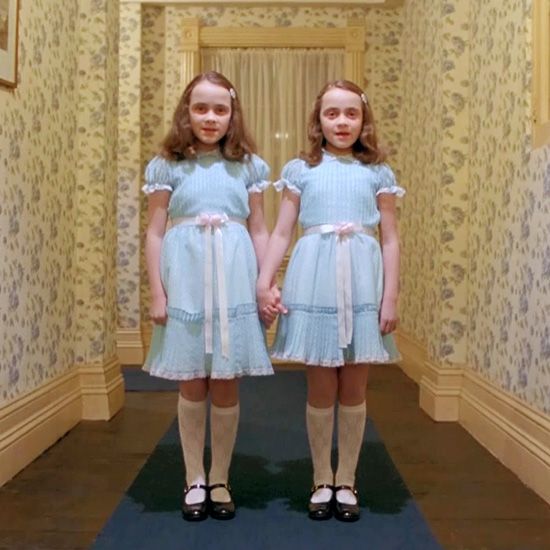 'We make up horrors to help us cope with the real ones.'
Stephen King 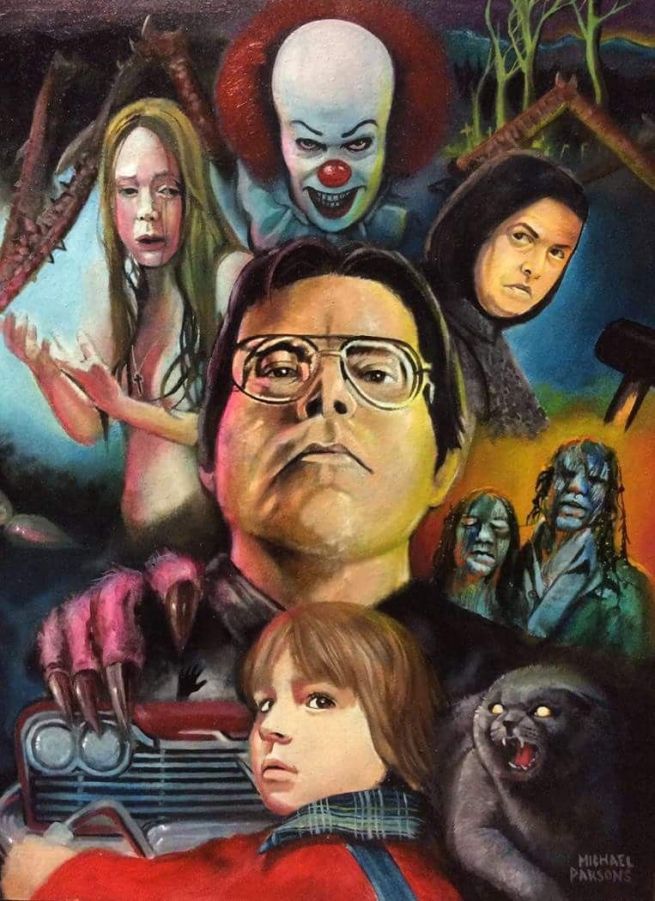 Whenever I'm asked who my favorite author is, I always answer Stephen King.  It's not that King's the best writer out there, or that I've enjoyed all of his books, I haven't.  But King's work became an important part in my life back when I was in Jr. High.  After being terrified after seeing the 1990 mini-series adaptation of IT, mostly thanks to actor Tim Curry, I was hooked on the author's storytelling. 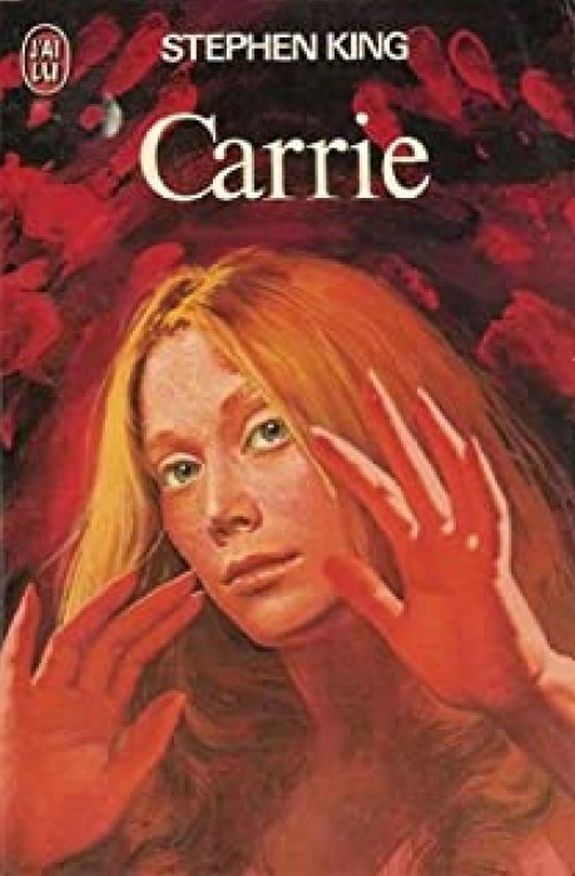 From then on, it seems I always have a King novel or short story on the go.  This past year along, I've read Later, 1992 and If It Bleeds.  This past summer, I loved and devoured the close to 600 pages of The Institute.  I just started Billy Summers and have a brand new copy of Joyland on my shelves to read next.  I haven't read all of King's books, some of his biggest sellers, like The Dark Tower and The Stand, I have yet to read.  I own them both, and started them both years ago, but they just didn't draw me in.  I know however, I will at some point pick them up and finish them. 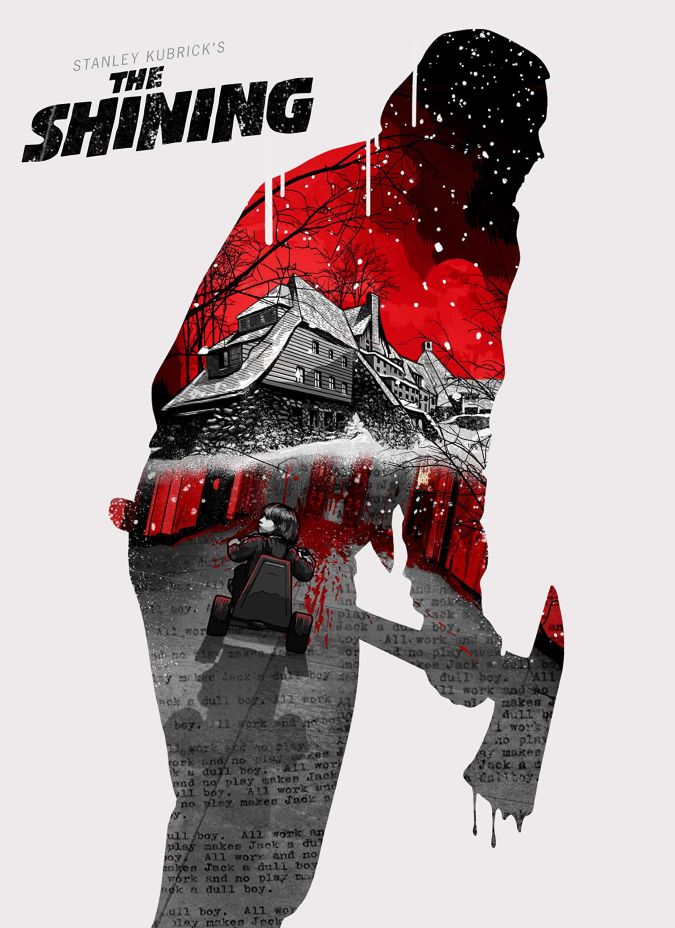 I've not loved all of King's books, some I really struggled to finish.  Although I love King's straight horror tales, I tend to be drawn more to the stories focused on human frailties and the sometimes horrific dynamics of human relationships.  I think my favorite King novels have been; Misery, IT, Pet Sematary, Thinner, Rose Madder, Needful Things and The Green Mile.  I was University, and read the Green Novel in sections as it was first released slowly in six separate volumes.. 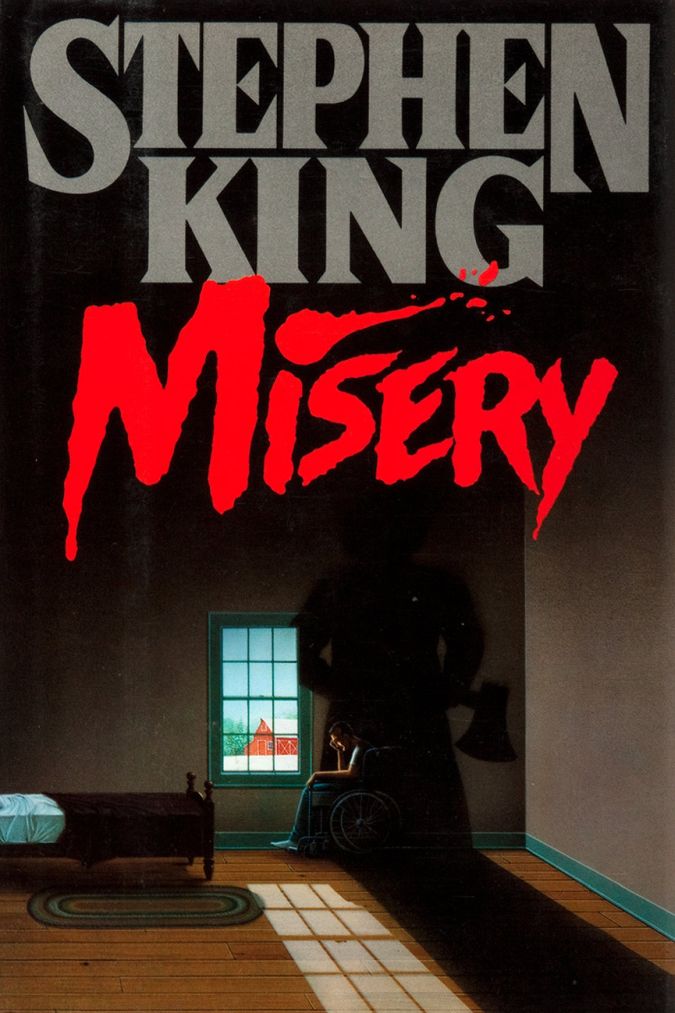 For the most part, I haven't had the same passion for most of the on-screen adaptations of King's work. Most, have been rather disappointing.  I loved the book Thinner, but hated the movie. I also loved the book Needful Things, but barely got through a Blockbuster rental of the film.  In many cases, it's because King's stories are so immense, the time limits of feature films just don't work.  For example, some of my favorite characters and stories in Needful Things were chopped for the big screen version. 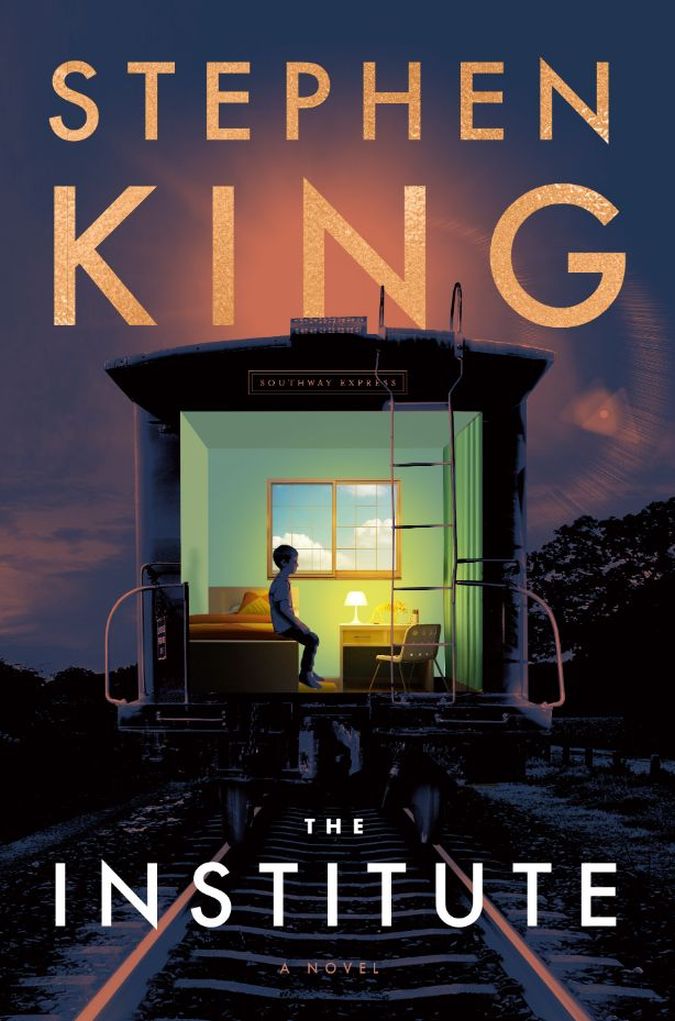 Television seems to be a better place for King. As stated, I loved the 1990 mini-series adaptation of  IT.   As far as the big screen goes, I did love Misery, Stand By Me and The Shawshank Redemption.  I also loved the original Carrie, a movie I saw on TV before going back to read the book.  With Carrie, I actually preferred Brian De Palma's 1976 film version better with the book. 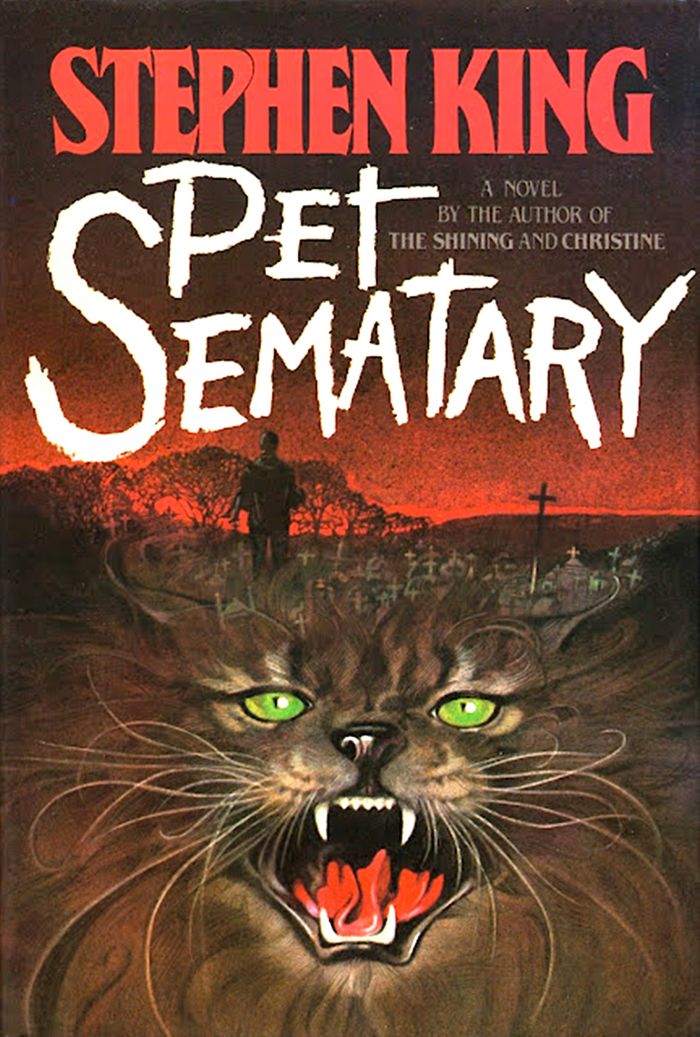 When it comes to my favorite King novel and book, I believe the answer is the same.  I don't know exactly why, but I truly loved both the novel, and the film version of King's Dolores Claiborne. I read the novel first, and loved everything about the story including the tone King set in the first few pages.  Unlike some other adaptations, I felt the Taylor Hackford directed film mirrored the novel's feel and tone from the film's get go.  I also loved the dynamic between mother and daughter played so brilliantly on-screen by Kathy Bates and Jennifer Jason Leigh. 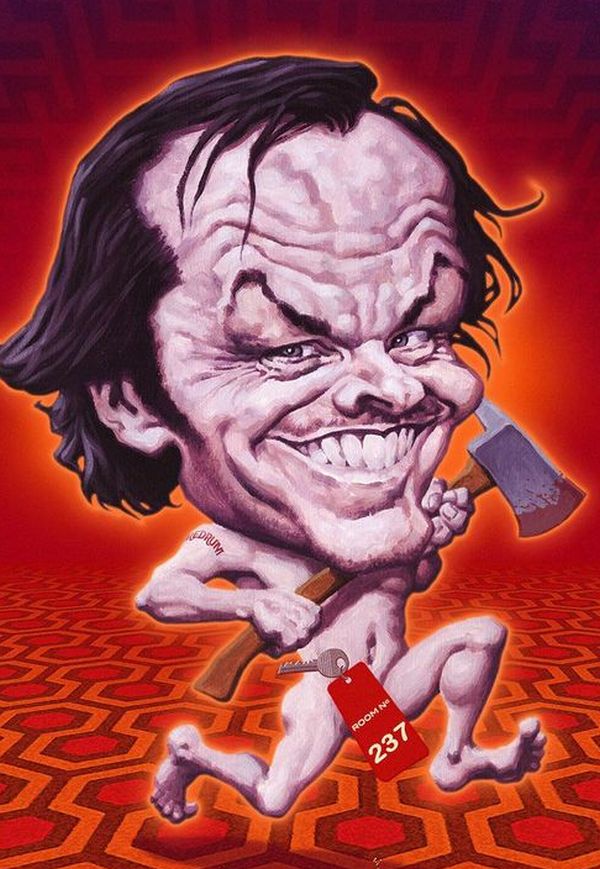 'A man’s mouth gets him in more trouble than his pecker ever could, most of the time.'
Stephen King
Daniel Hugh Kelly (Cujo) 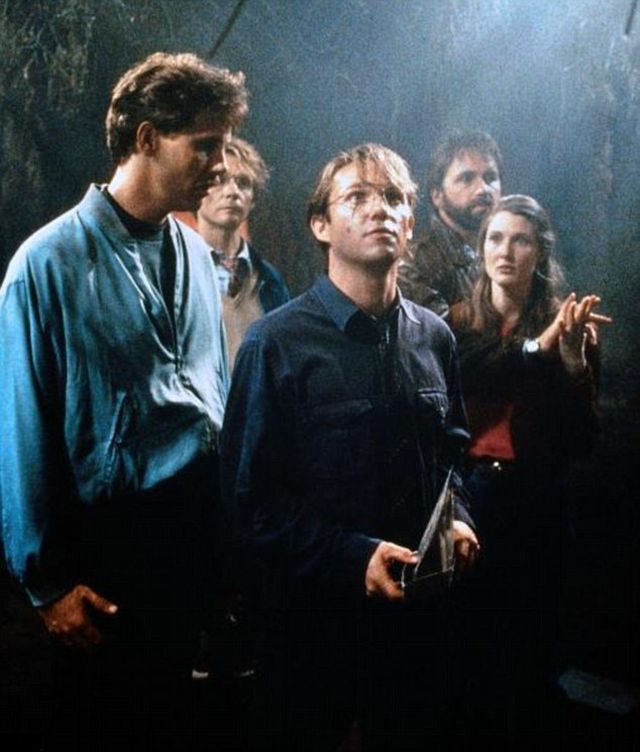 I guess in some ways that's the point.  Heroes don't often actually come in the form of a Disney Princess or a Tom Cruise character. They're real men and women, often pushed to their heroic acts not by choice, but by circumstance.  Unlike the heroes flying around in the Marvel universe, most people don't fly around looking to save the world.  Most of us in fact, work to avoid it.  But the outsiders in King's novels often speak to me on a level I instinctively connect with.  Their fears are relatable.  They're the fears that stalked us all at one point or another in our lives.
Alexander Skarsgård (The Stand) 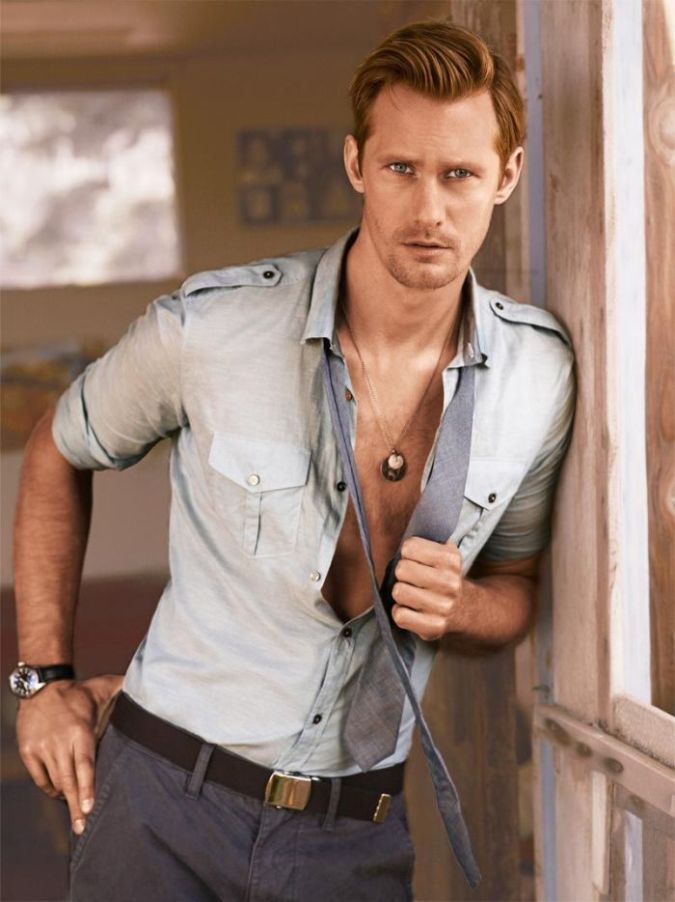 When I started looking back on the site, I was shocked at how many posts were connected to King and his projects. If not directly, they were inspired by seeing an actor or character in a King movie. They were more from moments rather than scenes. King doesn't really write a lot of erotic scenes, he seems to actively avoid it.  He also doesn't often include nudity, unless it's to embarrass or humiliate.
King's real heroes are often the children he creates and writes.  He zeroes in on their innocence, and often the traumas that occur that lead to it's loss.  In The Institute, the King novel I read this past summer, there were many scenes of with the teen hero Luke Ellis and his young friends being stripped, humiliated and probed for their captors science experiments.
James Naughton (Cat's Eye) 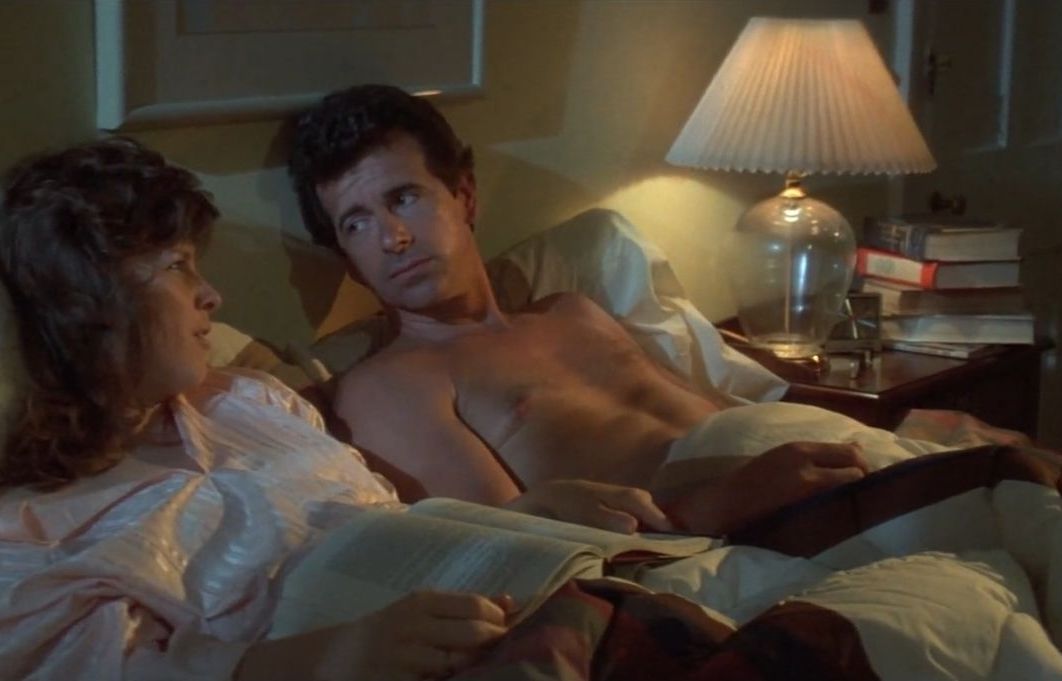 Given my comments above, you won't be surprised that there are not many nude scenes in the film adaptations of King's stories.   Most of them actually, have been the television productions produced in the last few years.  I think there has been more King inspired nudity on cable television than on film. I did find a few hunky men in my Journey through King's world, and some I first discovered due to their work in his films.  I knew who James Caan was, but really began following his career after Misery.  I hadn't heard of James Naughton, John Stockwell or Daniel Hugh Kelly, until seeing them in King films. I had to google and post about them after seeing them in Cat's Eye (Naughton) Christine (Stockwell) and Cujo. (Kelly)  Below are a list of the King inspired posts on FH plus a few new ones created for today's tribute to King.
John Stockwell (Christine)

Directly from King:
A Return Trip to Castle Rock
Bill Skarsgård: The IT Factor
Andy Bean in IT: Chapter 2
Ewan McGregor in Doctor Sleep
Alexander Koch: Under the Dome
A Look Back at IT
Inspired by King:
Jason Bateman: Time & Place
Daniel Hugh Kelly in Cujo
David Keith: Actors & Skin
Bruce Greenwood: Actors & Skin
James Naughton: Blast From The Past
John Stockwell: Blast From The Past
James Caan in Rabbit Run
Charles by Revolt Visuals
David Strathairn (Dolores Claiborne) 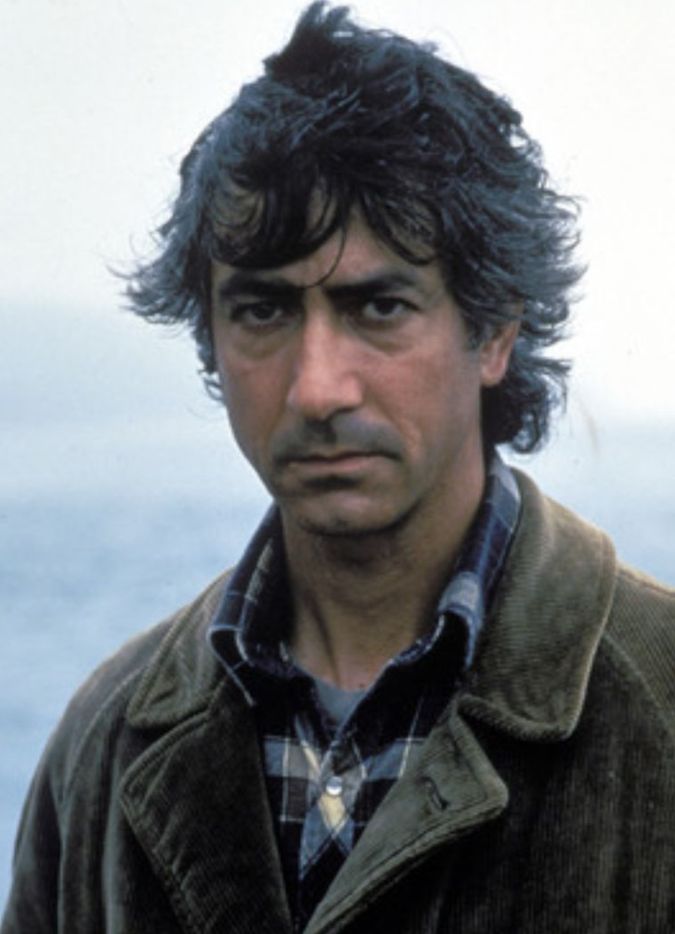 In addition to the pieces above, I also created several new pieces celebrating some of my favorite of King's Main Men:  Check out:
Kings & Queens
Nudity in King films of the 90's
Alexander Skarsgård in the Stand.
David Strathairn, Actors & Skin (HERE: & HERE:)
and the King of King's, Jack Nicholson: Actors & Skin
Jack Nicholson (The Shining) 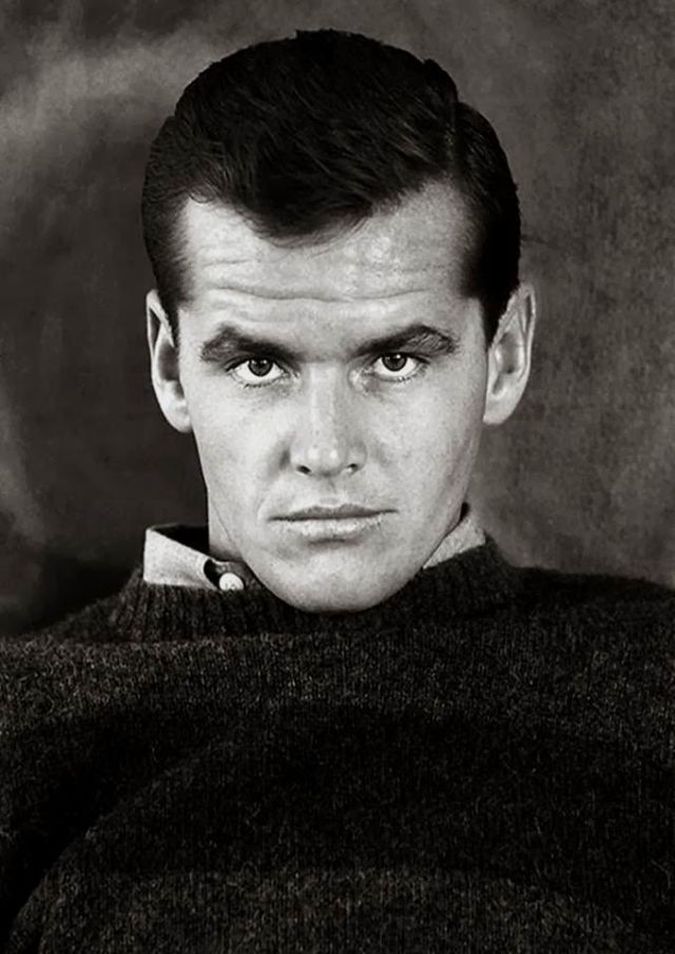 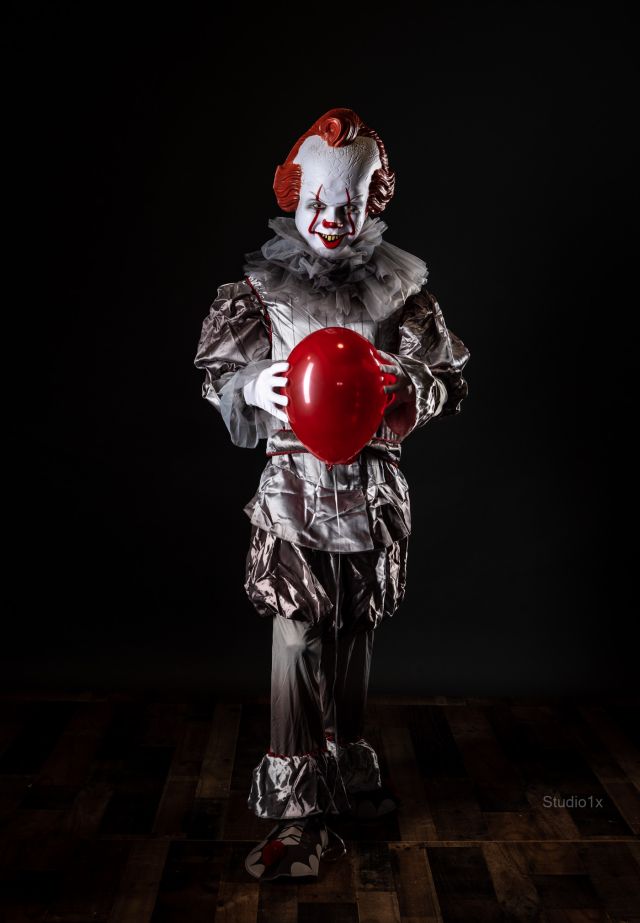 'I'm every nightmare you ever had! I am your worst dream come true! I'm everything you ever were afraid of!'
Pennywise, IT 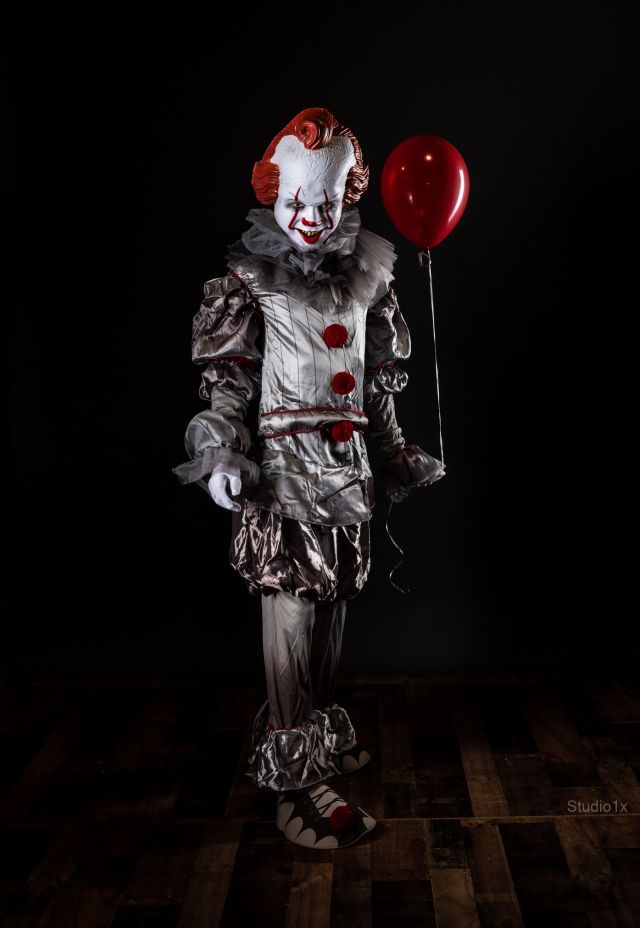 Last Halloween, I wanted to spotlight an iconic character from the realm of horror.  I chose American Psycho's Patrick Bateman, Demon Butcher of Wall Street. A devoted an entire day to the characters and some of the actors who played him on film and on stage. (HERE:) The highlight, was the skill and  creativity of Jim from Studio1x who with the help of model Luke, brought the bloody Bateman to life, chainsaw and all. 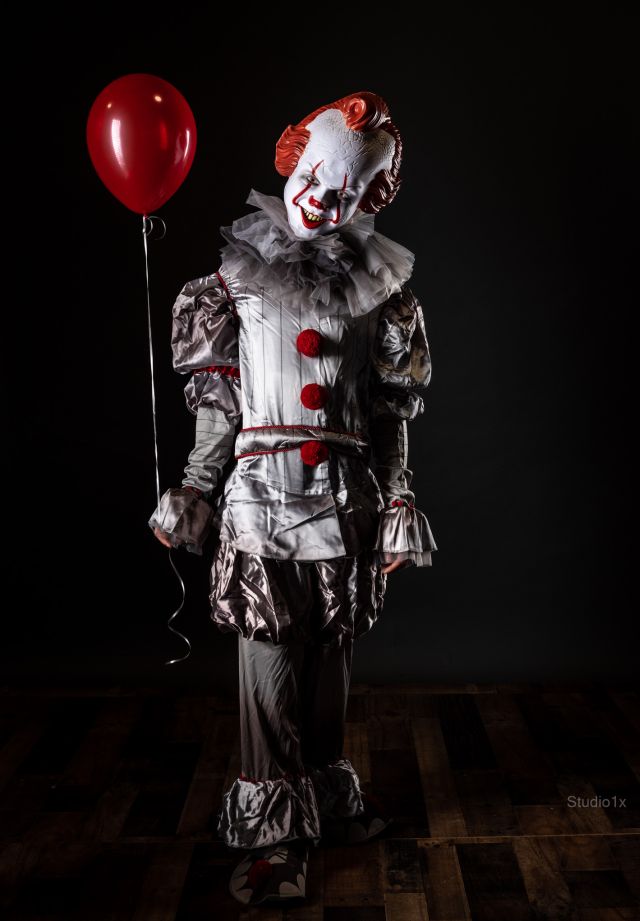 This year, it was Jim who chose the iconic portrait of terror to bring to life.  Pennywise is one of Stephen King's most terrifying symbols of evil, and IT was my introduction to King's work. I was in Jr. High when I saw the 1990 mini-series based on the novel.  It had a nightmarish impact.  Actor Tim Curry was brilliant as Pennywise, and the production remains one of my all time favorite King adaptations. I've previously featured the mini-series and it's cast HERE: 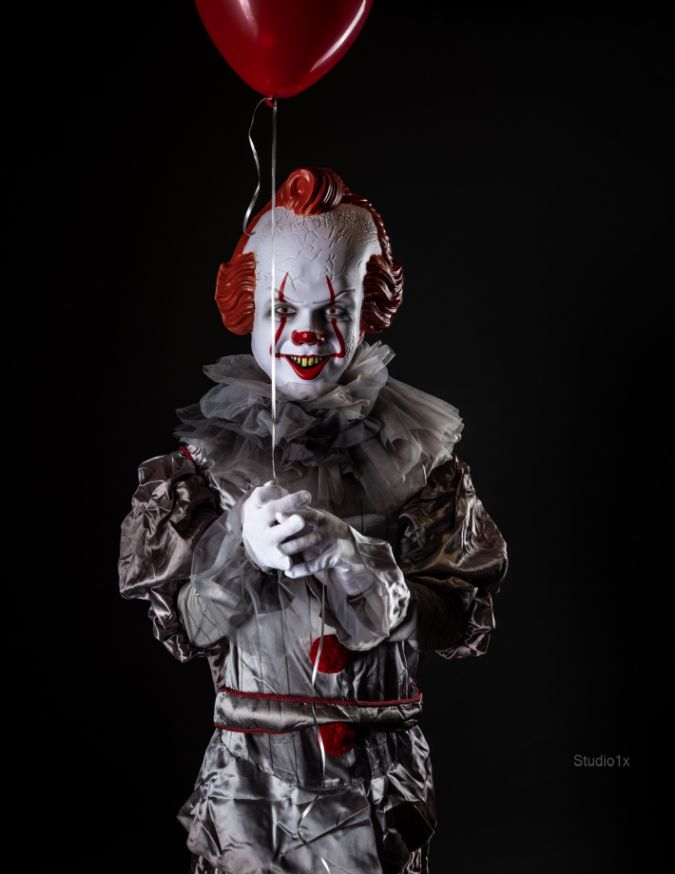 The mini-series not only cemented my crush on Jonathan Brandis, it also inspired me to go out and buy the novel.  As scary as I found the movie, the book was far worse.  As much as I loved it, I found that I could only read it during the day and in small doses. I had to stick it in my bureau drawer at night as even seeing the cover freaked me out just a little. It did however, being my love of the work of Stephen King, especially his books.  From this point on, a Stephen King book was pretty much always on my nightstand. 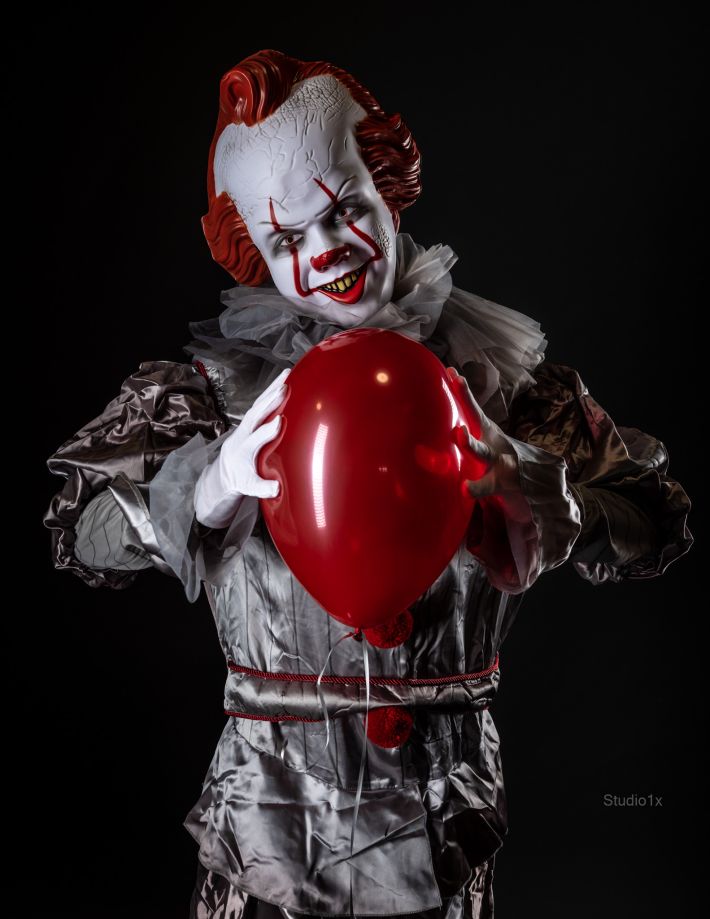 Jim wasn't aware of my connection with Pennywise and IT, nor had he ever read the book.  Jim was however, introduced to Pennywise while watching the first part of the recent film version. It was on a flight however, and Jim never got to see the ending.  Still, as you can see from these images, the creepy clown certainly made an impact. 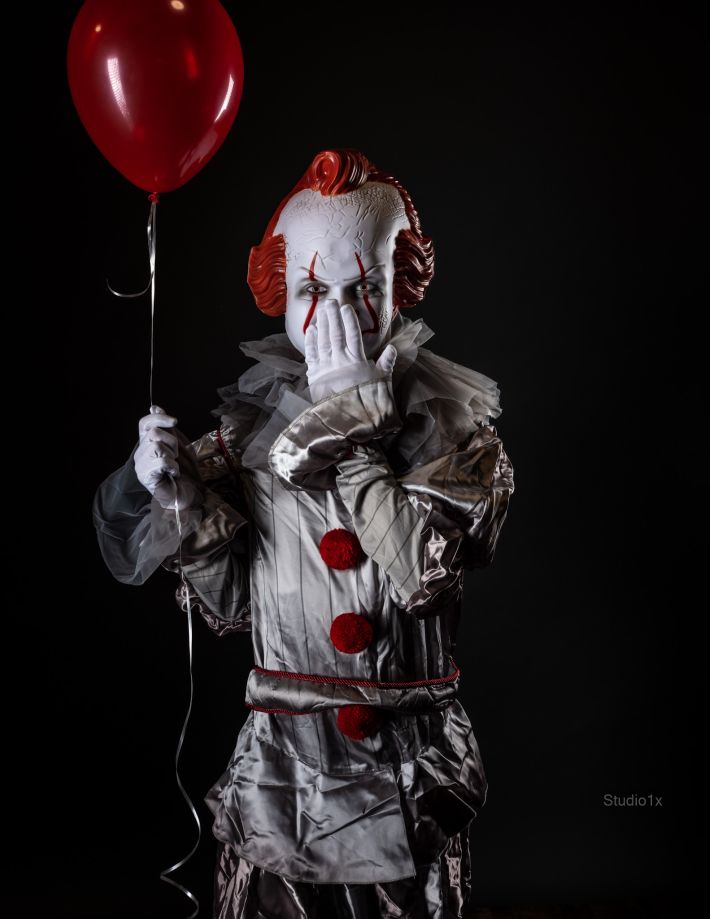 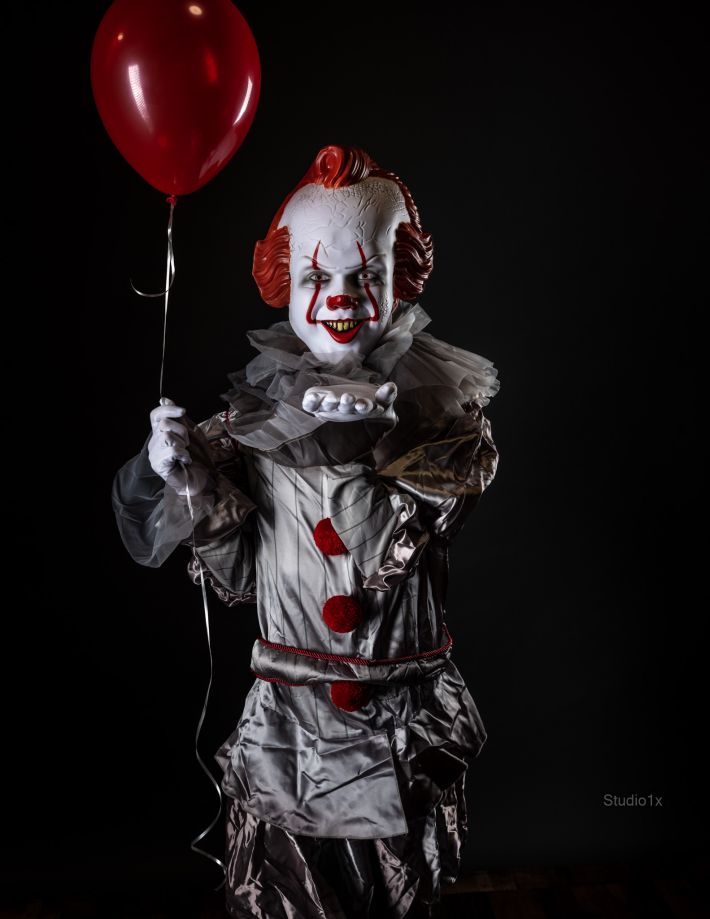 'Pennywise just came to life the moment Jonathan put on the mask. It was fun to see it all come together. '
Jim, Studio1x 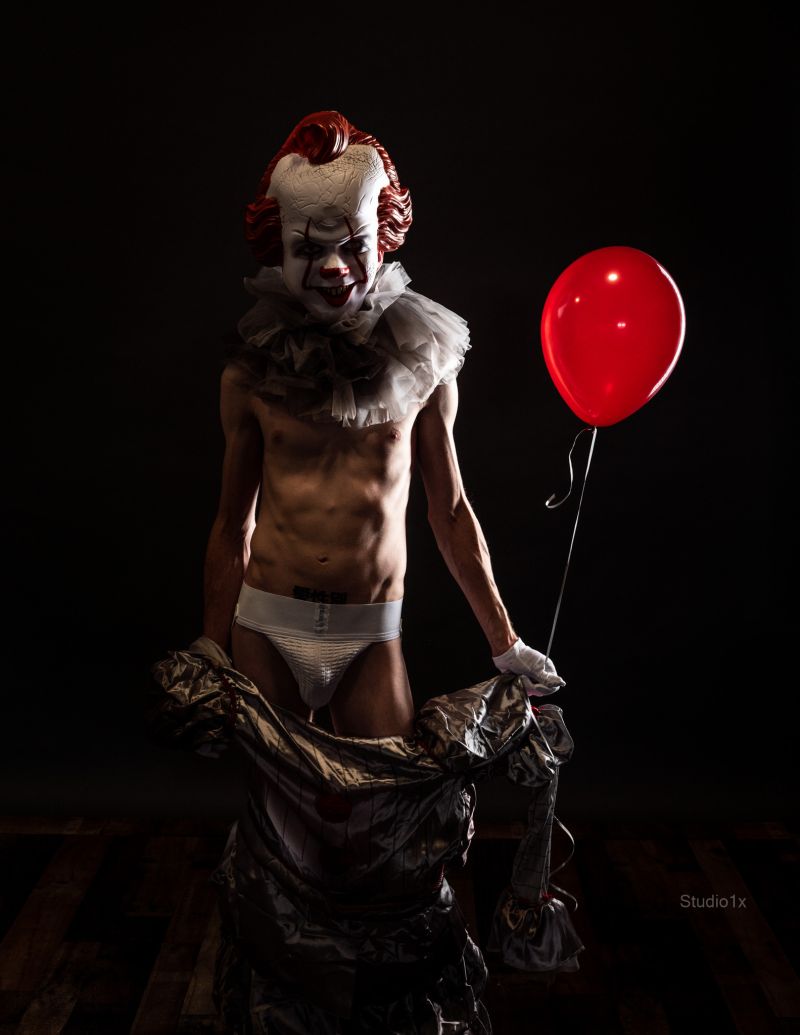 To see read more about Jim and Jonathan's process of bringing Pennywise to life, and to see Pennywise de-clowned and de-clothed, check out the NEXT PAGE: 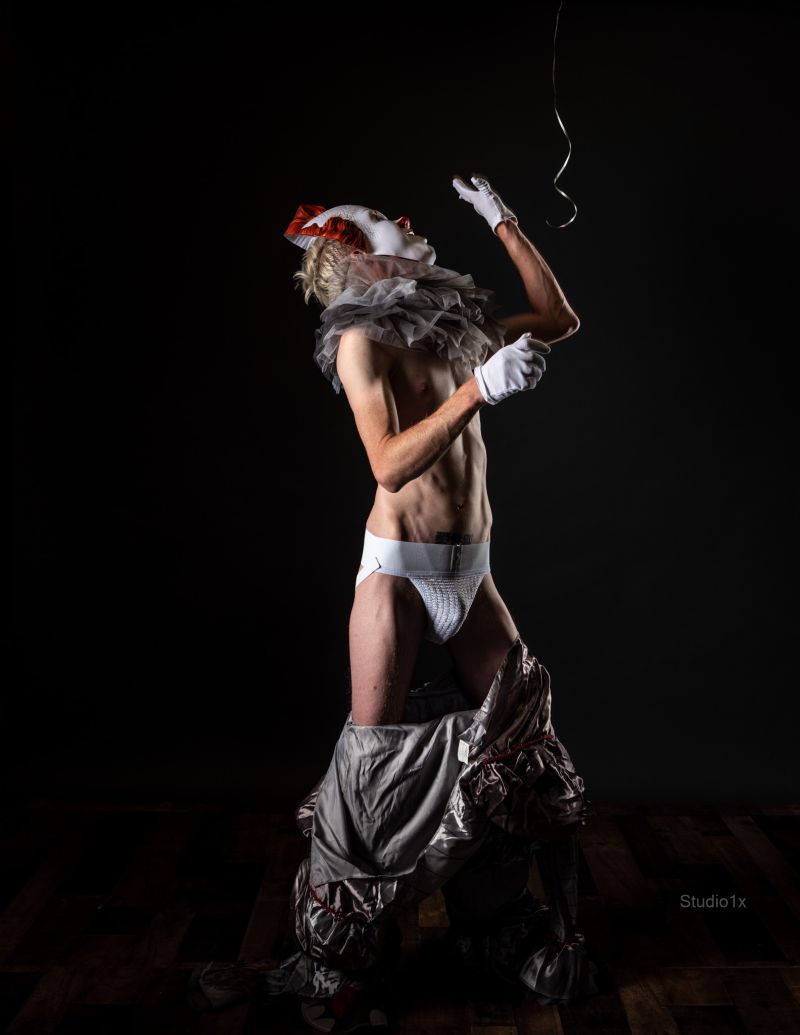 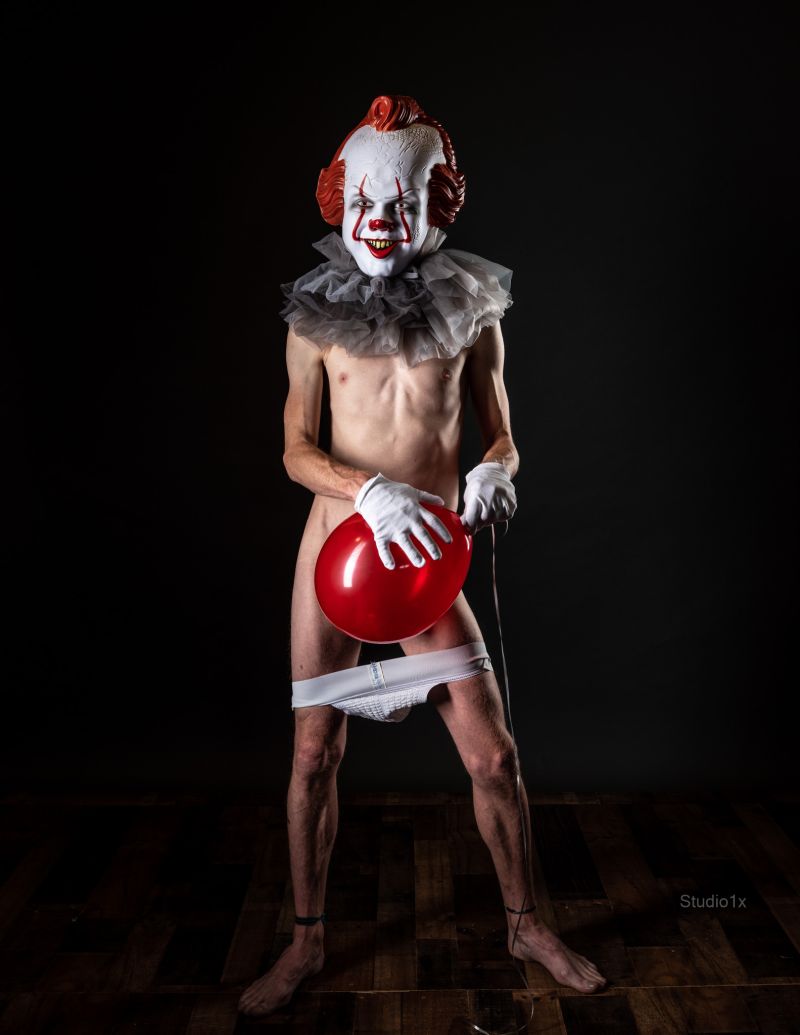