Favorite Pic of the Day for March 11th 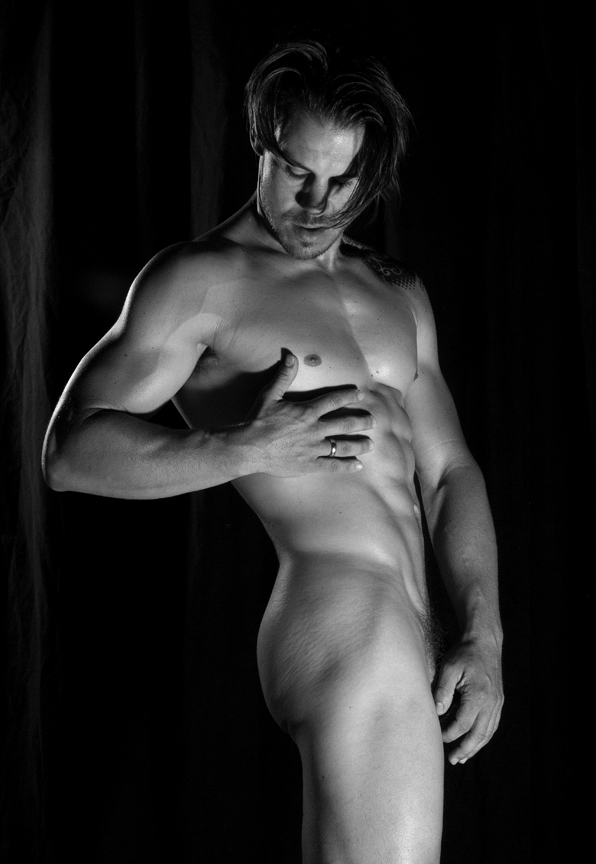 Above:
PDXAndyJ by Jeff Palmer 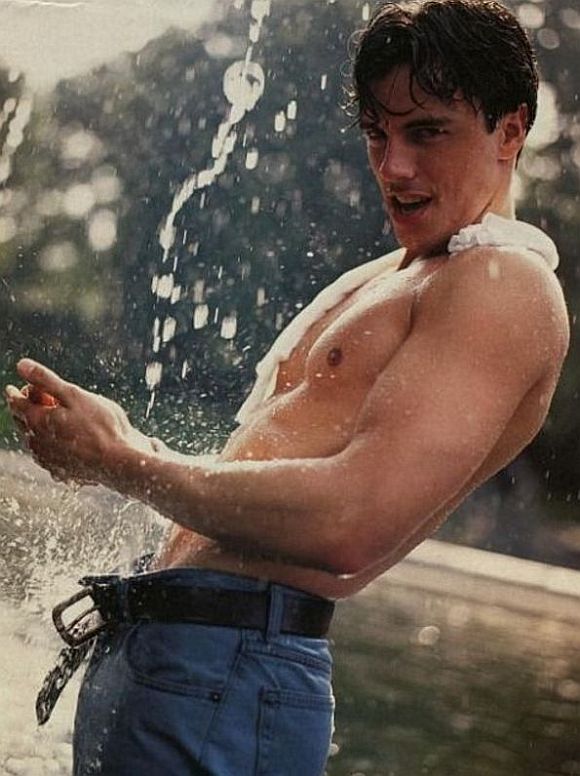 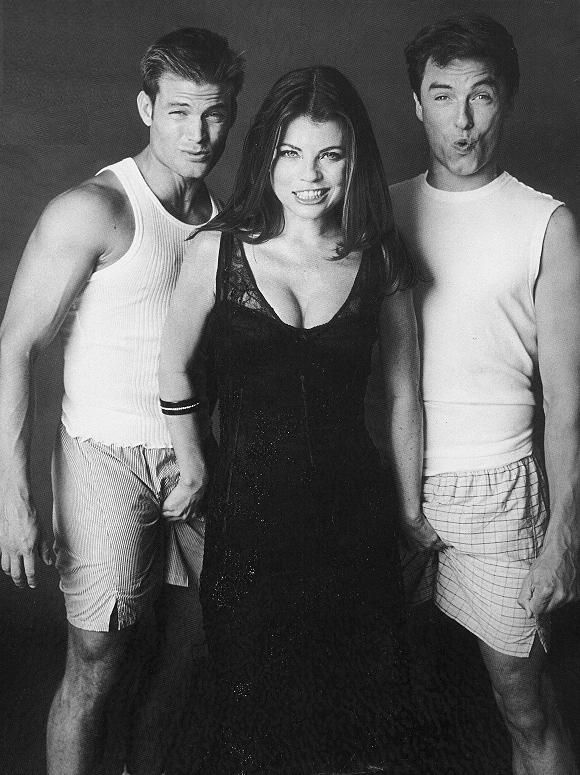 Yasmine Bleeth giving a little squeeze to Casper Van Dien and Barrowman.
at March 11, 2017 No comments: 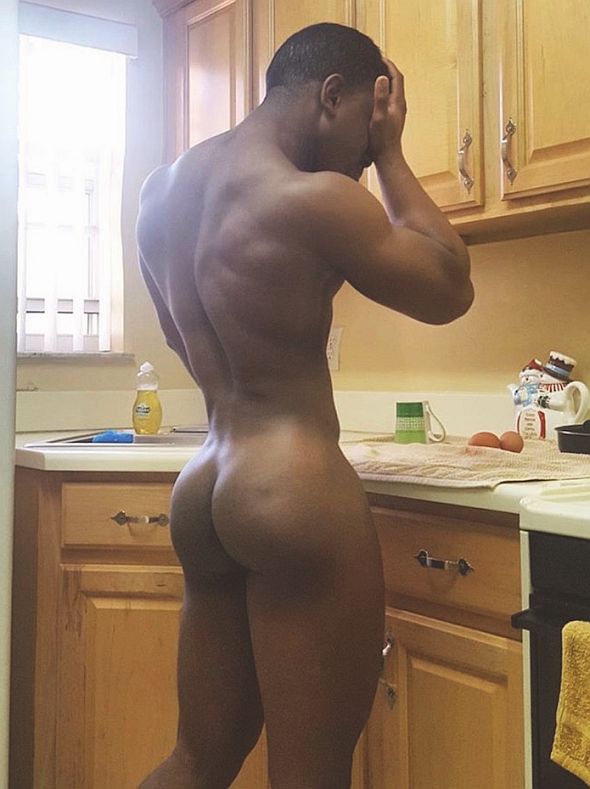 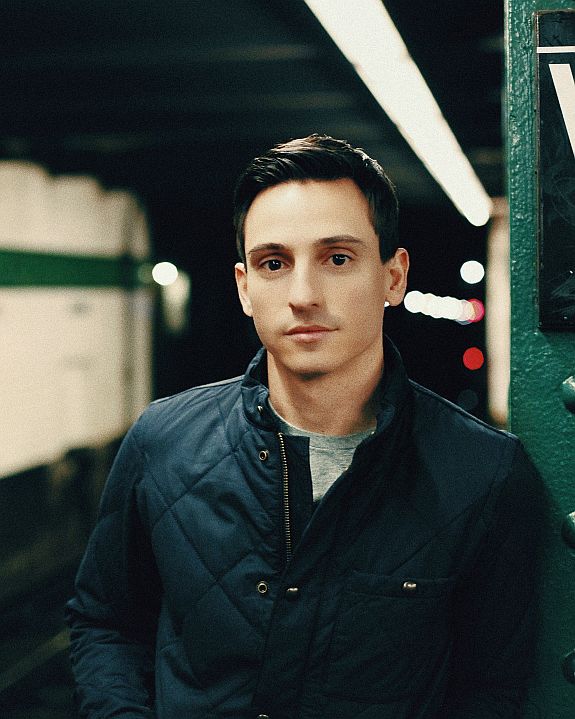 'Triolo, who has been in movies like "How to Be Single," and his Upper West Side apartment recently went viral thanks to a New York Magazine feature showcasing his small city digs.' 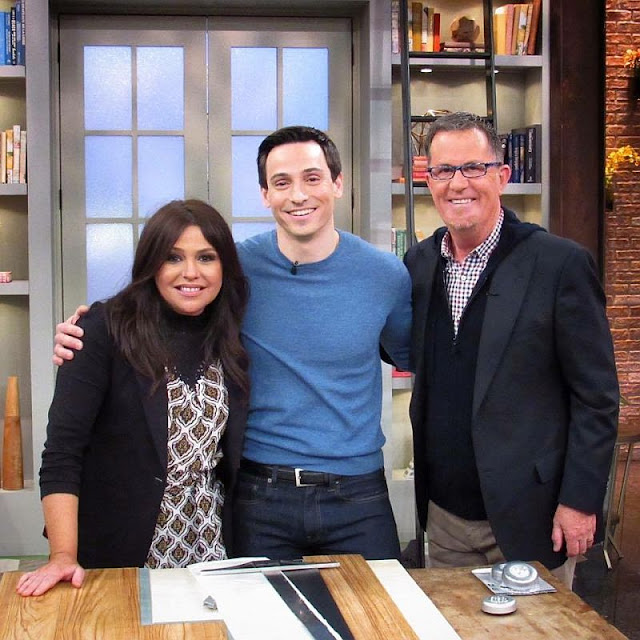 If you're a regular FH reader, you are most likely familiar with my previous pieces on talented and sexy Anthony Triolo. I have featured the work of the New York actor, model and singer's work going back over five years. Today I am not featuring a new role, song or modeling shoot instead Anthony's apperance last week on the Rachael Ray show. Anthony was on a segment discussing design ideas for tiny living spaces.


The clip above introduces Anthony'segment which continues in Part 2, (HERE:) with Anthony discussing flooring and other ways of organizing in a small home. Take a look inside Anthony's apartment in the video's above and in a slide show from Anthony's New York Magazine layout HERE: 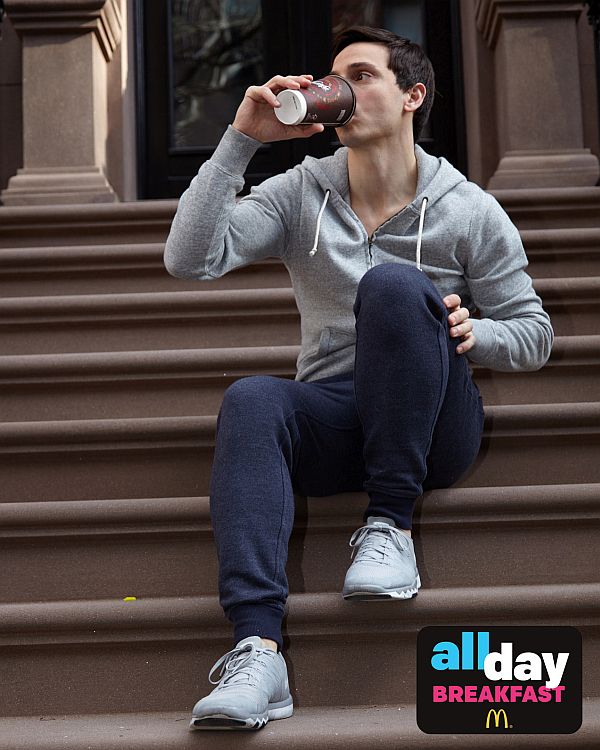 Anthony recently did a shoot with NY photographer Rico Kinnard combining two of his passions, two, that don't always go hand in hand. 'I love staying active and in shape & I also love my McDonald's!' 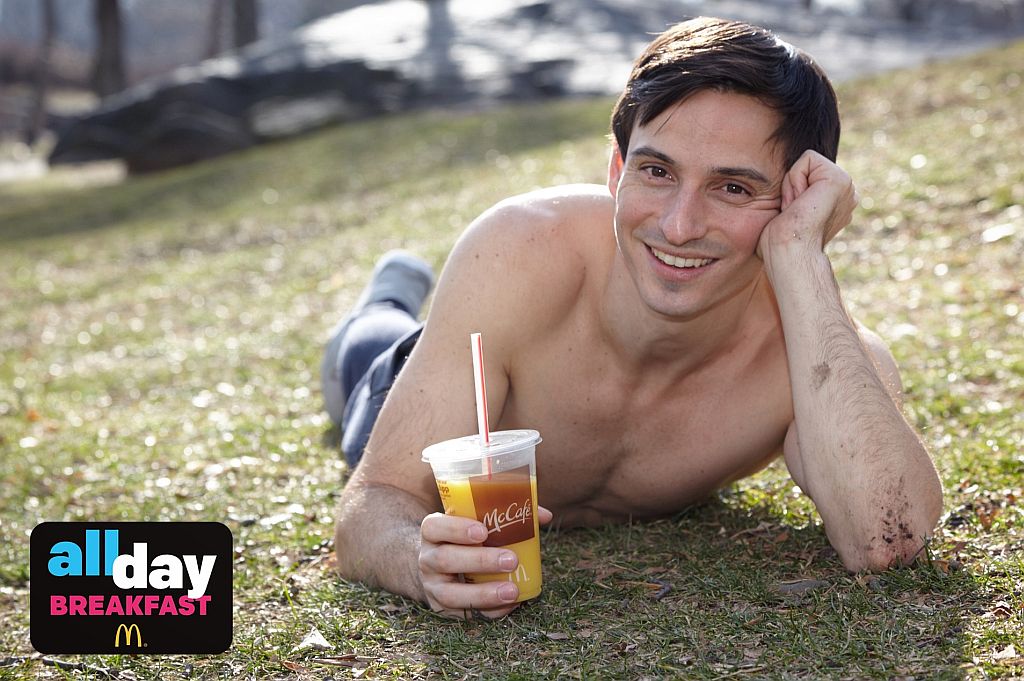 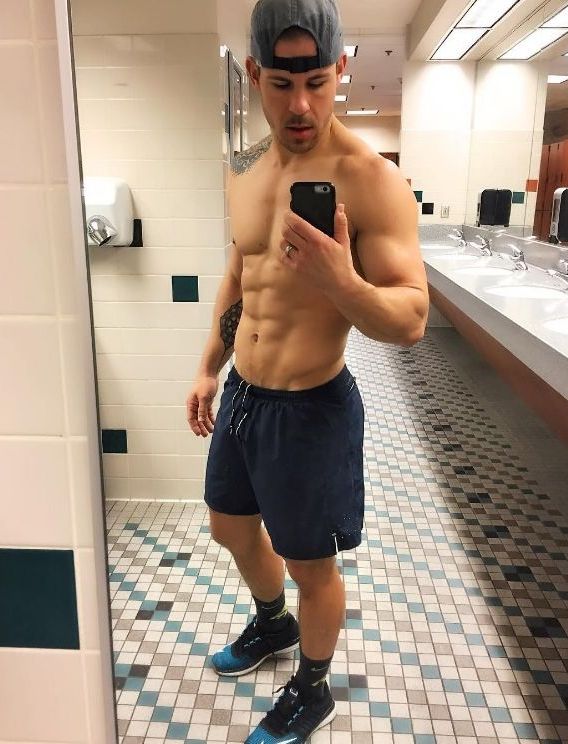 'I'm sure you can tell I may not be your typical amateur model searching for their big break in the industry...' 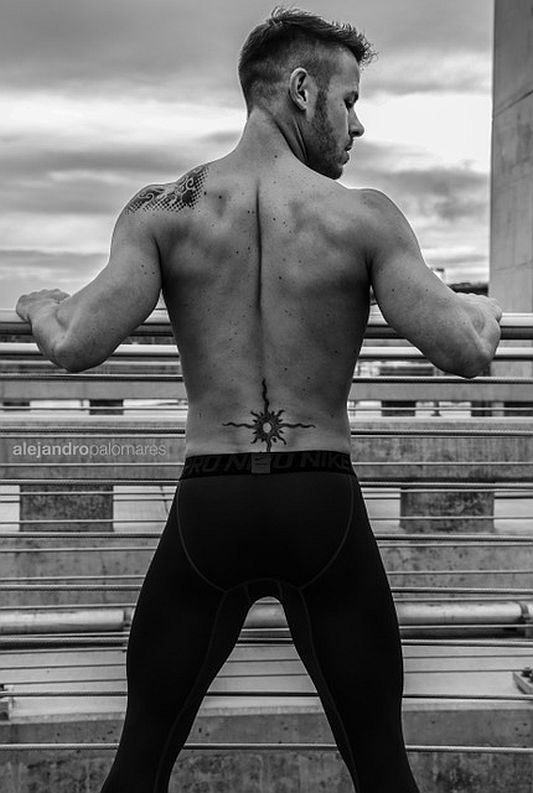 When choosing models and artists to profile on FH, one of the qualities I try to stay away from is typical. First off, because often, typical means the same, and for male models that usually means a great looking guy over 6' tall, lean, but muscular, and hovering somewhere very close to their 20th birthday. There is only one thing I look for when I reach out to a model or artist, and that's if their images grab my attention. That was certainly the case when I first saw the work of model PDXAndyJ. 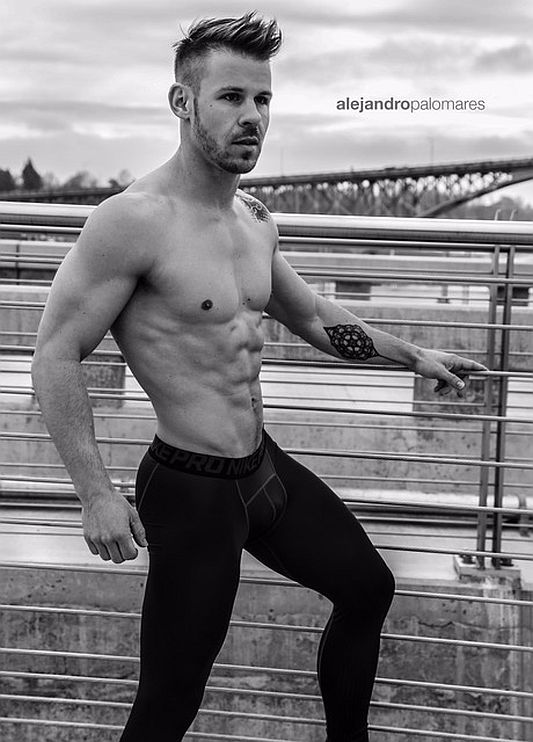 You can see right away that Andy has a smokin body, especially those incredible arms of his. Andy also knows how to use his body beautifully with pose and movement, and has a natural ease in front of the lens. I also love Andy's brown eyes, which portray both great strength, as well as kindness and caring that give his images a added level of appeal. Not all models can combine a fierce sexual energy with kindness, but Andy blends them both seamlessly. No matter what he is modeling, sportswear, underwear, or nothing at all, Andy manages to ensure the viewer see's more than just a great physique, but the person, and personality behind it.

Next 2 images from Wainwright Images 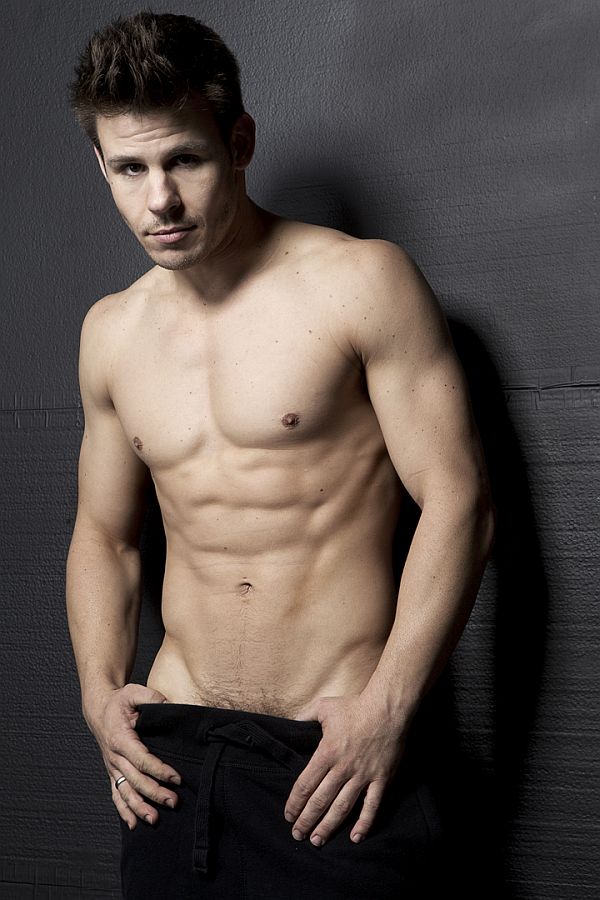 'I had no experience or much interest in standing in front of a camera before. I'm a shorter stature (5'6") so I always knew 'modeling' wasn't going to be a very realistic goal. Who wants to shoot guys that are 4-6" shorter than girls in a single image? I met a local Portland underwear designer and he needed a model to be photographed wearing his work in order to put together a wholesale catalog.' 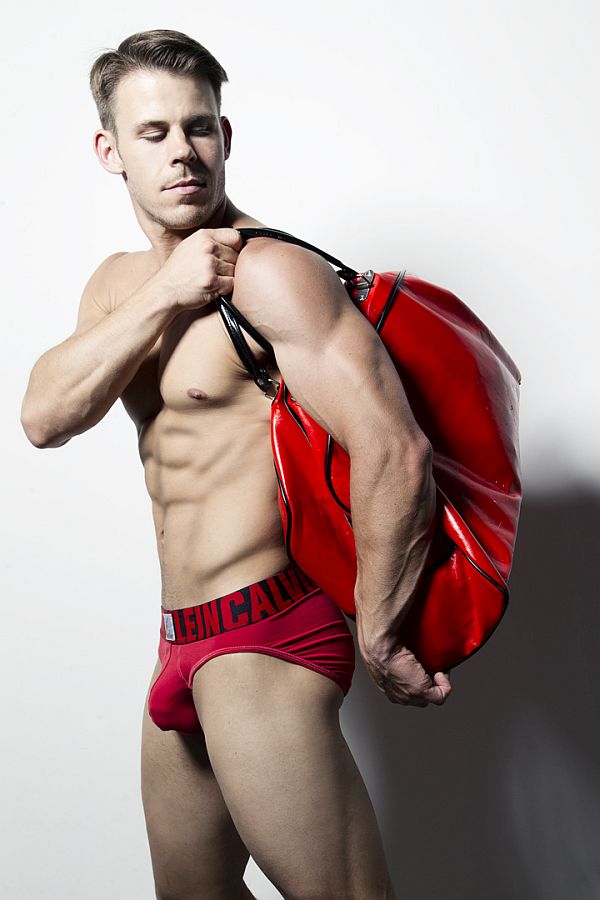 It's funny, when enjoying solo images of a model I like, in the hands of the right photographer, height is irrelevant. I would not have even though of height if Andy hadn't mentioned it, in fact, in some of his shots, Partly due to angle and frame, and partly because of Andy's strong stance and presence, he appears strong and large, with height not even a factor.

2 shots below by Theo Klein 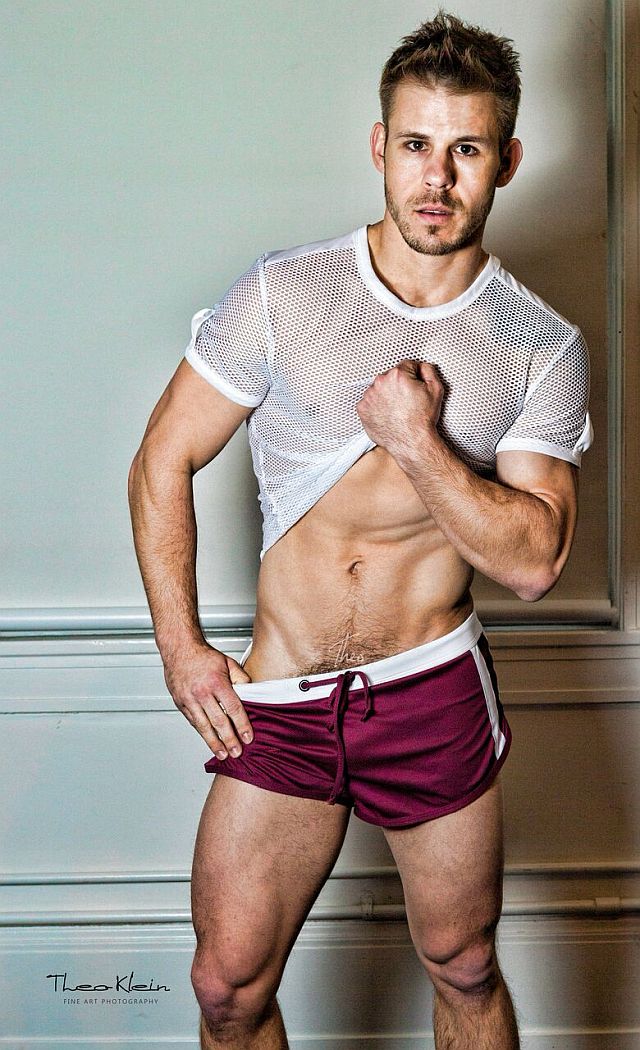 Although height may keep Andy off the runways, it is only one of the reasons he does't see himself as typical. Unlike many models on Model Mayhem, who may be looking for jobs and agents, Andy is incredibly busy with work and family. Andy loves modeling, but for now, as a hobby. Andy also love the motivation it gives him to work out stay in shape! Not that getting more modeling work isn't one of Andy's goals, it is just something Andy doesn't have the time to think, or worry about with everything else that is going on in his life. 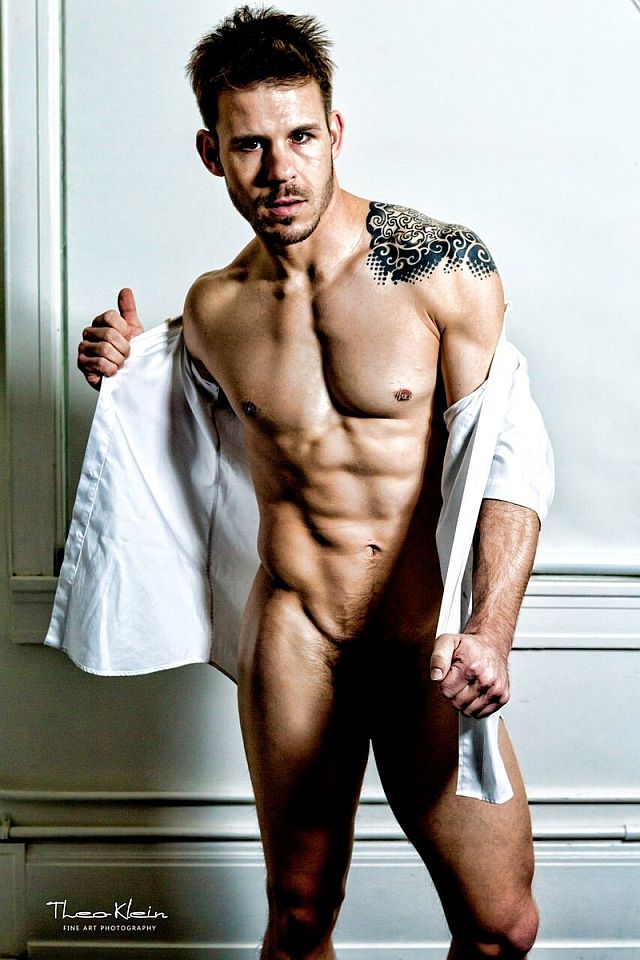 One of my very early shoots (2009) was with photographer John Gress. I had been a big fan of his work for a while and was familiar with it. I was very nervous and didn't know anything I was doing. However, the shoot went really well. He was very patient with me. Was very directive and really taught me a lot in a single shoot. Some of my favorite images are still from that shoot.

Image below by AJL Photo 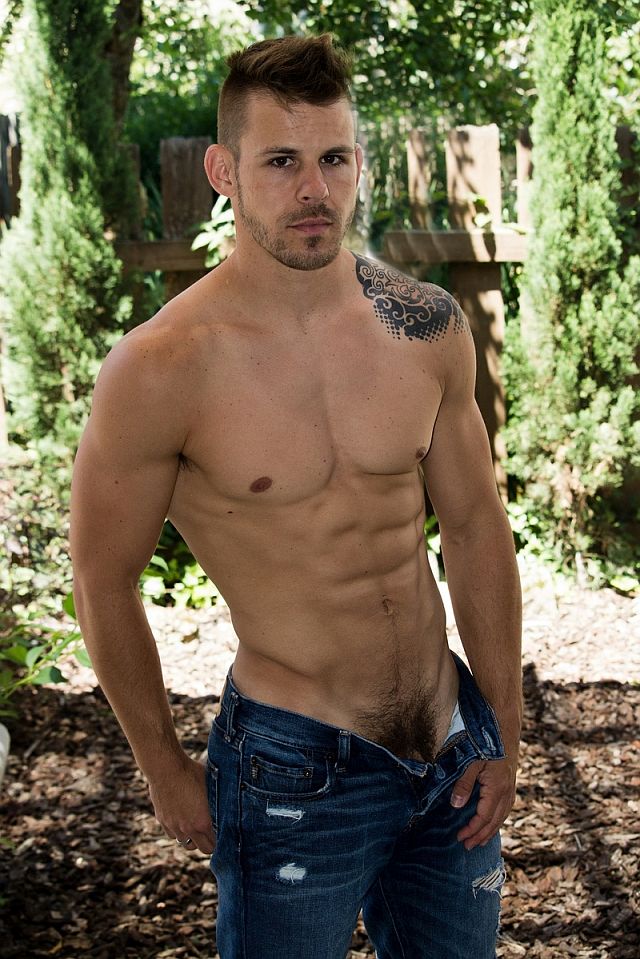 All of the photographers I have met have been very respectful and I was able to learn something from each one. Every shoot is different and every photographer is different. Some will be very hands on and directive and tell you exactly what to do or how to pose or where to look. Some are very silent and all you hear is the click of the camera. A little unnerving if you're not used to it, but after a while you learn to just keep moving and hope that if they want something specific they'll speak up.

Image below from Mr. Terry Hastings 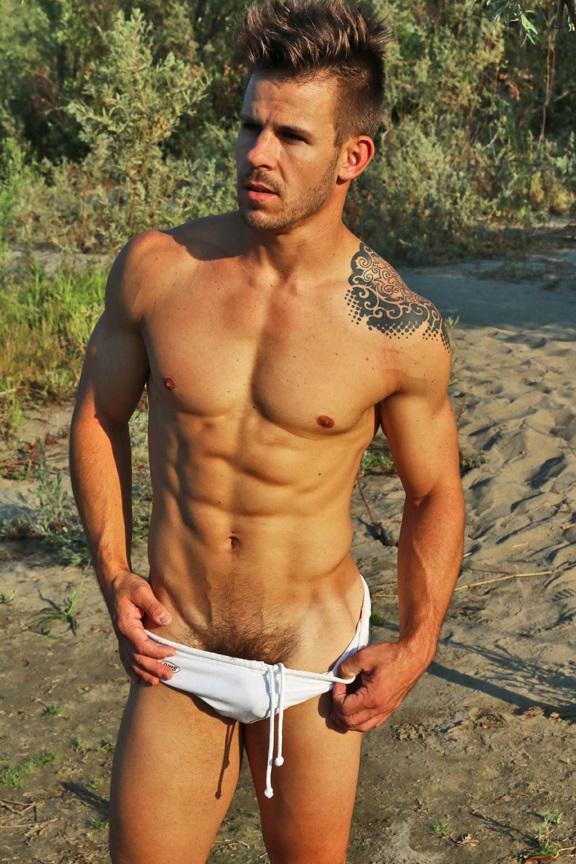 Factors weighed before deciding to take it all off?

Who will be seeing it! I don't mind being naked or shooting nude, but I'm hesitant about full frontal being published on-line. I still have to look parents in the eye at PTC meetings and if they see a full frontal modeling image of me online.... that won't happen anymore

Next three shots by jtoPHOTO 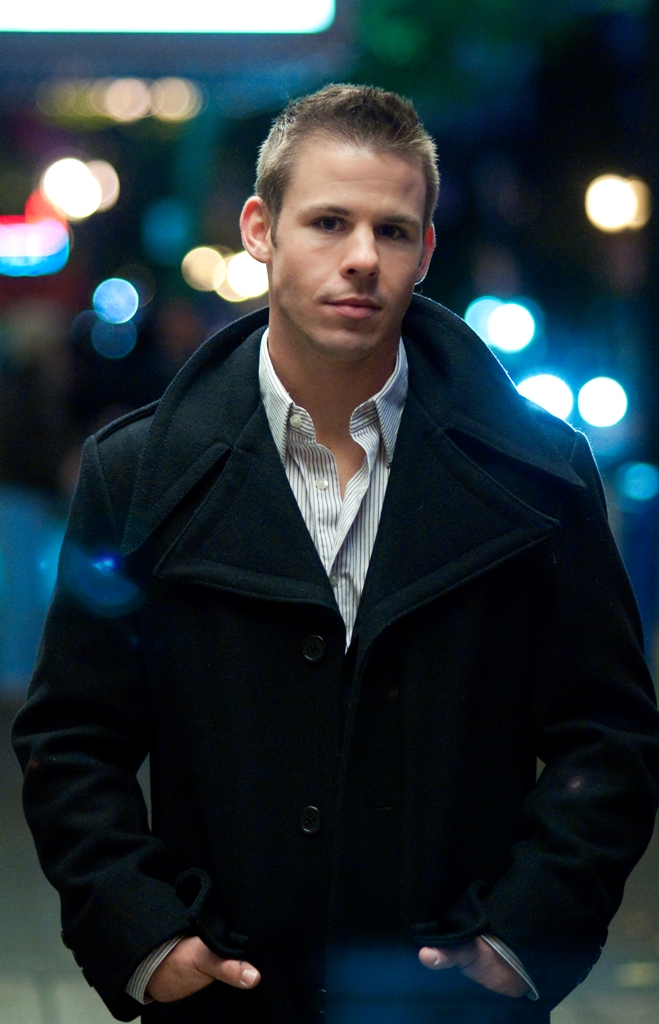 Body part are you most happy with / Body part that gets attention from others?

'I'm always pushing my body. there are always things I would like to improve or see changes made to. my abs probably get the most attention, and honestly its probably the part of my body I think about the least. They are mostly genetic, clean eating and hitting the gym/cardio obviously help... but I'm not focused on them. Also, my legs/butt get attention. I have always been thicker on my lower half, which isn't always the case for a lot of guys. I used to not work legs much because I didn't want to be disproportionate, but I have learned working them and improving them really does help the overall package.' 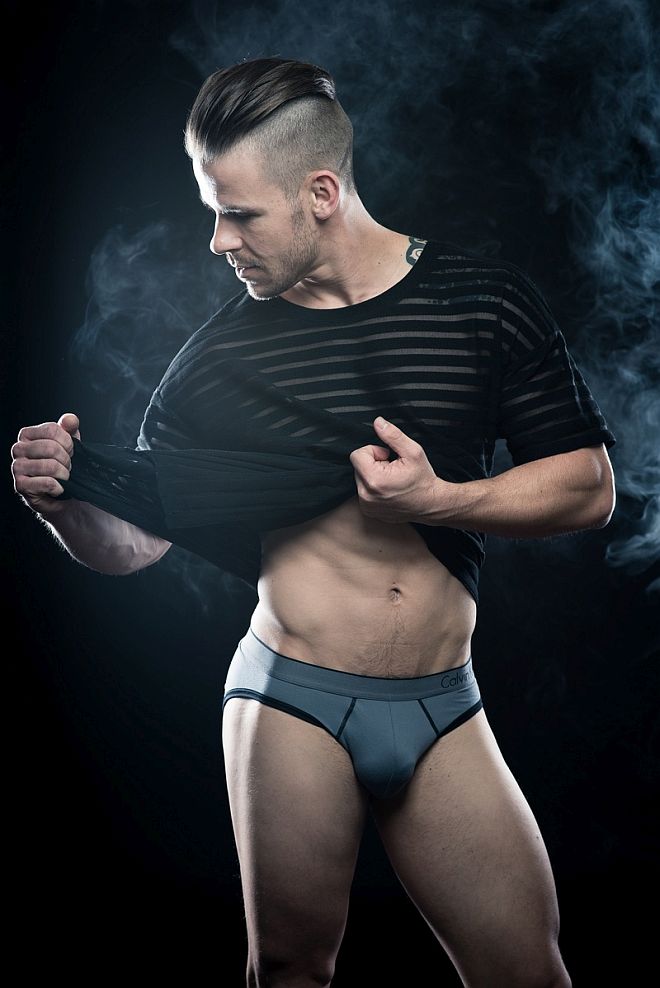 'It gives me a goal or 'end point' Hitting the gym, pushing myself or trying something new because I know I have a shoot on the books is the best motivation. It also forces me out of my comfort zone. Its not always comfortable getting in front of the camera. but doing it and learning how a photographer works and how they communicate is good for the growing process and interpersonal relationship building. 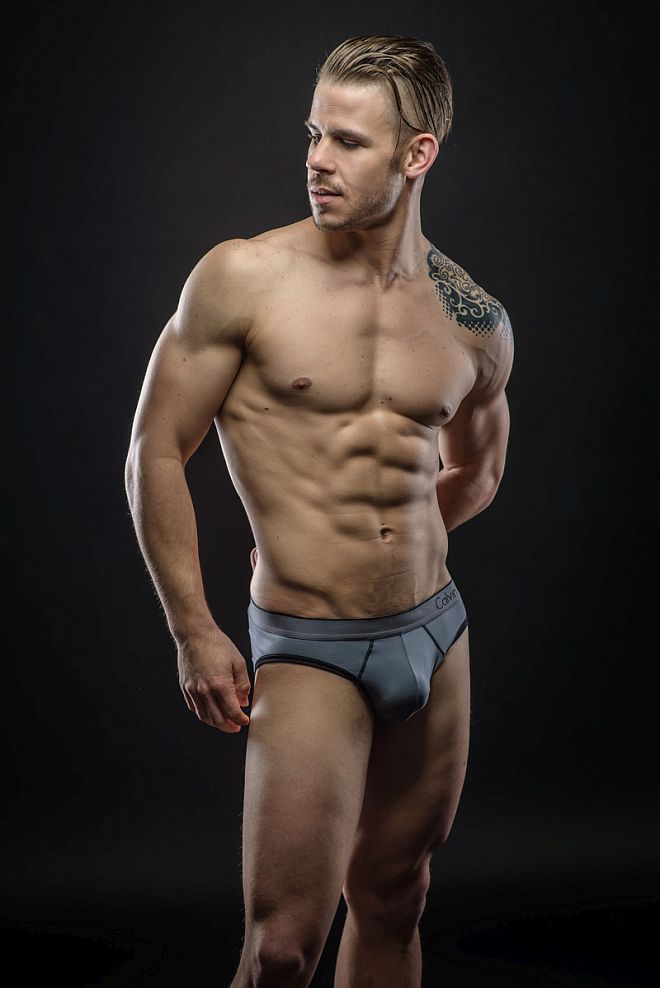 Have you ever been recognized from an image?

I have a couple times yeah. One of my images was once used for bar in San Francisco; Lookout. Another image was used on a greeting card and I had a friend in the Midwest send me a picture and tell me "I saw you today!"

What would your dream scenario be for a shoot?

Hard to say. it really depends on what kind of shoot I suppose. but more than anything... a shoot that is well paid.... or honestly, paid at all! LOL

There have been several shoots that are somewhat public. Being willing to take your pants off and be shot on the side of the road or a sidewalk with passerbys is challenging. The wide eyed stares or people embarrassed to even look at you. or covering their kids' faces. I've never been in a position where I felt unsafe or like I may be harmed. 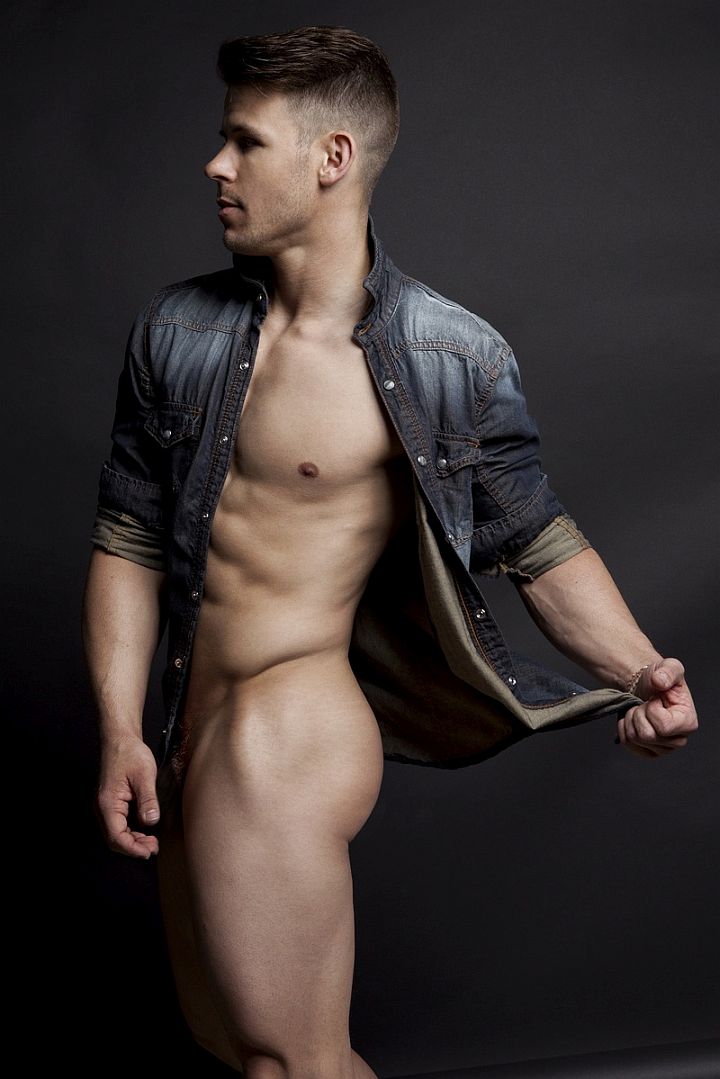 You use the word 'grace' in your MM bio. what does grace mean to you with modeling?

Being able to work with any and all kinds of photographers. Handling critique or criticism in the moment without it ruining the shoot, especially if there are others around. Timeliness, respect of your photographers time and efforts put in as well. Being flexible in the moment and willingness to try something new if the photog has a vision 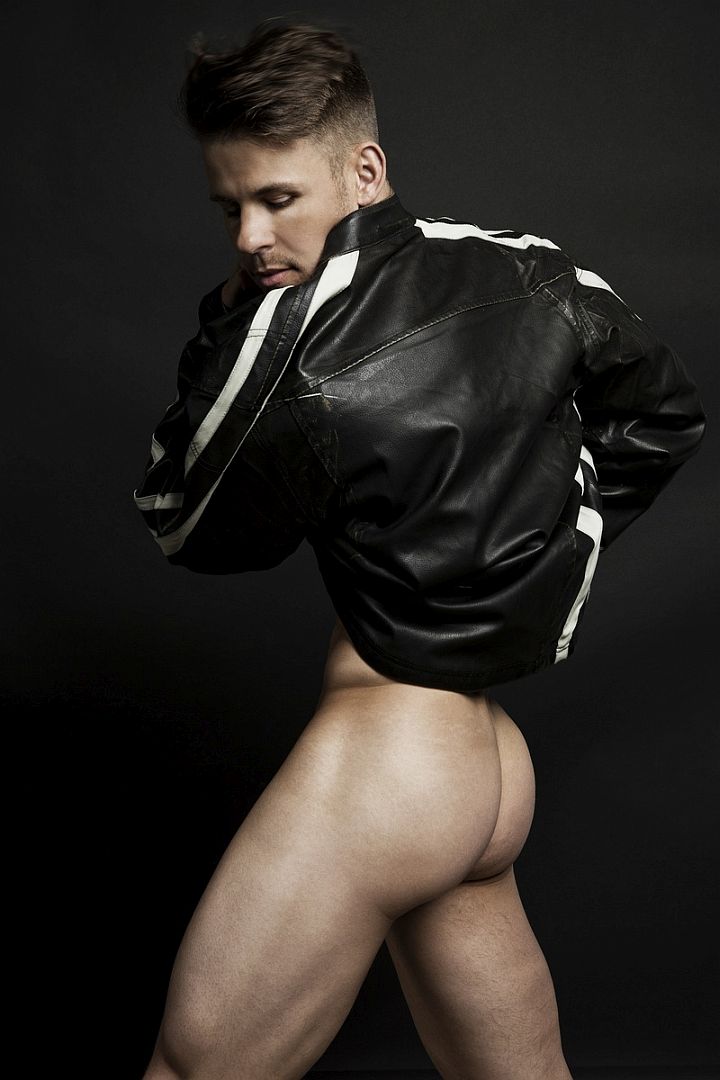 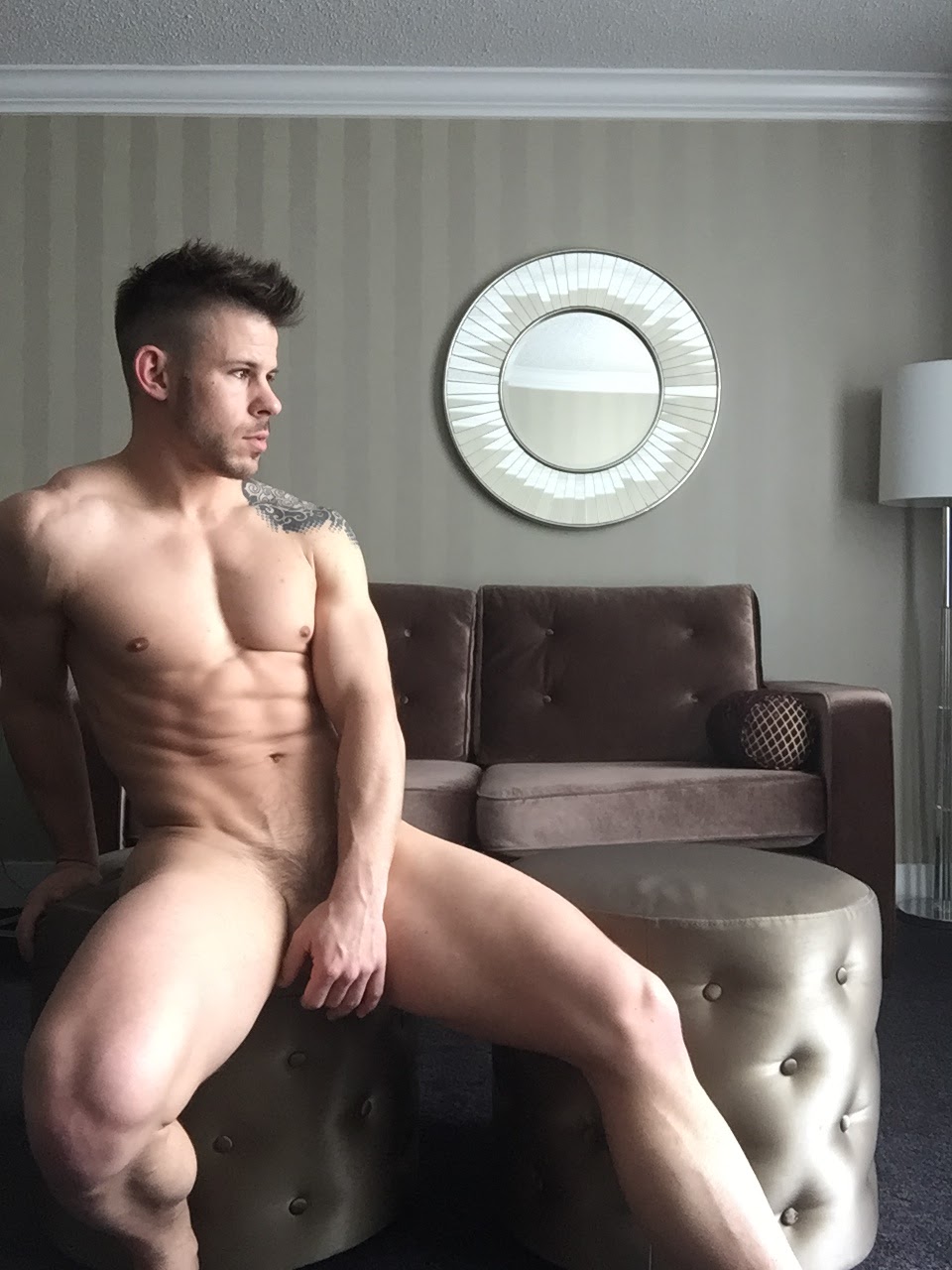 Above: Self shot: 'Great natural light in a hotel room with my iPhone and self timer.
at March 11, 2017 No comments: