Favorite Pic of the Day for September 17th 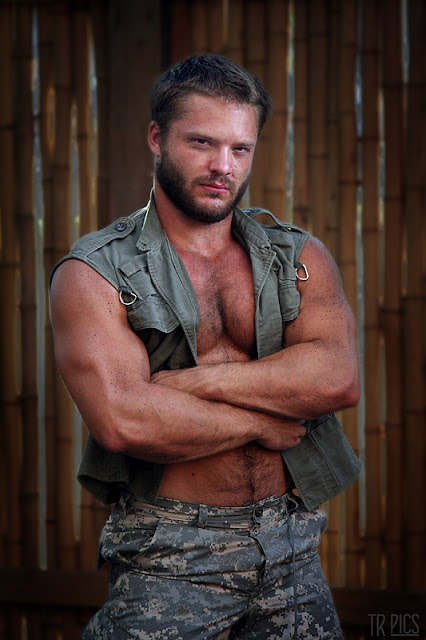 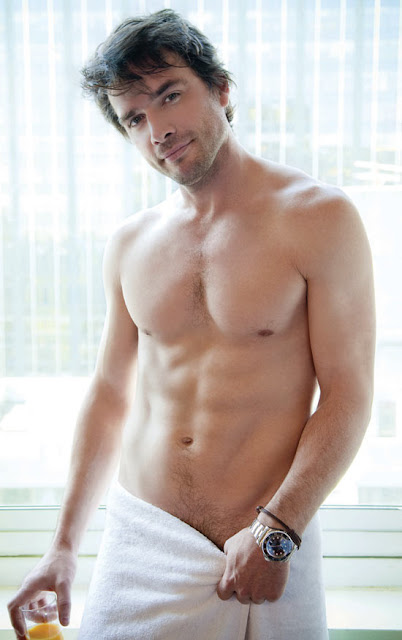 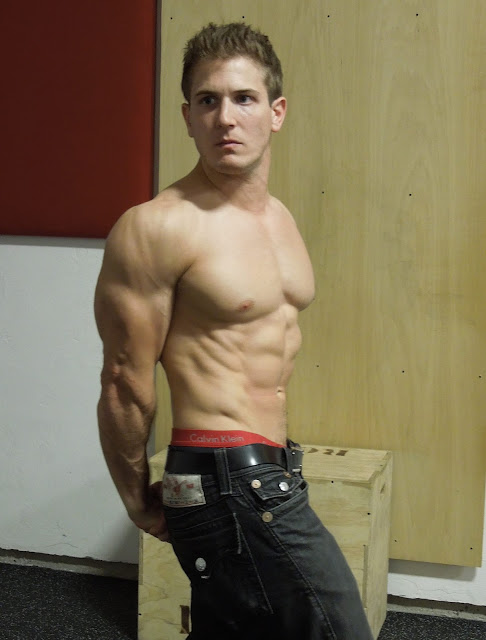 Just Because, nothing better than a great new shot of Scott Herman flexing and rockin' his Calvin Kleins!
at September 16, 2013 No comments: 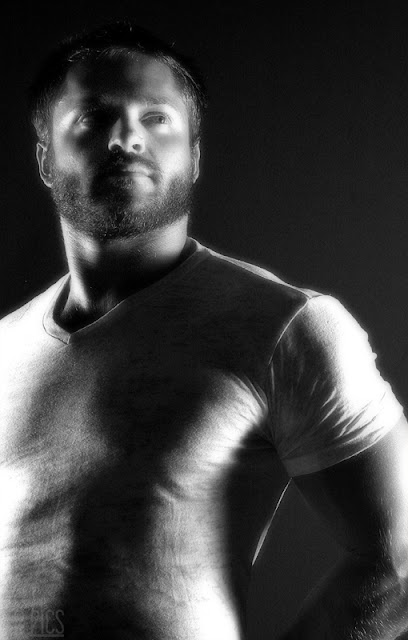 'My goal is finally owning my own ranch with sheep, beefalo or cattle. This would help power my 4 pounds of meat a day habit! I would find it very fulfilling to sell others meat I know was raised in a manner that leaves the land better than I found it.' 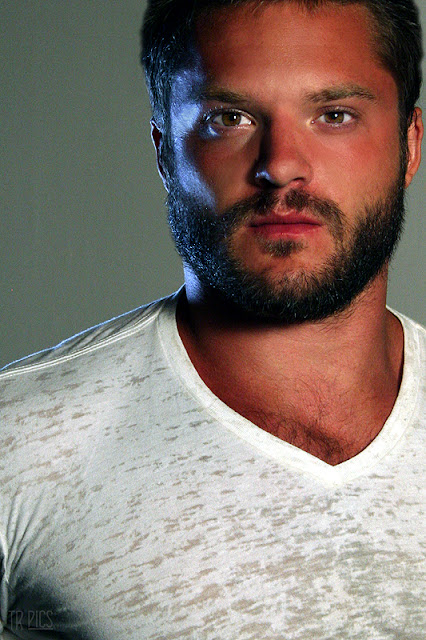 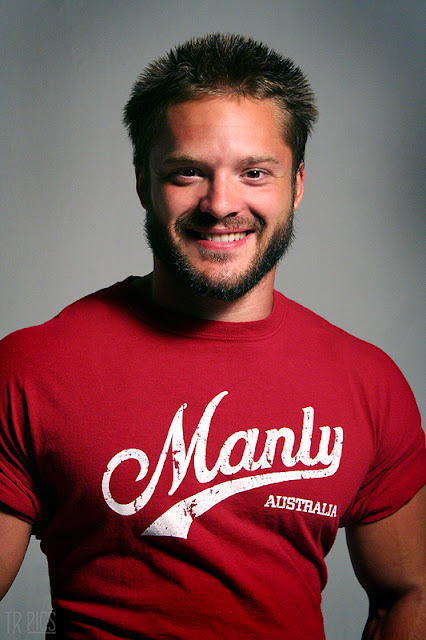 As his t-shirt indicates, clearly Saul is manly, naturally fit and at home in front of the camera. I also loved the various aspects of Saul's personality which Tom captures so beautifully in these images. With Saul's incredible body, it would be easy for an experienced artist to ignore his many other assets and charms which make up what makes him so special, Tom does not. It is one of the reasons I have such respect for Tom's work. When looking back over many features on the many men he has shot Tom Rubeck' remain some of my favorites. 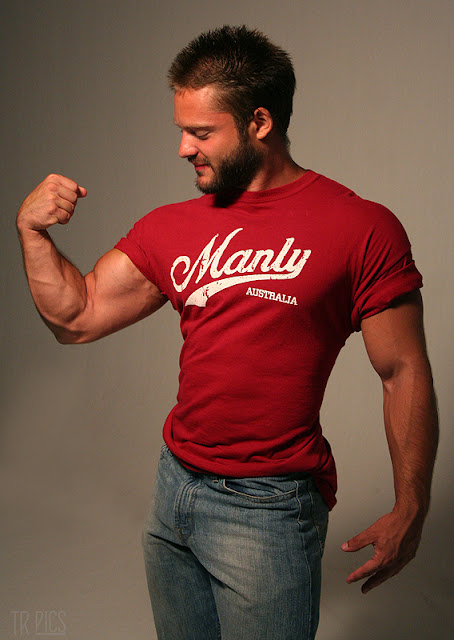 The Dallas photographer always picks the most amazing and unique men to capture. I am not generally a fan of images where the men are dehumanized, or made to look like generic mannequins. In front of Tom's lens, you are not just a body, not even just a man. Tom uses his immense skills and sensibility to also capture an essence and quality in each of the men he works with, one many other photographers seem to bypass or ignore. 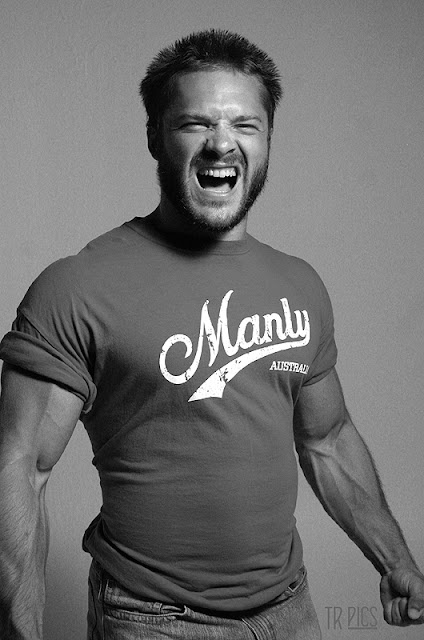 Tom first saw Saul on Model Mayhem and says that there were two thinks he liked right off the bat. First, he was local, both work in the Dallas area. Secondly, at the time Saul had nothing but selfies and camera images on his site. Tom loves shooting guys who either just starting out, or just haven't yet put up a huge resume of images as they are usually fresh, eager and very easy to work with. According to Tom, Saul was all of them. 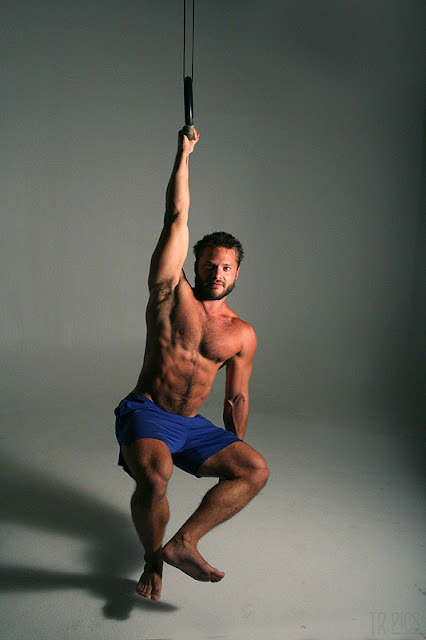 Saul Says:
My ex-girlfriend encouraged me to model. I needed a part-time job because 40hr/wk full-time work didn't leave me with enough time to sleep and play. Modeling was one suggestion as she considered me pretty attractive and unique looking. Some home photoshoots playing with an iPhone gave me an avatar picture to put on DFW photo models. After I had a little experience there I created my MM. She happened to be at my first shoot with Tom. Tom is easy to work with. It was one of the nicer studios I have had the privilege to shoot at so whatever ideas come up we usually have capabilities to try them. Tom tends not to use strobes because of his video background, but he lights me very well.

Tom Says:
On our first shoot, his hair was buzzed very close. It gave him a great look. Overall, Saul is the most easy-going, comfortable in his skin, laid back kind of guy. That doesn't mean he's not focused, because he is. He is involved with Power Lifting and Strong Man competitions, and strength and his diet are very important to him. On this first shoot, his girlfriend came along, and was actually very helpful, because she knew what poses he could improve on, especially the gymnastic type of poses. 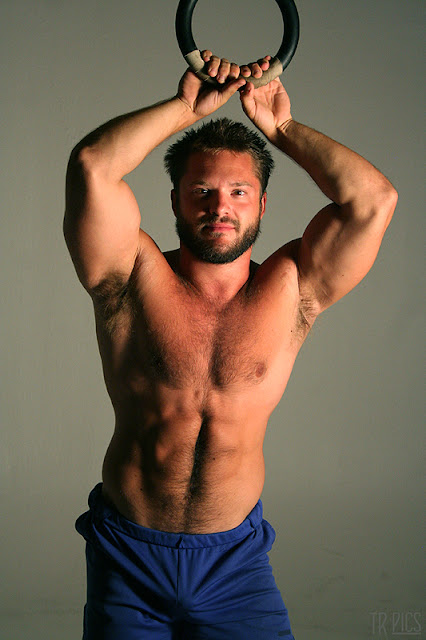 'Overall, what I like about his look is that he is just about as "all man" as a guy can be. Natural body hair, plenty of it, feels comfortable nude, and is not shy at all. His body is tight, big, but not artificially. He is about as natural as they come. Looking forward to our third shoot...!' 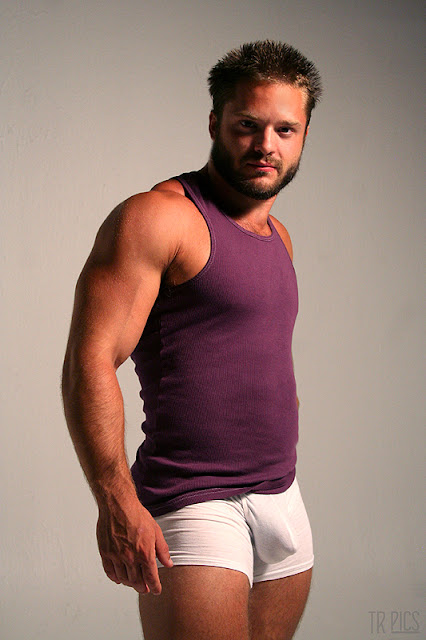 For these images, their second shoot together, Saul had sadly broken up with his girlfriend. His hair was longer, grown for another photographer who wanted him with longer hair. Tom says Saul was just as easy and eager to please on this second time in front of my camera, and collaborated on a few ideas for some of the shots you see here. 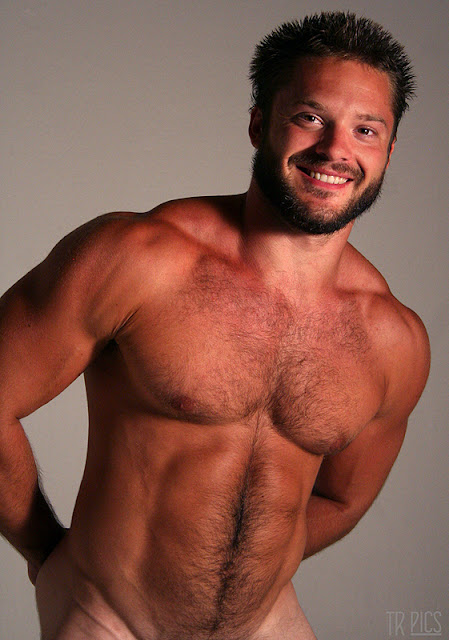 Hiking up hills in LA last week to shoot was a high point. I got to combine modeling with walking in nature, two of my favorite things. I learned shiny skin from real sweat looks much better than using oil or water to shine.

One photographer offered to pay me $100 to receive a back massage. 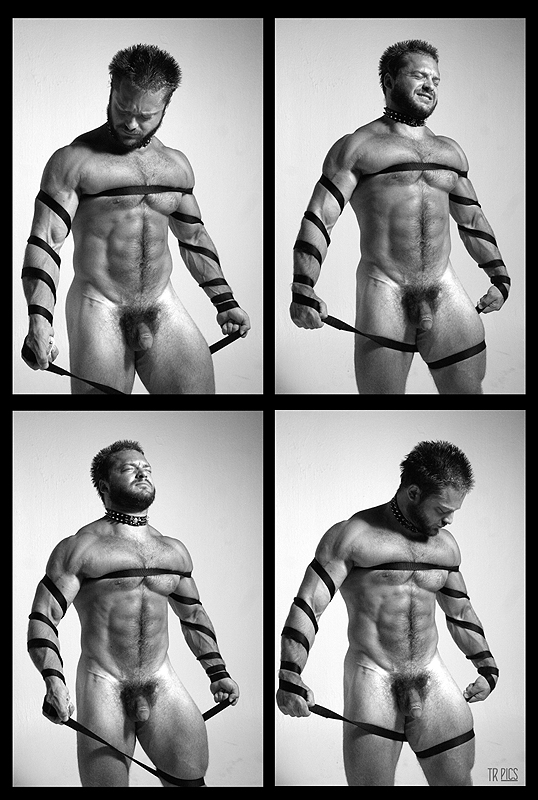 Factors weighed before deciding to take it all off?

I really didn't have to weigh any factors. I am comfortable with nudity and look better without clothes. If someone sees a nude photo of me and is bothered I did that it's entirely their problem. They didn't have to go seek it out, they didn't need to cling to strange opinions about unclothed bodies. 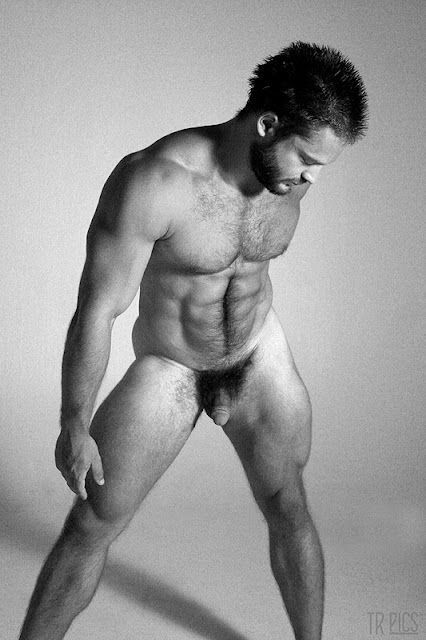 Response has been positive, especially from friends. I don't think my mom understands that artistic nude includes nudity, because even though I have showed her nude photos she thought were cool/beautiful the next month she'll advise me "don't do any nudity stuff". I've heard some limiting beliefs about modeling not being consistent enough work or that I'll die without health insurance. In reality, nothing was killing me faster than my old 8-5 safety engineering desk job complete with 3 hour commute because flexible starting wasn't allowed. 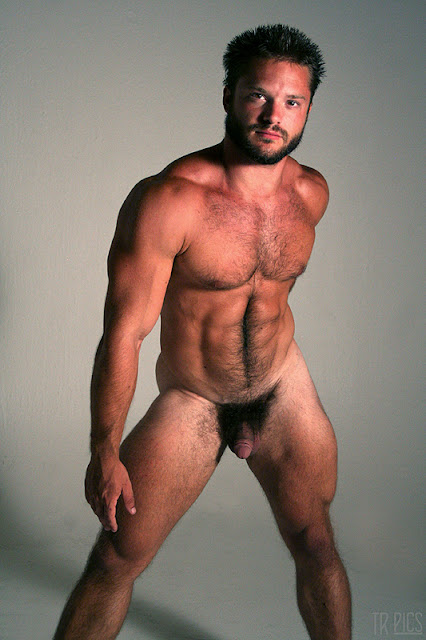 Part of your body are you most happy with, part gets the most attention from others?

'I'm most happy with my chest hair, it has expanded to cover at least double the area it did when I was 20. My legs and butt get the most attention because they are very muscular.'

Alongside an incredible female model! 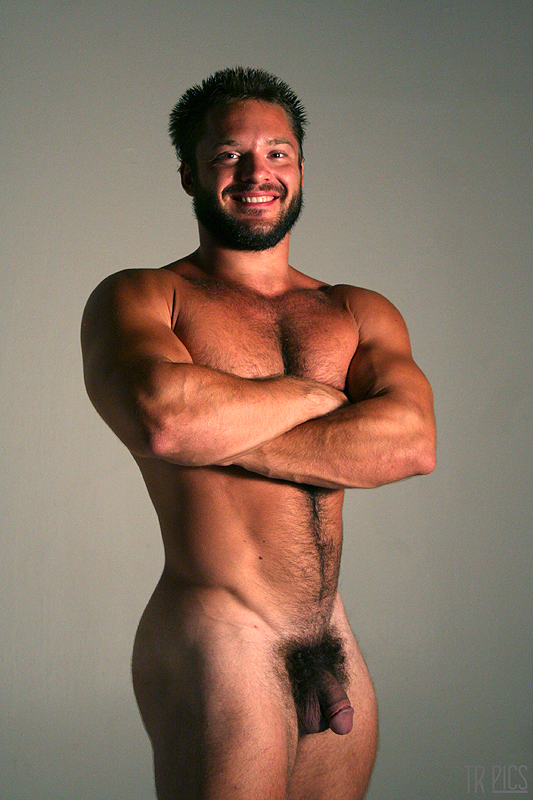 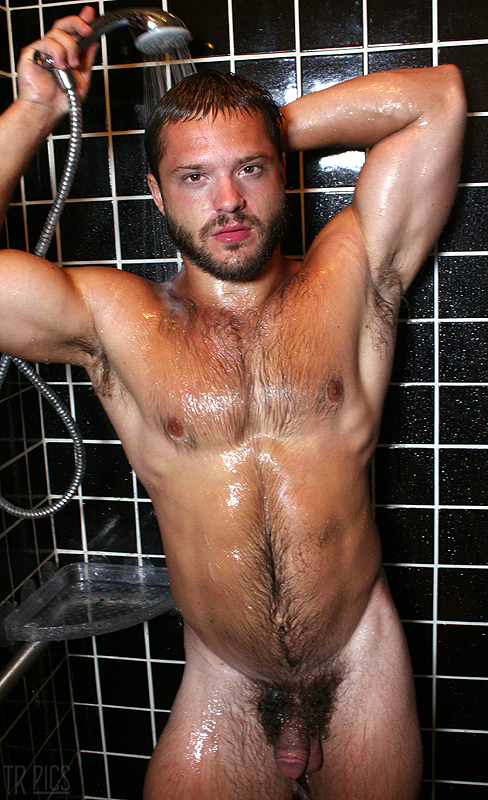 Come On Get Happy 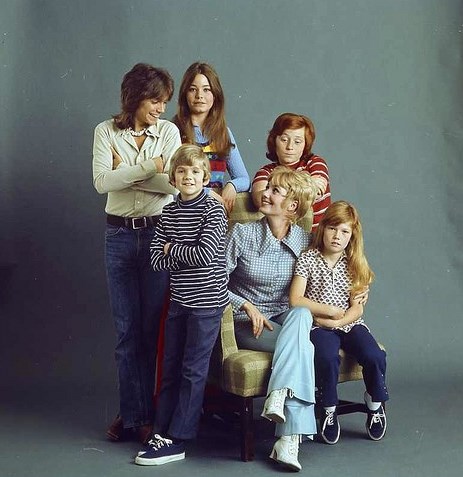 I don't think I have ever seen an episode of the Partridge Family. It was a bit before my time and David Cassidy for some reason bugs me a little. In the early 80's however, in our huge wall unit stereo cabinet, were my parents albums. It was there I discovered my love for music, beginning with my parents records. Elvis, The Beatles, The Grease and Saturday Night Fever soundtracks and the album below. Even without ever seeing a second of the show, this album was a guilty pleasure. I played it over and over and over again until it was so scratched up we had to throw it out. Last weekend, at the old movie and record store near my home I saw the album again, this time on CD. All the way home I listened to my favorite song Echo Valley 26809, such a cheesy, bad song that still manages to be addicting all these years later. 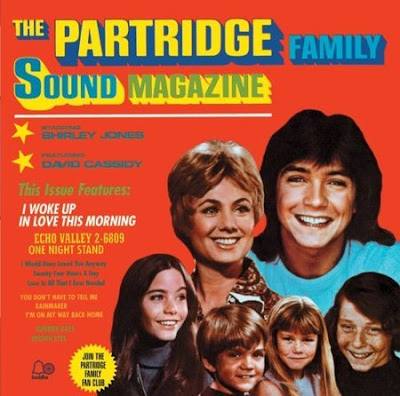 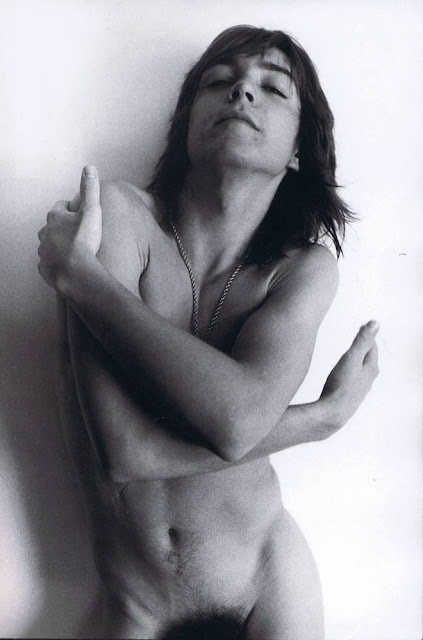 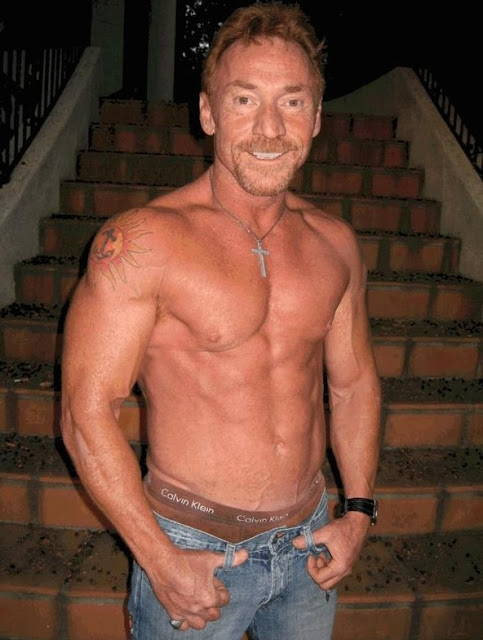 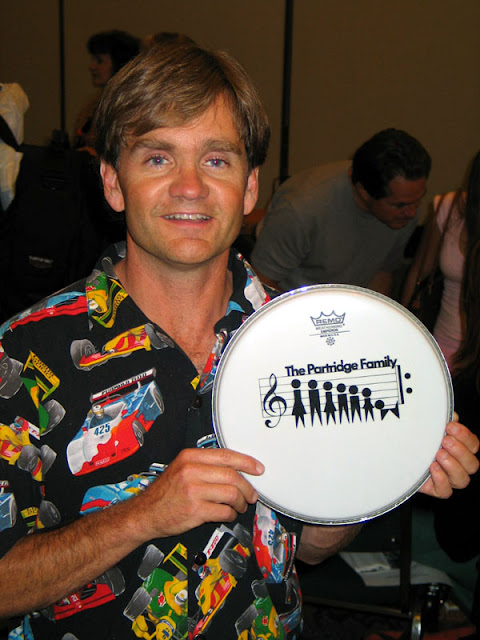