Favorite Pic of the Day for January 2nd 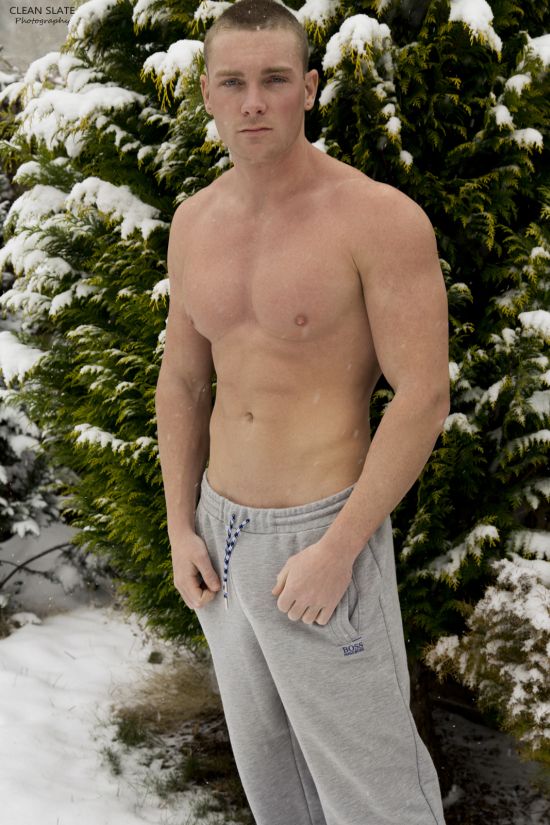 Above: Snow Day
Billy by Clean Slate
-See More Below-

Be Bold, Be Brave 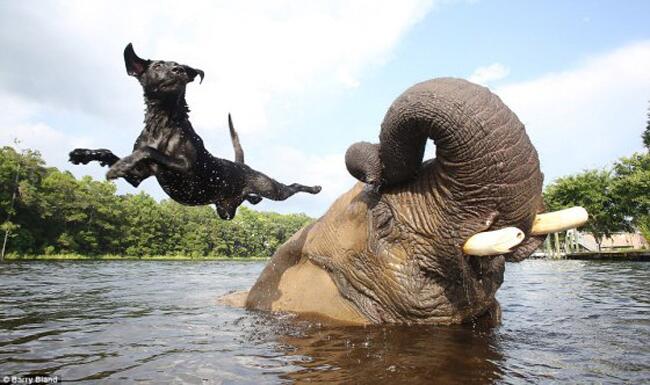 Happy New Year! Be Happy, Be Kind, Be Bold, Be Brave
When I got home last night, (stomach heavy from too much Kung Pao and ginger beef) I began trolling the web for an image and quote that best sums up how I hope 2014 will unfold. This image from Emergency Elephants, and the quote from the incredible Audra MacDonald were both perfect for the changes I hope occur within the next 8-10 months. Hope you all had a safe New Year's Eve! 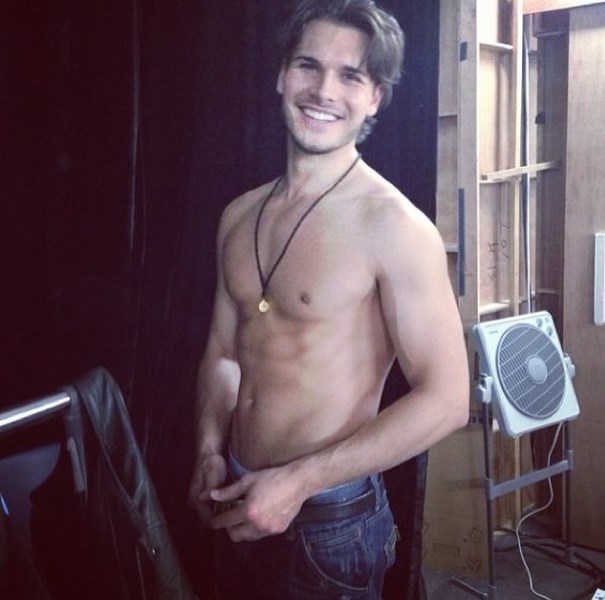 Dancer Gleb Savchenko continued giving even after Christmas with this image he posted Boxing Day on his Instagram!
at January 01, 2014 No comments: 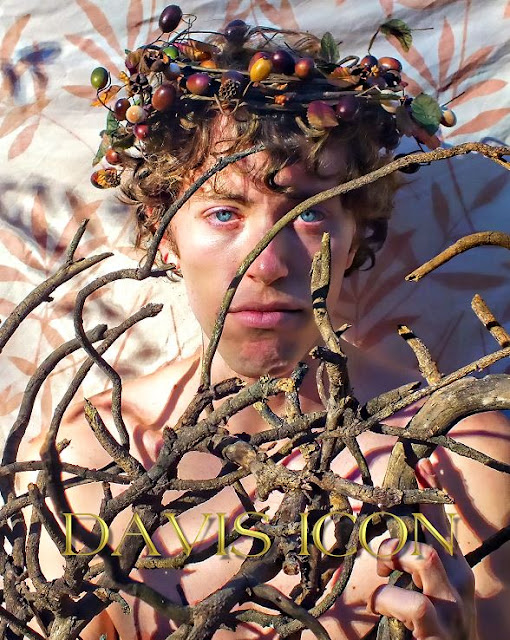 'Because of Derick's beautiful eyes, hair and skin tone, I wanted a soft more angelic look in some photographs and a sharp more intense look in others to take advantage of his versatility.' 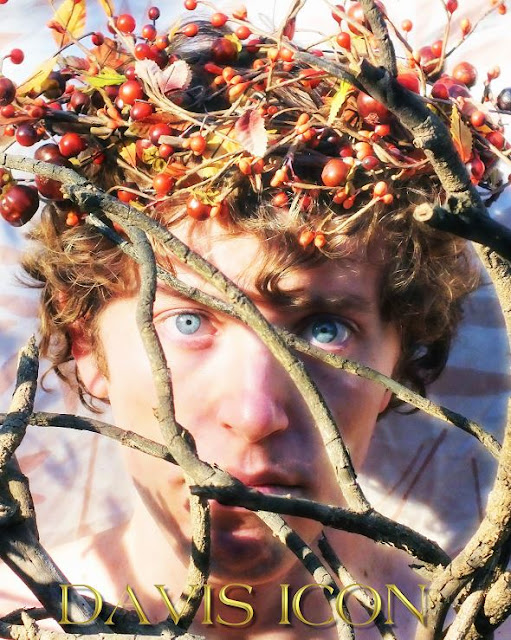 The inspiration for this beautiful translucent shoot began with Dionysus, the Greek God of wine and fertility. Dionysus is believed to have invented wine as well as the sharing of the art of tending to the grapes. He was also known for the two contrasting sides of personality, both thought to reflect both sides of wines nature, On one hand Dionysus was capable of bringing great joy and divine ecstasy. On the other. a brutal, unthinking, rage. 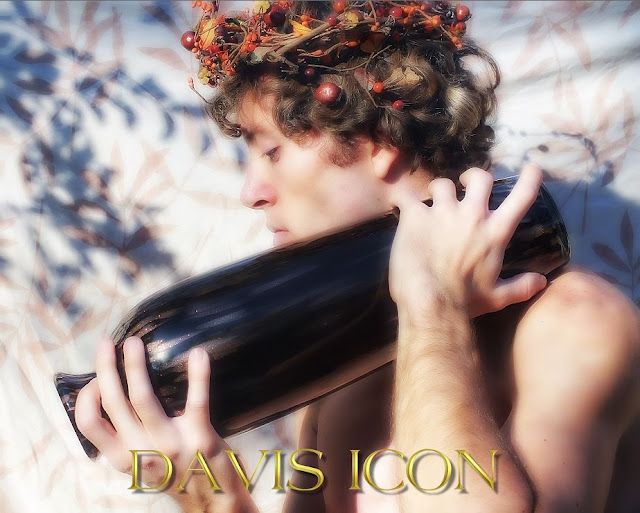 William shot these images of 24 year old model Derick Voigt on Christmas Eve, in a cold sunroom, taking advantage of the winter light and shadows. There is a different look and feel to winter sunlight, equally as bright as the summer sun, but the temperature and reflections often give it a warmer feel especially as it hovers over and warms the bodies skin. 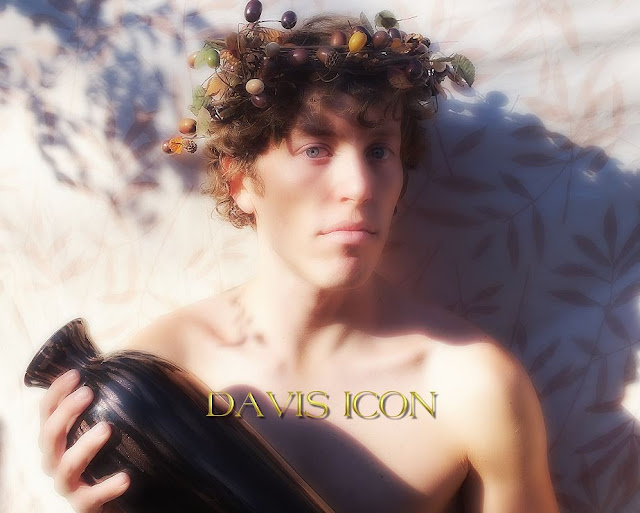 William was certainly spot on about Derick. The San Antonio has an ethereal beauty with his curly brown hair, full lips and beautiful and hypnotic blue eyes. Those eyes also express both sides of the Greek God, the quiet beauty and ecstasy as well the capability for deep intensity. Derick looks like he stepped right out of a historic novel or bible story making him the perfect inspiration, and incarnation of Dionysus. 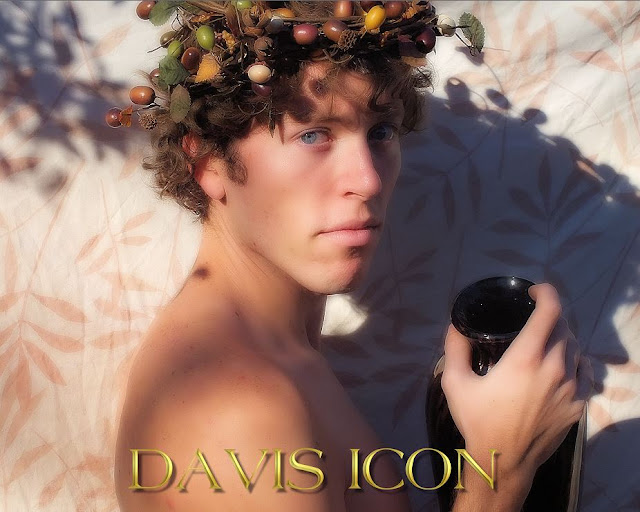 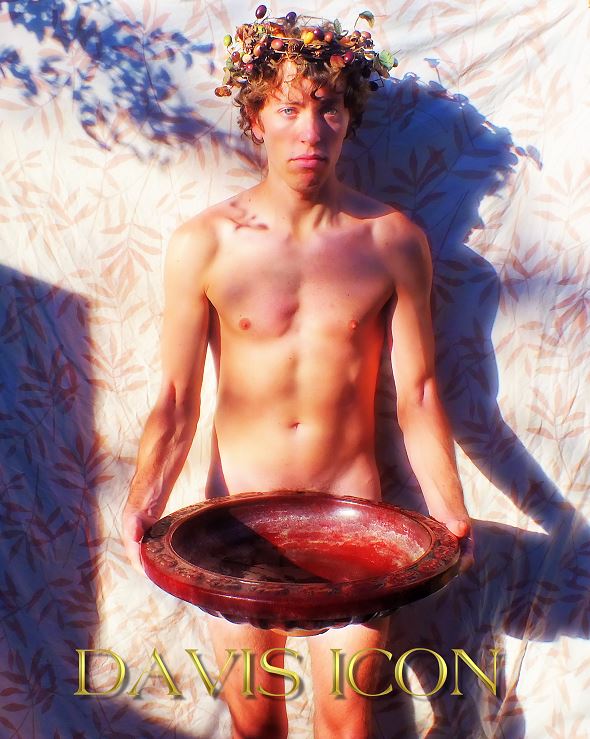 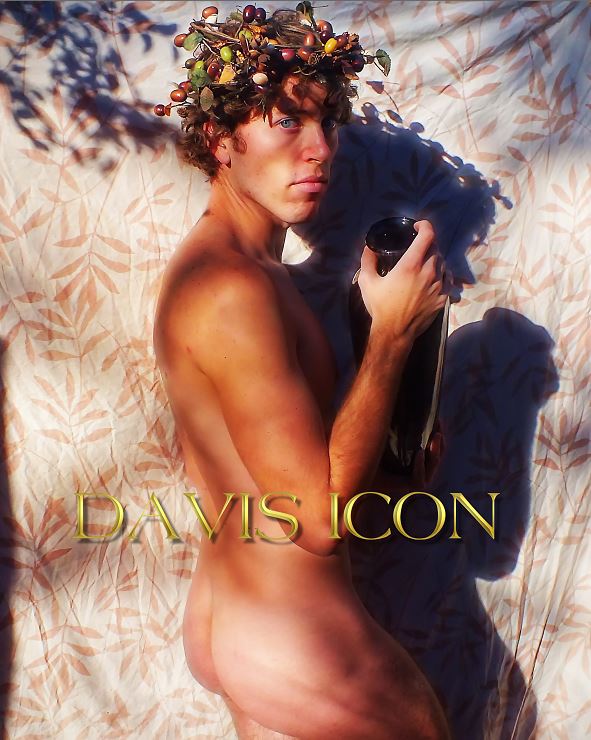 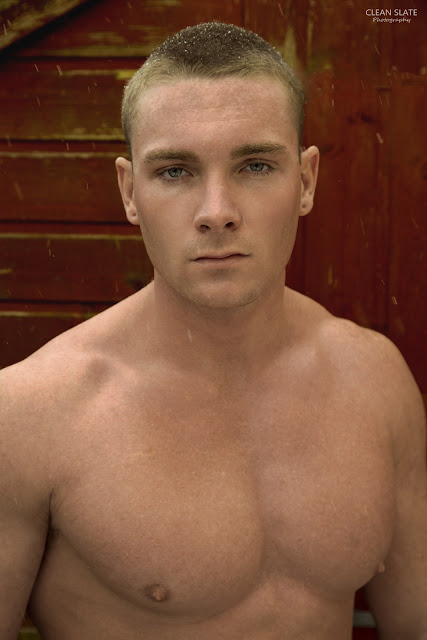 December was a bitch weather wise in the North East. Five, maybe six snow, sleet and ice storms, four in the span of 10 days. Christmas plans, parties and get-togethers were cancelled or postponed. Driving was treacherous, cars ended up in ditches and lives were lost. I lost power twice, once for almost 20 hours, but I was lucky, some lost it much longer, some still are in the dark. 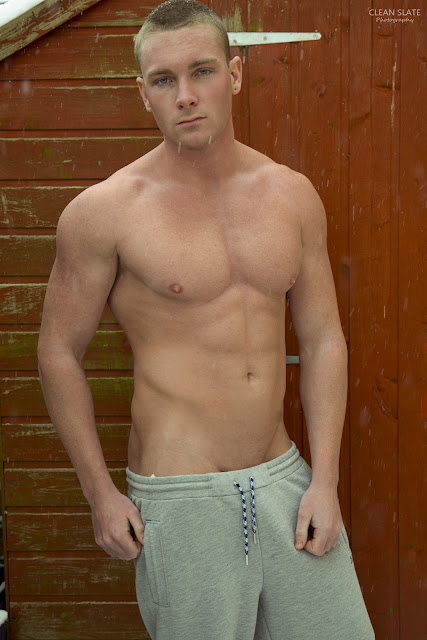 Most of these occurrences are usually saved for January, December traditionally has been quite calm, even mild. There were several years that I wondered if we would ever have another white Christmas. No such worries this year, it was white, it was plentiful, it was winter. I have had a love/hate thing with snow the last few years. Normally I love it, I like to play in it, I like to watch it fall, I like to ski and even tried snowboarding last winter. This year the snow has not been as giving a visitor. It showed up early, it showed up and loud and without the gifts it usually brings. It is only the beginning of January but it has already overstayed it's welcome. 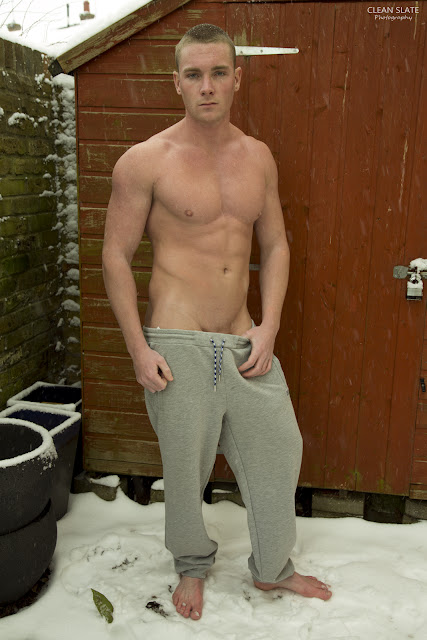 I am working hard to keep my love of snow alive and these images of studly Billy standing out in the snow have helped. Hell, Billy even has me loving grey sweat pants! When I was in search of some winter themed shots to begin the year with I went back to one of my favorite photographers, John from Clean Slate. The fact that Clean Slate is also the perfect sentiment for a piece written on January 1st was just a nice coincidence. 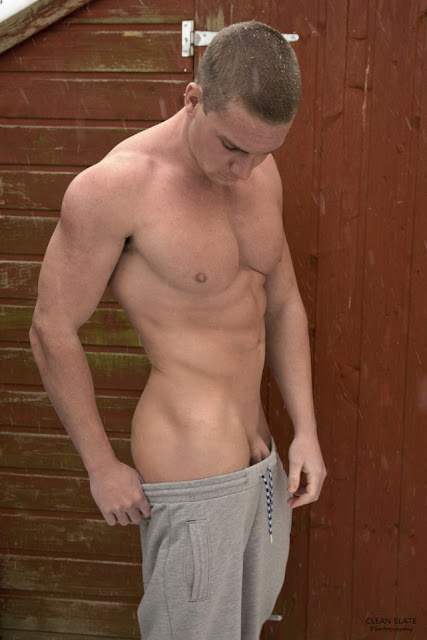 These images were actually shot in January, just not this January, but January of last year. John says they hadn't planned for an outdoor shoot, but snow is rare in Ware, the town England where John lives, so they decided to make the most of it! John reports Billy was keen on the idea, and although he looks calm in most of the images, it was very cold out that January day and they had to keep heading indoors every so often to warm up between shots. 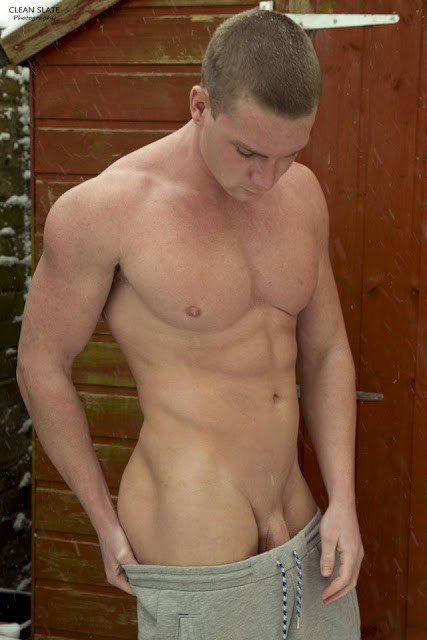 This was John's second shoot old Billy, the first being a couple of years ago. John says the 21 year old Essex model had grown a lot in confidence in between their shoots and that Billy knew he had a good body and how to best show it off for the camera. Billy does have an incredible body, obviously from a lot of hard work. I also love his soulful, almost sad blue eyes that beautifully contrast the rest of his body and the surroundings. 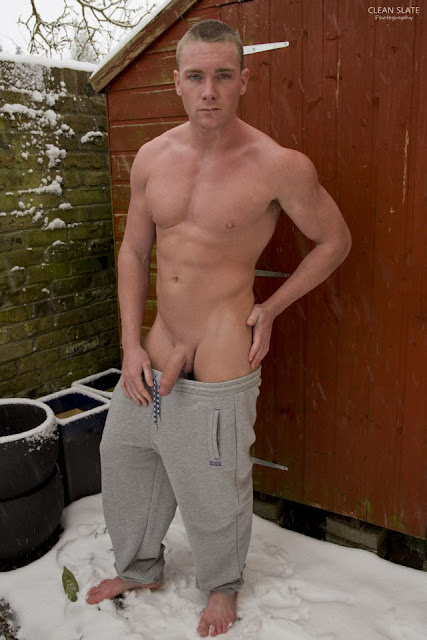 Although John does studio work, some of my favorite shots from him are location shoots. Whether with Billy out in the snow, taking models into abandoned forts and run down buildings or outside with Joe, the first feature I did of John's work in 2012 (Exterior) John is keen to work with new or experienced models so if your in, or visiting the UK and looking to shoot, be sure to get in contact! 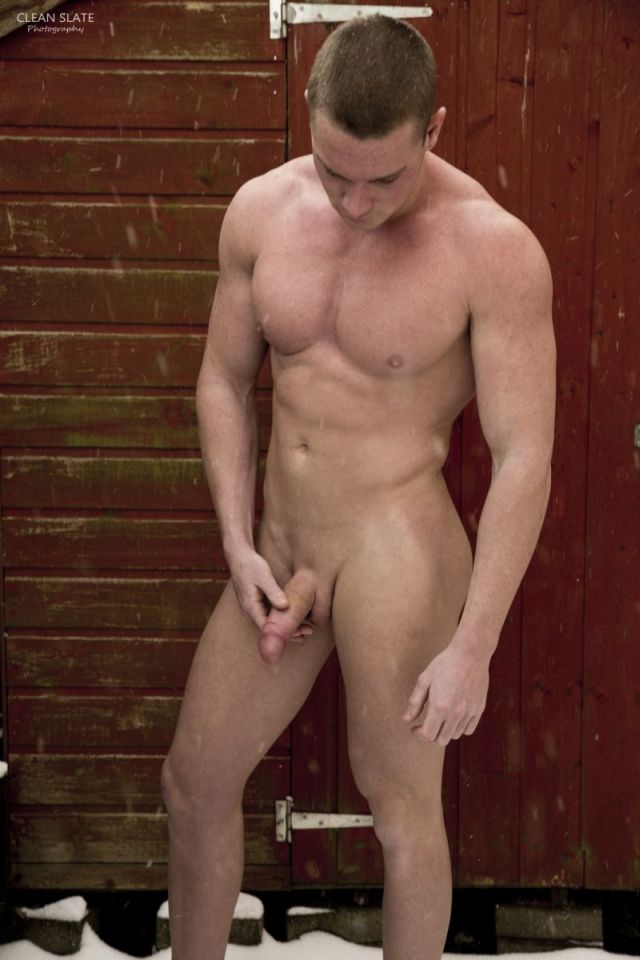 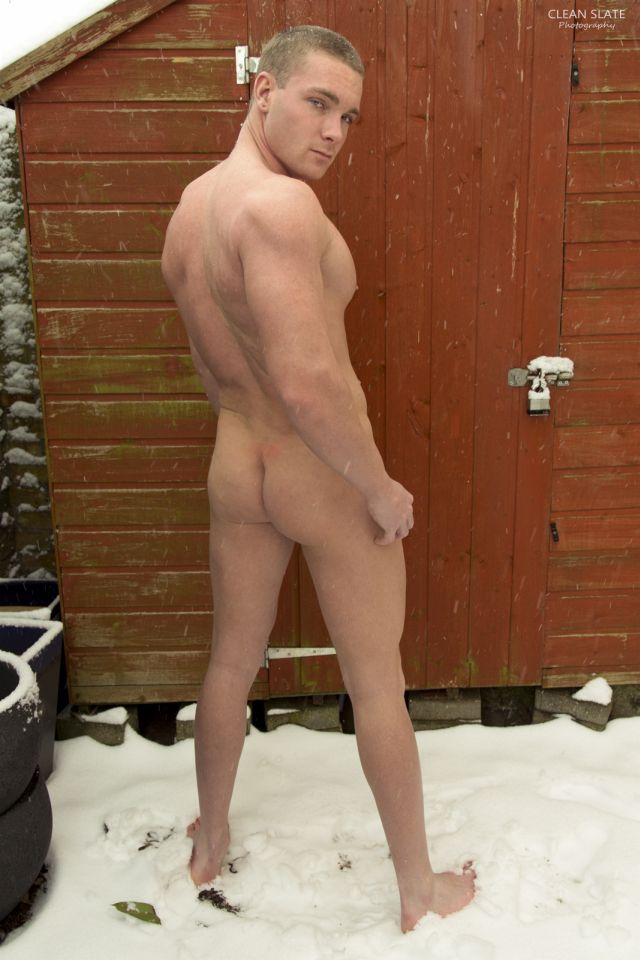 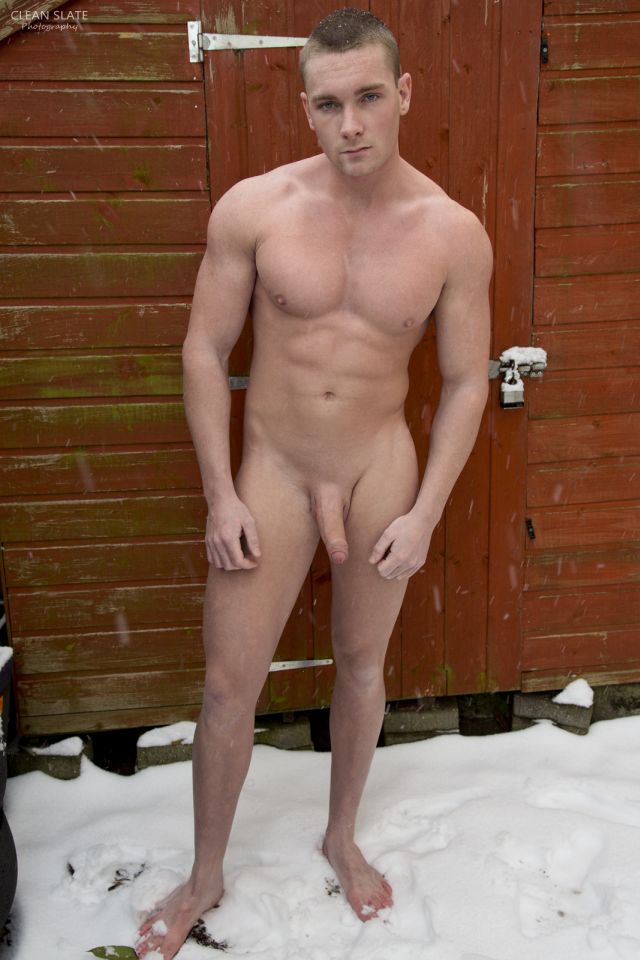 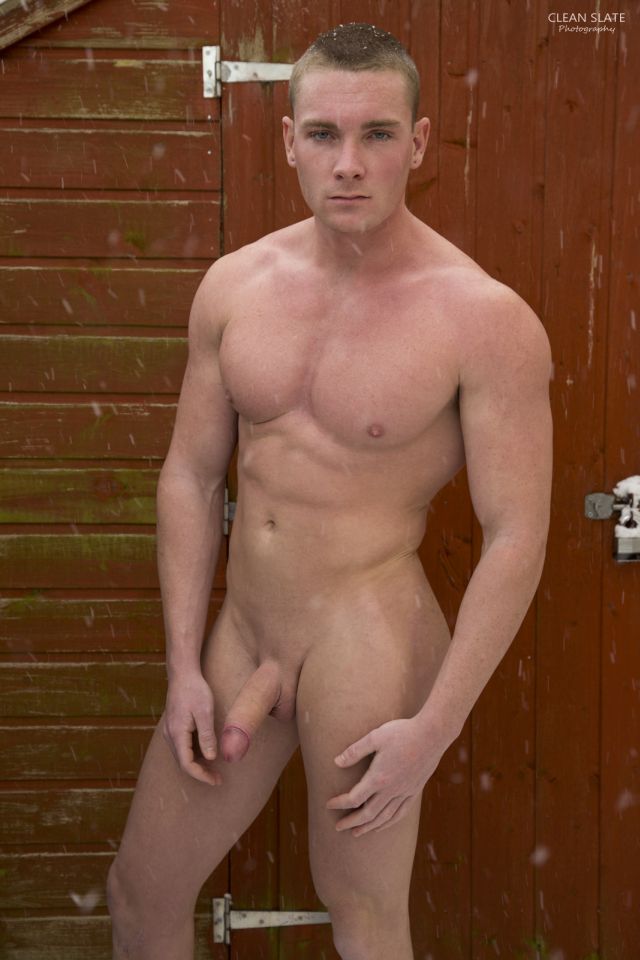