Favorite Pic of the Day for May 8th 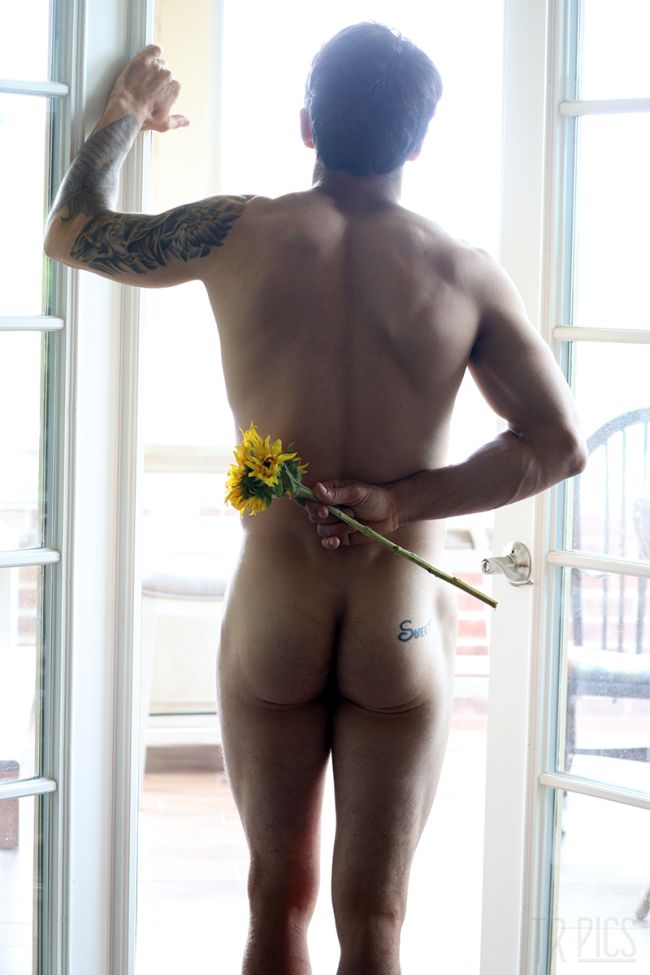 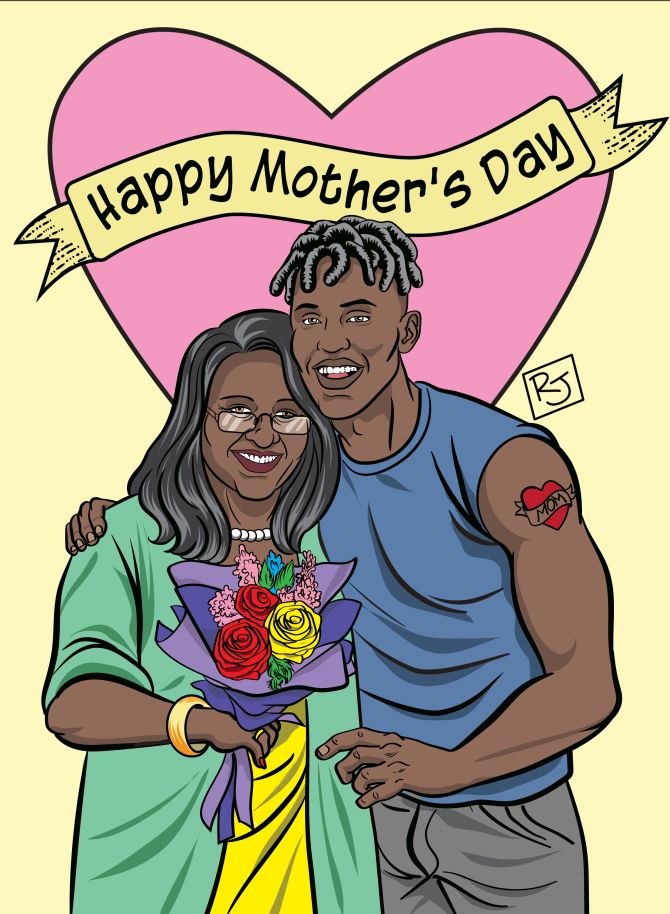 Original Artwork by badsign769
Happy Mother's Day!
To all those celebrating with their mothers today, and to all those who for various reasons, cannot. I miss my mother every day, but I'm also fortunate to have had many mothers in my life.  An aunt who always keeps in touch, an older cousin who likes to nag, a neighbour who bakes for me and an older co-worker who still tries to fix me up, with women...
at May 07, 2022 No comments: 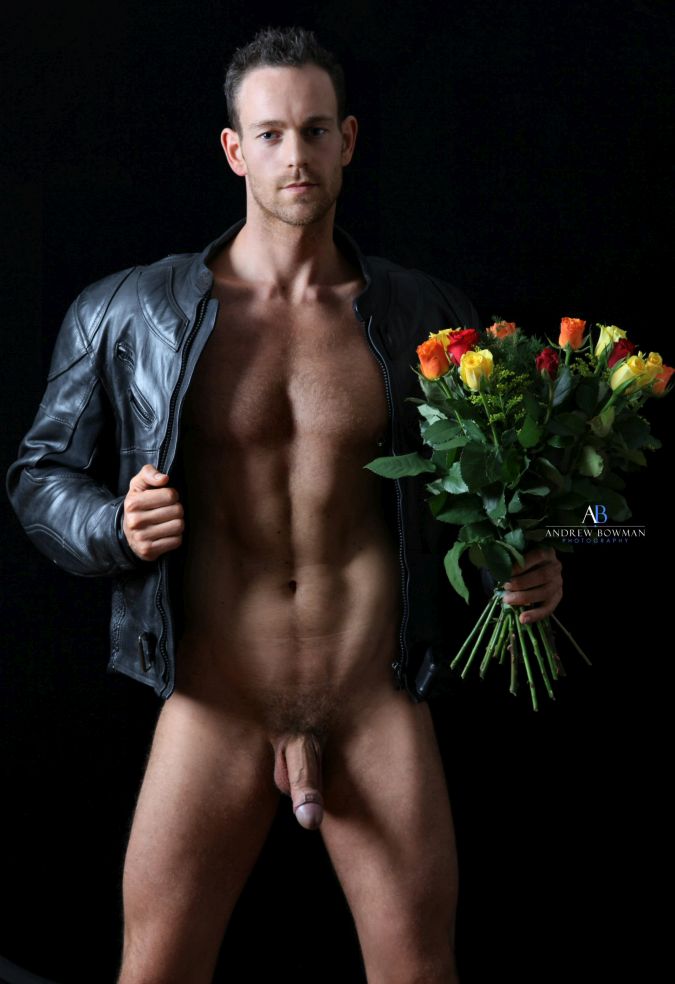 There is no more universally shared symbol of Mother's Day than the flower. 🌺 There's also no better fotog of the flower than photographer Andrew Bowman.  I've been lucky to have been able to share many of Andrew's petal pictures over the year.  Check out some of my favorites on the NEXT PAGE HERE: 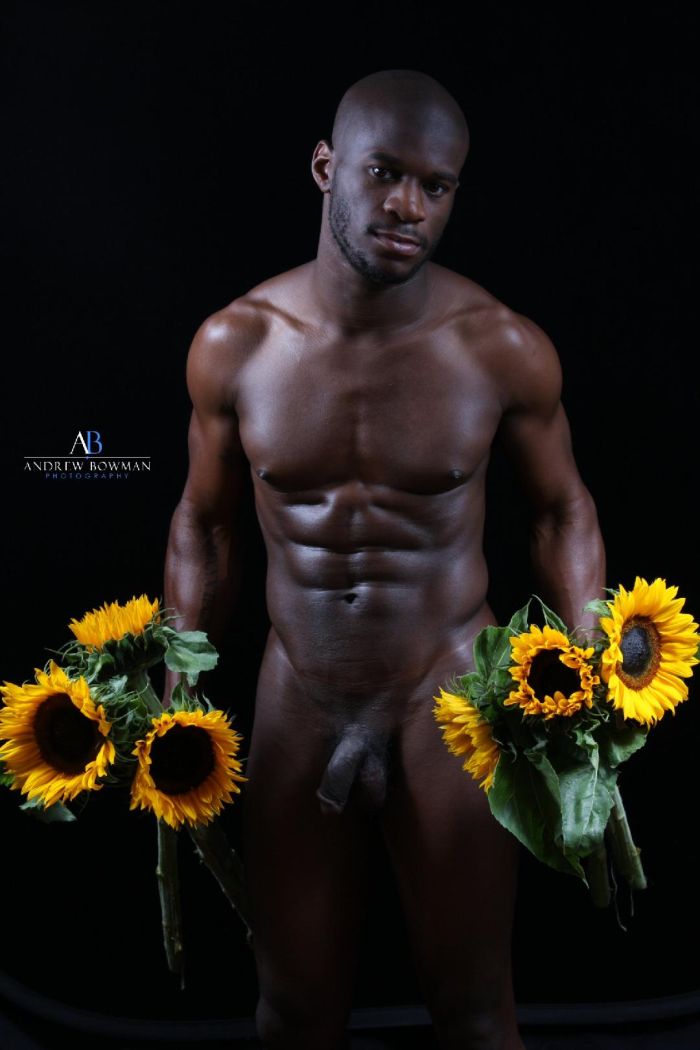 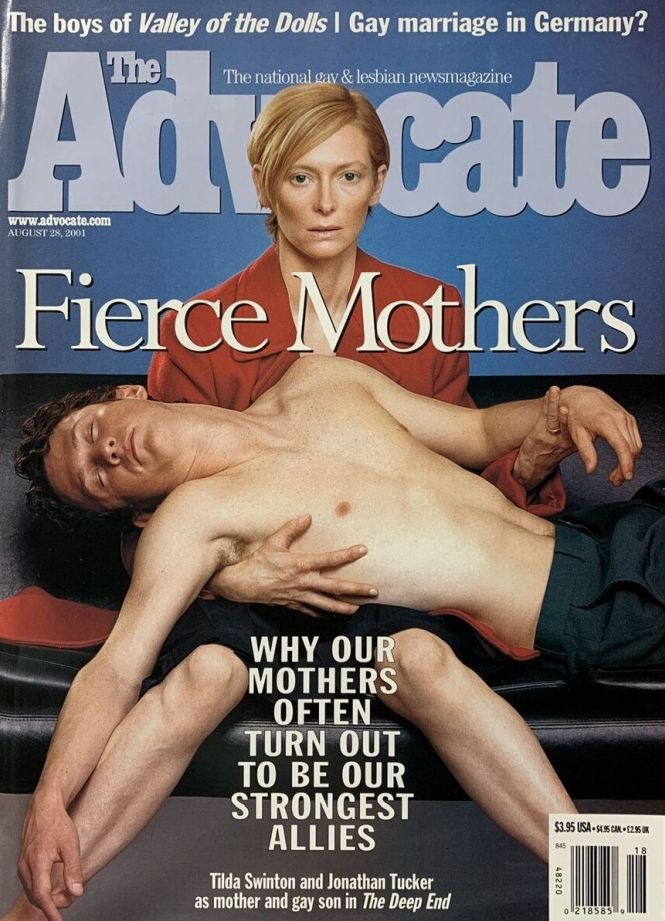 'A woman spirals out of control while trying to keep her son from being found culpable in a murder investigation.' 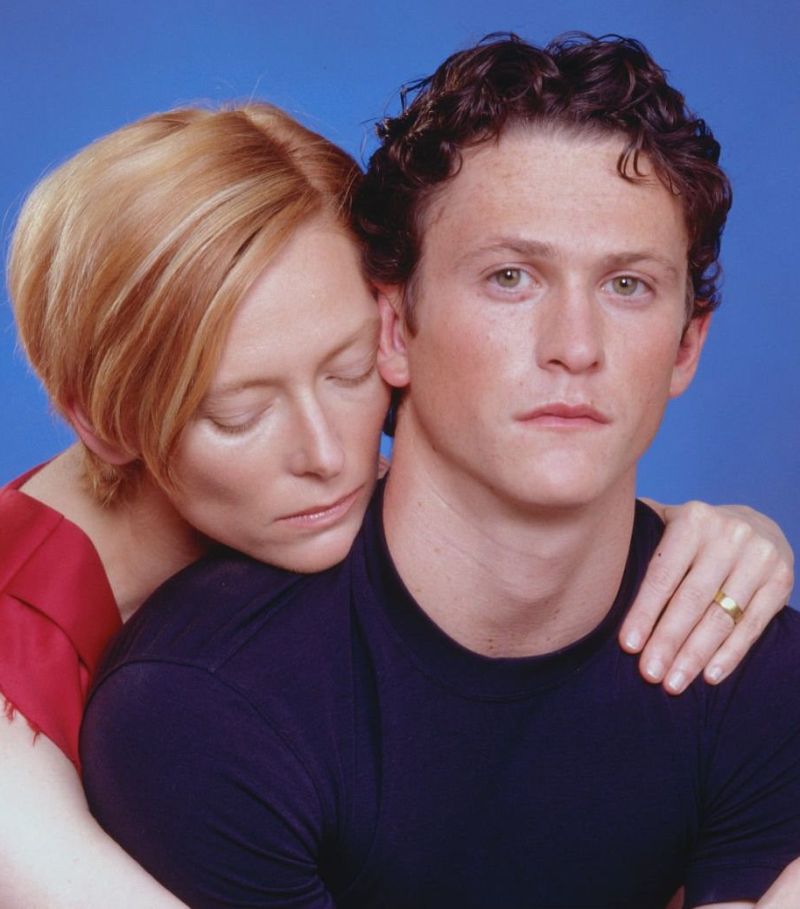 There are many  movies about fierce mothers, but few go so fare as Margaret, (Tilda Swinton) goes to protect her son Beau, (Jonathan Tucker) in 2001's The Deep End.  After  Beau's older lover (Josh Lucas) is f found dead on the beach, Margaret goes to great lengths to protect her son from taking the fall.  Thinking of this film had me thinking about my lengthy crush on actor Jonathan Tucker.  Seemed time for another Actors & Skin post.  Check out the next page for the Actor HERE:  and the Skin. HERE: Even on Cloudy Days: Jessie by TR Pics 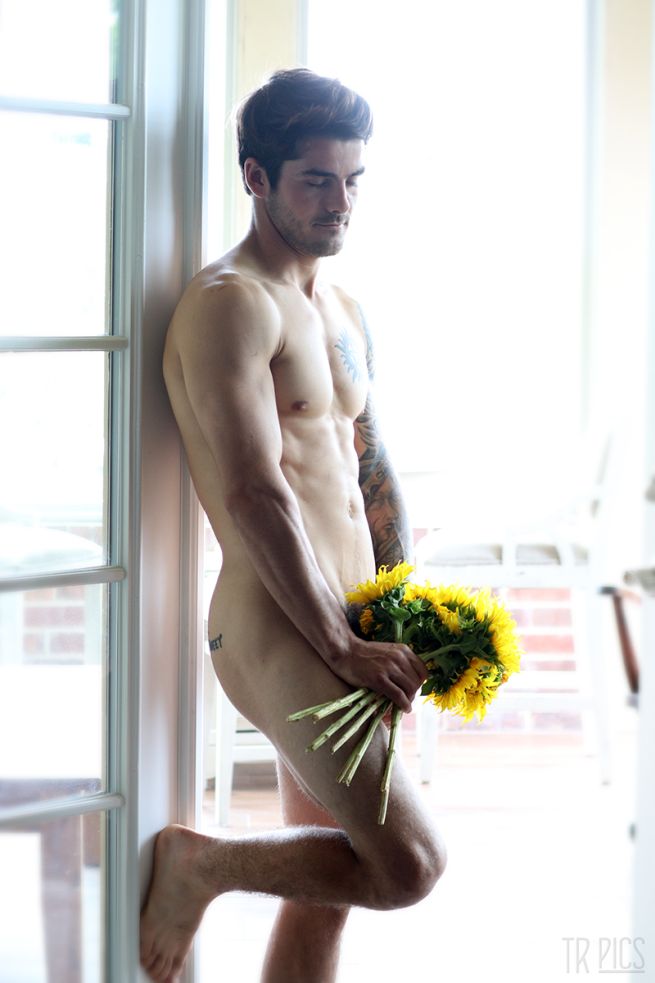 'The sunflower follows the sun, even on cloudy days.' 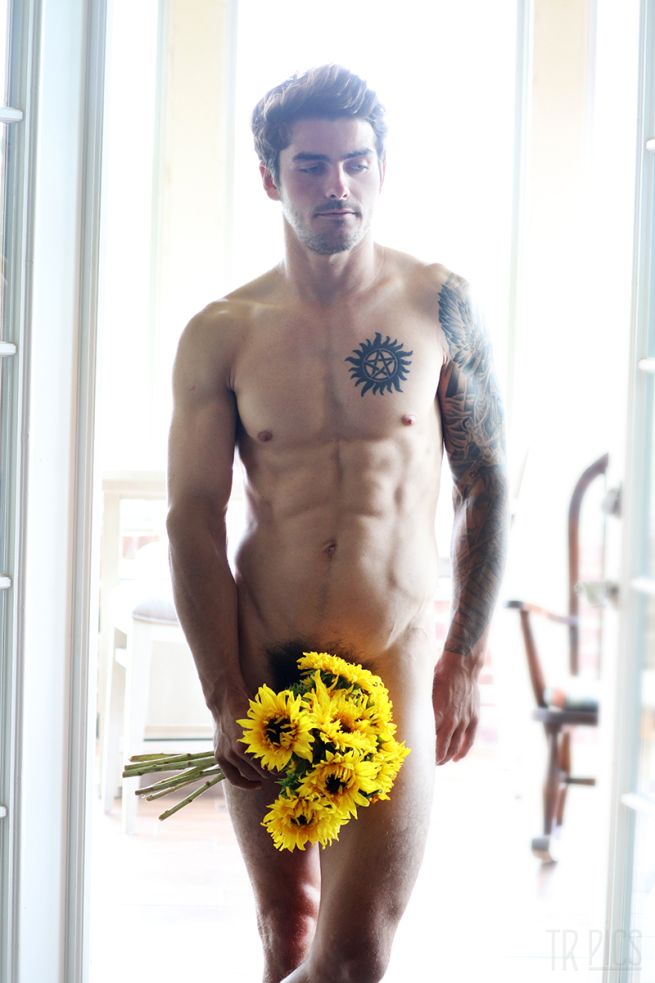 Many of you may remember my sunflower 🌻 story. I've referenced my connection to the Helianthus annuus  previously on the site. (HERE:)  I even did a sunflower themed series a couple of years later. (HERE:) My mother hated flowers.  Flowers, and especially their pleasant scents, reminded her death, from the the many funerals she attended as a child. The sunflower however, was the only flower my mother could tolerate, the only flower we were able to present her with on her birthday and on Mother's Day. 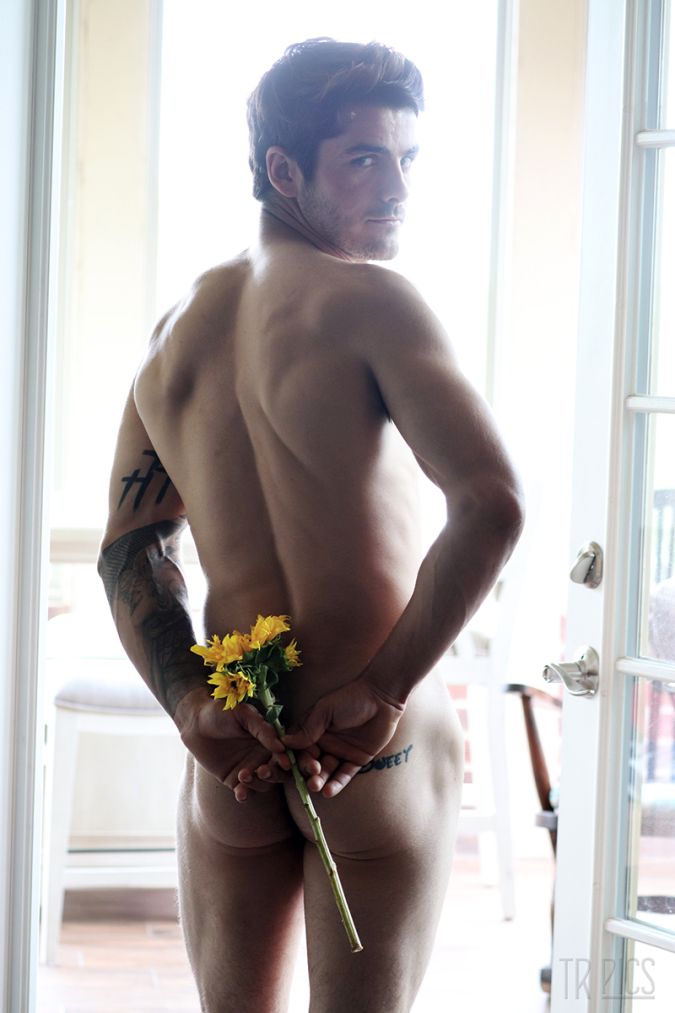 Upon her death, I inherited her love of the flower.  I now usually plant sunflowers each Mother's Day to honor her life and her love of the flower.  They're planted in early may, then bloom around the time of her birthday in August.  In addition to their beauty, sunflowers also have many uses.  Their pedals can be used to create a vibrant yellow dye, their seeds become snacks for humans, animals and birds and the oil they produce is used to make a healthier cooking oil.
Sunflowers are also one of the strongest flowers in the garden.  If anyone's grown them, you know how hard and sturdy their stocks can be.  I've grown both the colossal and skyscraper types of the flower, and had to use a saw to cut the stocks in the fall.  I also love how stubborn the flower can be. It's goal is to follow the sun, even on cloudy days.  That's determination! Although they're only in full bloom for about 20 days, if you've ever seen a sunflower field or garden up close, it's a site to behold. 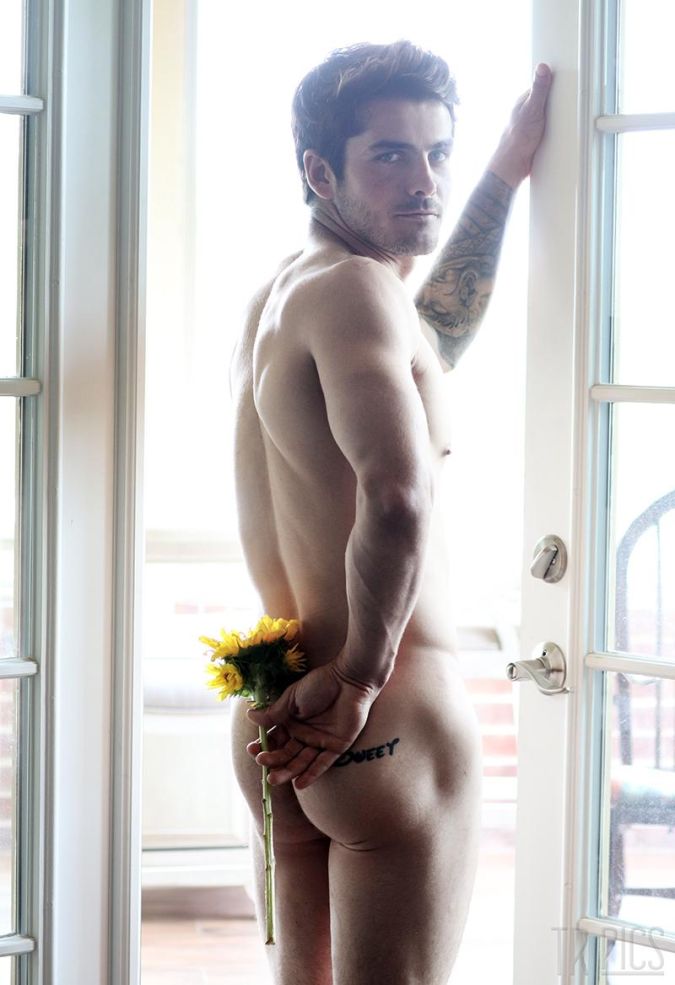 Speaking  of sites to behold, I can never get enough of the beauty and hotness of Jessie, and his work with Tom from TR Pics.  When I first featured Jessie's work with the Dallas based photographer last fall,  (Jessie's Secrets) Tom sent on a variety of looks and themes from his many shoots with Jessie.  Included in the selection of shots were a two images of Jessie holding sunflowers.  I asked Tom if he was ok if I held them back to use on Mother's Day.  Tom was very supportive of my request and even went back edited a few more for me to include.  Can't think of anything better to help celebrate Mother's Day than a strong, striking flower being held by a strong, striking, and naked Jessie Smith! 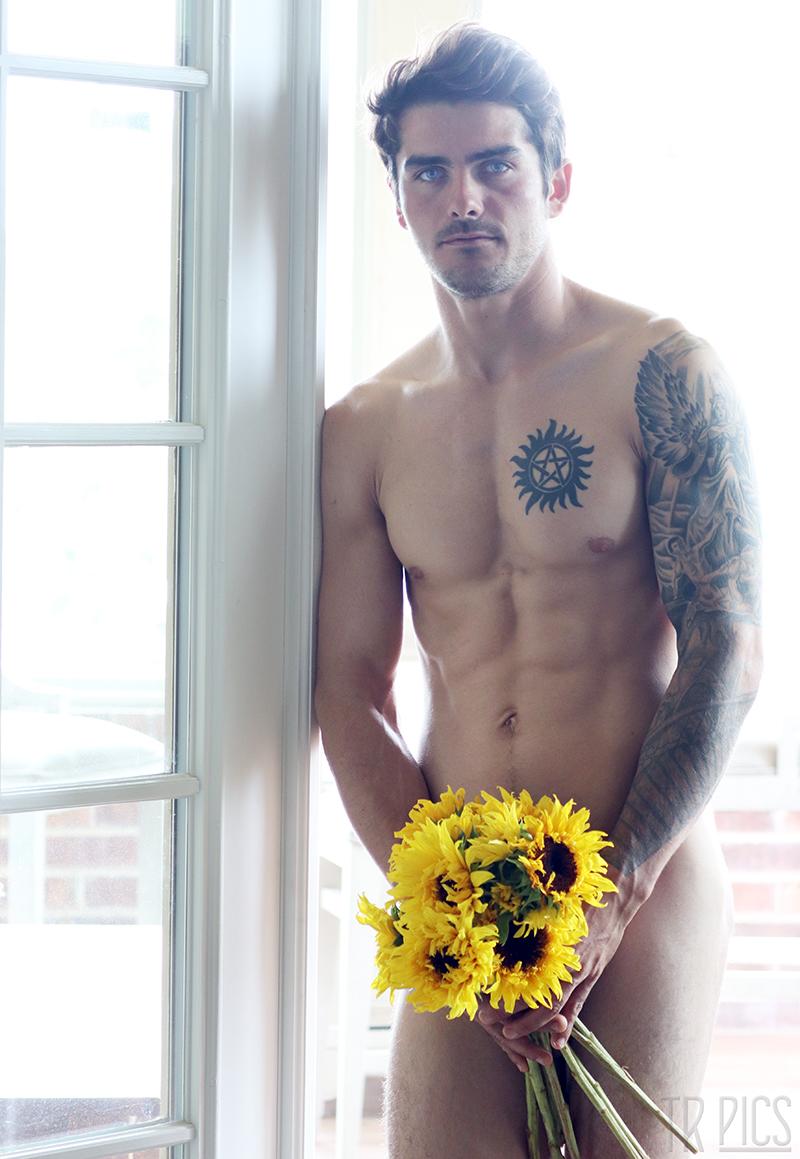 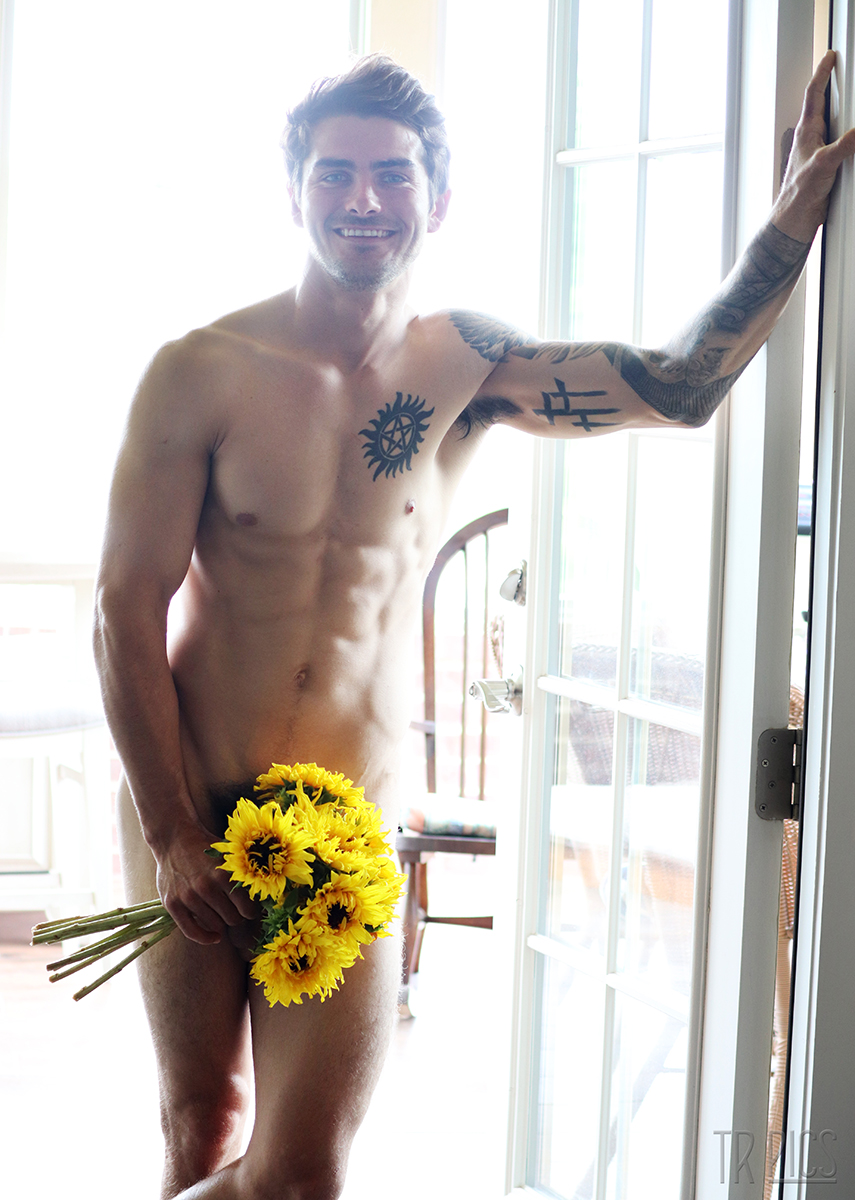