Favorite Pic of the Day for September 5th 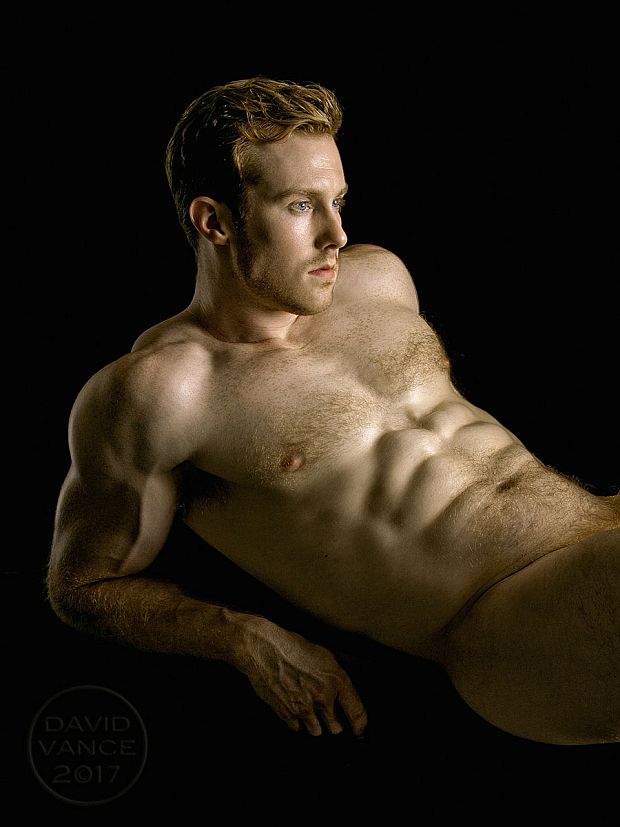 Above:
Kevin Selby by David Vance
-See More Below- 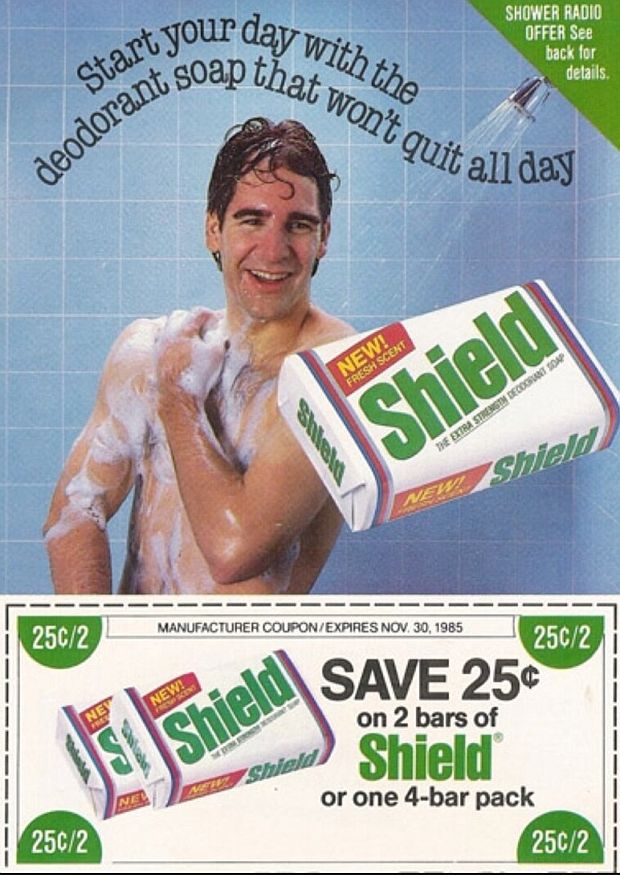 Scott Bakula for Shield soap in the early 1980's. I don't think I have ever seen an episode of Quantum Leap, Enterprise or NCIS. I did however, fall in lust with Scott after watching him sing and dance on the 1989 The Tony Awards during his time on Broadway in Romance Romance. 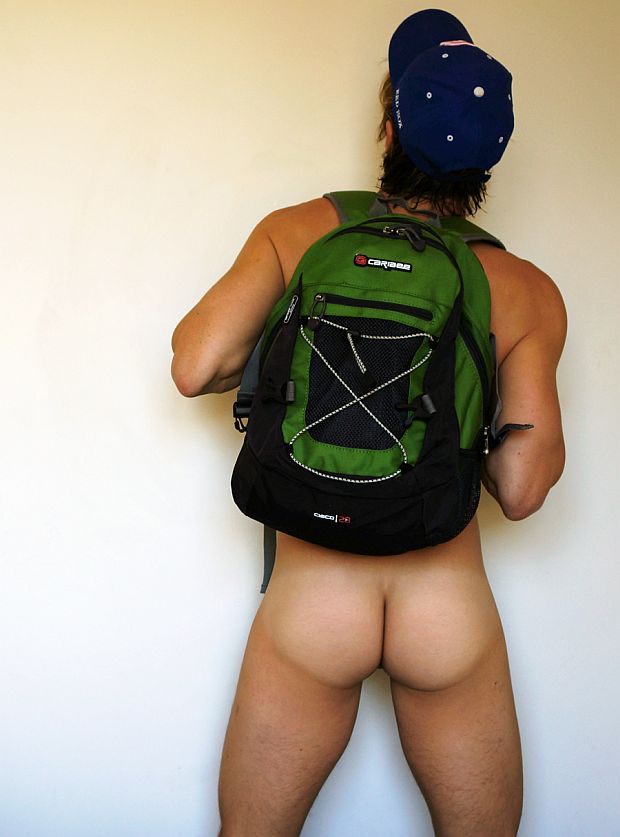 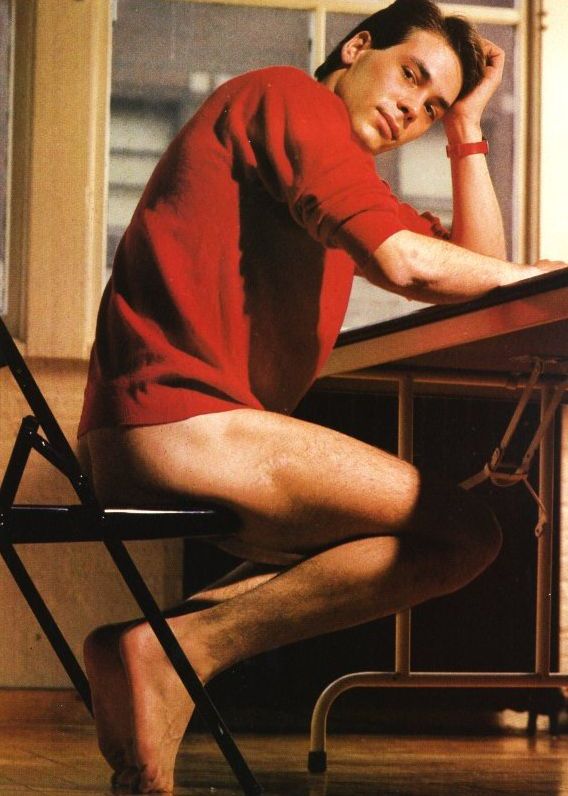 Back when Playgirl was a monthly magazine, every year, usually at back to school time in September, there was a salute with an array of hot student bodies. In the 80's, the feature was called Ivy League, later, it was usually titled college men and eventually, the feature was named Campus Men, a name that continues today.

I am not sure how many of those college men they featured were actually in college, but the earlier versions of college men did indeed appear to be students. Heading into the Playgirl on-line archives, I decided to feature some of my favorite Ivy League hunks from the 80's. 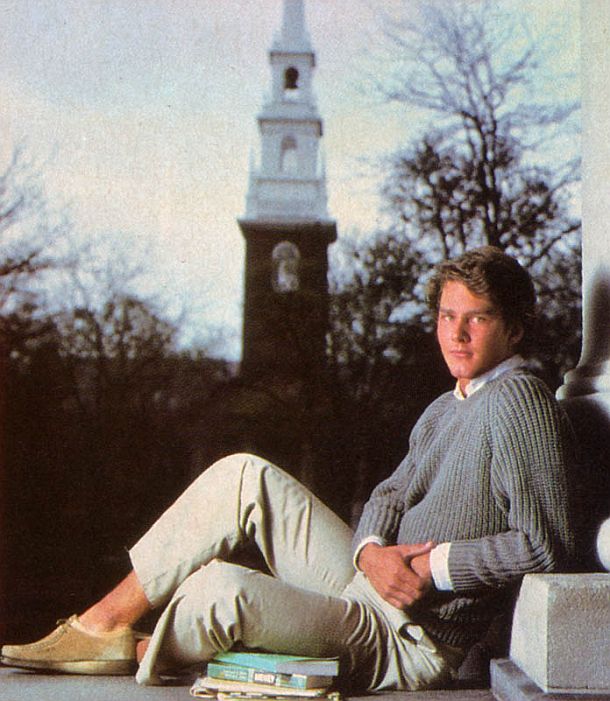 '19 year old Economics major Mark Palm plays polo and would like to someday parachute for the sheer adventure of it. His philosophy of life is to live each day to the fullest.' 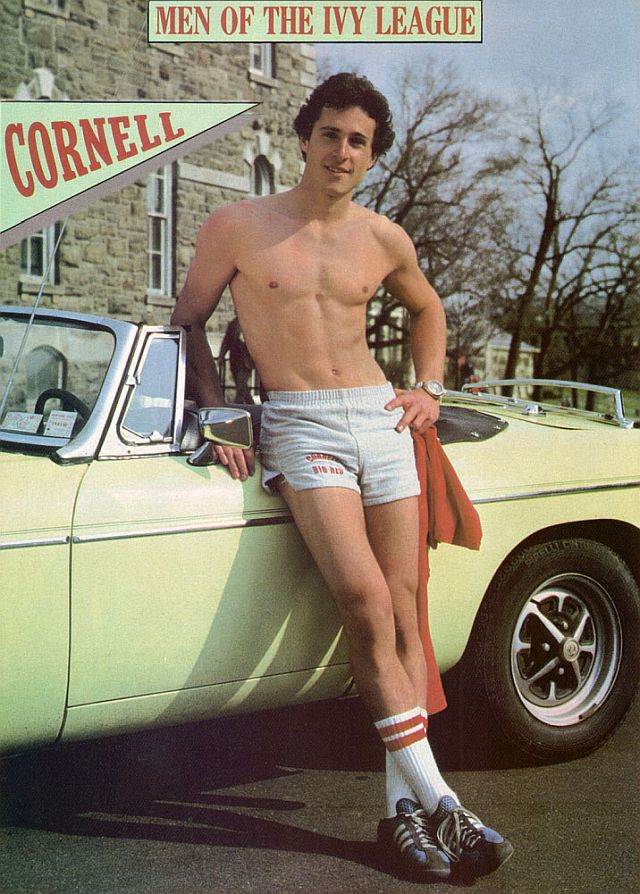 'Steve Potosky takes his life one day at a time. A labor economics major, Steven would like to take a few slender blondes for a ride in his car for a day of golf, tennis and what ever else follows from that.' 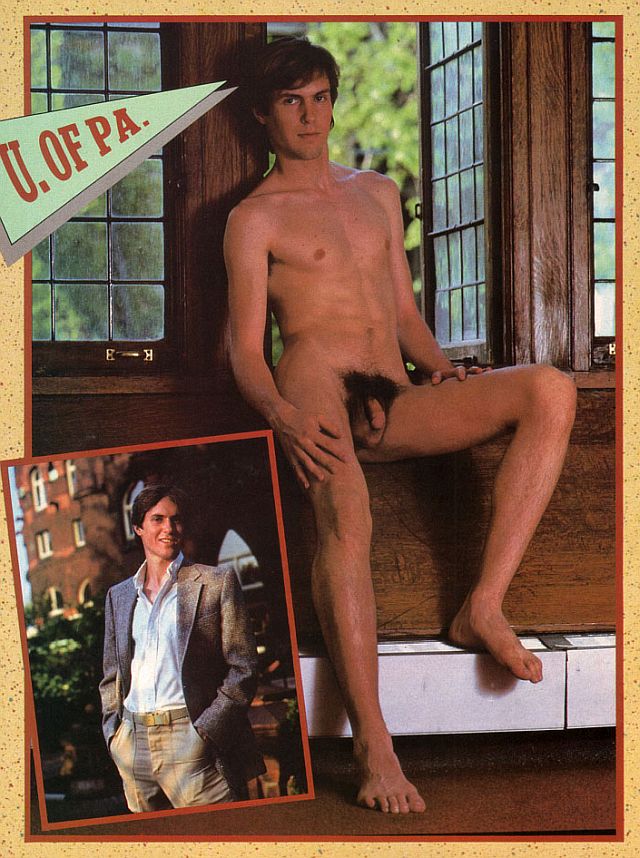 'Thomas Smith is studying to be a film director one day. At 23, he sees films at every opportunity. For Thomas, sex is only one part of a relationship, just the icing on the cake!' 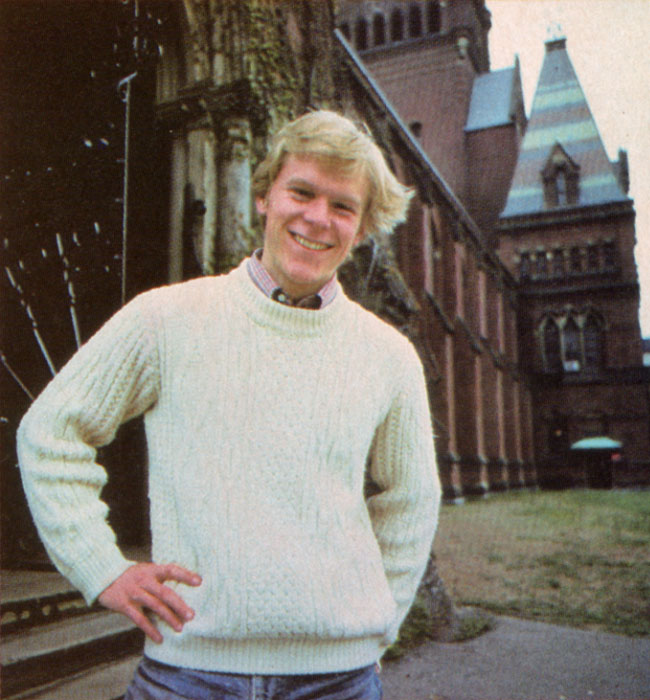 'David Hall is a 22 year old American literature major who enjoys lifting weights and throwing Frisbee. Openness and mutual given and sharing make for good sex in David's mind!' 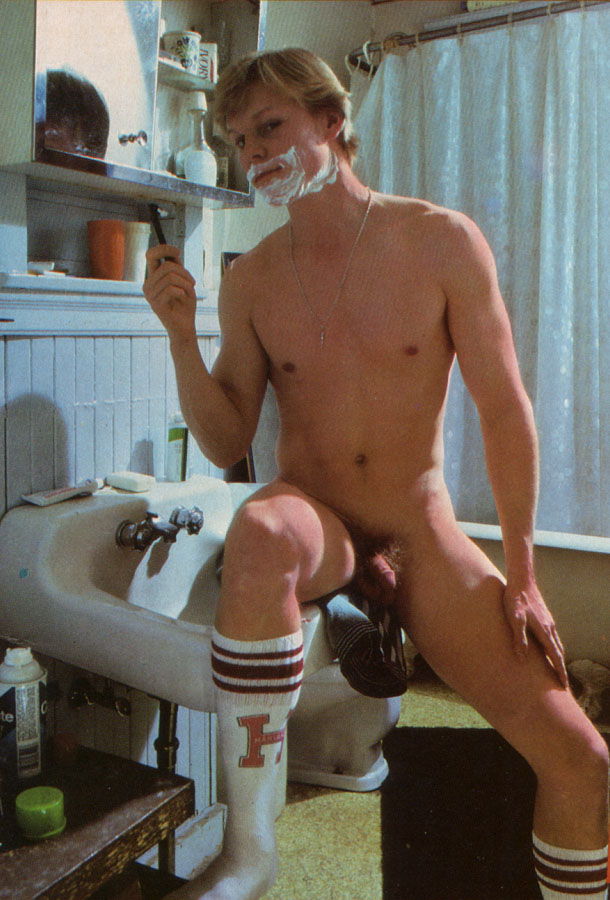 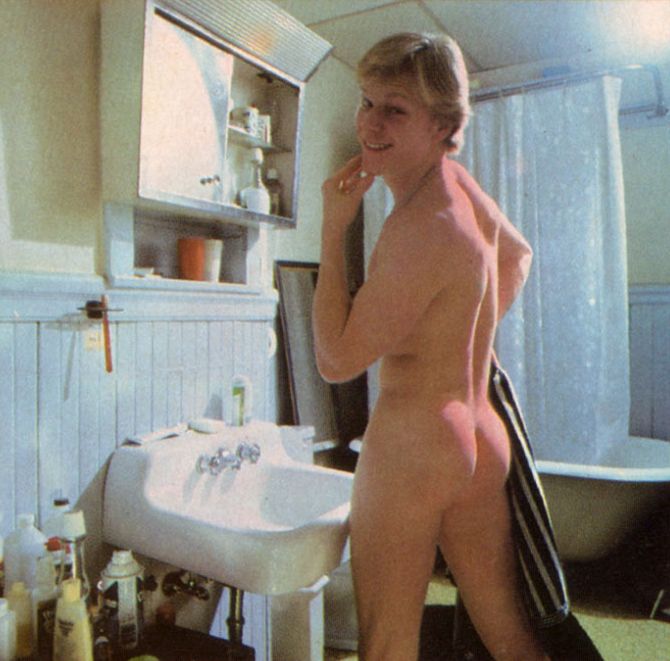 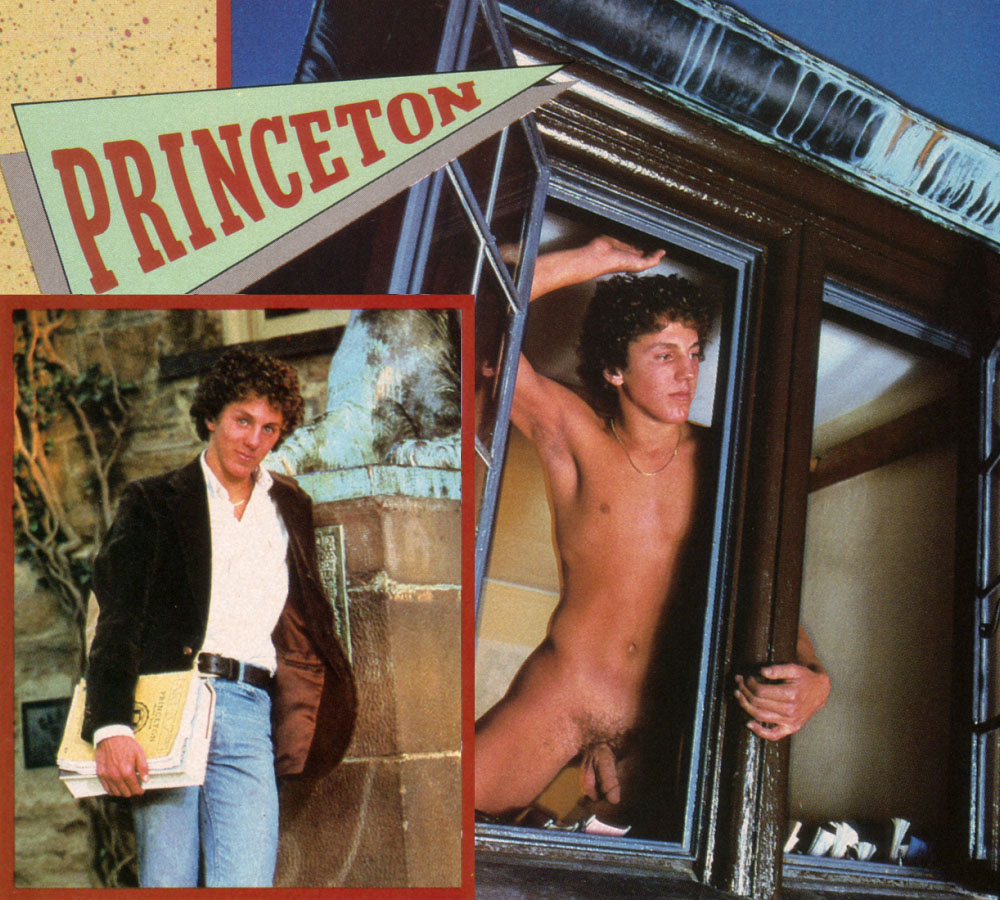 'Twenty year old John Katzman is an architecture major who also skis and plays football and lacrosse. In ten years, he hopes to be wealthy and skiing in the Alps!' 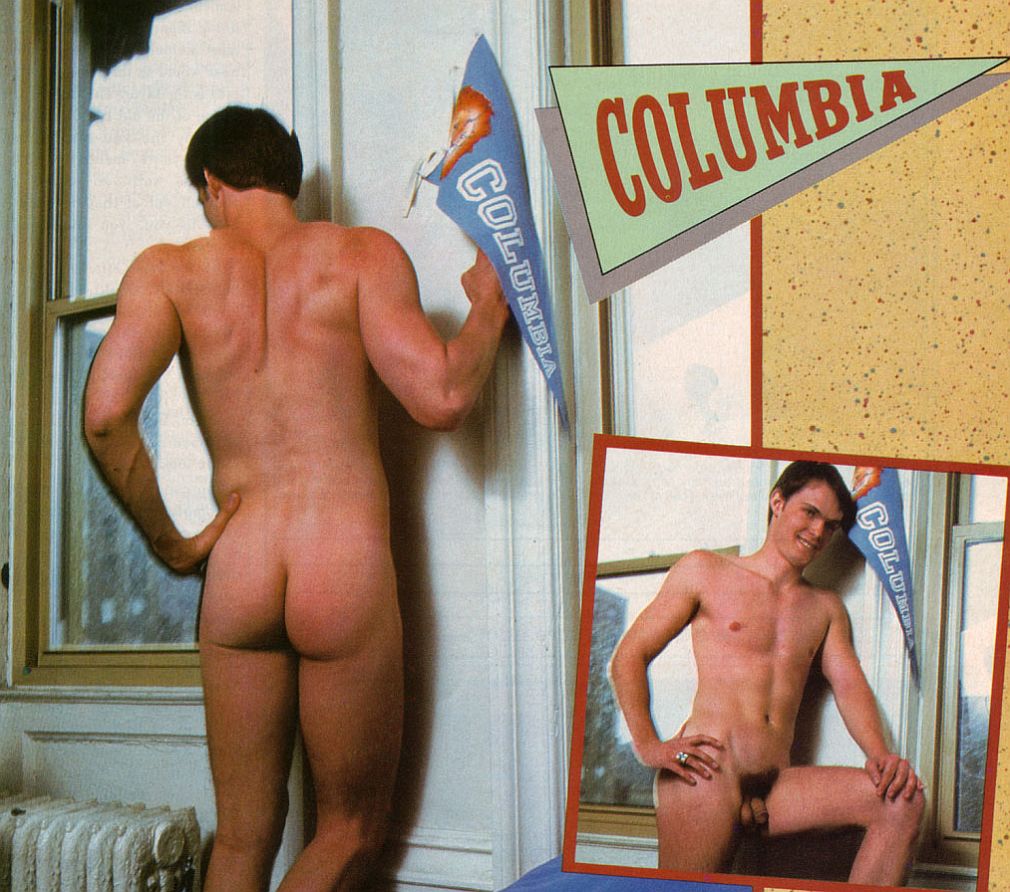 'Ryan is a computer science major and at 21, tries to take advantage of every opportunity presented to him. A pole vaulter and former football player, Ryan feels it's important to approach sex, with an open mind. 'If it feels good, do it!'
at September 04, 2017 No comments: 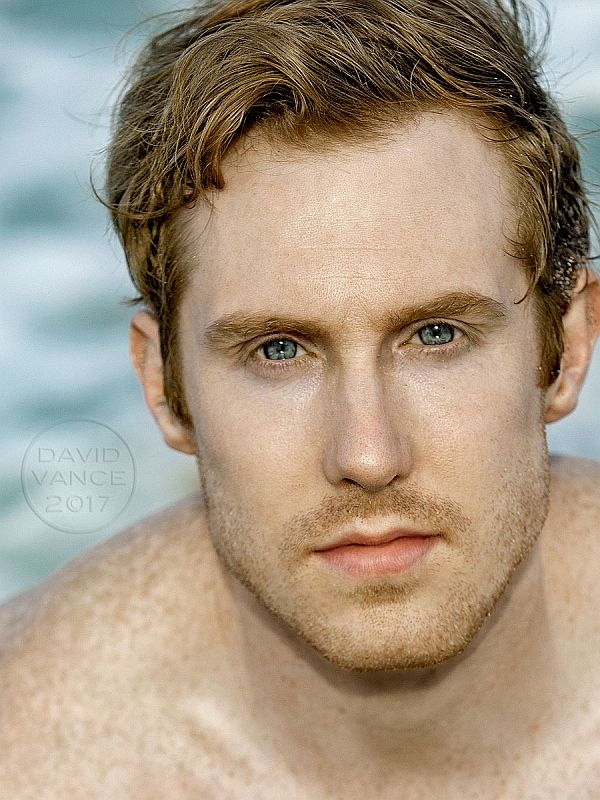 'Some models come and go like a one night stand which is fine, but there’s nothing quite like working with someone with whom you’ve developed a bond. We inspire each other and the end result is never disappointing.' 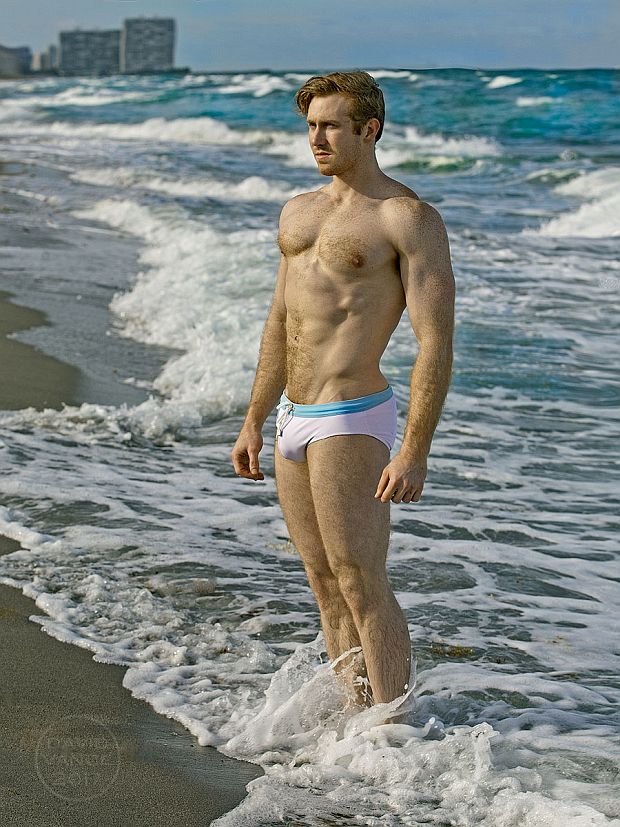 Photographers and models frequently have to adapt to creating visual intimacy with strangers. The business demands that many collaborations consist of artist and model meeting for the first time on the day of the shoot. The model, usually then must immediately remove most, or all of their clothing. The photographer, then must quickly find a creative approach in capturing something beyond just the body posing in front of them. 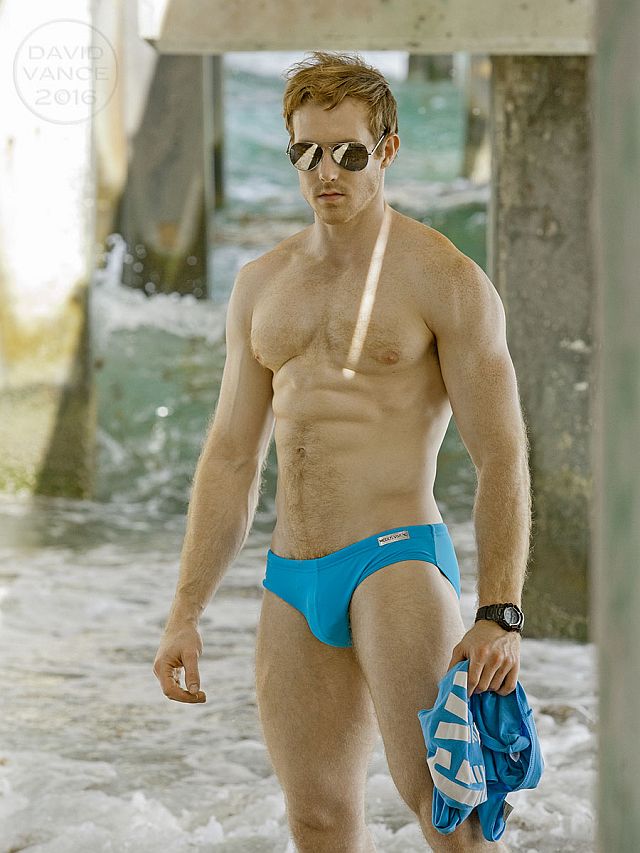 Many skilled photographers, despite these circumstances, are able to create great images of incredible bodies. Many models, are able to deliver, regardless of who is behind the camera. Many of my favorite shoots though, tend to be from photographers and models who over time, have developed both a trust, and a creative nexus with one another. Photographers who not only know how best to shoot a particular model, but how to push limits, and bring out pieces of their personality that a stranger could not. Models, who are not only relaxed, but completely at ease with putting their trust in the creative impetus in the artist behind the lens. 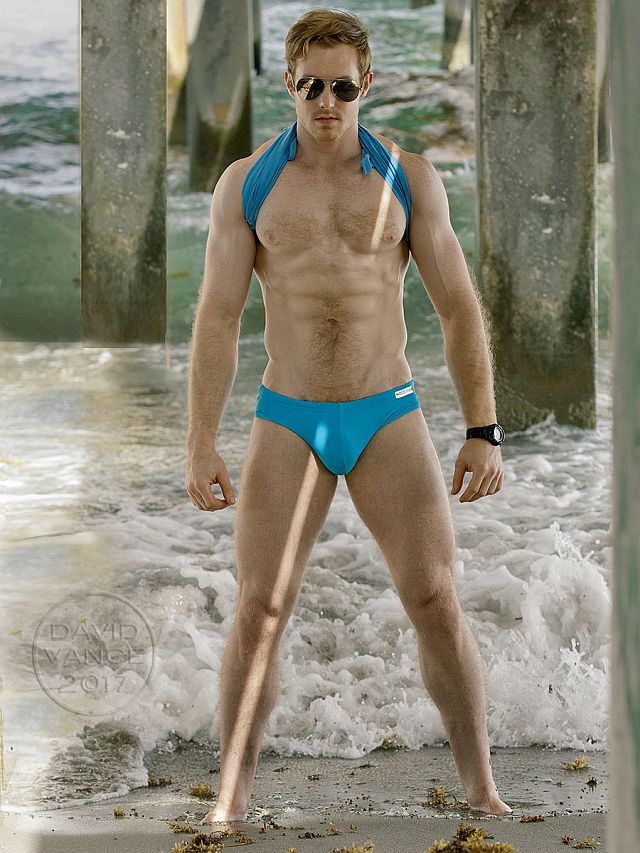 One of the first times that I featured the work of Florida's David Vance, my focus was on his work with model and friend Nathan Wessel. (Collaboration) David and Nathan had shot together countless times and had worked together on various projects and creative enterprises. There was a layer of creativity in their work together, a visual depth that let me to contact David about featuring the images. I felt those same things while enjoying David's work with model and fitness specialist Kevin Selby. 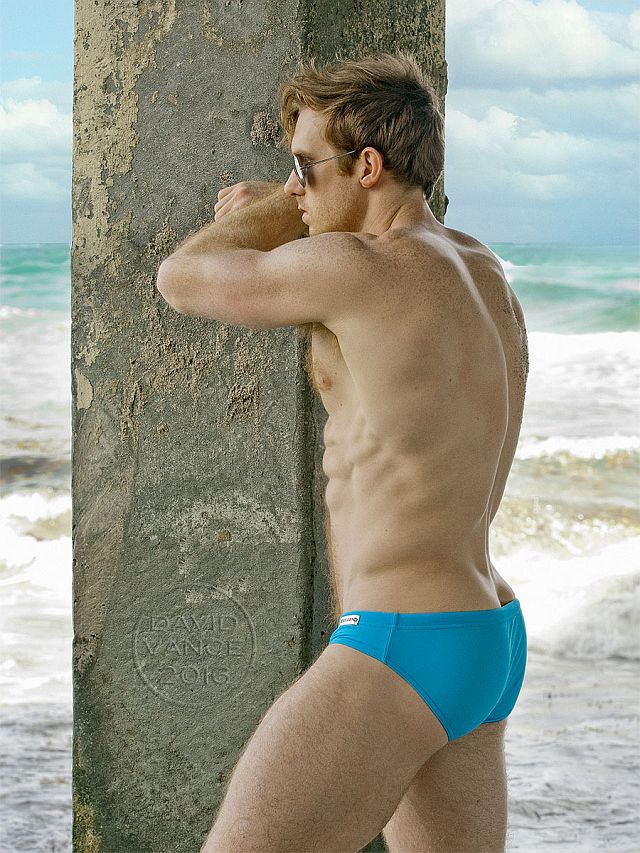 Many of you are familiar with Kevin's work, his blue eyes, great smile and magnificent body have appeared in magazines and on-line features extensively over the past few years. David first began shooting with Kevin back in 2013 after they met on Facebook through photographer Joem Bayawa. David shares they have shot a couple of times each year since then and have developed a close personal friendship which David says makes shooting with Kevin even a greater pleasure. FH readers have seen, and read about my love for gingers over the years, but David reports he never really realized he had a soft spot for gingers, until he began working with Kevin. 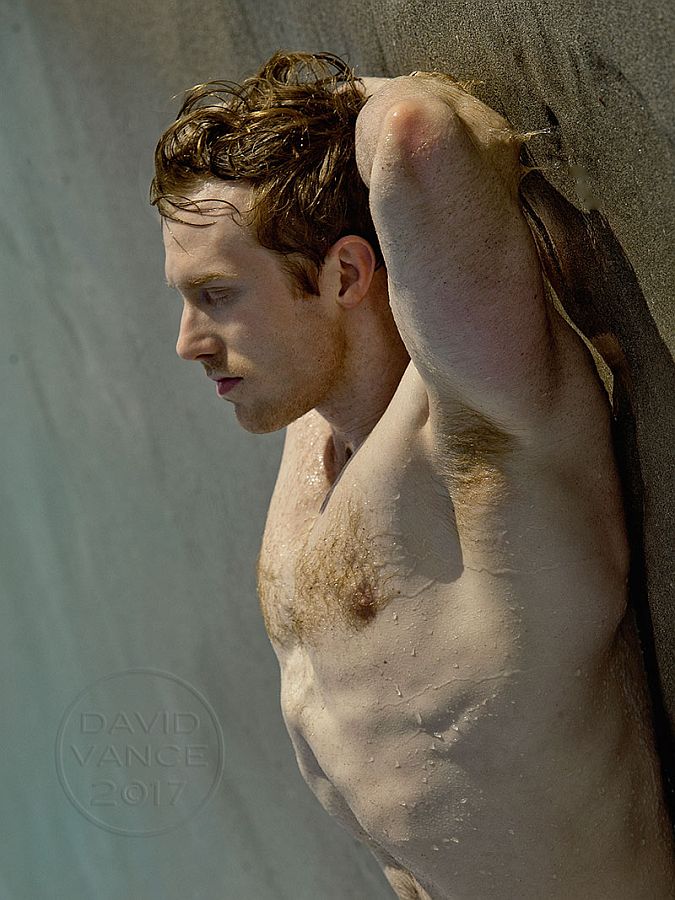 'Kevin is truly one of a kind..a very beautiful human being with a generous, kind heart. He truly loves helping others and works really hard as a trainer as well as a model.' 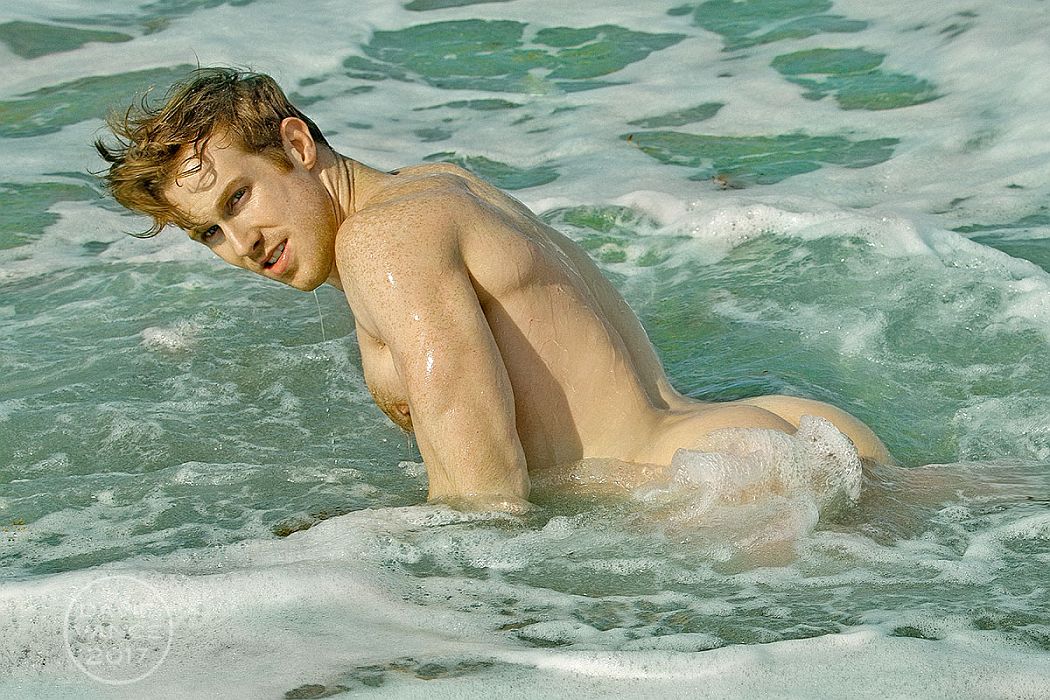 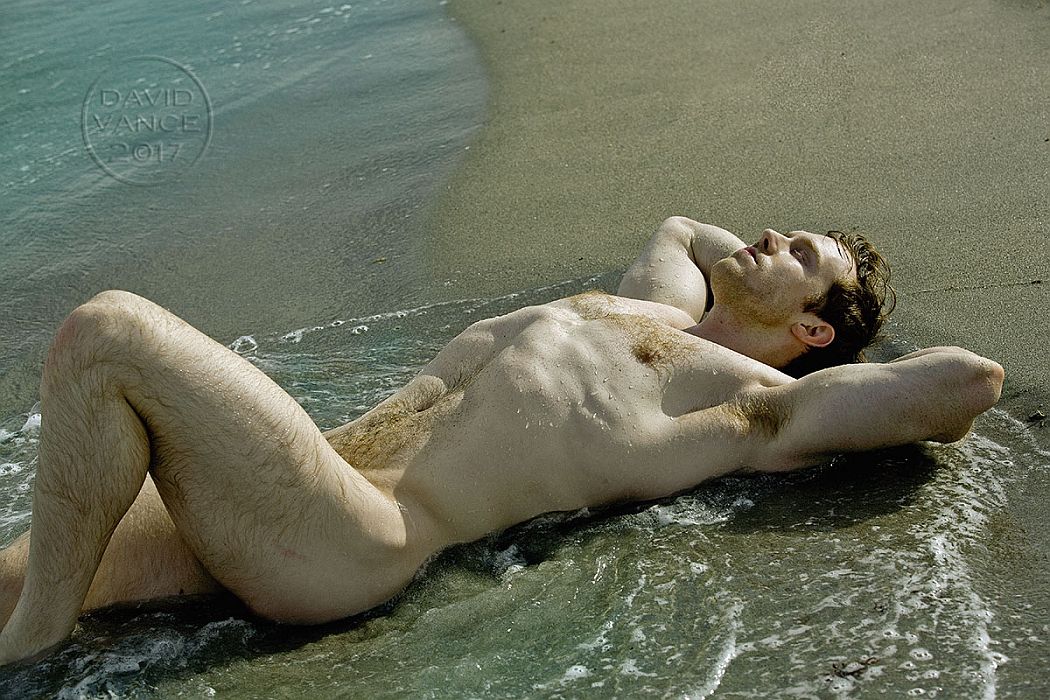