Favorite Pic of the Day for April 6th 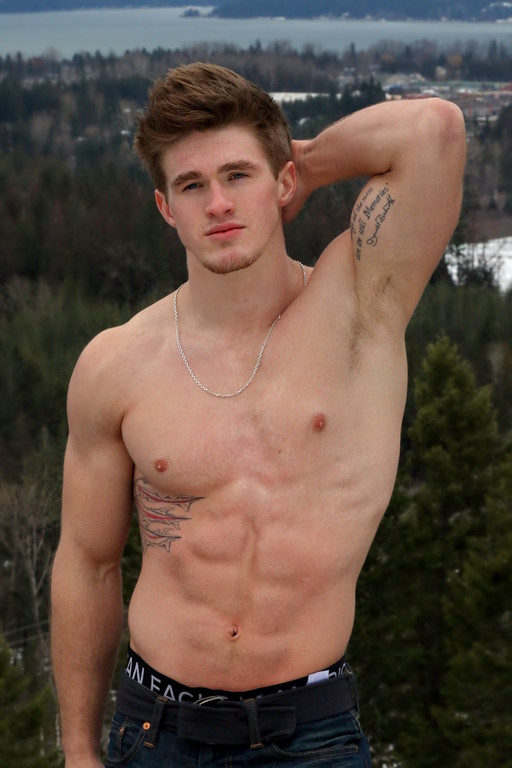 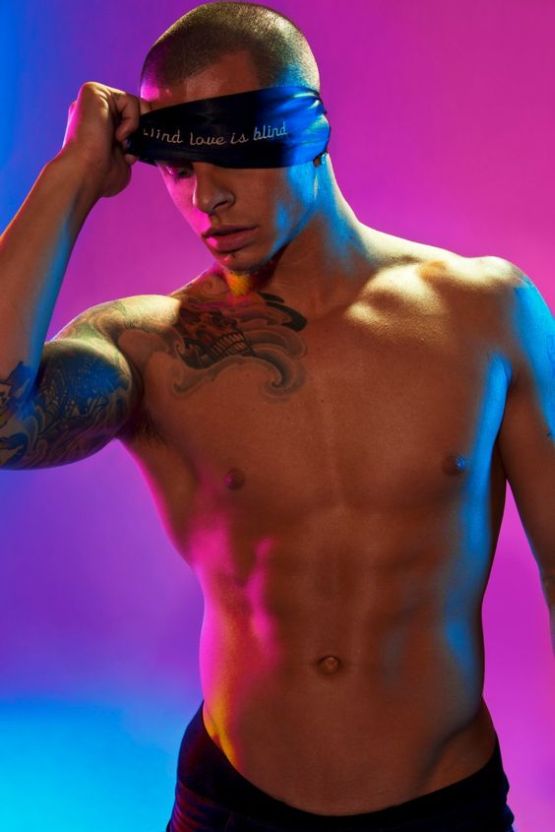 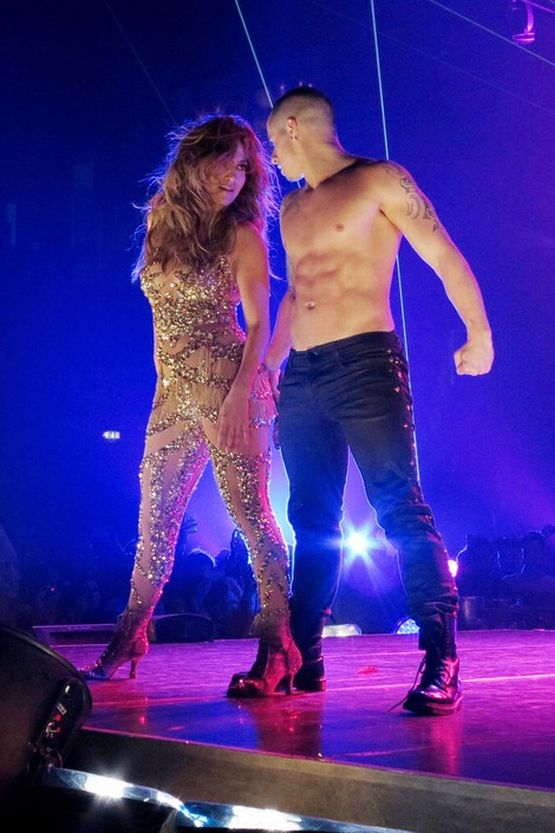 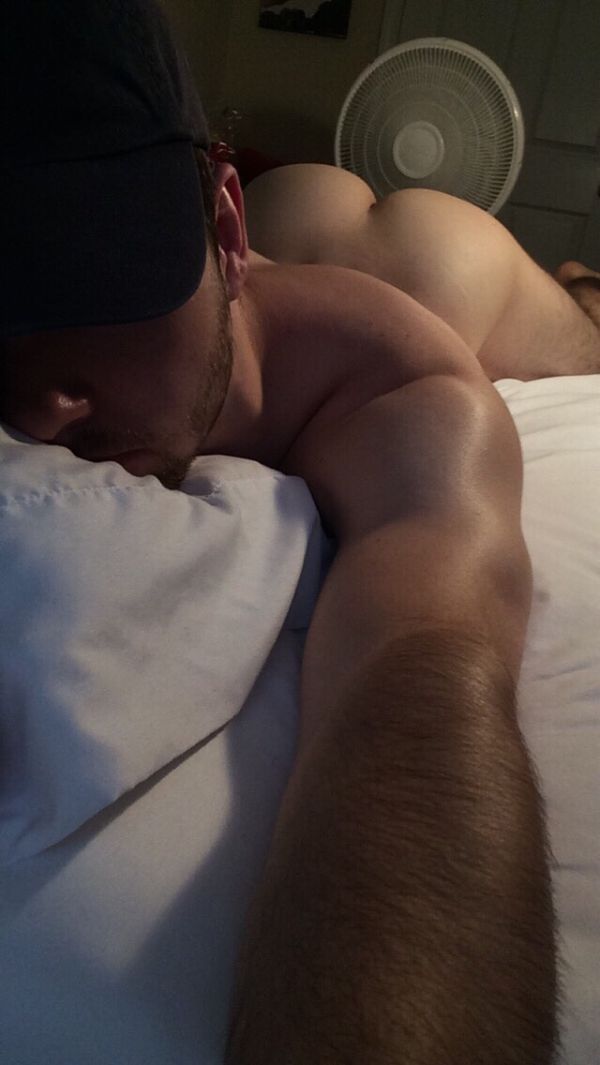 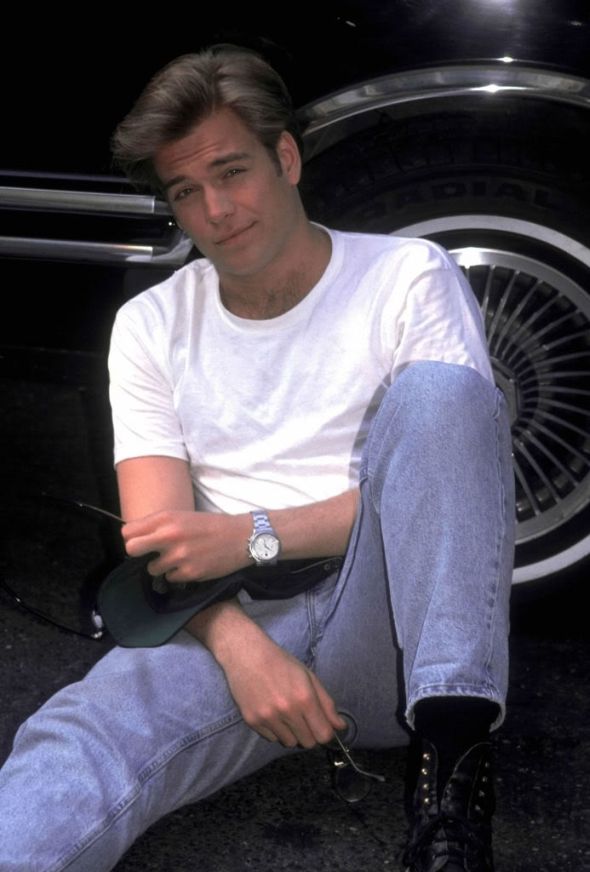 Ok Ok, I finally understand it, Michael Weatherly is HOT!  It is not that I didn't see an appeal, I always thought he was cute and likable, but I also always lumped Weatherly into a category.  You know that category, Richard Dean Anderson is there and Weatherly's co-star Mark Harmon,  It is a category of actors, hugely popular, especially with female viewers, but not seen as particularly sexual by men. 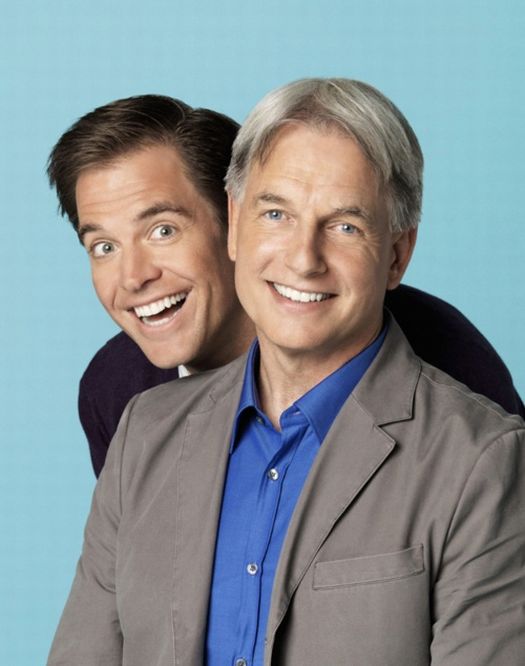 Maybe it's because they're nice, I hope not, all are good looking, but there is something about them that although I liked, I never really was drawn to.  That was, in Weatherly's case, until Easter weekend... 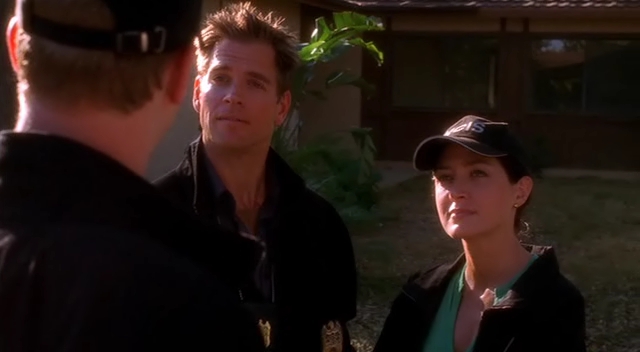 What happened on Easter, well it was the first time I have ever watched an episode of NCIS from start to finish.  I did not intend to, the show bores me silly, but I was visiting my parents, a home where NCIS and Matlock reruns are on a constant loop, and even though I didn't intend to, a 2004 episode of NCIS, The First Wives Club was on, and the volume was on high. 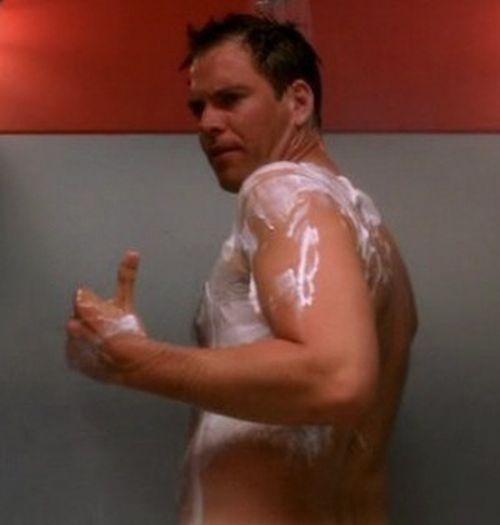 I got Weatherly's appeal, and I got it hard....  As I sat watching, I was fully at attention with how Weatherly seemed to literally light up every scene he was in.  With a twinkle in his eyes, and an incredibly sexy grin, he was flirtation in his exchanges, with almost every other character, both women and men. 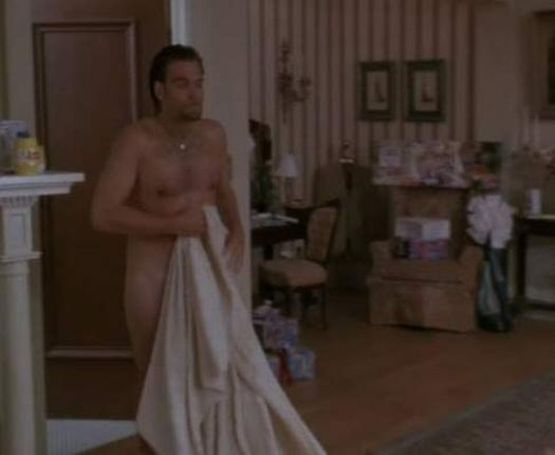 Weatherly's charm, and sex appeal, were on full display for the entire episode.  The actor is leaving NCIS at the end of this season, and although I may never watch another episode, glad I finally felt what all the fuss was about.  Maybe there's hope I might one day get the appeal of Tom Sellek.... nah 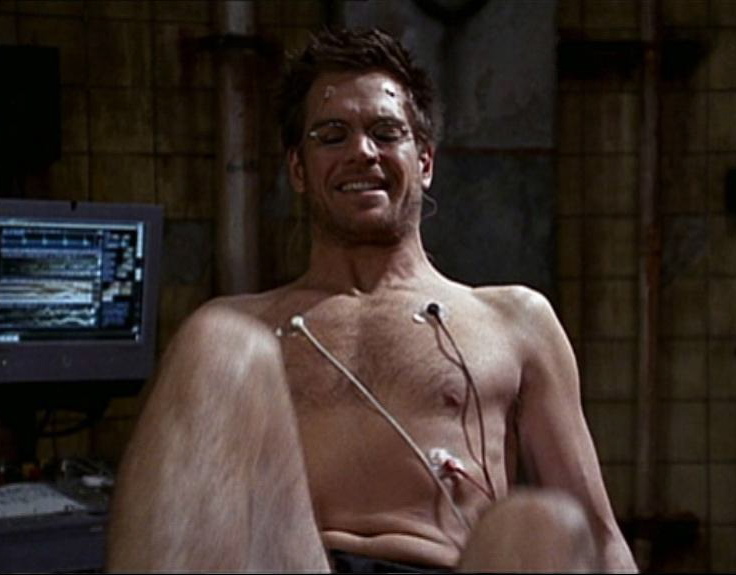 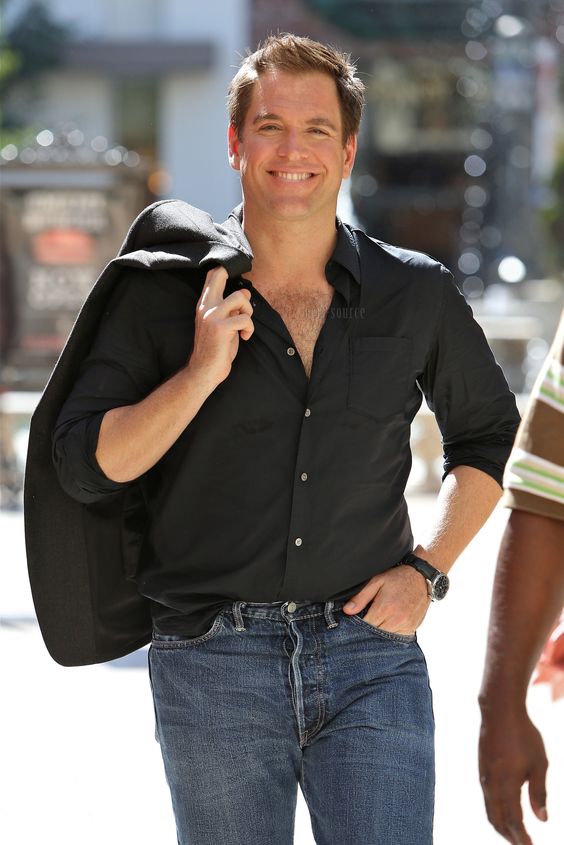 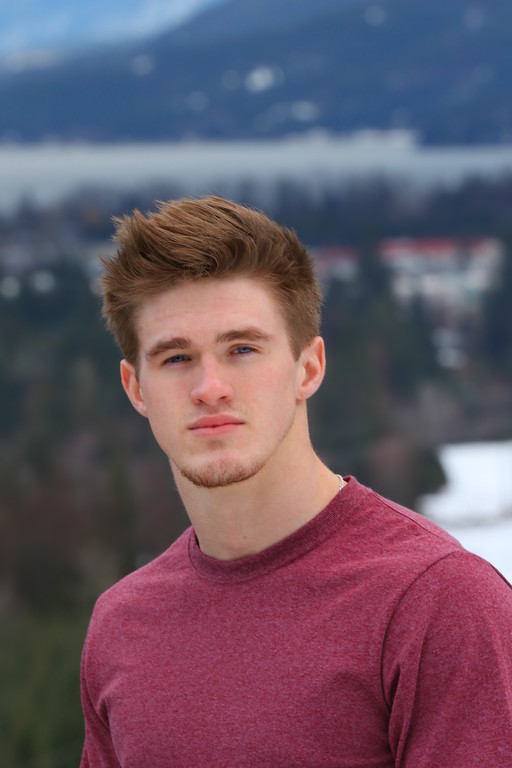 'It was hard to get him to keep his shirt on.'
Peter Rowen 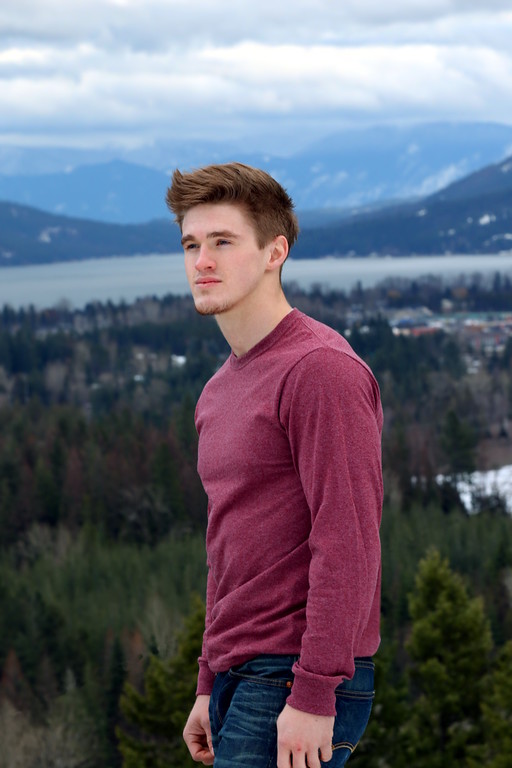 Initially, I thought I was clever by titling this piece, Shirtless in Seattle. Photographer Peter Rowen is from Seattle, and the last time I featured his imagery, Washington landscapes were a magnificent and important part of the images and shoot. My little pun using the movie title however, ended up not fitting. Digging a little deeper, I discovered that although Peter's subject is still surrounded by mountains, tree's and blue sky's, this time the location was not Seattle, but the beautiful city of Sandpoint Idaho. 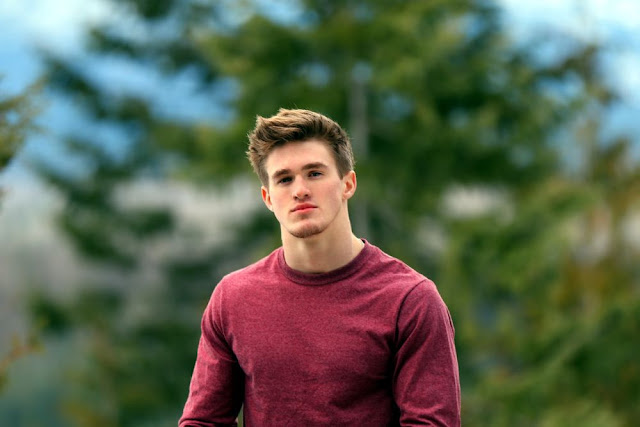 Despite the incredible beauty around him, in this set of images, my eyes were firmly drawn to Brent, the model in focus and in center of all of the Sandpoint beauty that surrounds him.  I absolutely loved Peter's images of Brent the second I saw them  Although many photographers head into the mountains and woods to shoot, Peter's imagery uniquely blends the male form and the majestic beauty of the Pacific Northwest. 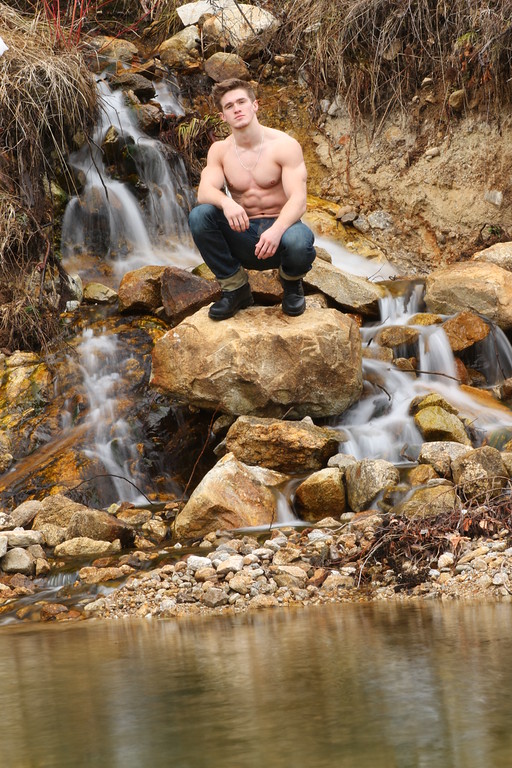 I think majestic beauty is also a great description of Brent.  His incredible body aside, I love Brent's overall look and especially his gorgeous face.  I love Brent's sexy chin, and his beautiful eyes, which have an alluring, yet kind and calm feel.  I love the wonderful contrast with Brent's gentle facial presentation and the strength and power of his impressive physique. 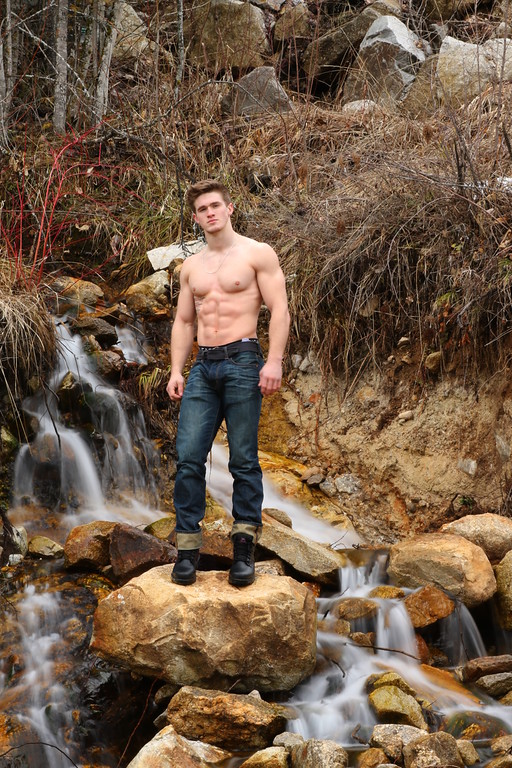 Peter describes Brent as a go-getter who was eager to shoot after Peter tracked him down.  Peter usually shoots his Nature series in the spring and summer, but these images came from a test shoot they did in Idaho this past February.  Although it was pretty cold, Peter describes Brent as enthusiastic to get some great shots and despite the frigid temperatures says,  'He was very game, though, and it was actually harder to get him to keep his shirt on. 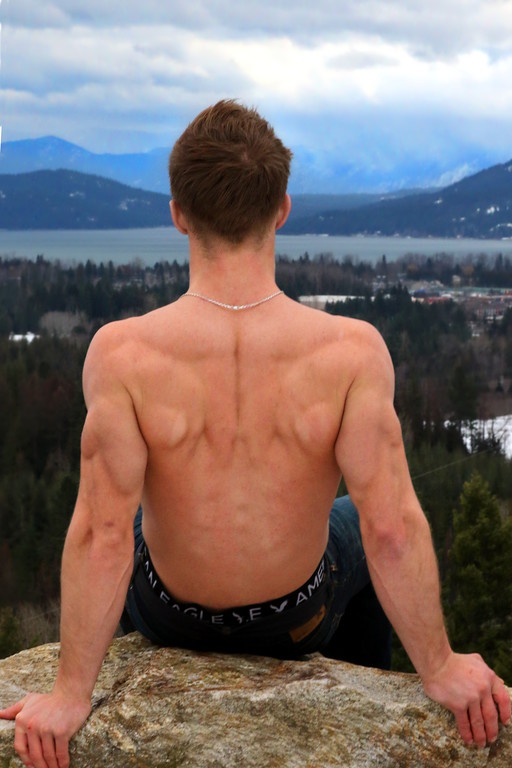 'Instead of marketing himself as a model, he'd rather just lift heavy things.' 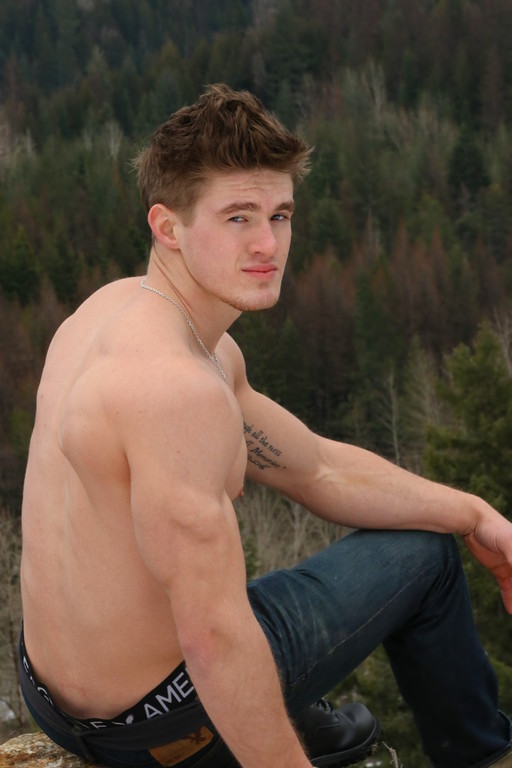 That's not to say Brent isn't motivated, his hope is to one day is be on the cover of Men's Heath and turn all of his hard work in the gym into success.  It is just that for now, Brent's focus is on his body, and building and maintaining his current look.  Clearly, this goal has been successfully achieved! 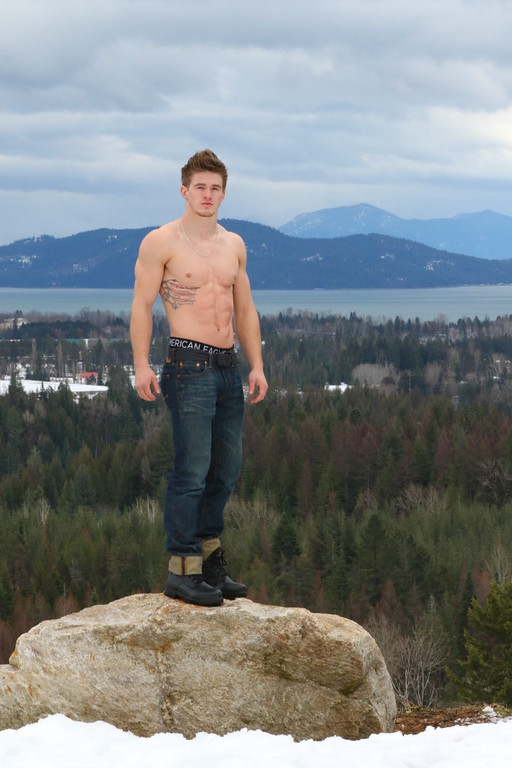 Although Peter described this shoot as a 'test shoot', I thought the results were spectacular, and with Sandpoint as a backdrop, and Peter's skill behind the camera, the resulting images provide a perfect visual scrapbook of Brent's fitness achievements. Photographer and model are planning on getting together again in June for a hike, and shoot up the Selkirks mountinas and I look forward to the spectacular images which I am sure will follow. 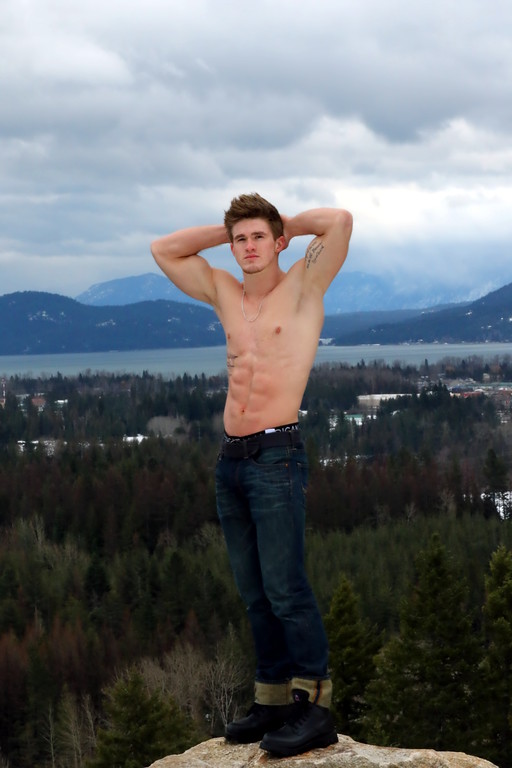 The quote on Brent's bicep is from a letter from his father, who passed away a few years ago. 'Through all the mess there are still memories.' 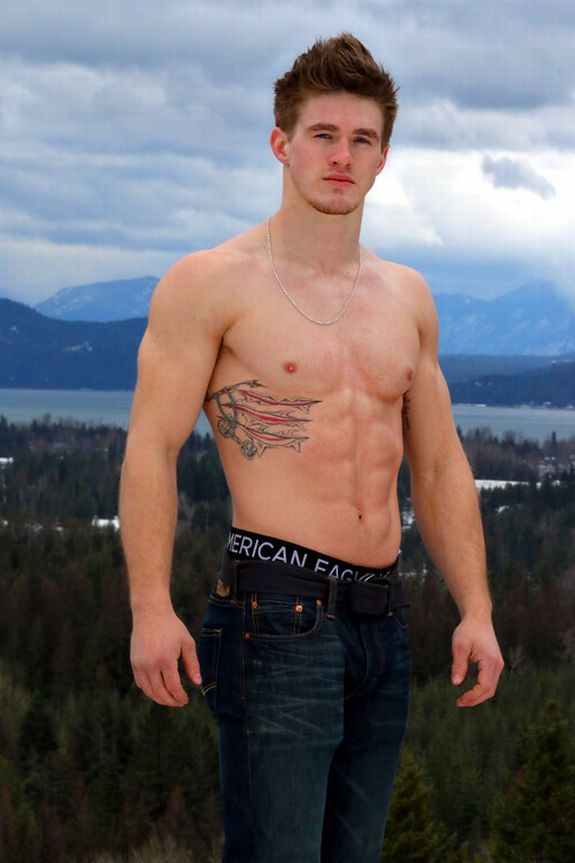 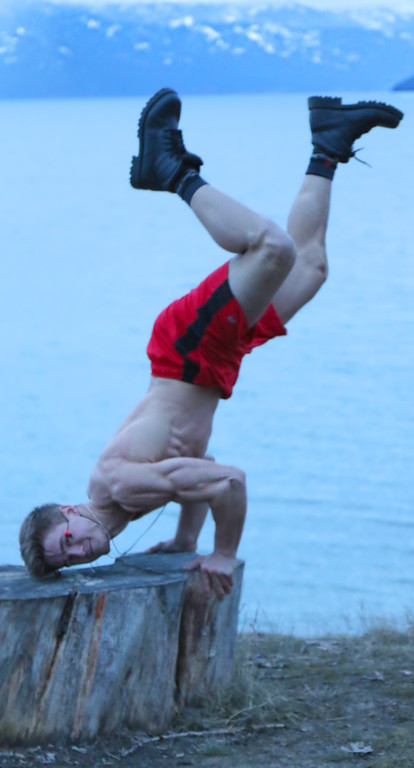 'For the pics running along the lake, Brent realized he'd left his athletic shoes at the gym, but we really wanted those shots of muscle in motion. In the end, we just decided that the boots would be one of those quirky charming things people will comment about. I think it worked.' 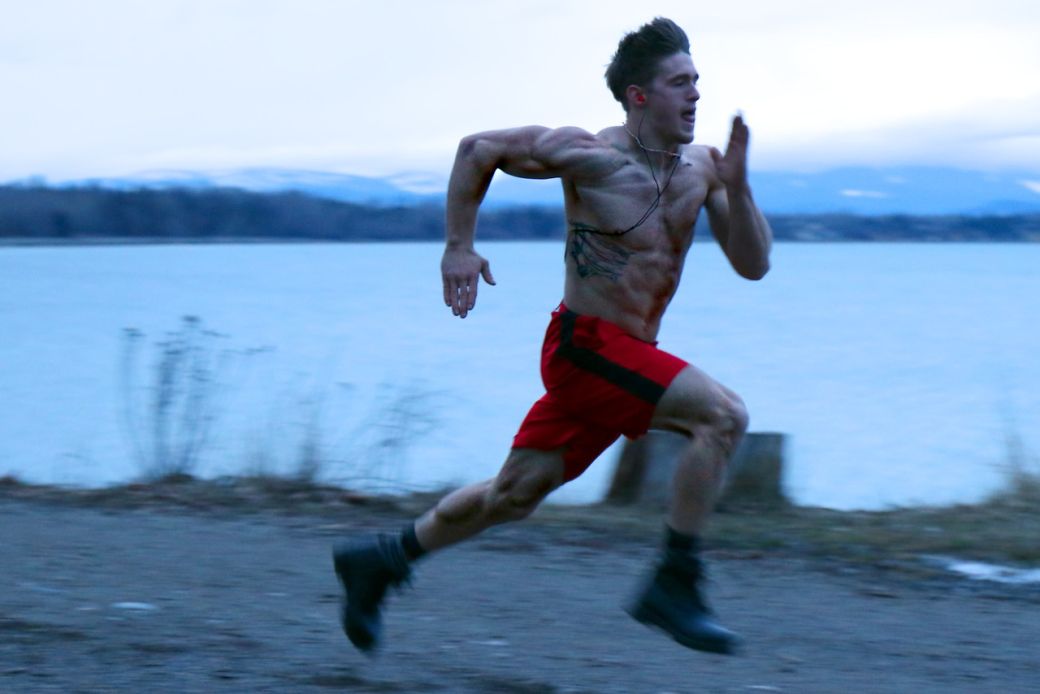 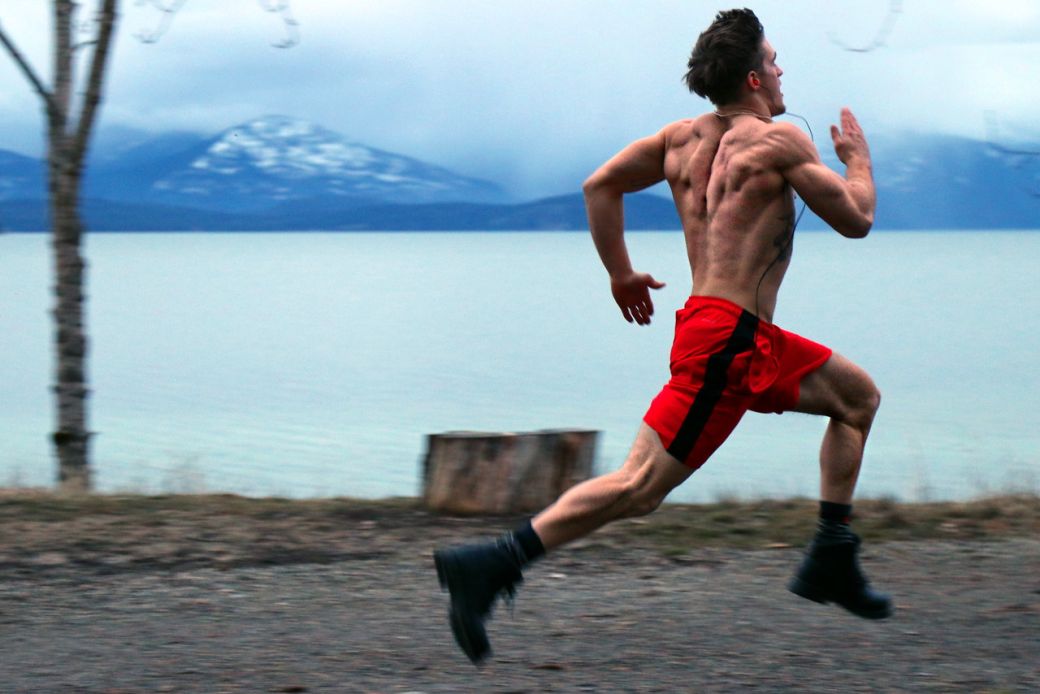 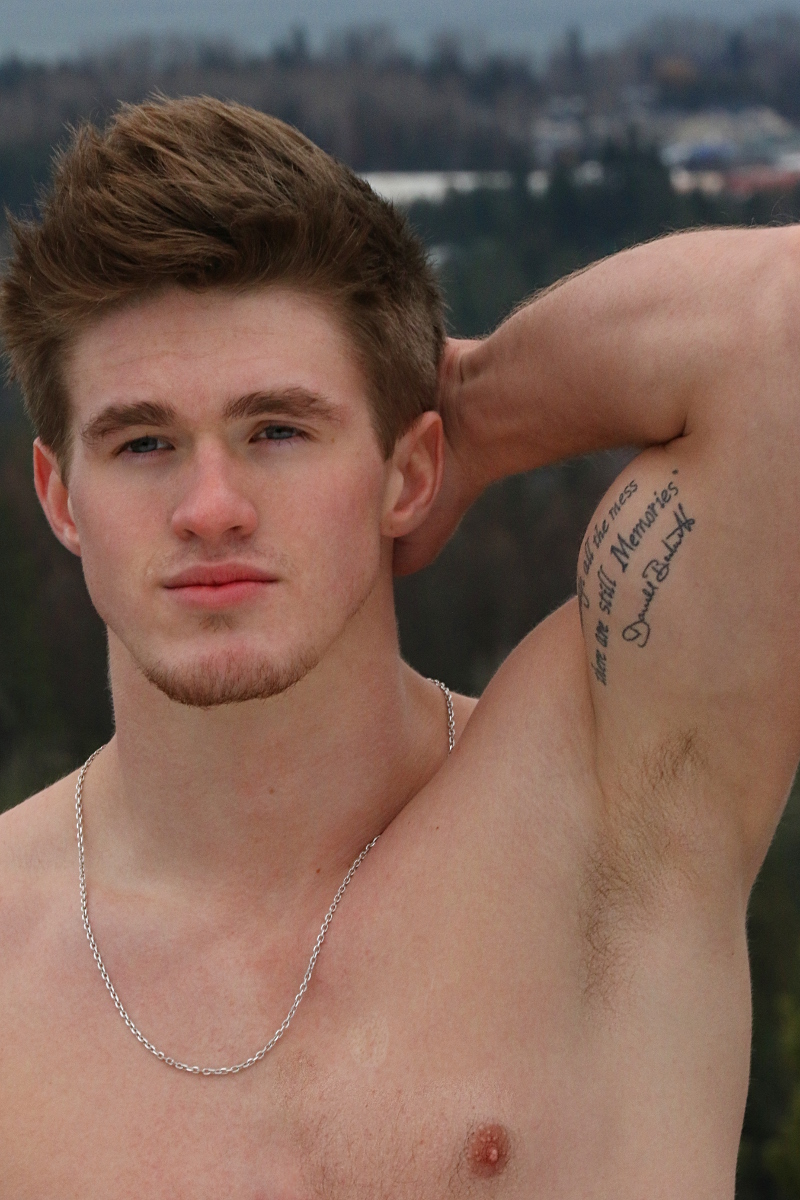