Favorite Pic of the Day for February 20th 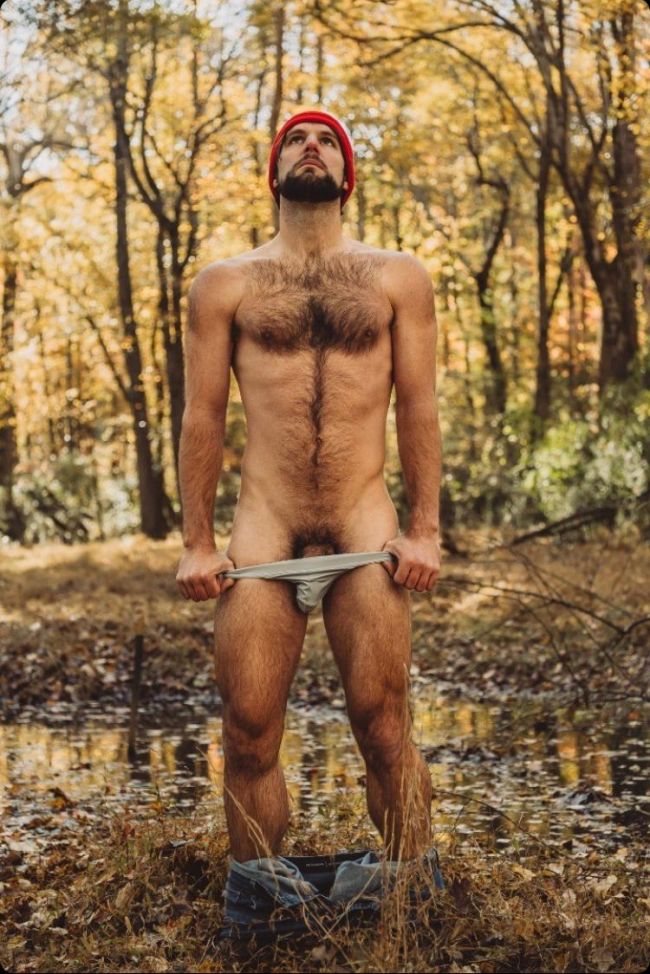 Above:
Nico by Creative Portraitures
-See More Below-
~Check out today's BIRTHDAYS HERE:~
at February 19, 2022 No comments: 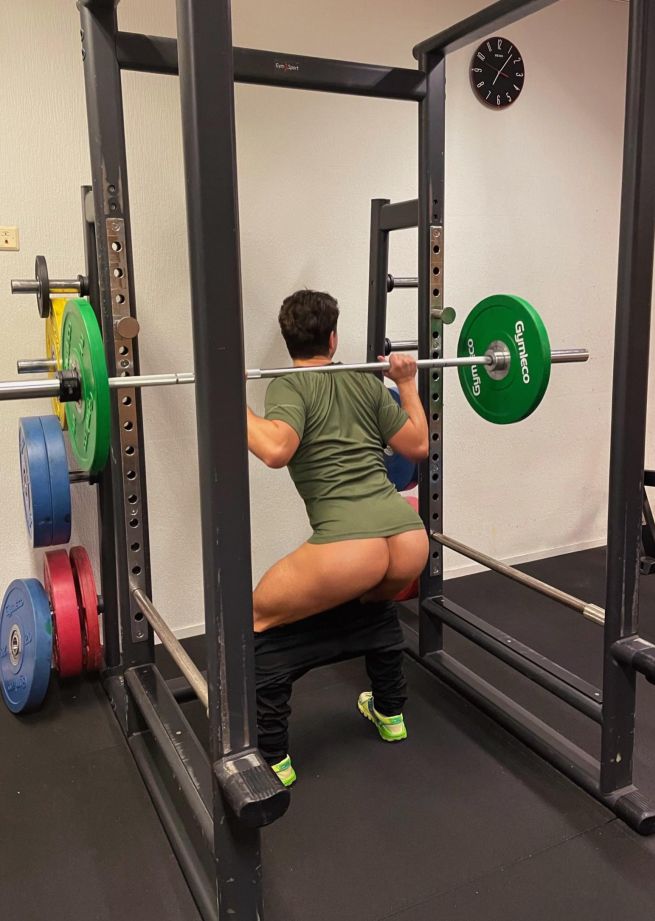 Under the Ski Suit 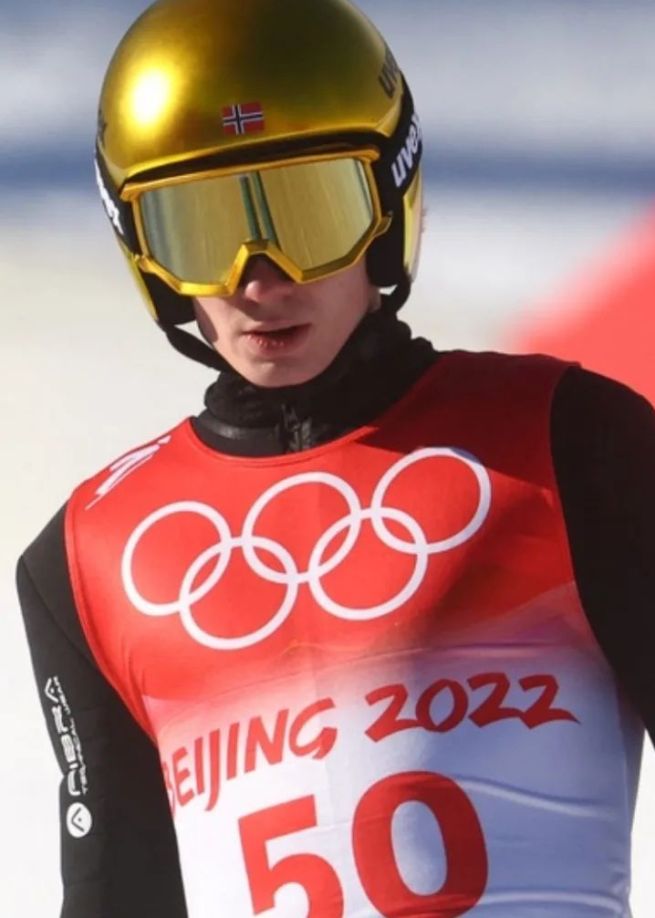 Earlier this month, Norwegian ski jumper Halvor Egner Granerud participated in the men's normal hill individual in Beijing.  Although he didn't medal, Havor, already has a slew of awards and medals under the belt of his tight fitting ski suit.  Speaking of tight fitting suits, Havor took his off for a nude jump which I previously featured on the site.  If you missed it, or want to watch the video again, check it out on the NEXT PAGE HERE: 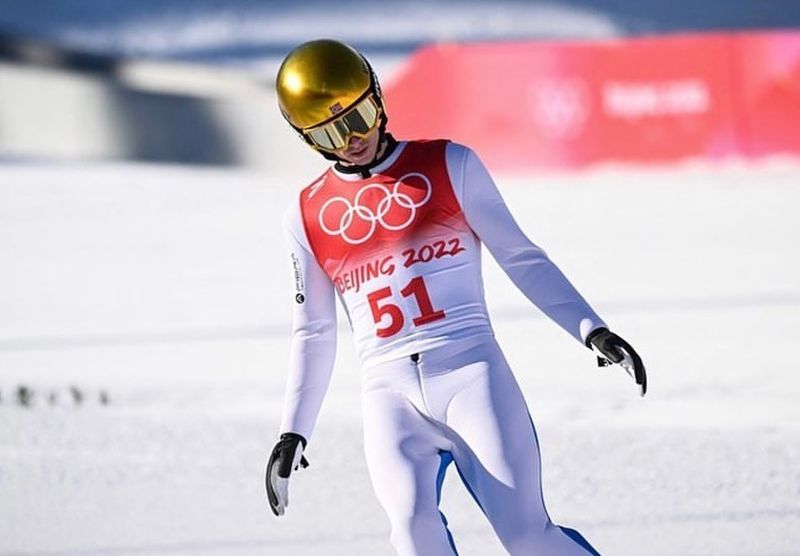 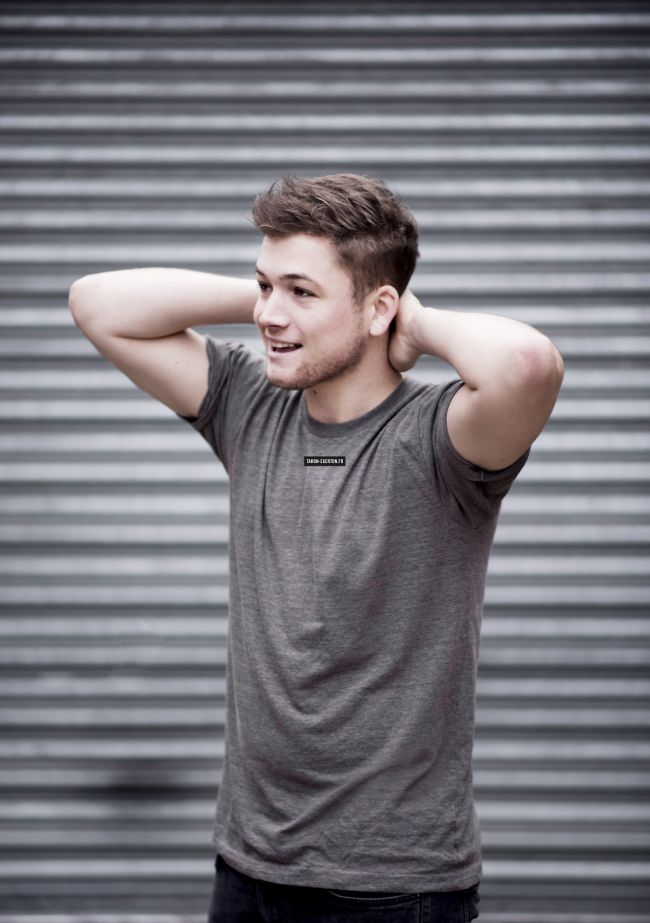 It's always interesting what exactly sparks my attraction to a model or celebrity.  More often than not, it goes beyond just their physical appearance.  I thought actor Taron Egerton was great in Rocketman, but to be honest, I didn't love the film.  It was good, and the music was great, but it just didn't leave an impactful or lasting impression. 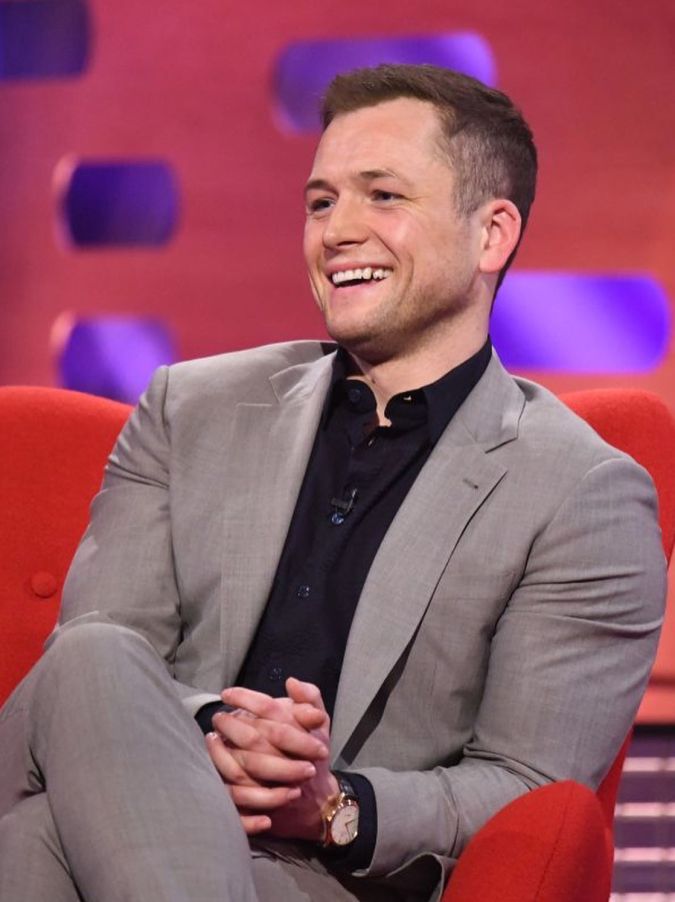 Egerton did however, leave a lasting impression on me after his recent appearance on The Graham Norton Show.  I love Norton's talk show and catch it often when it airs on my BBC cable channel.  Egerton was recently on, and just seeing, and hearing him talk, had me wanting to see, and hear more. 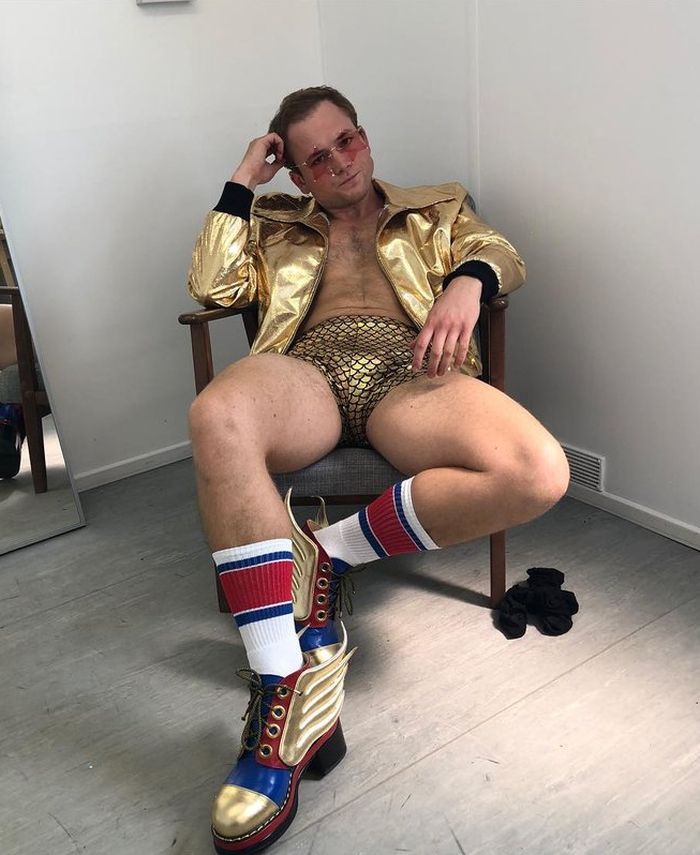 Egerton's Welsh accent is incredibly sexy, and I loved hearing him swap Elton John stores with actress Courtney Cox.  It was also pretty hot hearing Egerton discuss his turn in the play 'Cock', premiering next month at the Ambassadors Theatre in London.  Egerton and Jonathan Bailey, (Bridgerton) play a gay couple when one of them has an affair with a woman when they're 'on a break'.  Wish I was going to be in London to see it!

My new attraction had me searching for more of Egerton's work, and it took me back to 2014 and his appearance in the one and only season of the soapy drama 'The Smoke'.  Check out Egerton's shower scene from the TV series on the NEXT PAGE HERE:
Cock 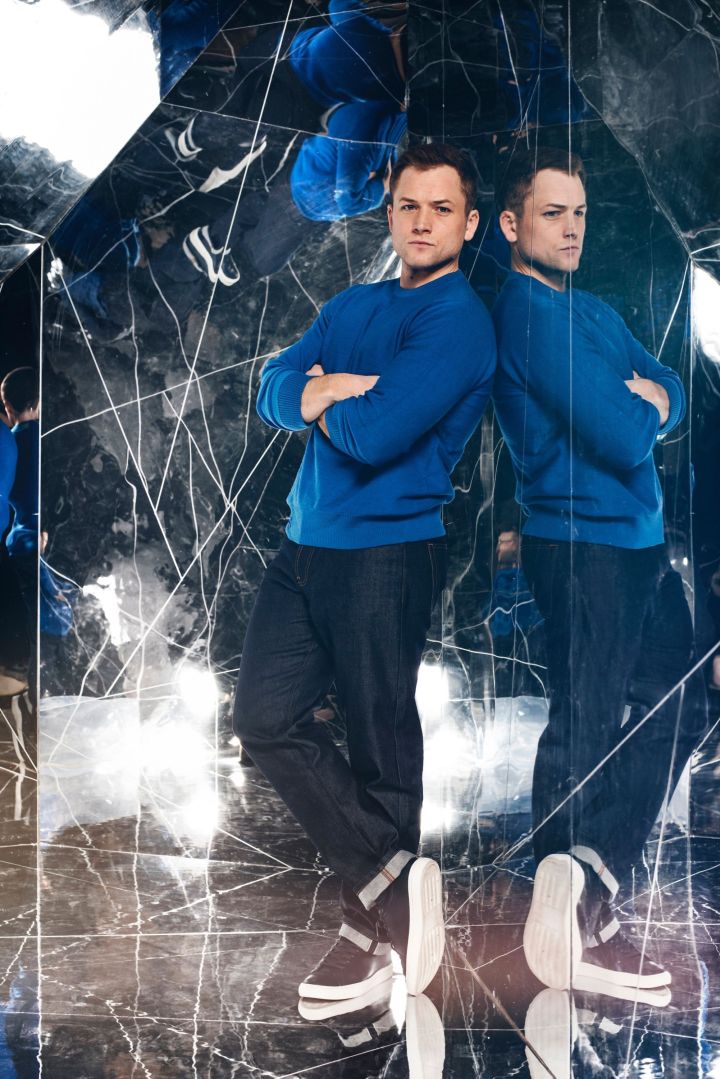 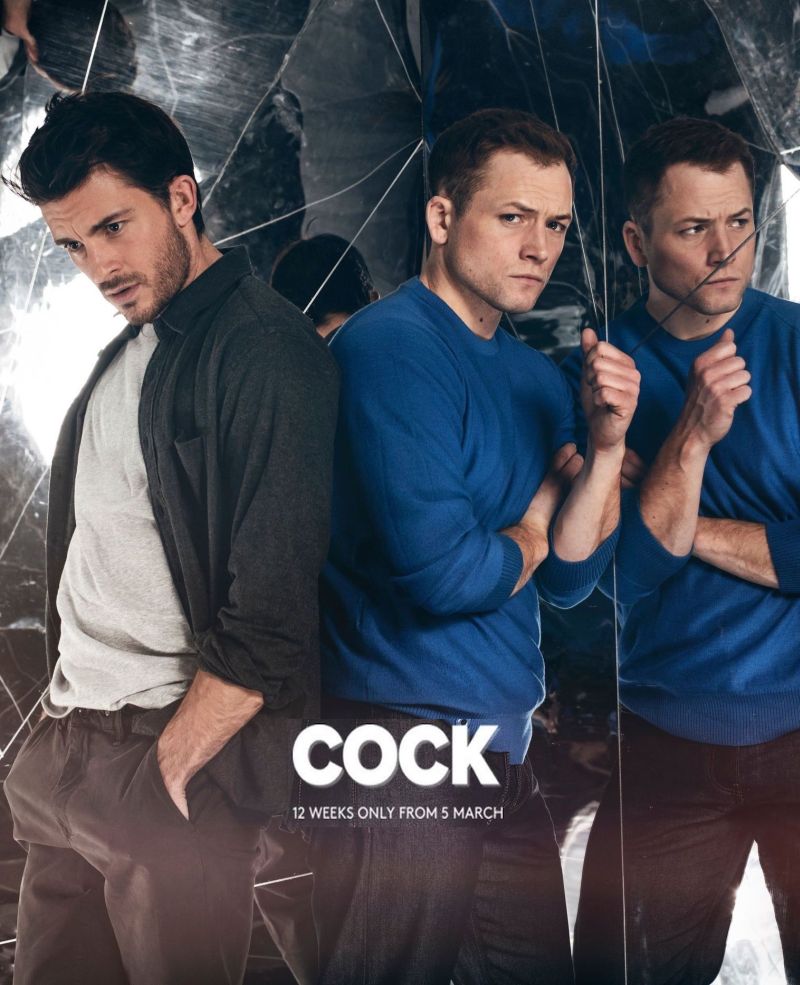 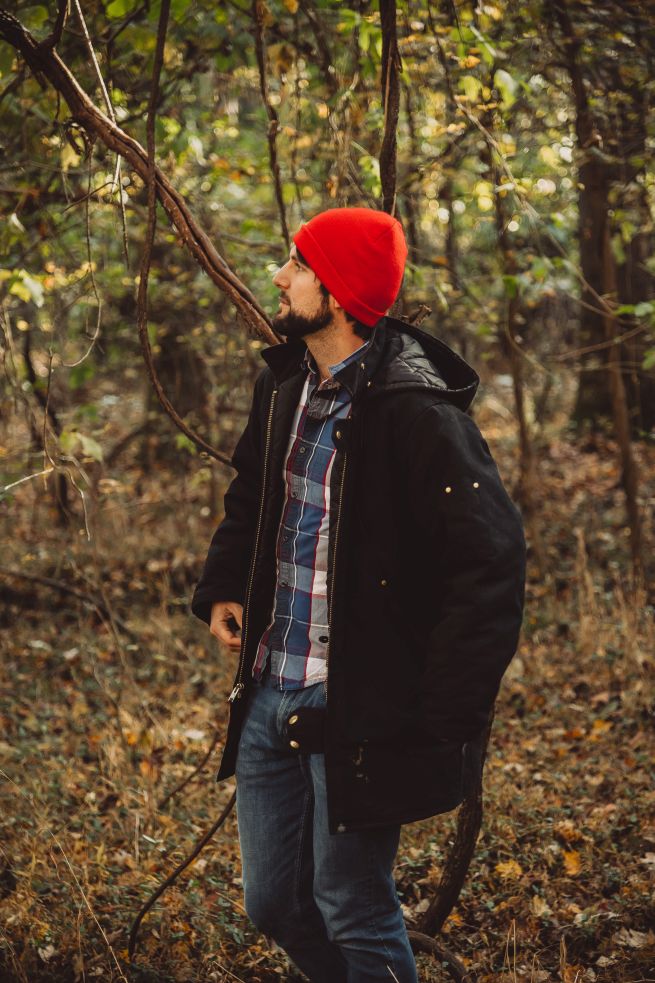 'My bare body exposed for only the trees to see.'
Nico 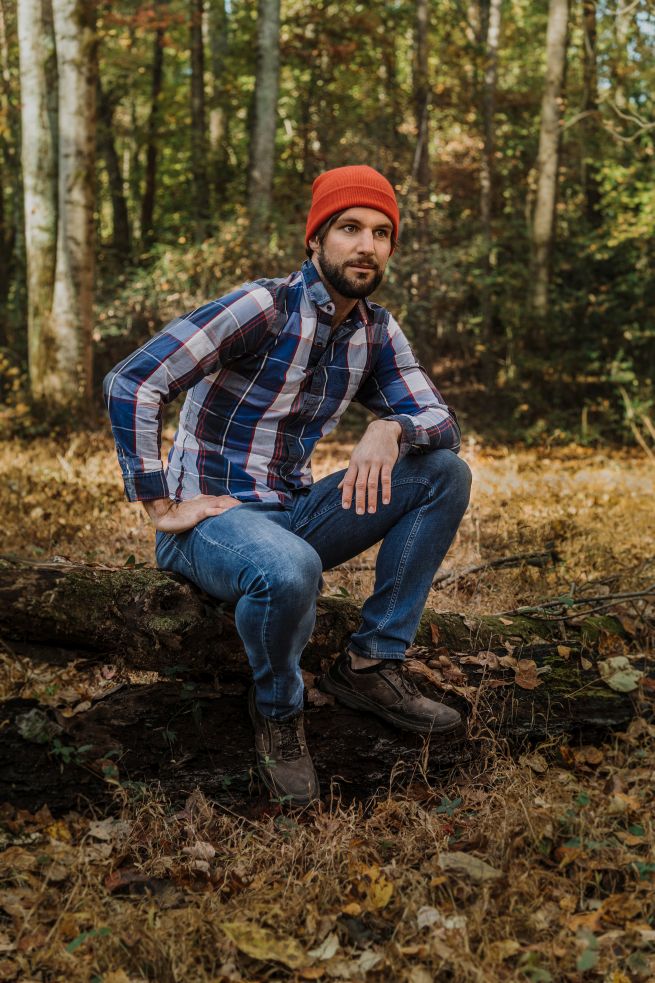 FH viewers are aware of my passion for seasonal visuals.  As wonderful as some of the images can be, I love images of hot male models on sandy beaches but I equally love seeing the male form surrounded by  orange and red leaves the fall, red, yellow and blue flowers in the spring and fields of white snow in the winter. 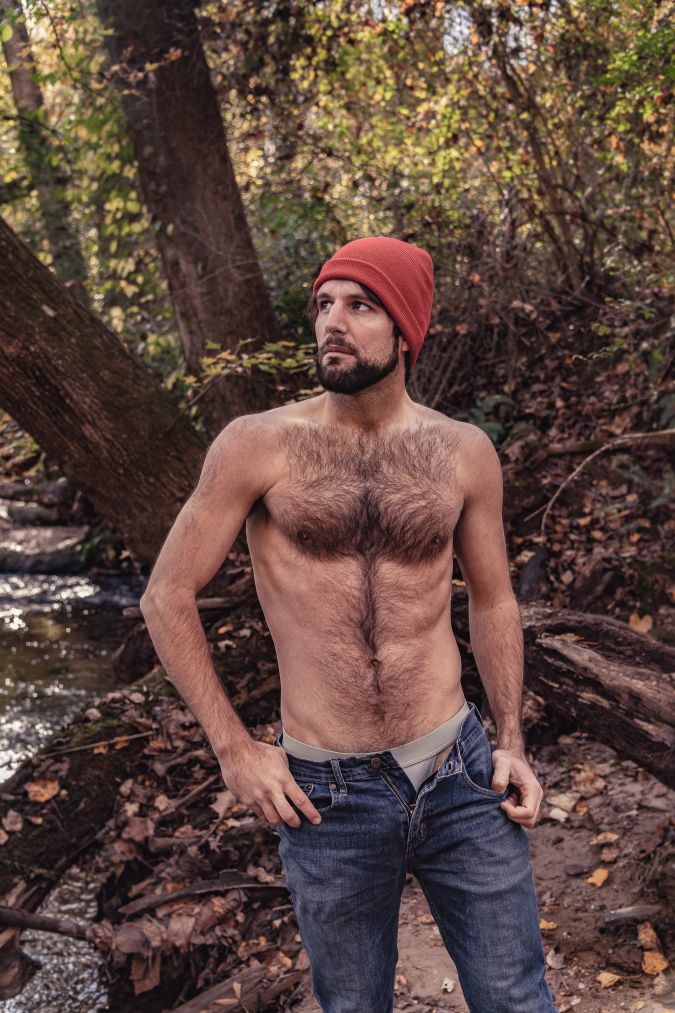 One of the things I enjoy most about seasonal imagery is the way the model interacts with their surroundings.  Part of the attraction of location shoots is seeing how the model and photographer connect with the location.  You can see and sense the connection through their poses and how they touch and react to what's around.  You can see a photographers connection through the locations they choose and how they incorporate specific elements of the location into their imagery. 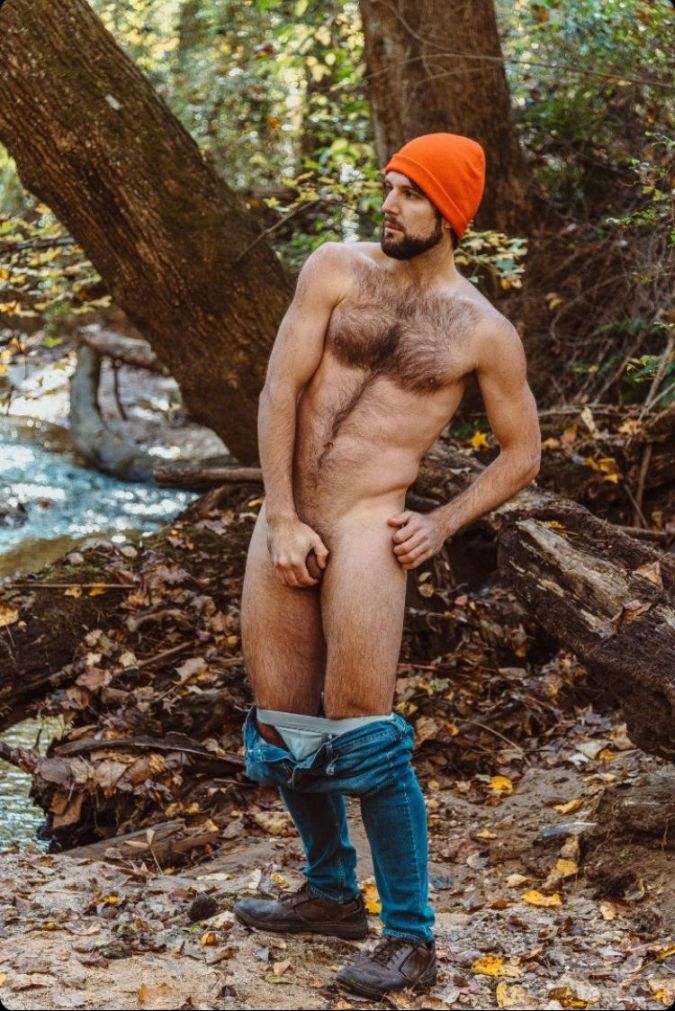 When that connection is made, it's clear to the viewer.  It's almost if the model belongs there, and is not just dropping by for a shoot.  They appear natural in their surroundings, their not just posing in front of something, but becoming a part of it, even if only for moment.  They reflect what's around them, mirroring the feel, temperature and texture of their surroundings 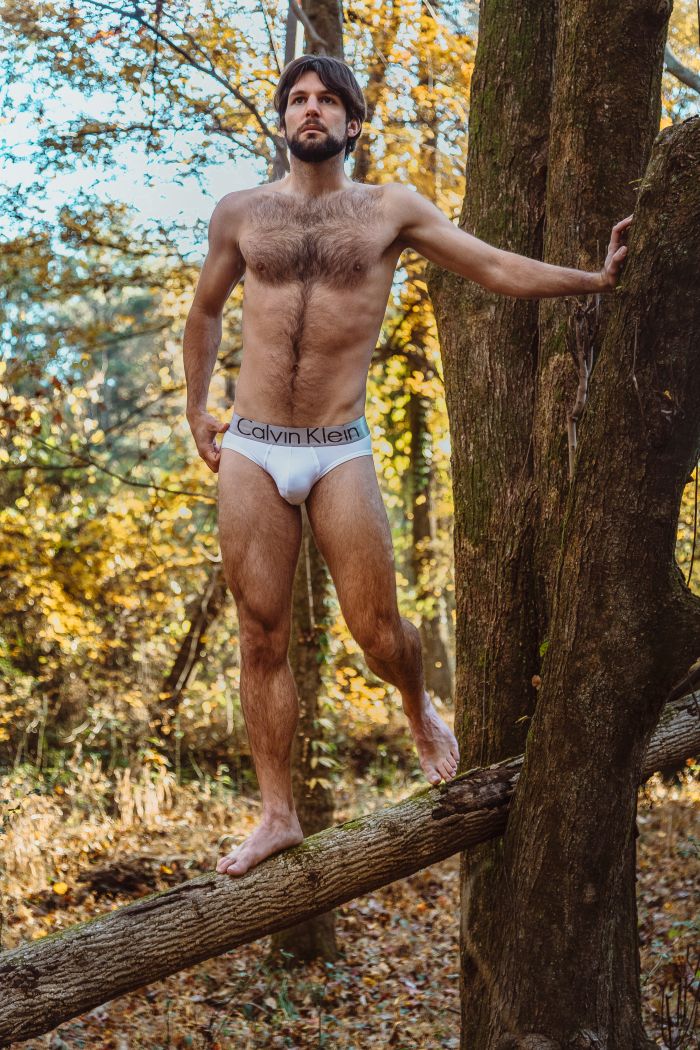 When I first saw these shots of Nico (Calves Of Adonis) by Creative Portraitures, I sensed this connection immediately. Nico didn't look like he was 'just' posing in the woods, his scruffy sexy look mirrored the rugged forest around him.  It wasn't a surprise then to learn that rugged was the look Nico and Creative Portraitures were aiming for. 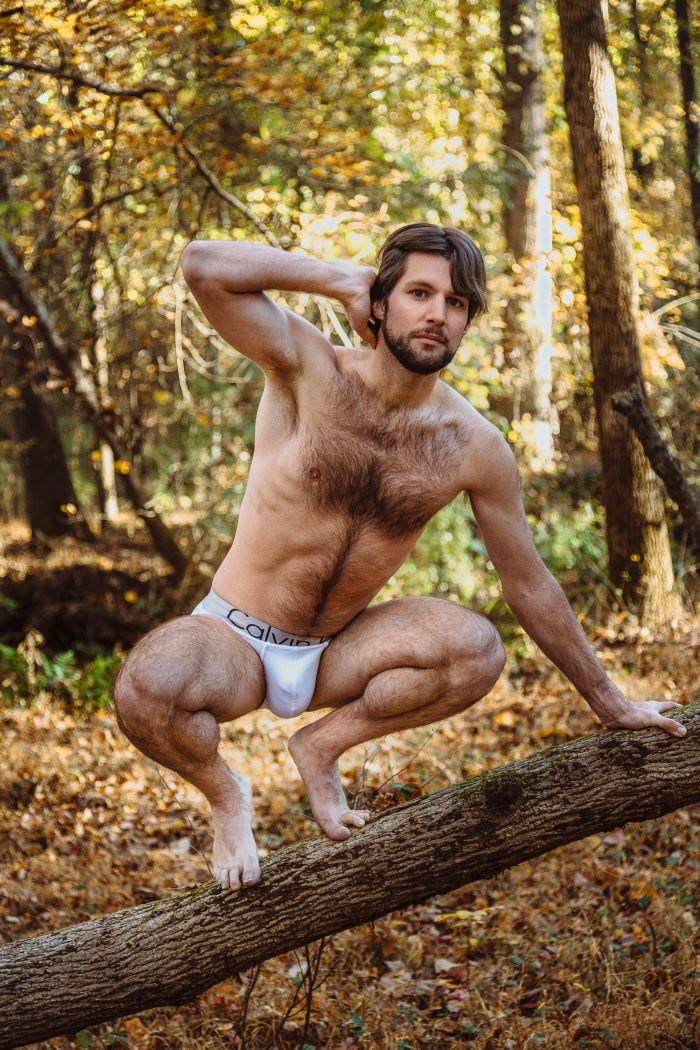 We were aiming for a rugged look, some plaid and jeans, and jockstrap. I loved the results and we ended up getting some tasteful and partial nudes that came out strikingly well. 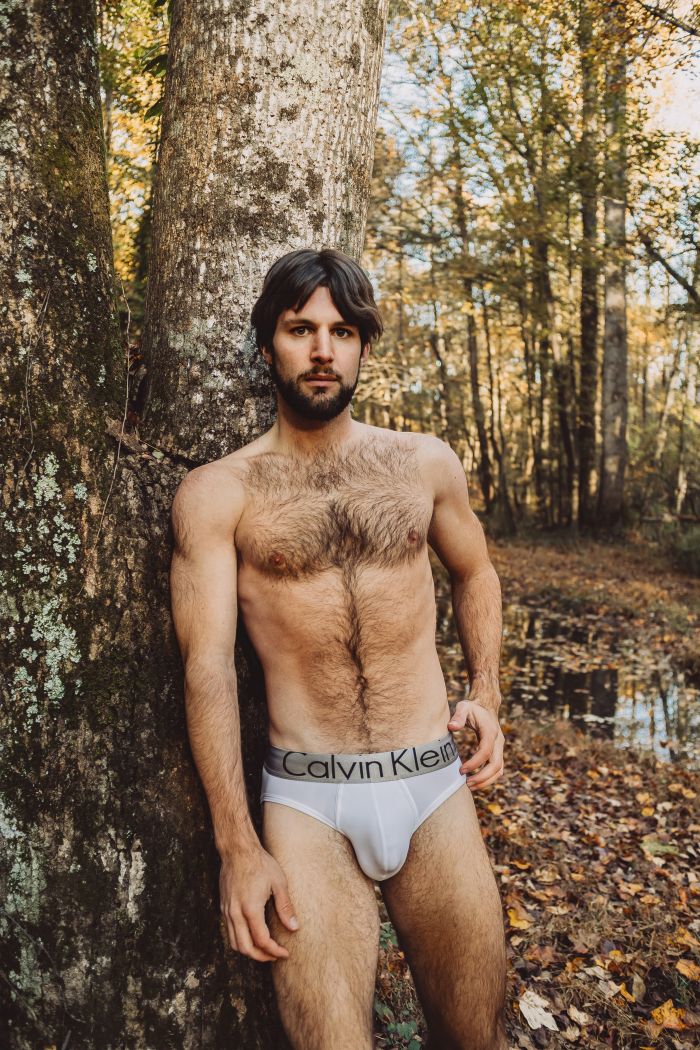 Many of you may remember Nicol from his previous appearance on the site.  I first featured Nicol's work in 2020 in a piece spotlighting his work with Unlimited Male. (Distinct Encounters)  Last year, I was lucky to be able to feature two of Nico's shoots.  A series of images from Gordon Nebeker, (Creative Coupling) and another series from Unlimited Male for Halloween. (HERE:)  As hot as Nico was in the first two features,  he definitely cranked up the sexy and smouldering switch with his longer hair and beard in the Halloween shoot. 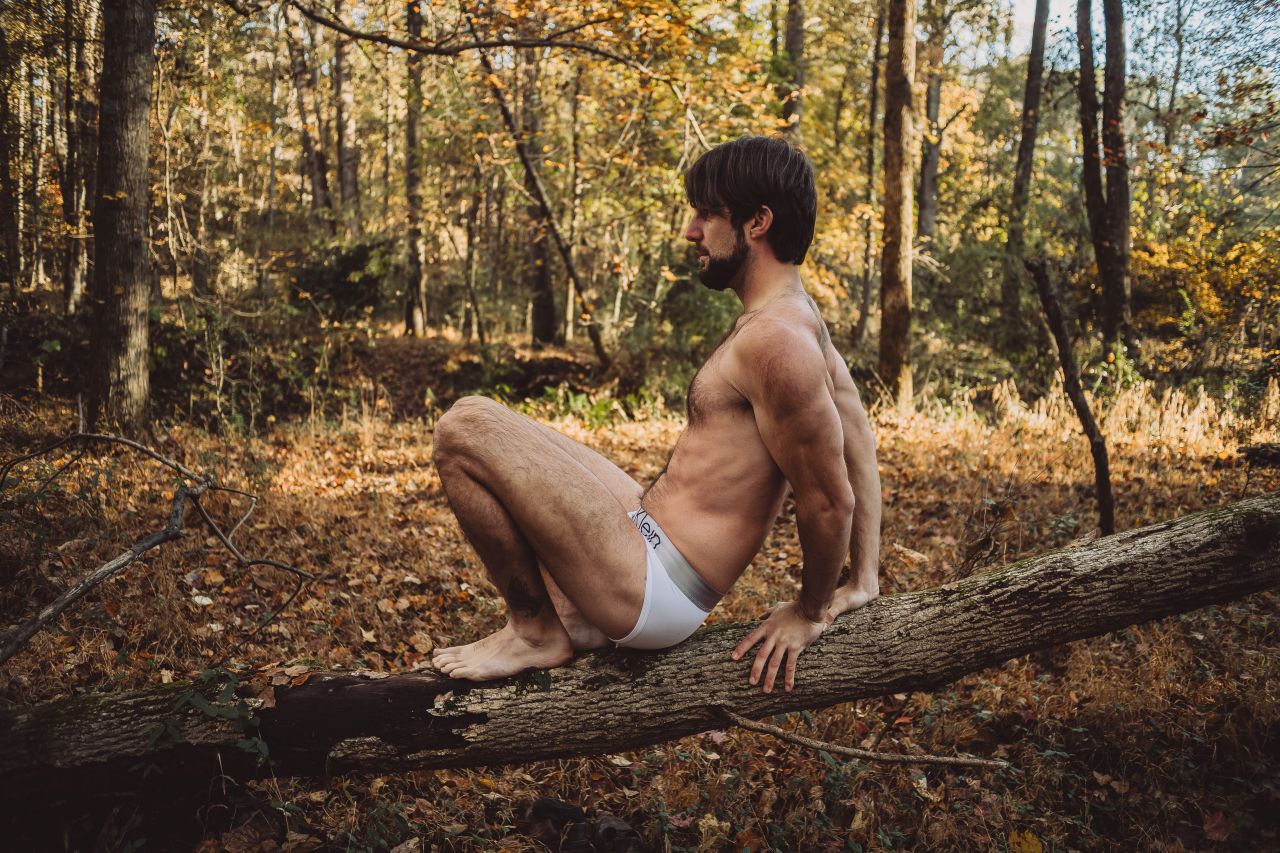 'My favorite part of the shoot was the shots of me on the fallen tree. I had a fun time balancing and getting into interesting positions. The fun part was also getting down. It wasn't too difficult, but bare feet on a wooden log... you never know. ' 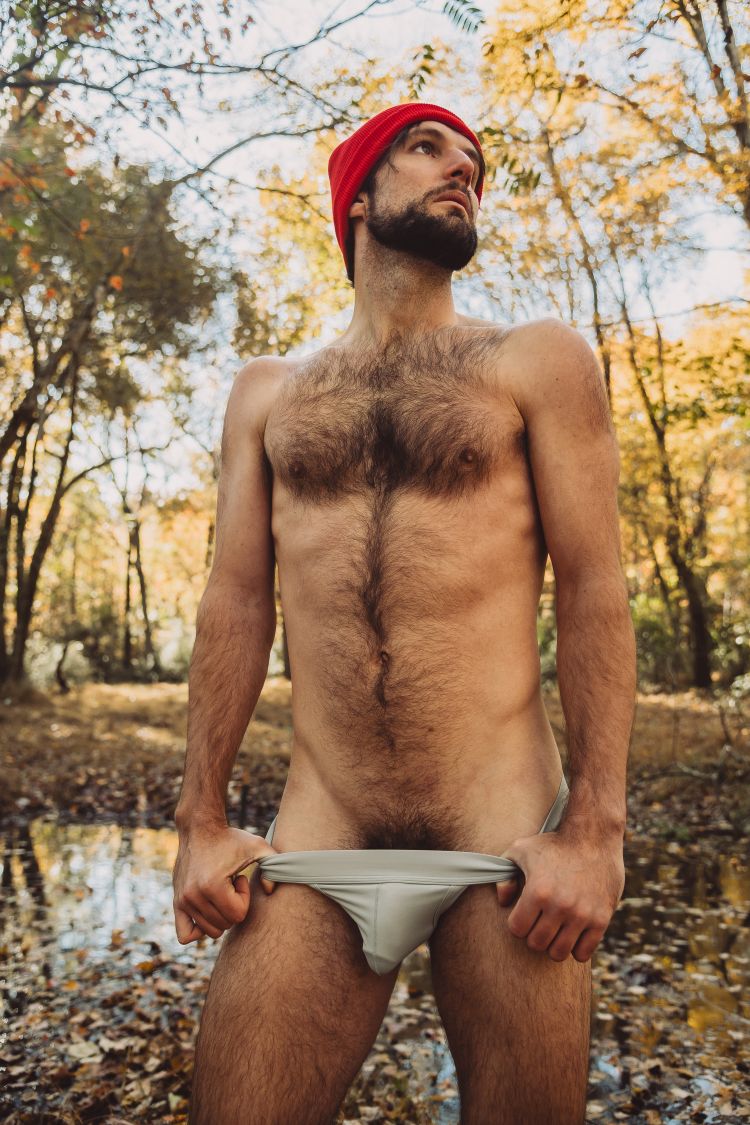 Creative Portraitures took notice of Nico's look as well and contacted him on Instagram after seeing his portfolio on Model Mayhem.  They discussed themes and styles and the possibility of a future shoot. They originally discussed shooting inside but Nico had an idea for an outdoor location that he used in the past.  They scheduled a shoot for late last year in a wooded area near Mauldin, South Carolina. 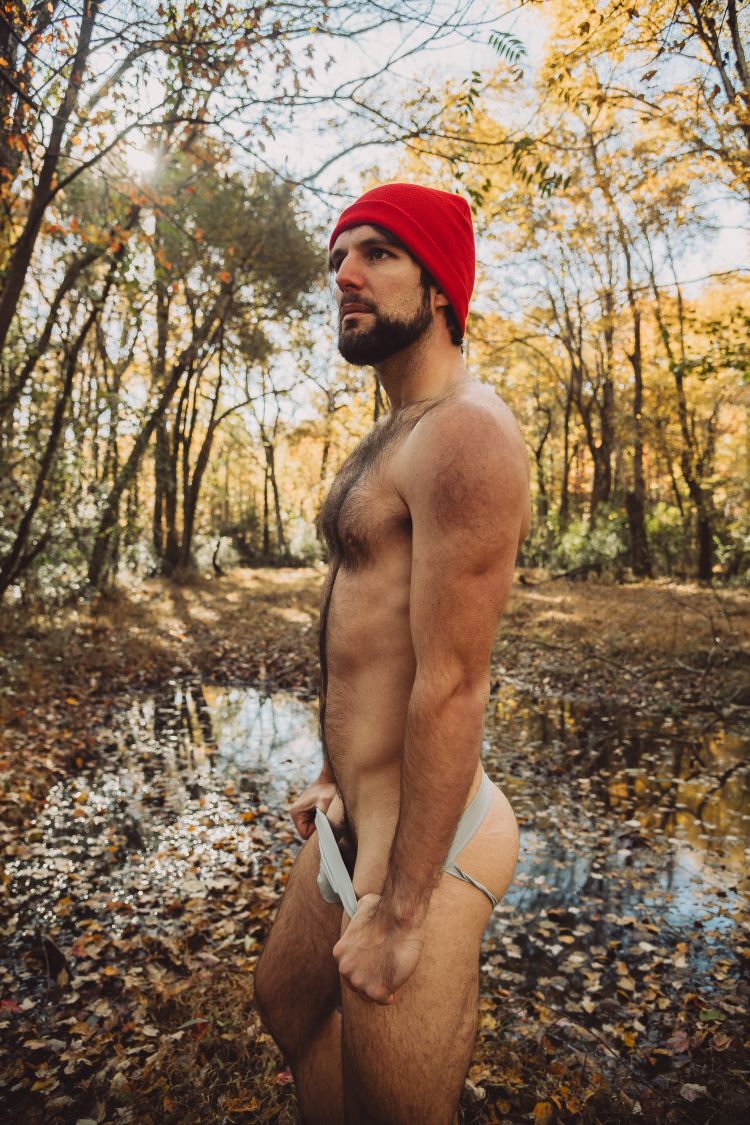 'The section of trees we were in was in a secluded area. There weren't any passersby as it was not a hiking trail. It was a nice wooded area with access to a small creek bed. We started the shoot at about 9:00am and the sun was just making it's way about a quarter of the way into the sky. It was about 34 degrees and in the shade of the trees. It definitely didn't feel warm. I kept jumping in and out of my big Alaskan winter coat as the lenses were changed and adjustments were made for the movement of the sun in the sky. ' 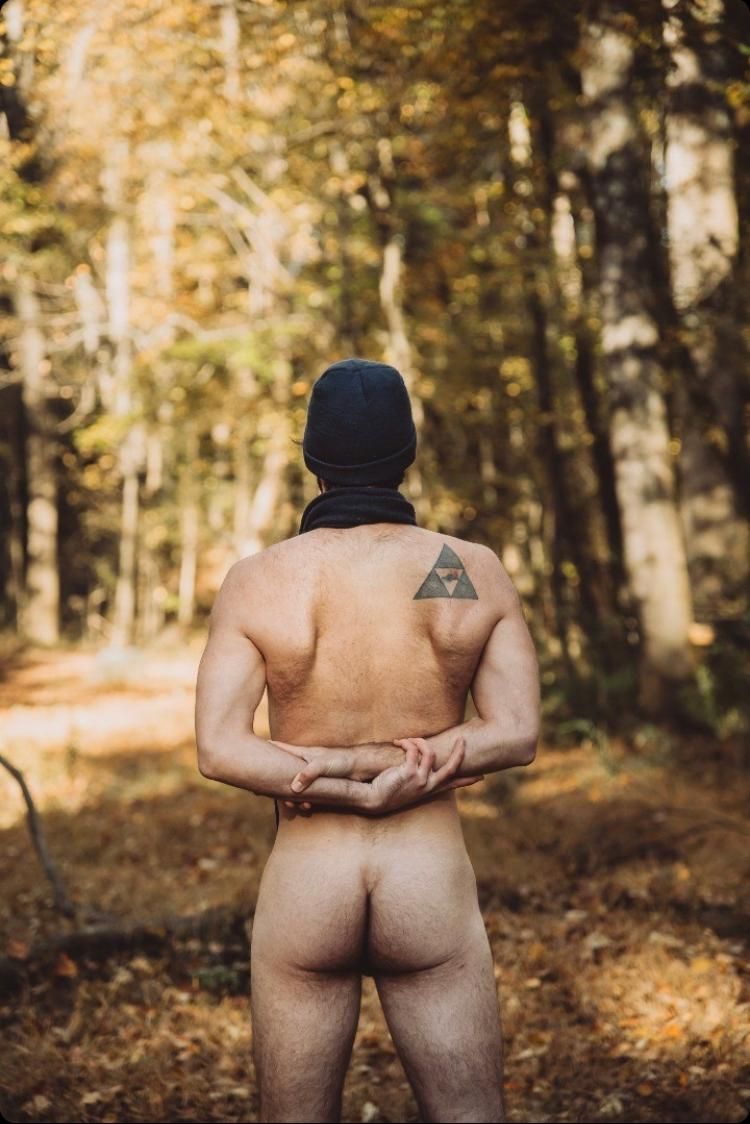 Nico enjoyed in the shoot and collaborating with Creative Portraitures.  He specially love the photographers communication style. Nico loves to get feedback during a shoot;  hearing what's going well, and what's not so that he can fix it, or change what he's doing.  In addition to direction and feedback, Nico also loves the independence to try new things and push his creative boundaries during a shoot.  Creative Portraitures was open to Nico's ideas and suggestions and they worked together to create the incredible results you see in this series of images. 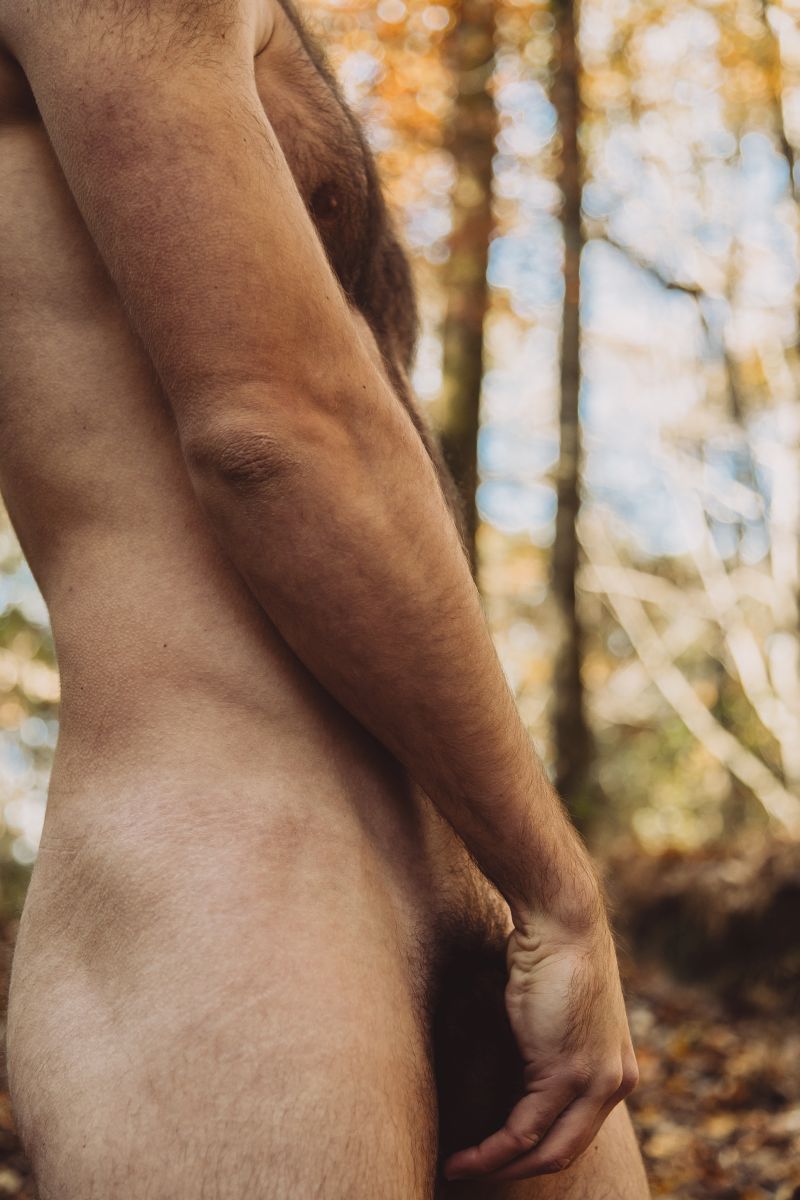 'My favorite image is the one where I am completely free (save for my cap) to stretch and be one with the nature around me. You wouldn't know it but I was practically shivering by the end of this shoot and this image was one of the last we had taken.
I look so at peace, so alive, and yet so calm. That image captures in me how I feel on warm days hiking in the woods, and we were able to capture it in almost freezing weather, with my bare body exposed for only the trees to see.' 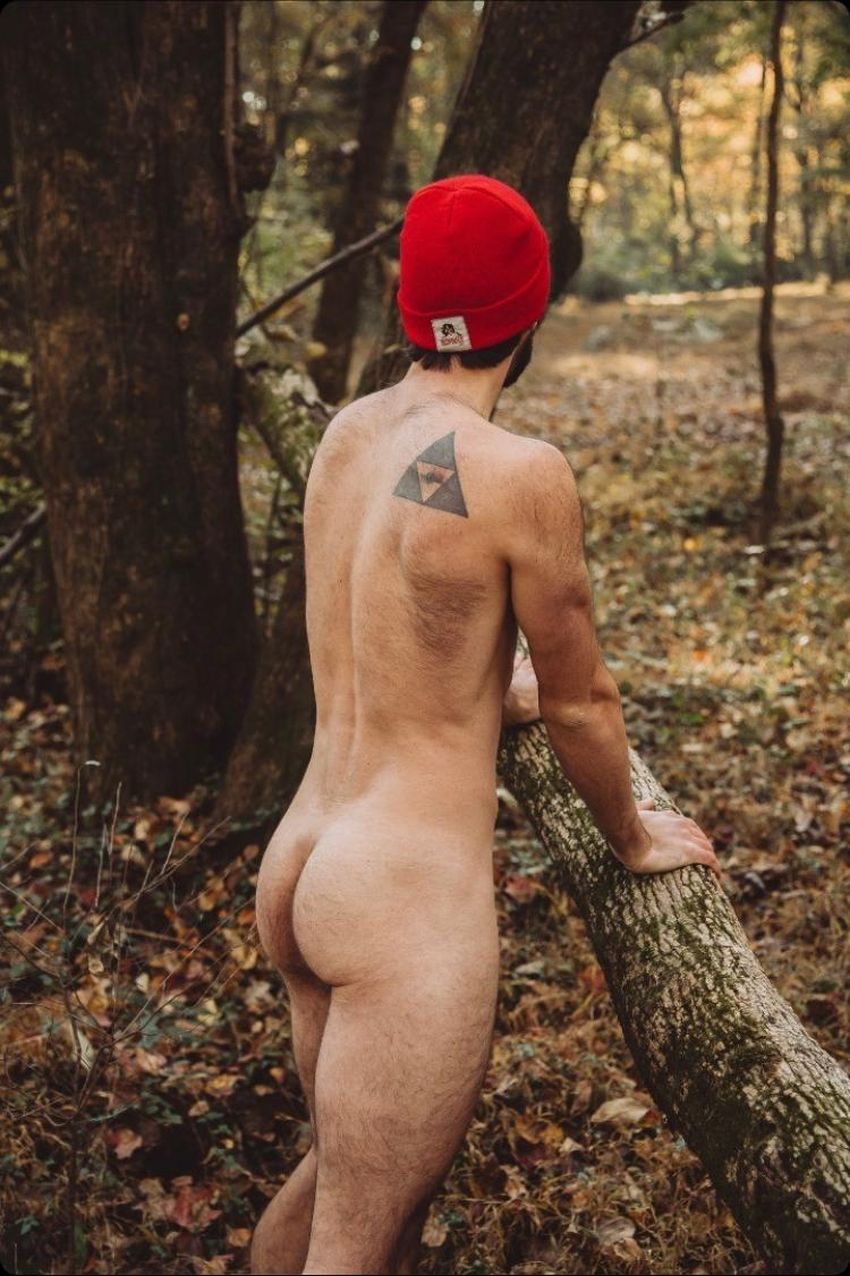 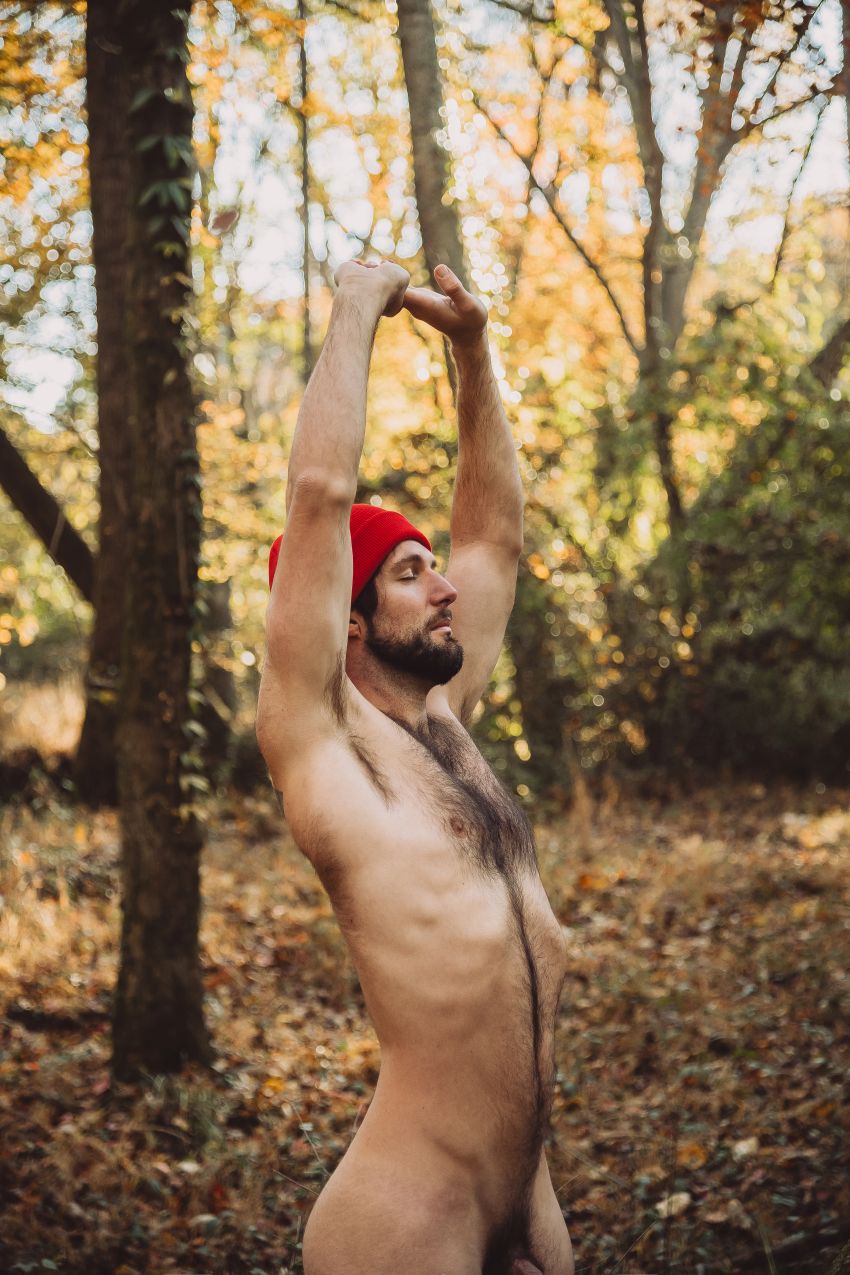