Favorite Pic of the Day for September 9th 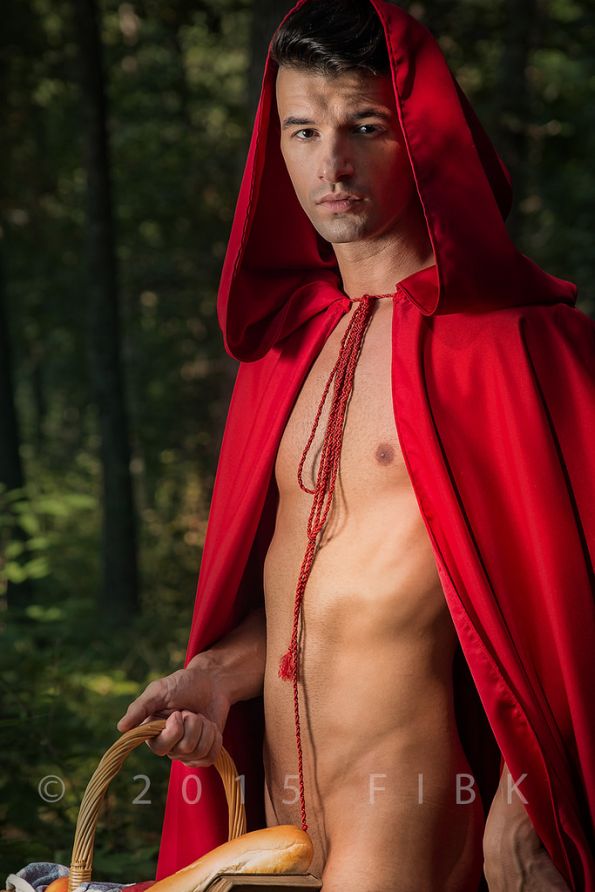 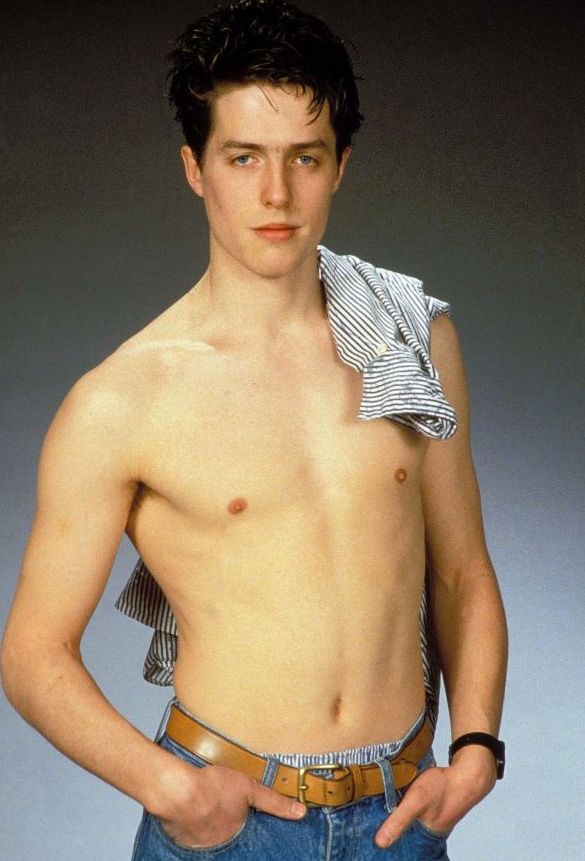 Happy 55th to actor Hugh Grant!
Some days, nothing is better than old romantic comedy featuring Hugh.
Check out more of today's birthday HERE:
HERE: & HERE:
at September 08, 2015 No comments: 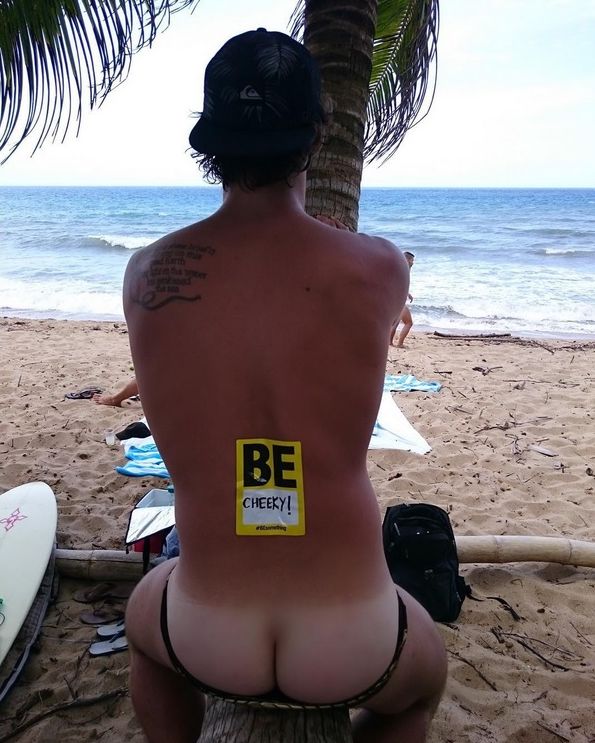 Be Cheeky!
I introduced FH to Alex at the beginning of the month. (Motion Sensor) If that piece didn't have you 'following' Alex on Instagram, maybe this recent image he posted might!
at September 08, 2015 1 comment:

Email ThisBlogThis!Share to TwitterShare to FacebookShare to Pinterest
Labels: Instagrams That Inspire, The Boob Tube 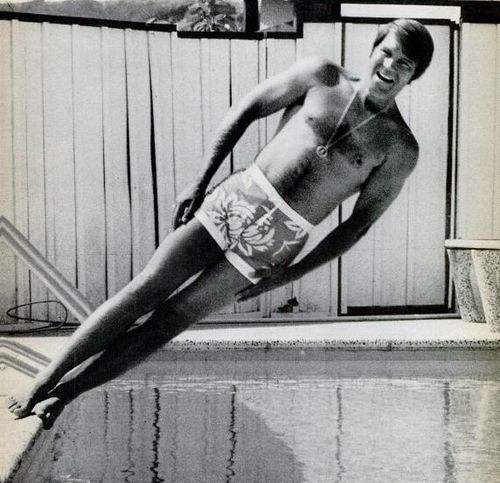 When I was growing up, my Dad loved to play his Glen Campbell cassette, over and over on road trips. I went from loving, to hating and loving again, By the time I get to Phoenix, Wichita Lineman, Rhinestone Cowboy and one of my favorites, Southern Nights. I DVR'd I'll Be Me, the Campbell documentary that aired on CNN earlier in the summer. I loved hearing those songs again but in addition to the resilient and inspirational feel to parts of the film, there was also something a bit disturbing.

I wasn't especially bothered by Campbell's family choosing to do one last tour. It seemed almost therapeutic, and Campbell seemed stubbornly in his element. But.. as the film went on, it became harder and harder to watch Campbell struggling both on and off stage. In a way, this is of course what all people suffering from Alzheimer's go through, but not all do it on a stage in front of hundreds of people. Seeing the family sing together, even as the disease progressed I am sure was a bonding experience, but it just felt most of the reason the tour continued (maybe longer than it should have) was about meeting the families needs over the singer himself. I of course have no idea what Campbell would have wanted, I just know that as a viewer, the film become more and more uncomfortable to watch as it went along. On the plus side, it did have me heading to Amazon to purchase 2 CD copies of The Best Of Glen Campbell, one for my father, and one for me. 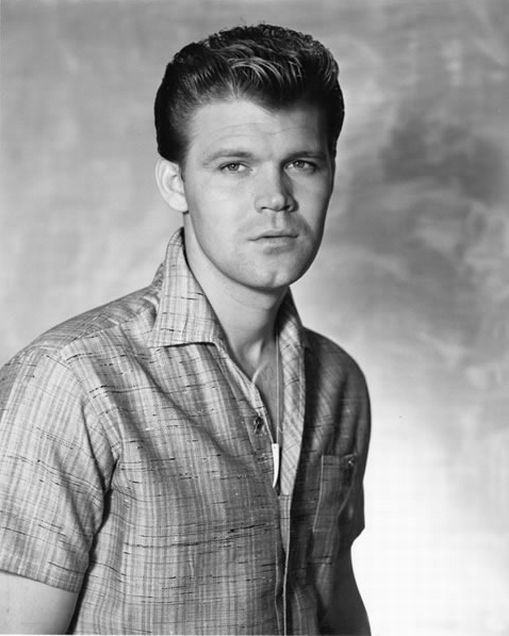 All the Better to Eat You With: Ua by FIBK 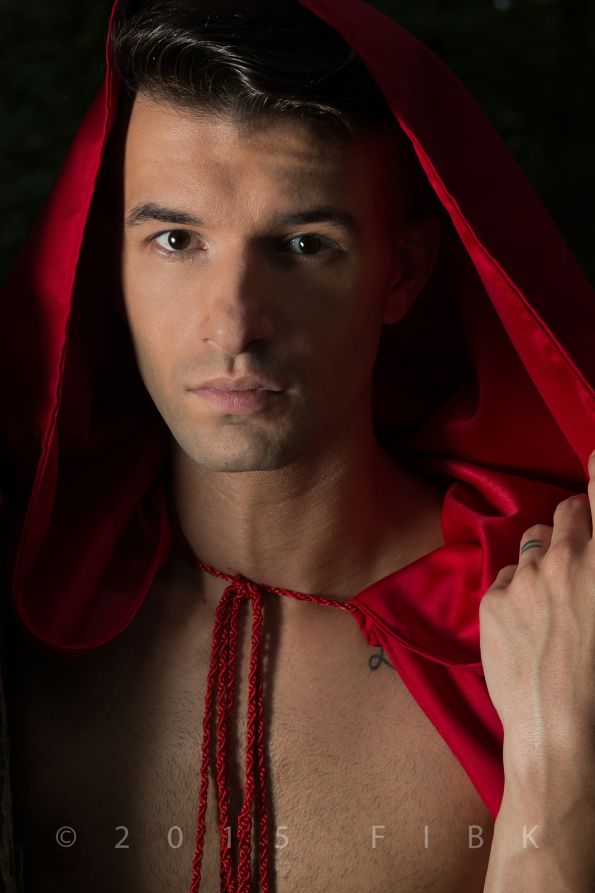 'The wolf thought to himself: 'What a tender young creature! what a nice plump mouthful - He will be better to eat than the old woman. I must act craftily, so as to catch both.' 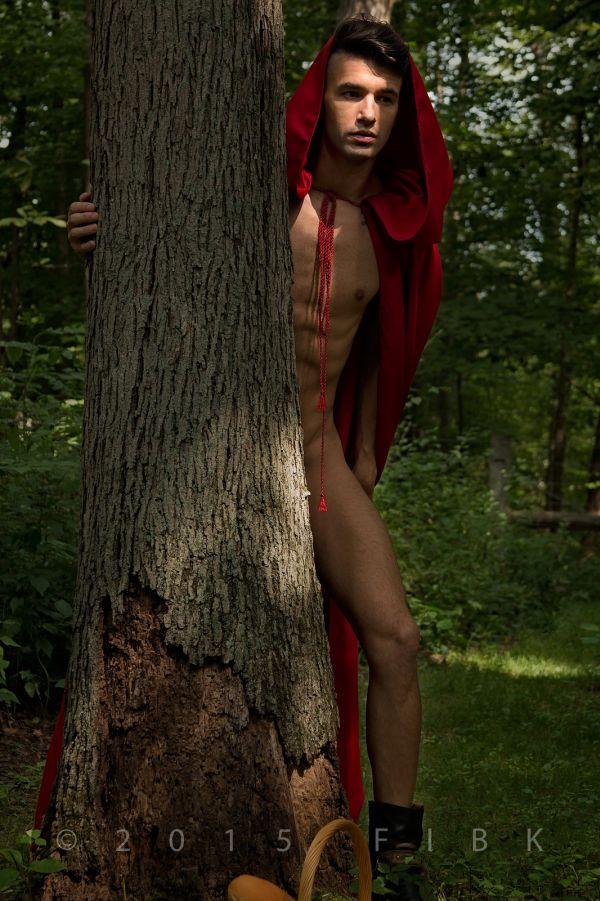 Given FH is story based, how could I possibly pass up a shoot inspired by the tales of two of the greatest storytellers of all time. This is not the first time I have presented work based on the Brothers Grimm fairy tell featuring the cape as red as blood, I did an entire day devoted to the fairy tales weaved within Into The Woods this past January. When I recently saw FIBK's version of Red, I knew that there was something new and unique I wanted to explore. Ken's images are visually rich and colorful and his Red, an erotically enchanting woods dweller, seems more than capable of not only handling, but even welcoming, any wolves that cross his path. 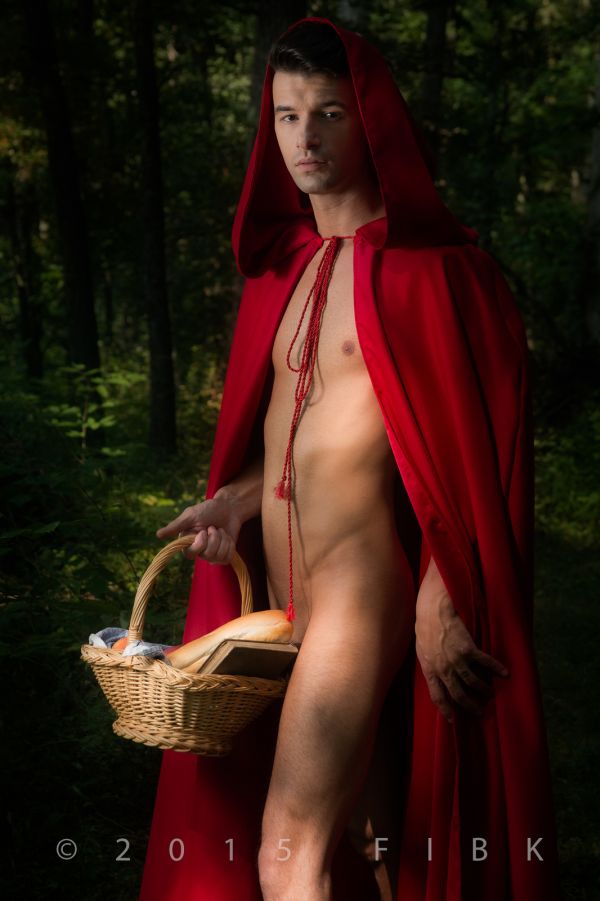 'I've been in fascinated with photography since I was a child. The idea of capturing a single moment in time, to save forever, has always captivated me.' 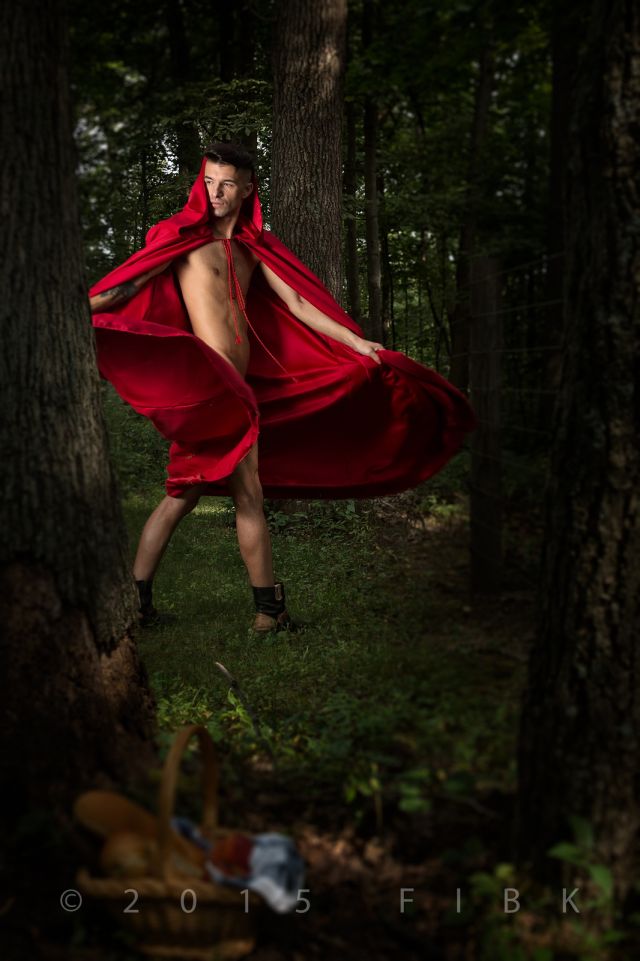 Ken's Red is beautifully inhabited by model Ua. Both are members of a small and exclusive on-line group specifically for models and photographers to meet, share ideas and make connections. Ken shares that during the group's beginnings, several members expressed interest in doing a fairy tale themed shoot. 'A lot of ideas were presented, and the one that really stuck with me was Little Red Riding Hood. I new from the beginning that I wanted "Red" to be portrayed by an adult male as I almost exclusively shoot male models.' 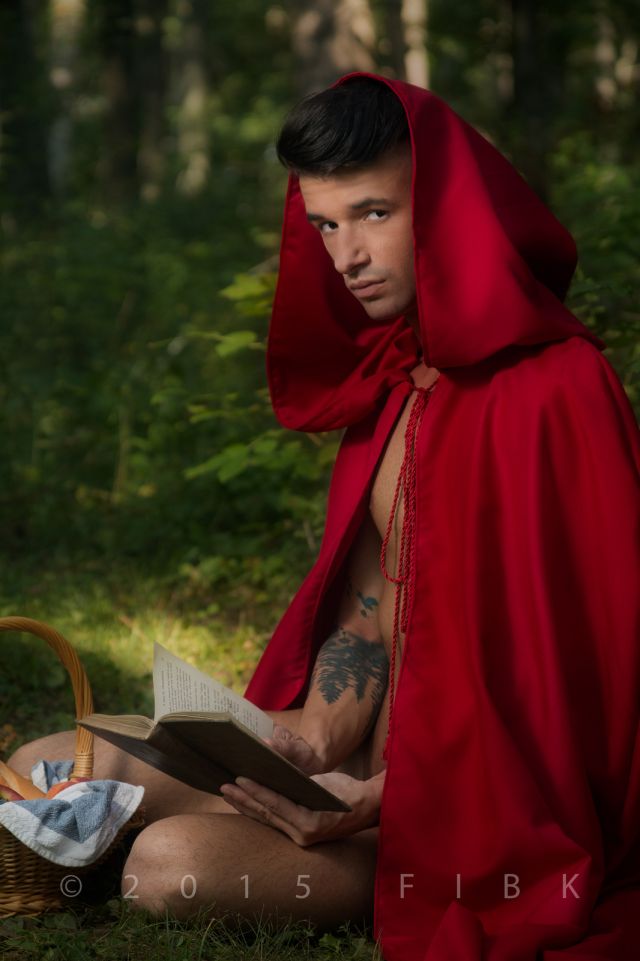 For Ken's idea to become a reality and come to life, he need just the right model, wardrobe, props and location. He contacted a friend he knew was great at making costumes and his friend agreed to design and create the hooded cape. Another friend of Ken's agreed to let him use his wooded property for the location. All that was left now was finding the perfect model to inhabit Ken's vision of Red. 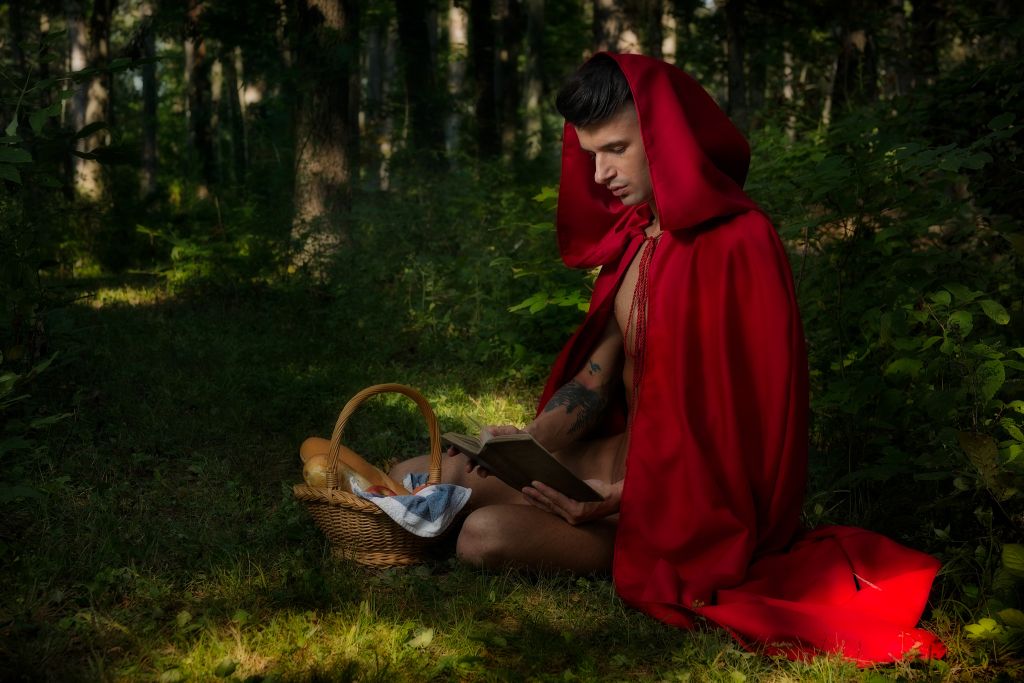 'I presented my idea of a slightly erotic, grown up male version of Red Riding Hood to the group, and asked if any models were interested in playing the part. I was delighted when Ua responded to express his interest! Ua and I met a couple of weeks before the shoot to test the hooded cape and work out the minor details for the shoot, and set a date and time. I have to say that I am very pleased with the results! As a model, Ua was fantastic to work with. He was quite adept and maintaining a pose, very enthusiastic regarding the theme, and very comfortable in front of the camera.' 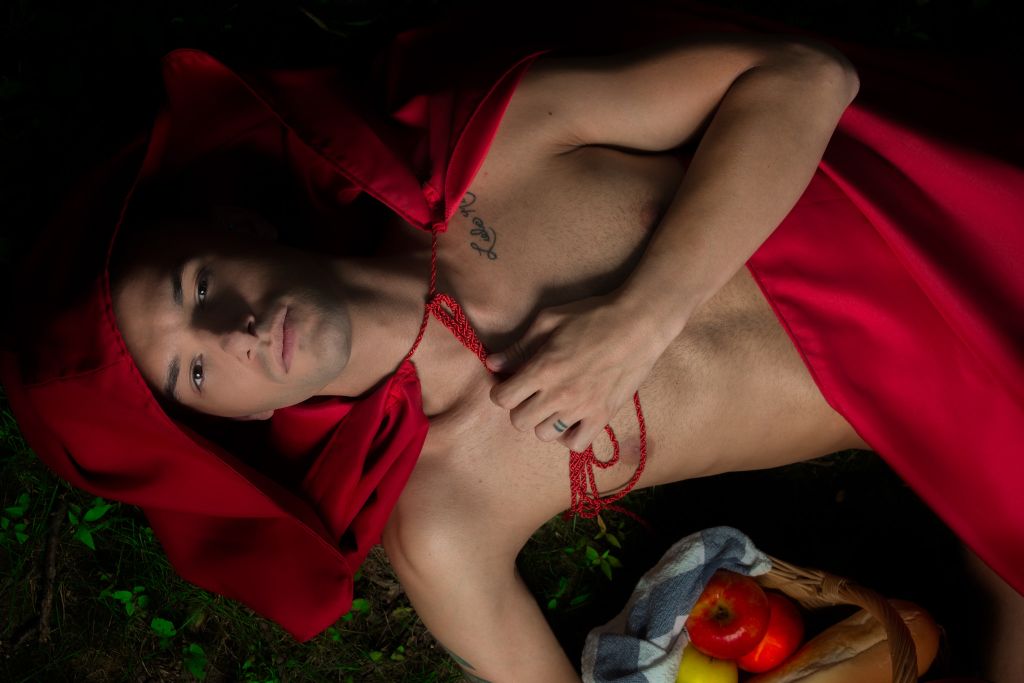 As you can see from the final images, everything on Ken's list came together perfectly. The red cape visually draws you in and Ken surrounds Ua and his cape with lush colorful visuals. From the basket, bread and apples, and the location which couldn't be more perfect if it were designed specifically for the story. Ua makes the perfect Red, his incredible body would most certainly lure any hungry wolf, but Ua also moves elegantly with the cape and his face and beautiful eyes all blend to perfectly complete Ken's vision and story. 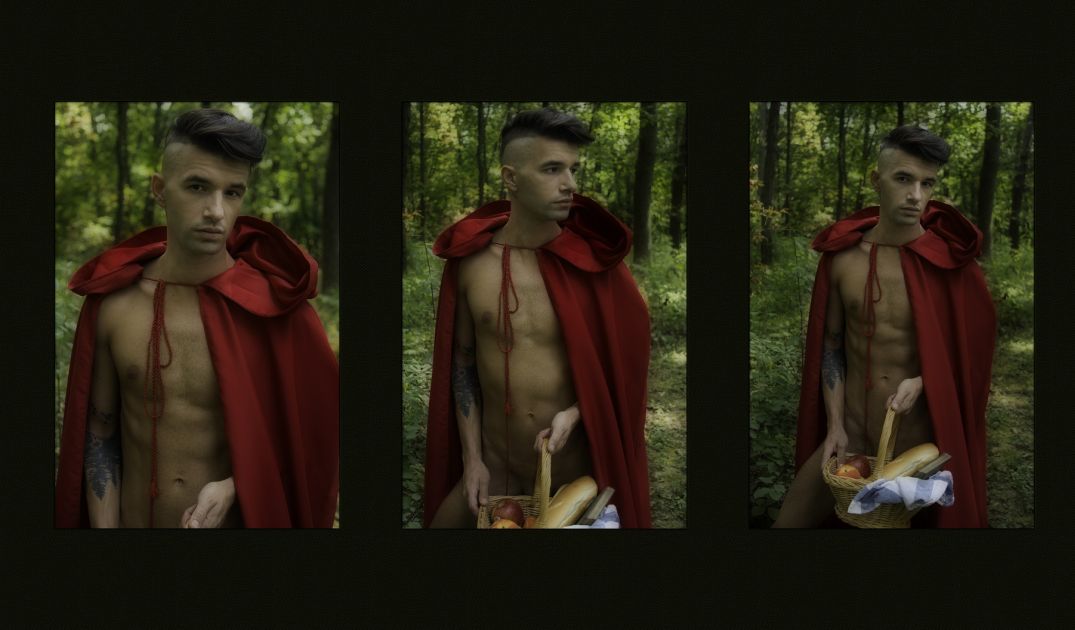