Favorite Pic of the Day for May 29th 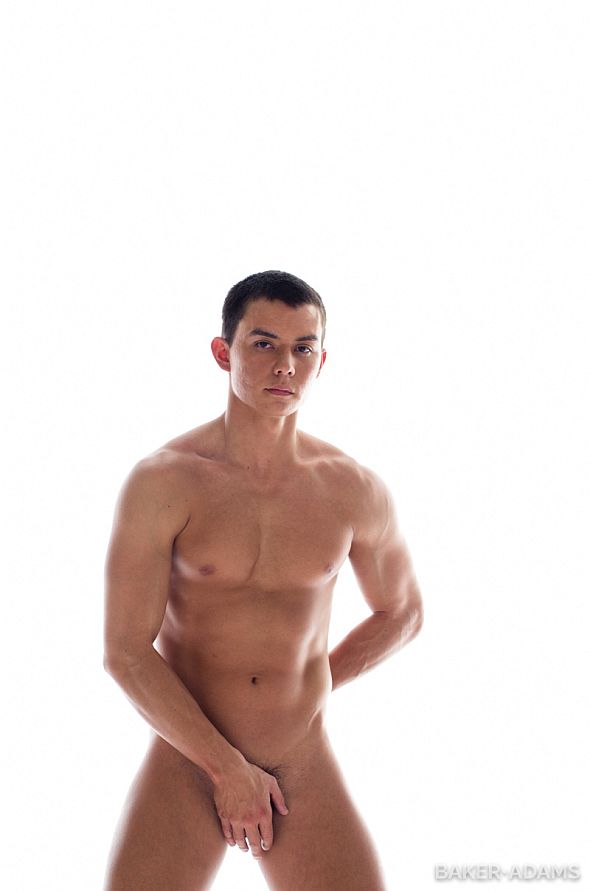 Above:
Brendon by Baker and Adams
-See More Below-
~Check out today's Birthdays HERE:~
at May 28, 2017 No comments: 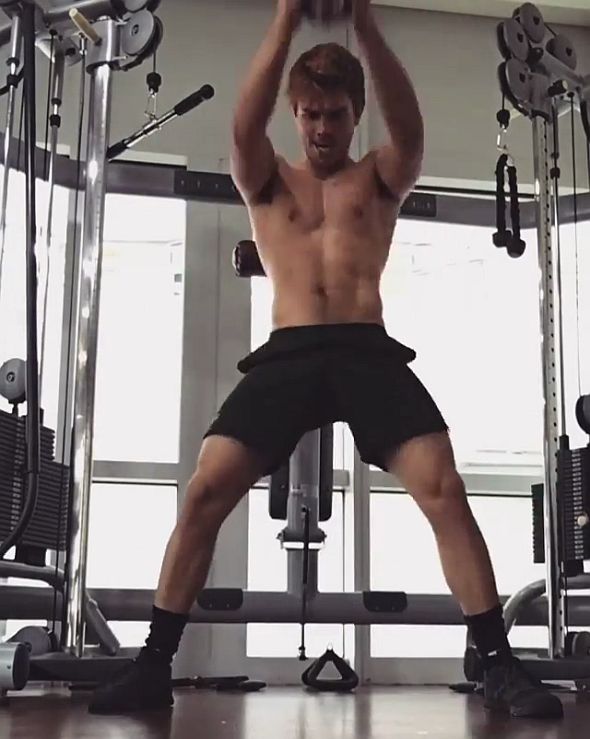 With his Dumb bell swing and burpee combo, Riverdale's KJ Apa works out after a long day in London. Great demonstration on how he keeps Archie Andrews looking so buffed for all those shirtless scenes. 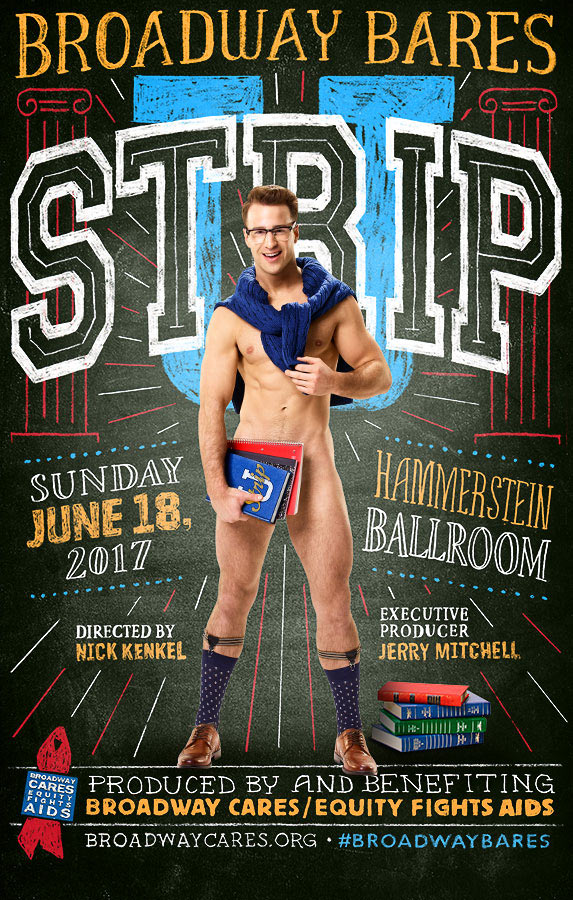 It's just about that time for Broadway, and Broadway Bares to shine. June is the month for Broadway Bares Fire Island, (June 3rd) The Tony Awards (June 11th) and Broadway Bares (June 18th). If you haven't checked out this years student bodies of Strip U, what are you waiting for. Many of Broadway's hottest, and most talented men are heading to Strip U for the annual fund raiser stripathon. I profiled my many of my favorites in a post last year which you can check out HERE: 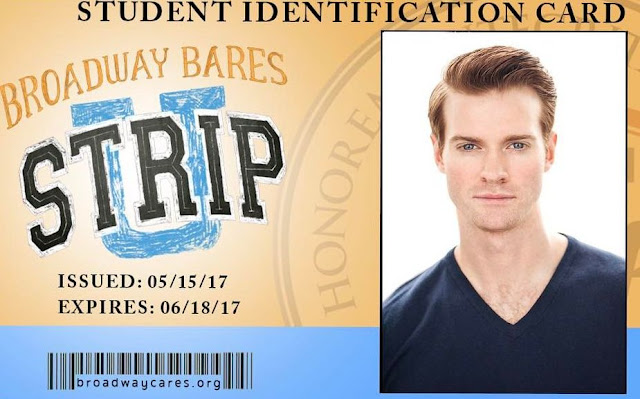 Check out the Broadway Cares Fundraising page HERE: to support your favorite stripping student. I have featured many of the talented actors, singers and dancers on FH including Mark MacKillop who is currently on tour with Dirty Dancing: The Classic Story on Stage. 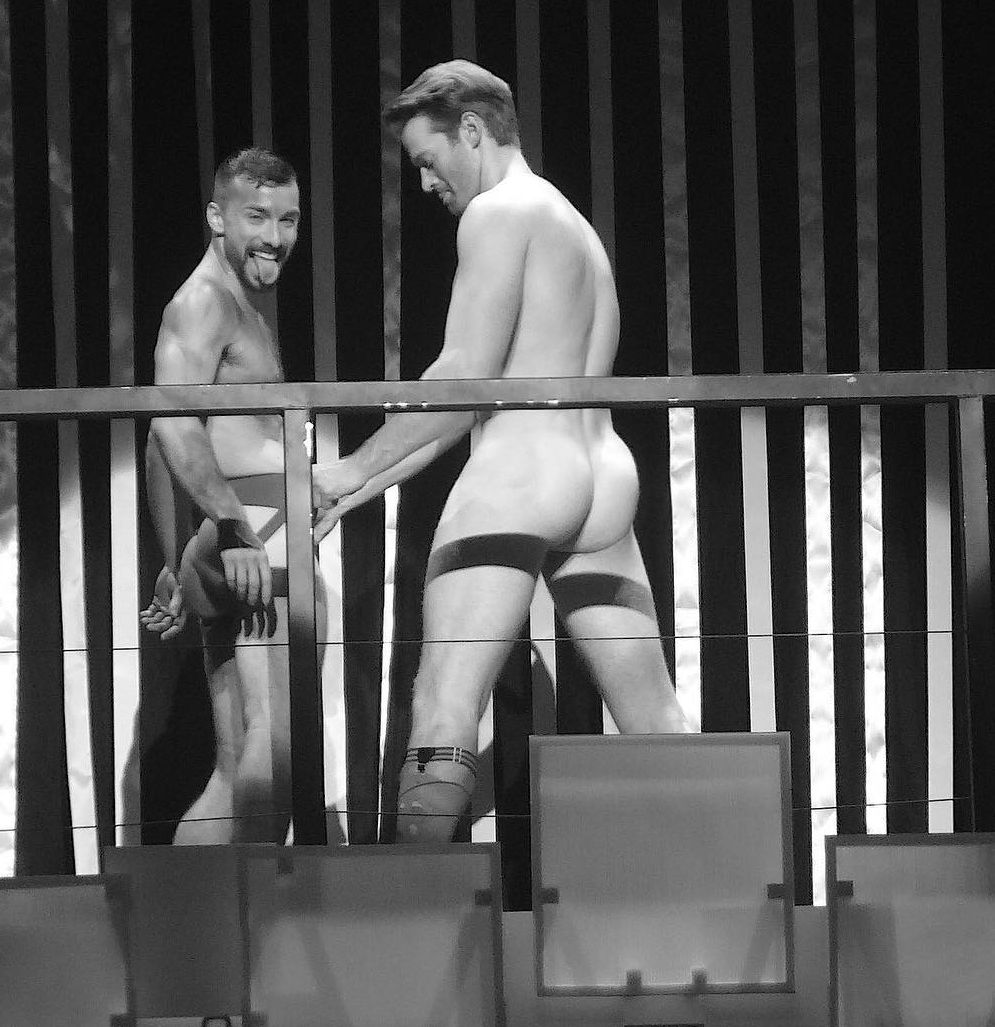 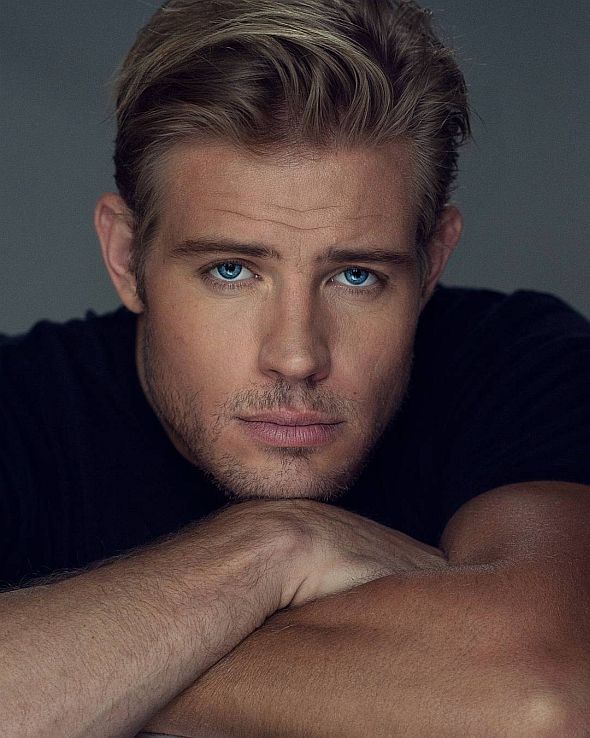 Back in 2007, in the first month of FH, one of my first faVorite hunks to feature was model and actor Trevor Donovan Neubauer. (HERE:) Although Trevor has since dropped Neubauer from his official credit, the 38 year actor hasn't dropped any of the qualities that make up his considerable appeal. 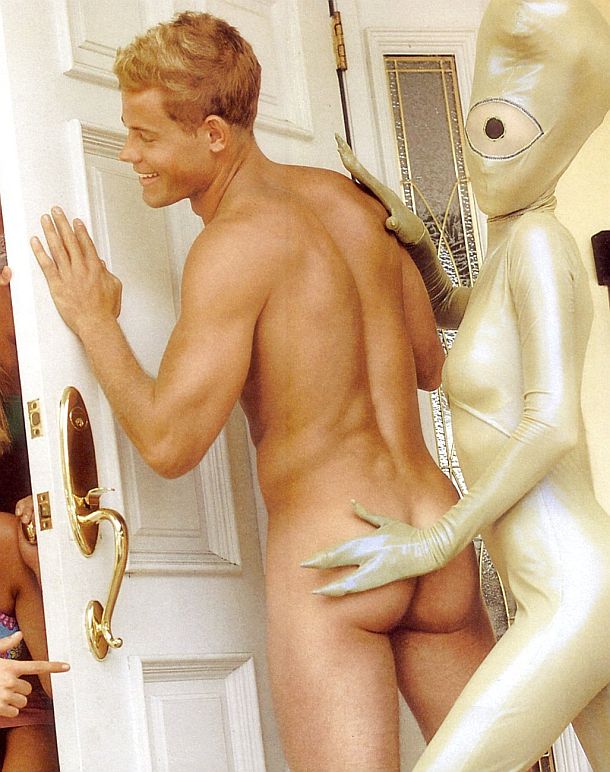 If you follow Trevor on Instgram, you know that over the past several months, he has been posting a few visual then & now themed shots. Recreating some of his most famous images, including some of his nudes with an updated shot of the same pose. Except for being a bit less blonde, and having bit more facial scruff, Trevor looks as hot, or hotter, than he did when the original was taken. Check them out for yourself on Trevor's Instagram HERE: 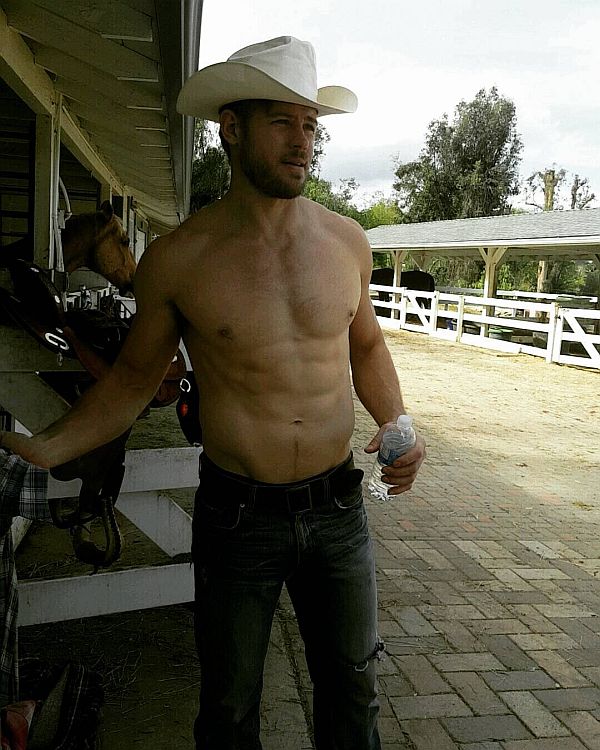 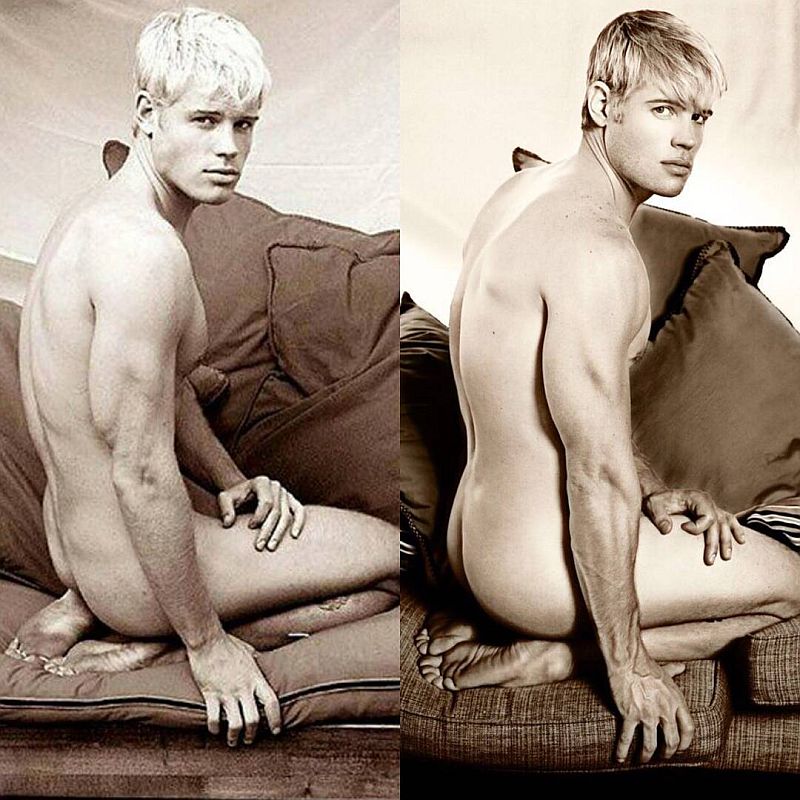 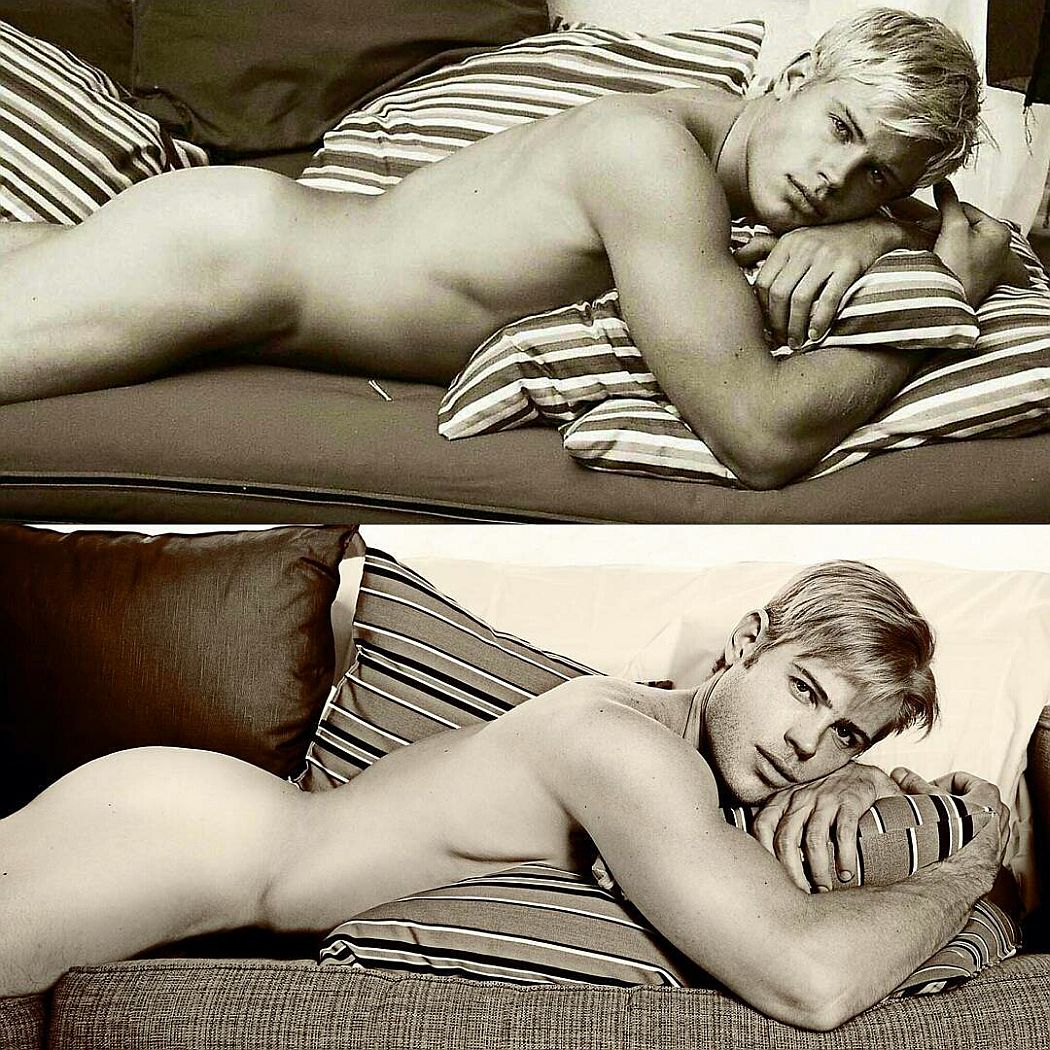 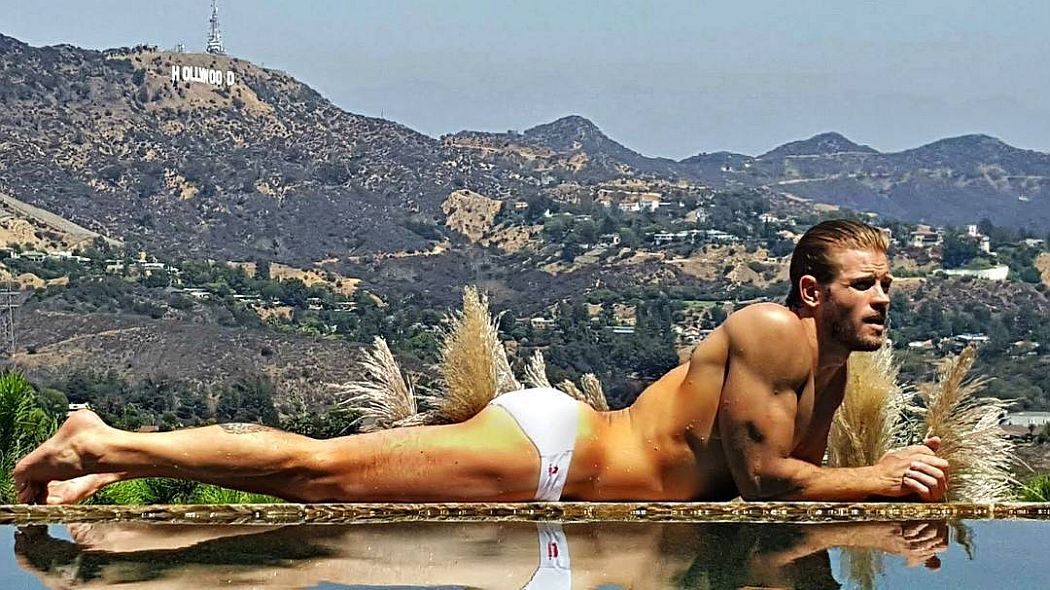 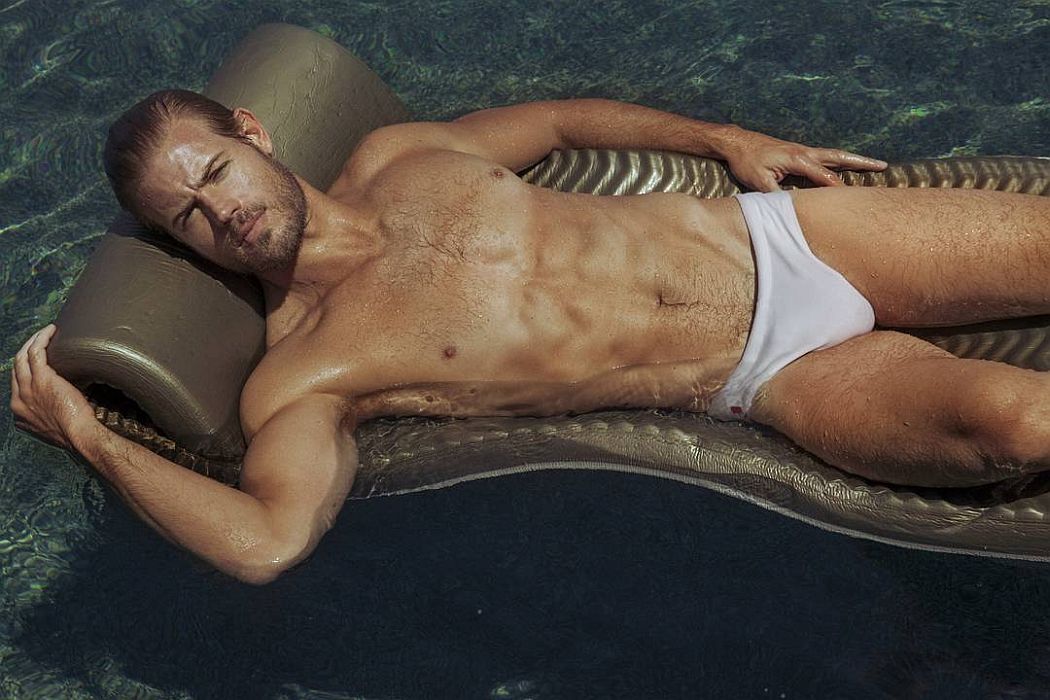 Email ThisBlogThis!Share to TwitterShare to FacebookShare to Pinterest
Labels: Instagrams That Inspire 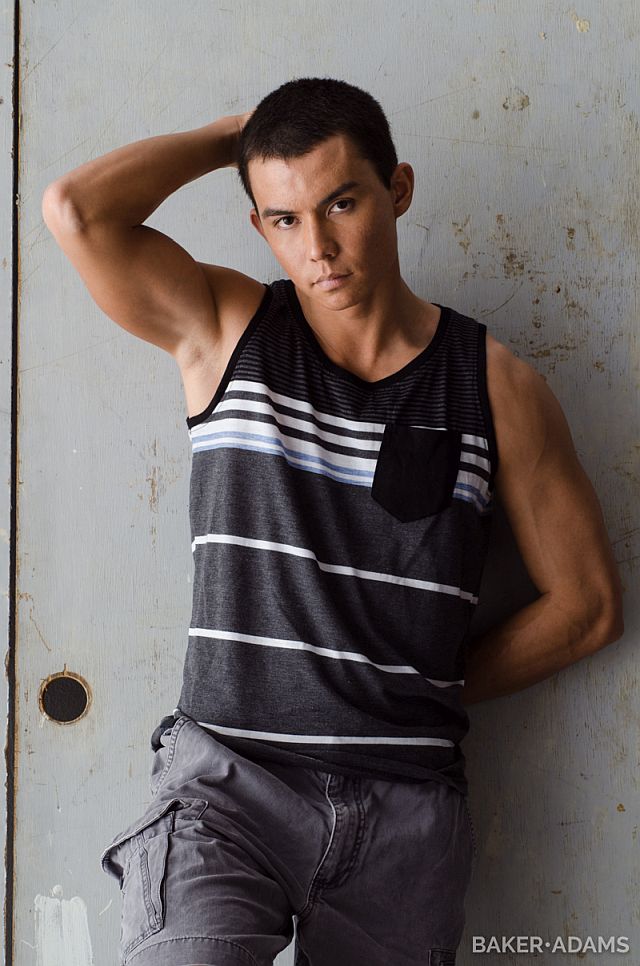 'Every so often you run across a guy who’s a real natural in front of the camera. He’s easy to photograph and easy to work with. It doesn’t happen often, but Brendon was one of those guys.' 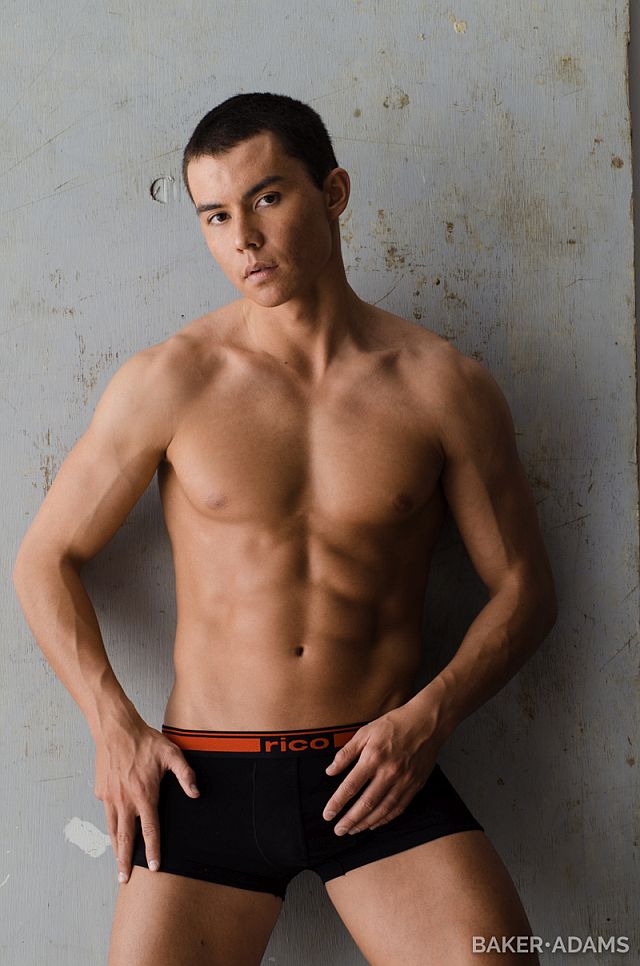 Every so often I use the word 'complete' in my description of a photographers work. My use of the word is not about degree of nudity, my intent is to describe how fully a particular artist or shoot has captured a model. I have written previously that when I first saw images from Baker and Adams, I was with how skillfully they capture both body and pose with beautiful and unique head to toe depictions of their subjects. 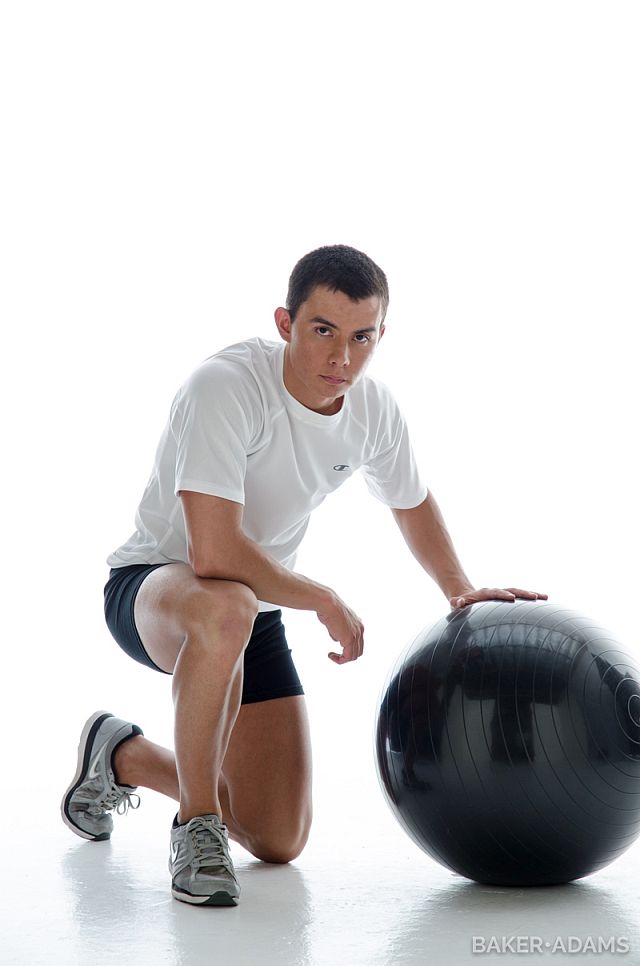 Each set of images that I have featured are full model portfolio's, capturing portraits, fitness, full body and even character themed imagery. In the case of Brendon, that character is that of a high school or college wrestler. It was the wrestling themed images that had me reaching out to Baker and Adams about featuring Brendon. 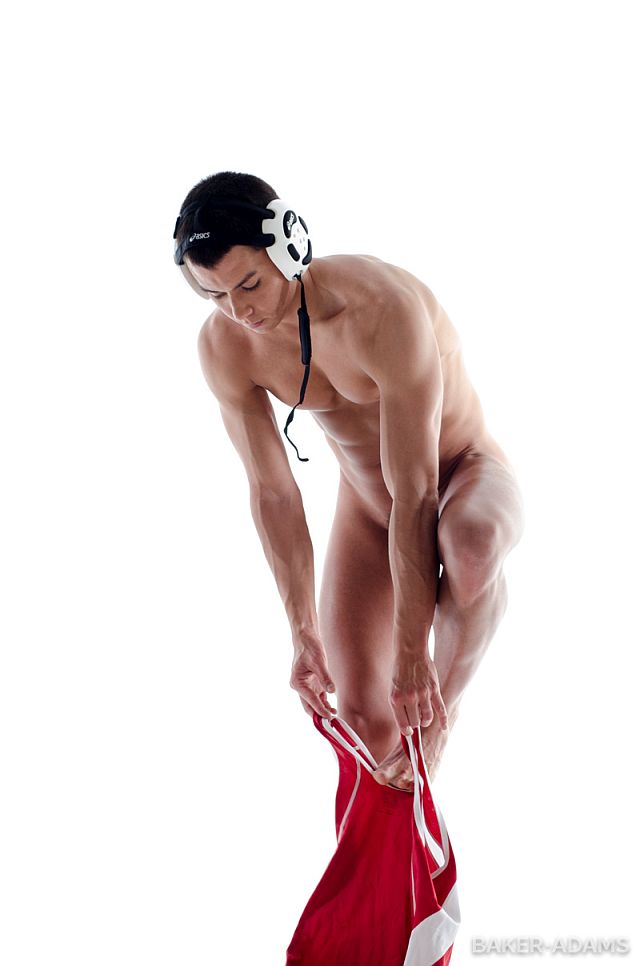 Brendon has an incredible body, every inch toned and sleek, clearly from a passion and commitment to fitness. The wrestling singlet is not only sexy, it is also a perfect way to highlight Brendon's hard work.  It also represents a sport that symbolizes the intense dedication required to keep a body in fighting form. In wrestling, in order to takedown one's opponent, you don't just physically bring them to the ground, you have to focus on their strengths and weaknesses in order to choose the takedown technique to ensure you land on top. Brendon is clearly a takedown machine, a model at the top of his game both physically, and mentally. It is visible in his not just his body, but his eyes, which speak to the intensity of his passion and drive. Baker and Adams used their 'tag team' approach, with Baker's focus the leg work and creative side, and Adams as the closer, focusing on the technical and finishing pieces of the team's creative process. It helps, when you have a model like Brendon. 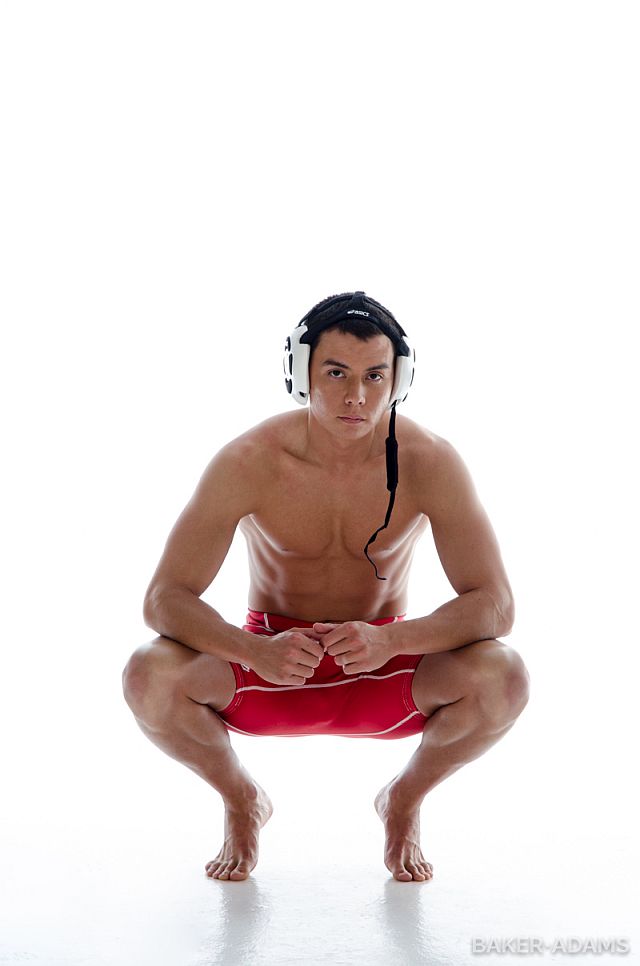 Adams
'I like high contrast, deep shadows, translucent highlights and a wide range of tonalities. For the white limbo shots, I lit the white cyc with my strobes and let the light wrap around Brendan from behind. Fill light came from the floor or a nearby 4x8 foam core "V-card". Not only do these large sources light him, but they reflect in his skin to create a wide range of beautiful highlights that reveal subtitles of shape and form.' 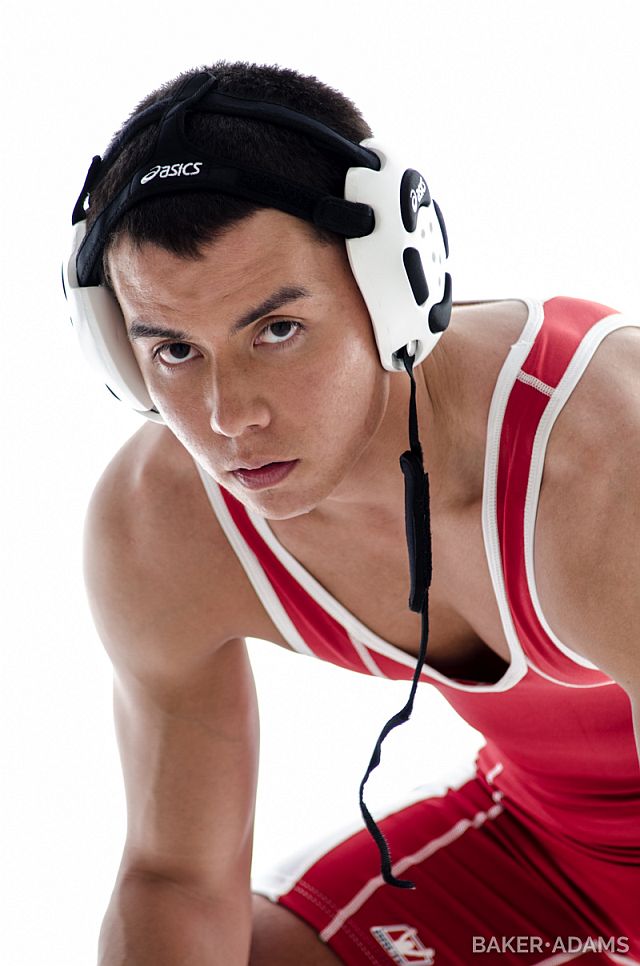 'For the other photos, we placed Brendon against the studio wall and used the same white cyc lighting as a soft side light, as if from a large window. I then surrounded Brendan with black foam core sheets to eliminate ambient fill light and make the shadows as dark as possible. They're so dark that, in one of the photos, his white shirt creates a highlight in his skin. I love that kind of rich detail.' 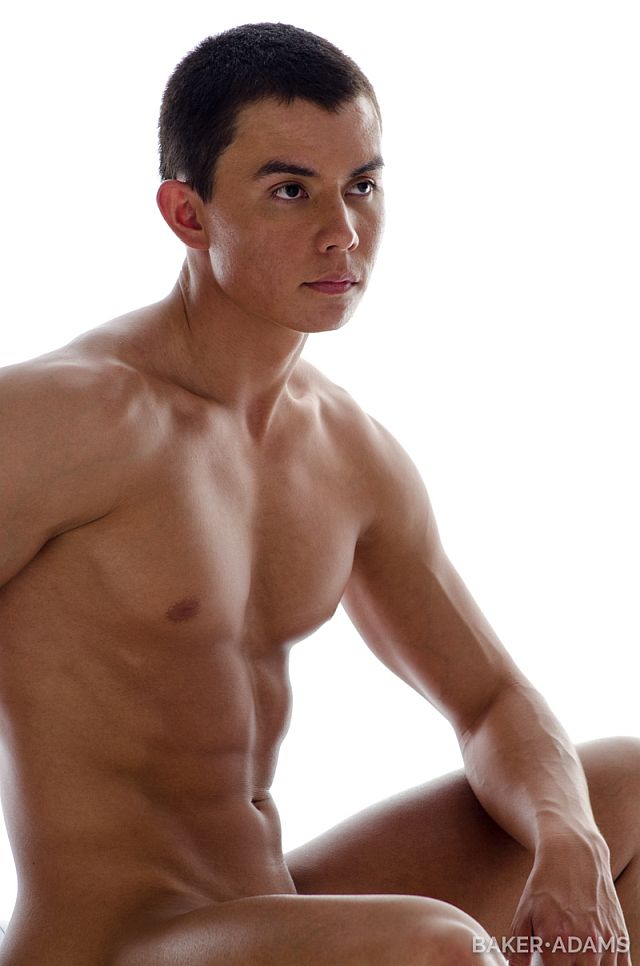 Baker
'Brendon was interested in our ideas from the beginning and brought confidence and an open mind to our shoot. With Brendon, we enjoyed a solid collaboration and complete professionalism. Brendon has a natural poise that makes for beautiful yet strong images. Brendon knows how to hold his body and can be tough or sensual depending upon the shot. Brendon understands the photographic process and was patient as changes and tweaks were made to lighting and set up. Such a beautiful guy.' 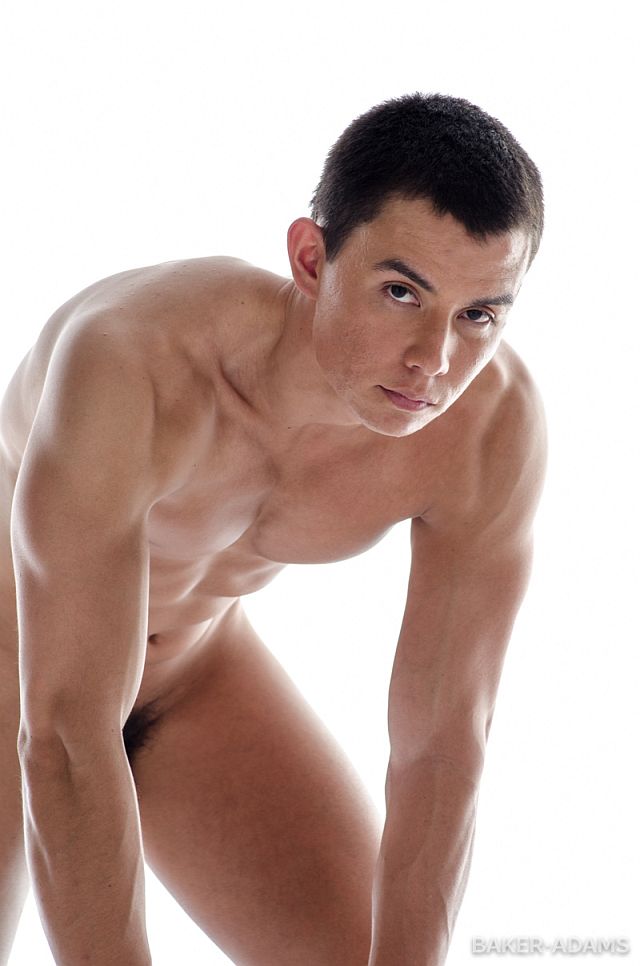 Baker and Adams on ModelMayhem 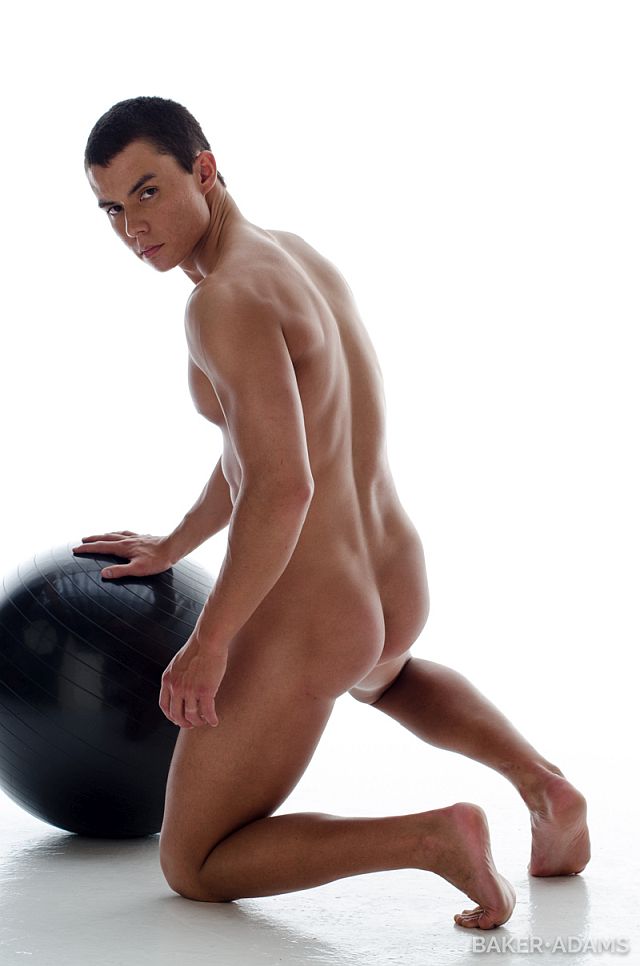