Favorite Pic of the Day for July 1st 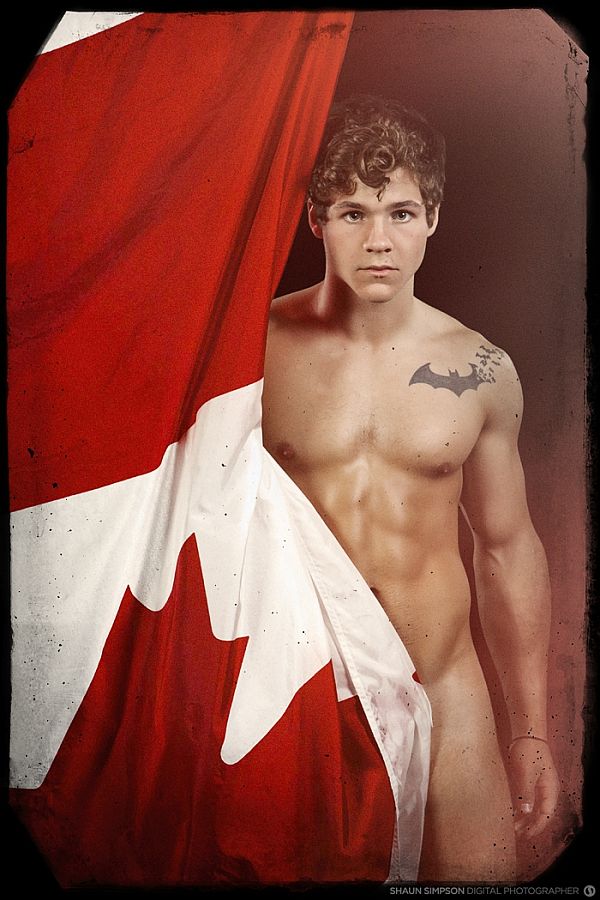 Above:
Michael Hamm by Shaun Simpson
-See More Below-
~Check out today's Birthdays HERE:~
at June 30, 2017 No comments: 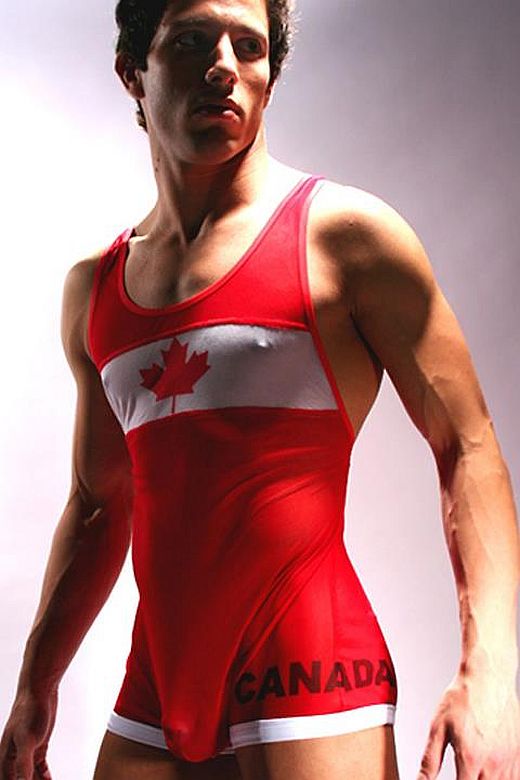 'Canadian pride may not rest on our sleeves, but it resides deeply in our hearts.'
Steve Miller 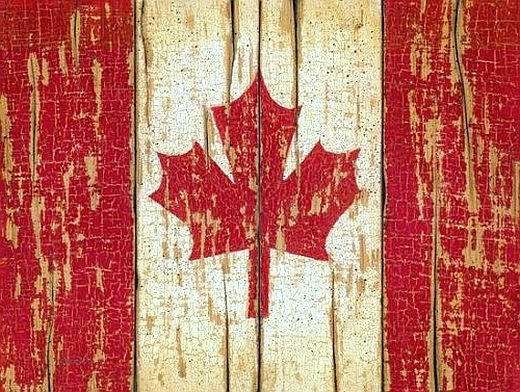 'It’s never felt more Canadian to be Canadian than it does now.'
Douglas Coupland 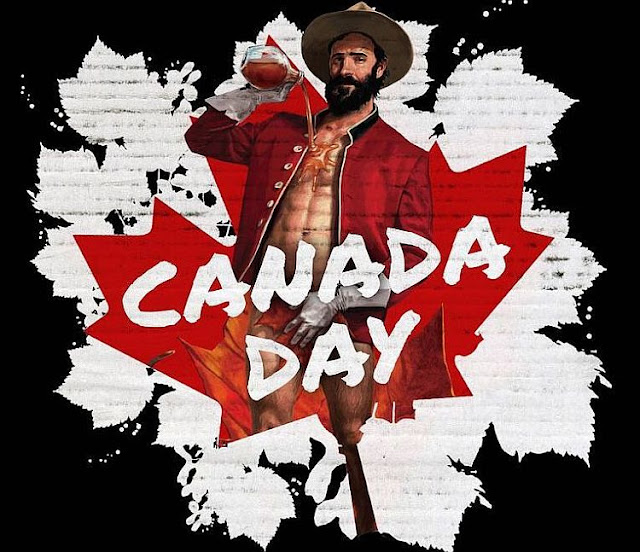 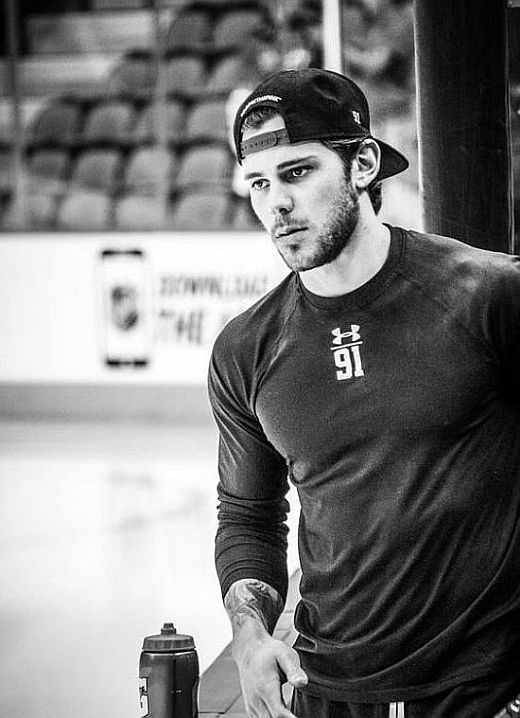 Over the last ten years FH has covered some of Canada's hottest and most talented men. From the many Canadian photographers and models, to the actors and athletes and reality contestants. I started to do a link list, but the list started to get incredibly long. My 12 Days of Christmas posts along had dozens of Canadian actors given so many of the Hallmark Holiday specials are filled BC on the West Coast to Nova Scotia on the East. 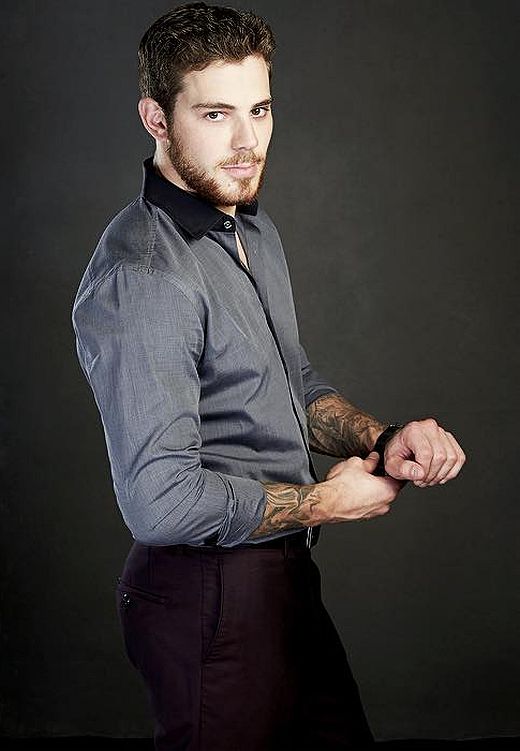 Instead, I went back to a favorite, NHL star Tyler Seguin. Although Tyler currently plays for The Dallas Stars, the Canadian born Seguin's passion for hockey began when playing in the minor hockey with the Whitby Wildcats of the Ontario Minor Hockey Association. I featured Tyler once before, after his appearance in ESPN's body issue a couple of years ago. (HERE:) I thought Overtime for Tyler was definitely in order! 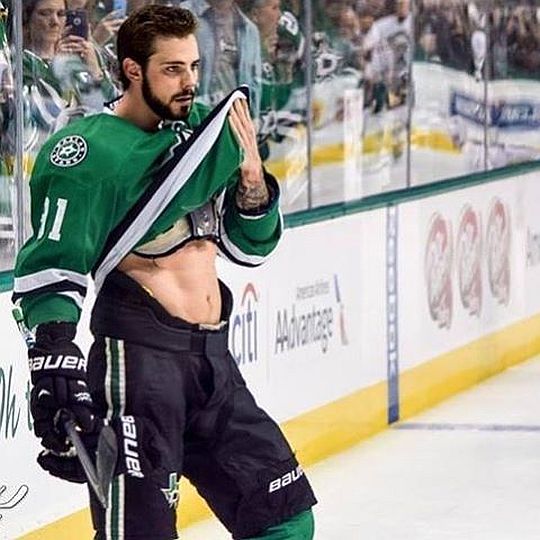 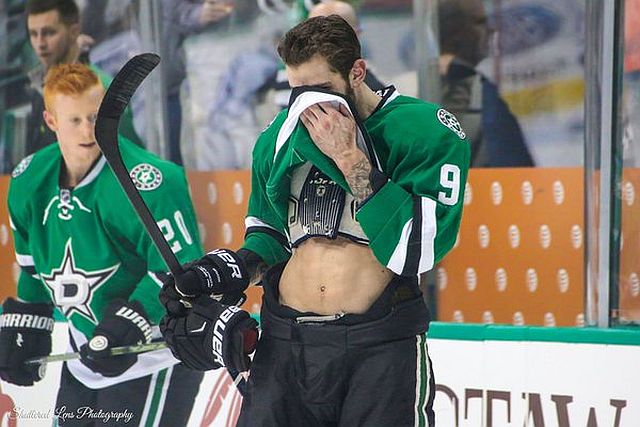 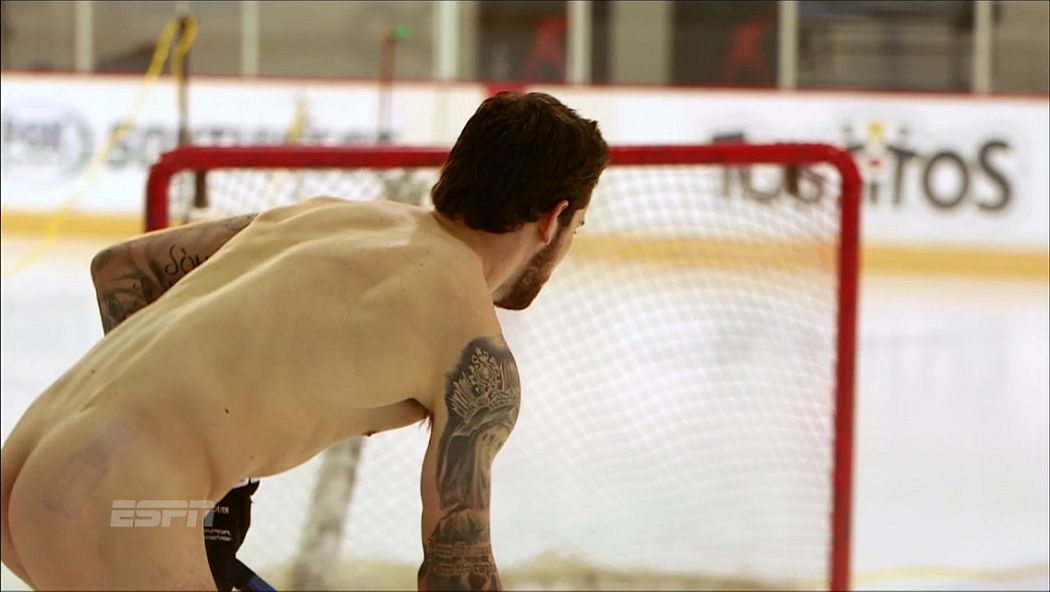 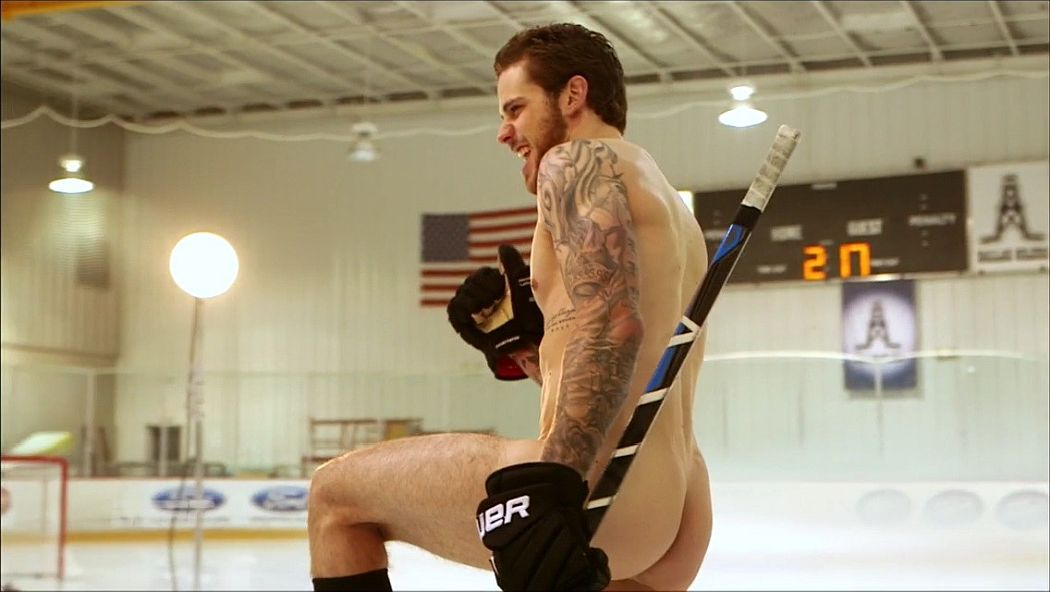 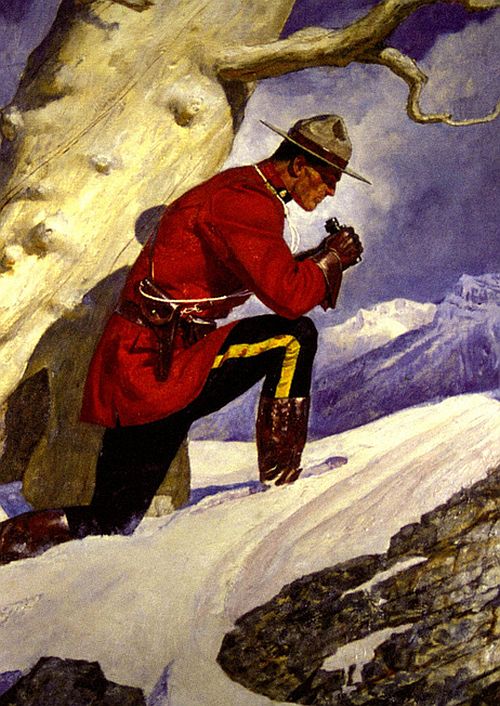 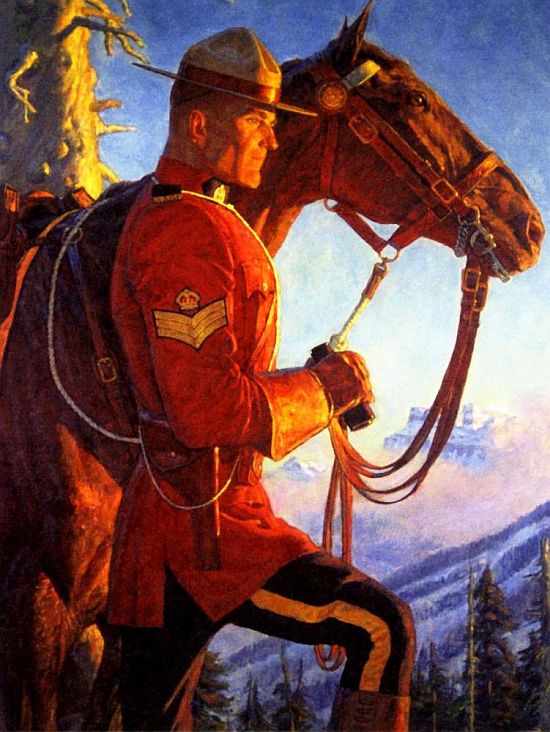 When thinking of what symbol of Canadiana to feature this year, there was really only one choice. The maple leaf is beautiful, especially in Autumn, but not really suitable for a FH salute. After quickly deciding I couldn't devote time searching for images of beavers.... I decided on The Royal Canadian Mounted Police. 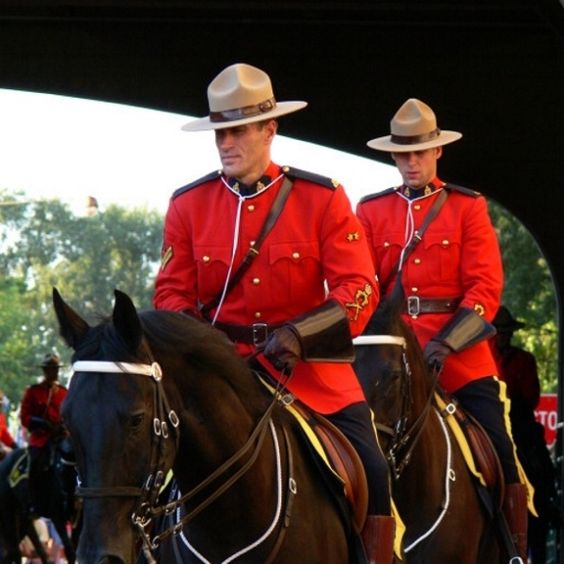 The RCMP have been around for close to 100 years and have always been a symbol of masculinity and Canadian strength. Although today, the RCMP's goal is to hire as many women as men, historically, it was men wearing the red coat and tight blue or black pants. In films, Mounties are generally written as honorable and respectful, usually written in scenes with them searching for criminals through mountains during blizzards and snow storms. Most times that I see Mounties in full uniform on TV or on the news, they are usually sweating through their red serge during a ceremony, funeral or government event. 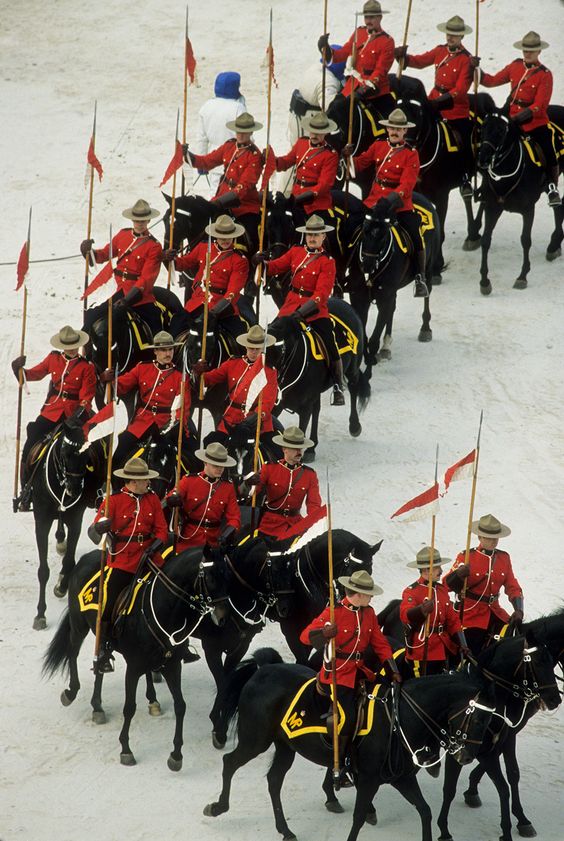 I remember was I was a kid my parents travelled to Ottawa for a wedding. When they returned, they gave us our souvenirs, mine, a plastic figure of a Mountie on a beautiful white horse. That Mountie remained on my shelves for many years until I left for University. Then, my bedroom became the 'sewing room', and the Mountie disappeared. I felt a sense of nostalgia and safety with that Mountie in my room, watching over me and guarding me when asleep.

Paul Gross in Due South 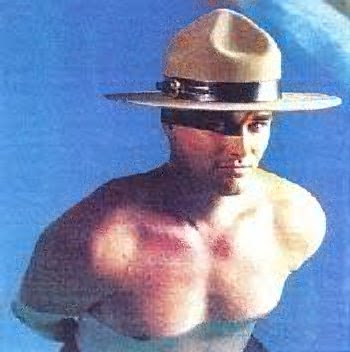 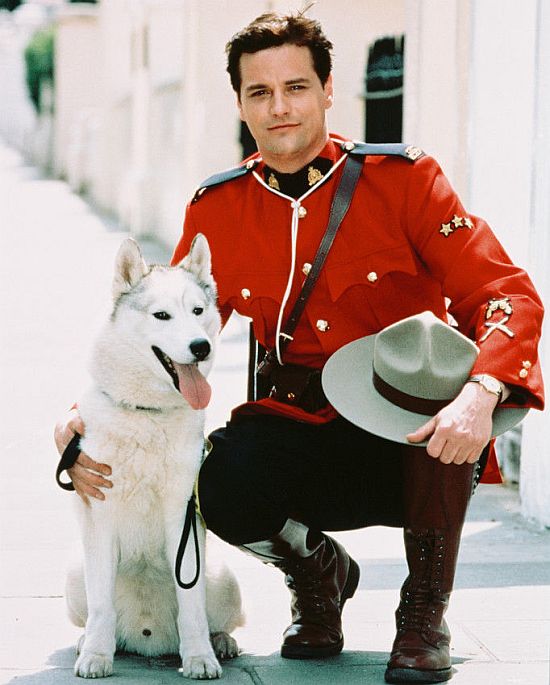 Daniel Lissing in When Calls The Heart 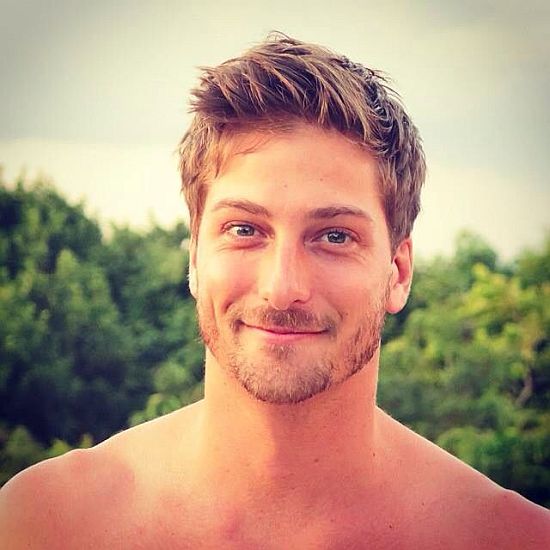 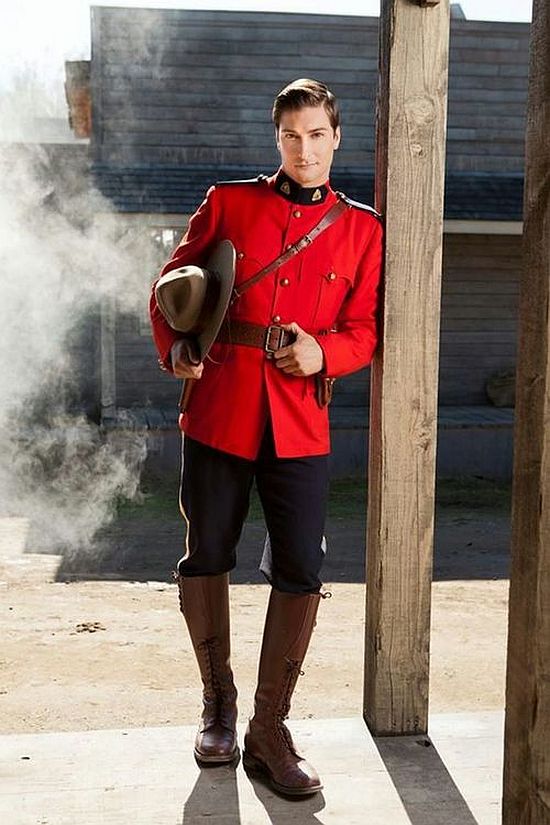 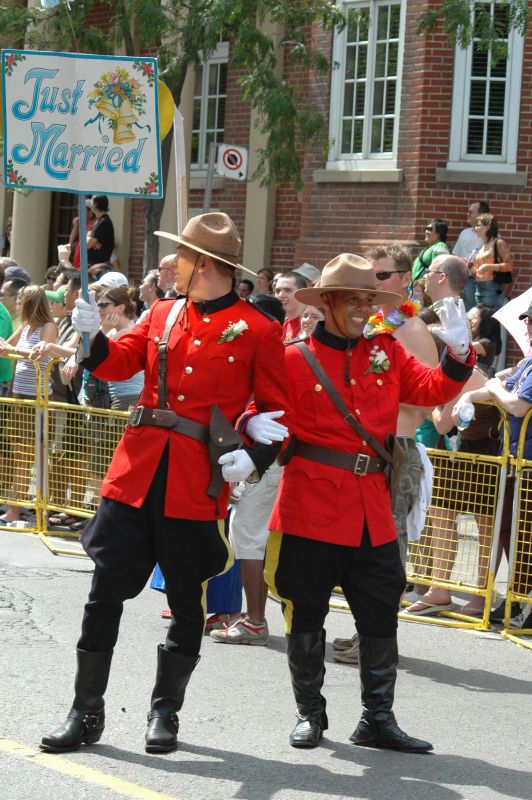 Colby Keller, not Canadian, but rocking the red! 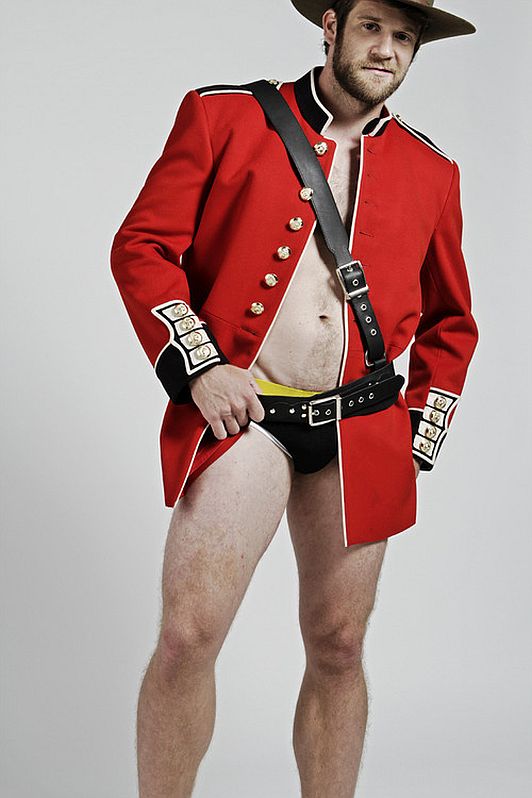 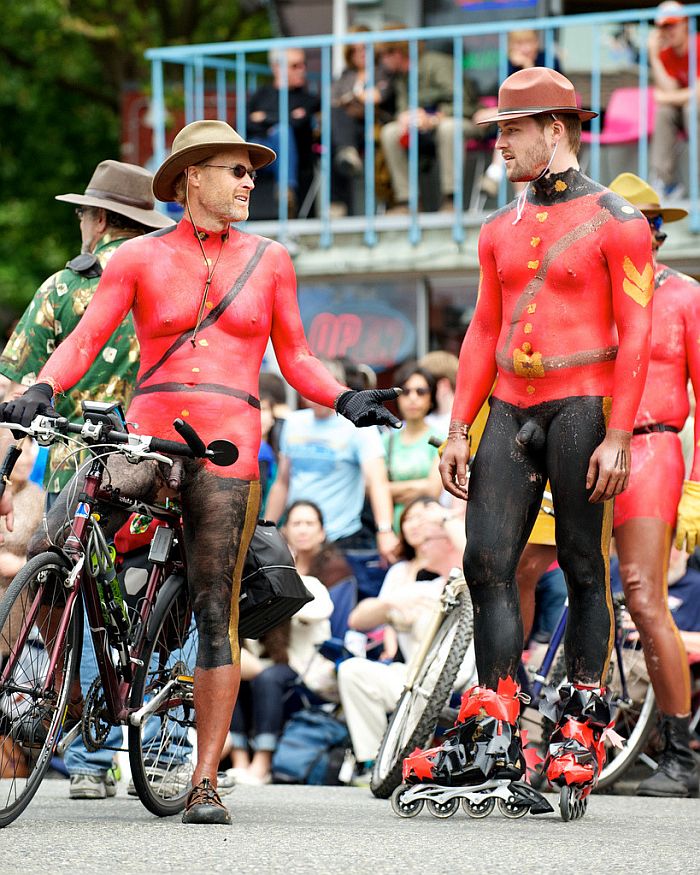 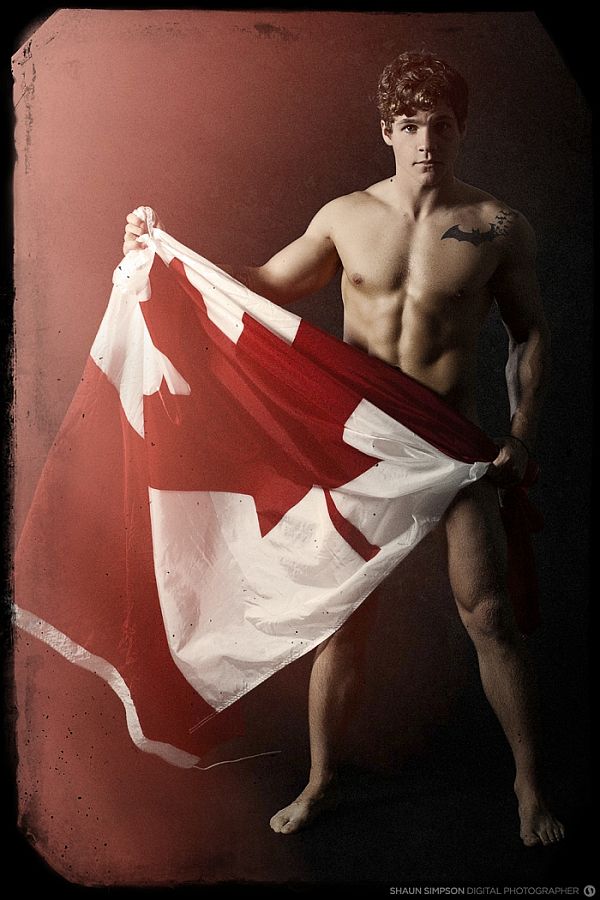 'I've always enjoyed the juxtapositioning in these shots of Michael's soft cherub-esque hair and his hard sculpted physique; almost reflecting Canada's famous apologetically friendly disposition, and our harsh frozen winters. Definitely a shoot we'd like to recreate at some point in the future, maybe for Canada Day 2018. ;)' 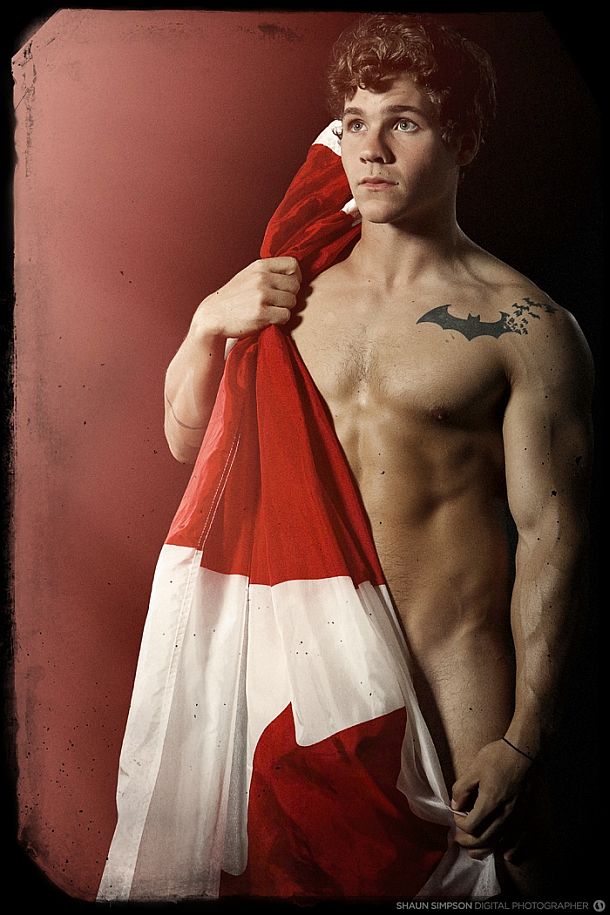 There are thousands of images on the web of models wrapped, or unwrapped, in the American flag. There are only a handful of similar shots featuring models with the Canadian flag. It may have a lot to do with population, or how people of each country express national pride. With the notable exception of hockey, Canadians tend to express their pride inwardly. This doesn't negate it's intensity, especially this year, with Canada celebrating their 150 birthday. 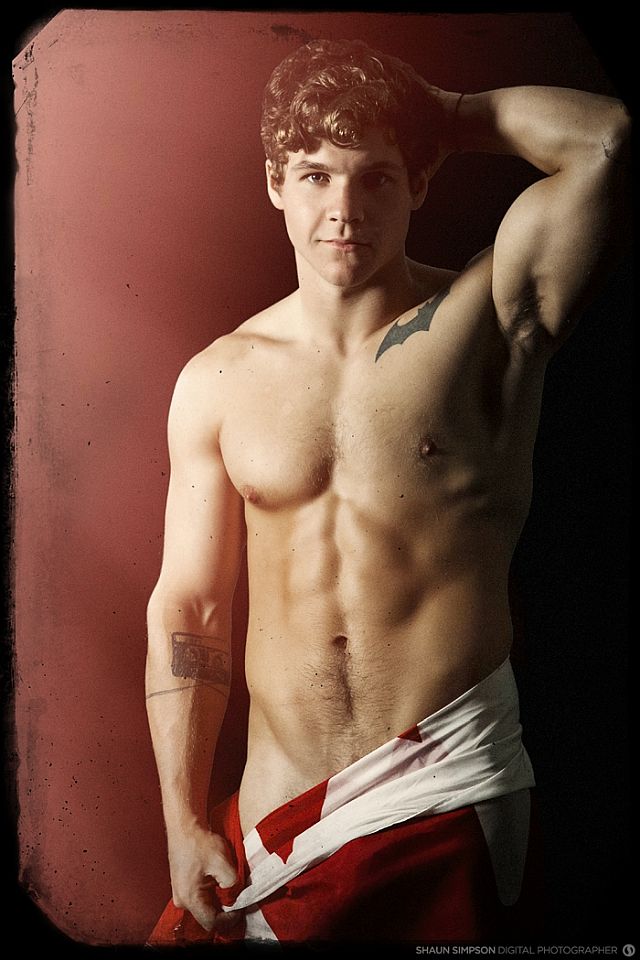 Thankfully a few artists have weaved the Canadian flag into their work, my favorite being Halifax photographer Shaun Simpson's images of model Michael Hamm. I have featured Shaun's work several times on FH and am excited to be able to feature his work with Michael. If you're a fan of either, you know the magic they create together. This magic is especially evident in work with Cosplay, a passion of both. Self described 'geek's, some of their Cosplay themed images have become iconic, especially the superheroes, they have vibrantly brought to life. 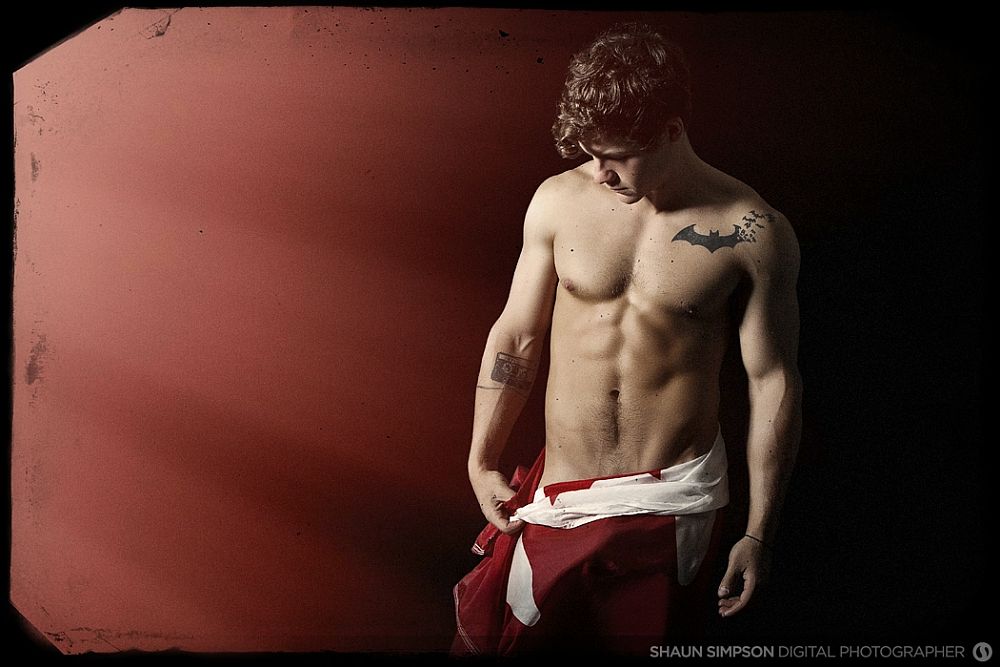 Michael blends his geek side with fitness and sexy better than any model I know, and Shaun knows just how to shoot it. These shots come from an impromptu shoot they two had together a few years ago, before Michael's rise to fame with his cosplay work. I had seen one of the images before, and was curious to if there were more. Thanks to Shaun for editing a few others to help FH commemorate Canada Day! 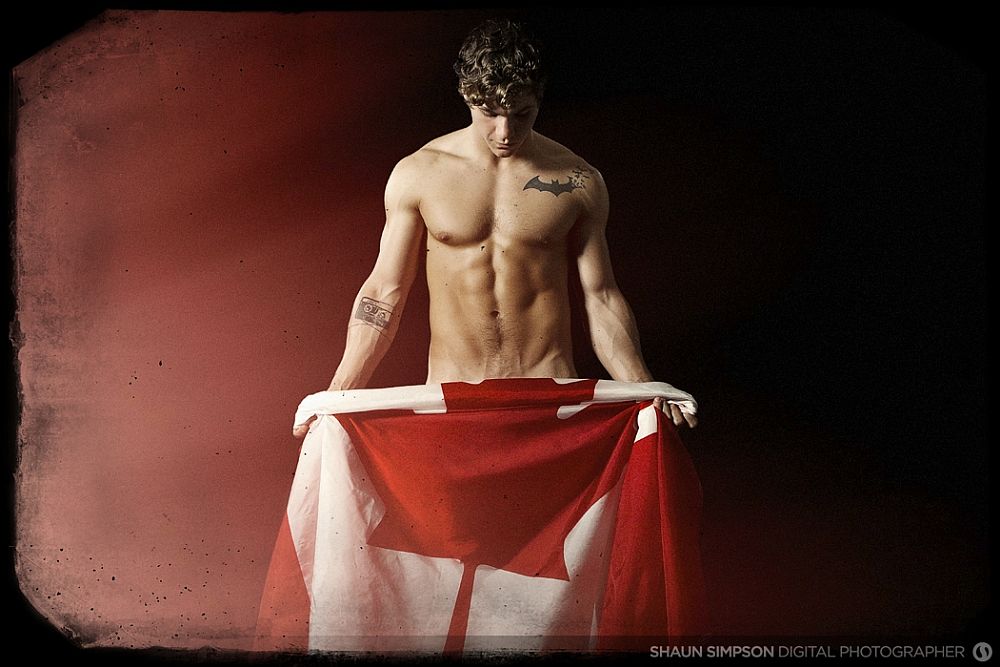 'The shoot was probably our quickest ever, we got into the studio, setup, shot, and wrapped things up in about 35 minutes; I recall it was a particularly warm day, in a studio lacking air conditioning. I've had the pleasure of working with Michael on well over a dozen shoots in the past few years; one of my favourite models, and bestest friends. We actually just finished another cosplay shoot on Thursday, complete with last minute location cancellation, and a multi-hour power outage; thankfully shooting with him is more like hanging out than actual work. Oh, and be sure to check out Michael's Facebook and Instagram page for more of our work together; you can subscribe to his Patreon account to check-out exclusive shots from our shoots, and special behind the scene stuff too.' 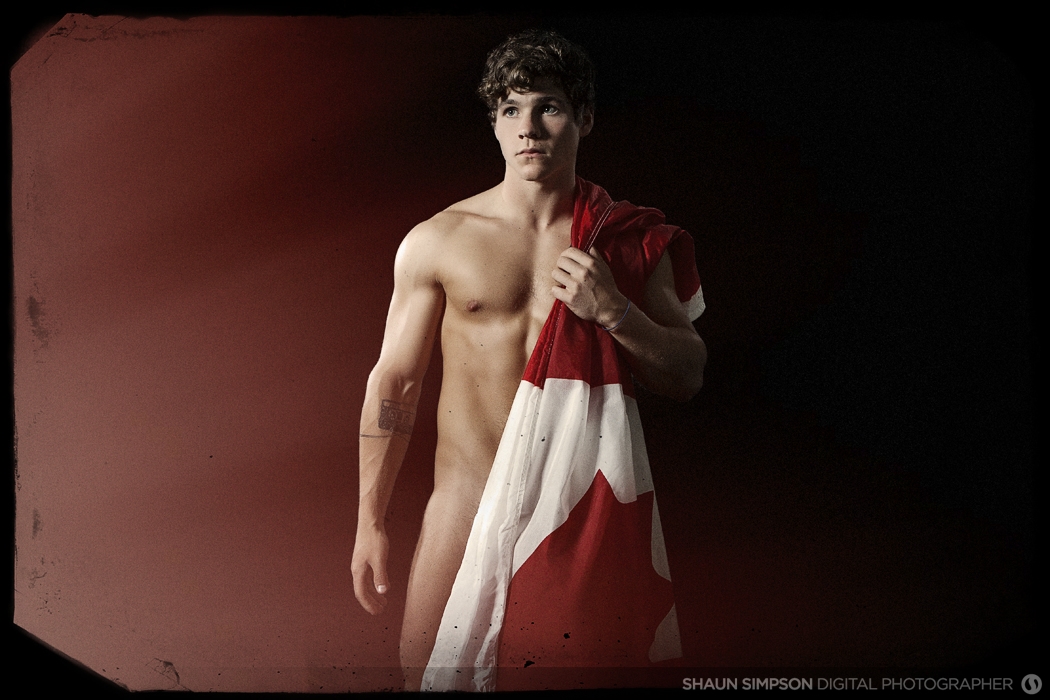 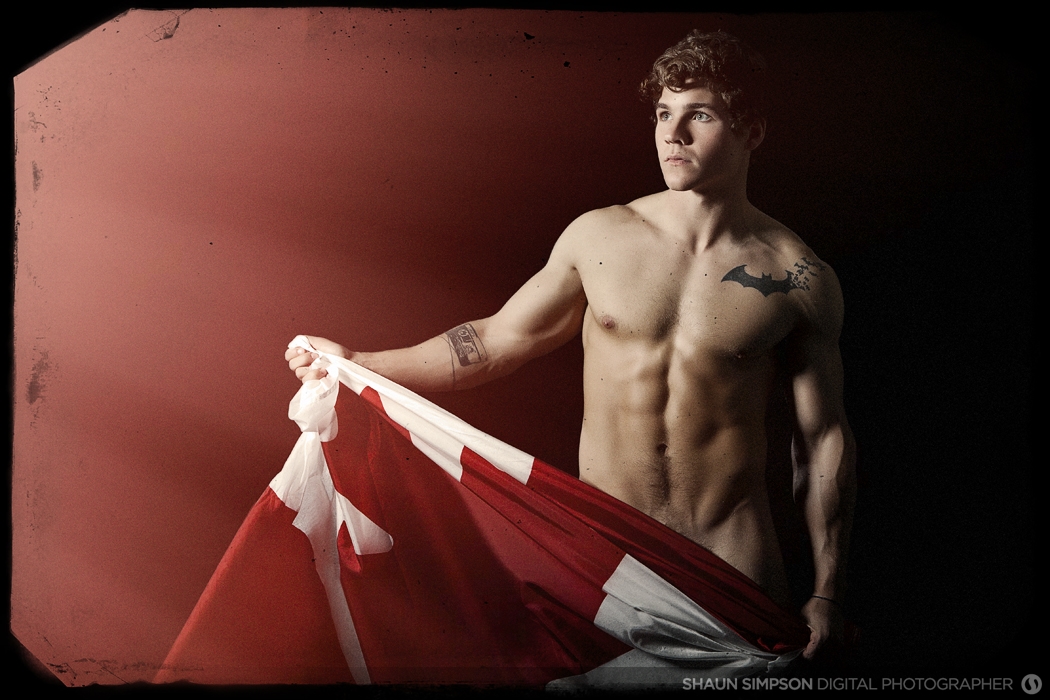