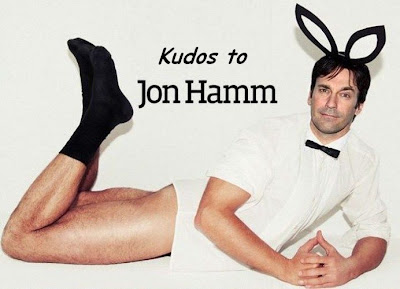 I don't generally support calling anyone stupid. I am not so sure however Jon Hamm called any one person stupid, I think his point was that the American public celebrates and even worse, in these very difficult times, financially support the stupid actions of others. I am not sure even Kim or Paris themselves could argue they have both made many stupid moves in their negotiation and manipulation of the American public and press.

I applaud Hamm however for saying what so many of us think. We are a dumbed down culture where PBS struggles to survive (yeah Downton Abbey!) and Snooki makes the cover of national magazines. Paris thank goodness is pretty much history, replaced of course by Kim who seems on her way out. Sadly someone else is already in the wings, just waiting to drop his or her undies, grab the bottle and head to center stage. The spotlight stupidity is not on them however, it should be shined brightly on those who remain seated in the audience for the next show. That theatre, if we were smart, would be long empty.

Email ThisBlogThis!Share to TwitterShare to FacebookShare to Pinterest
Labels: kudos