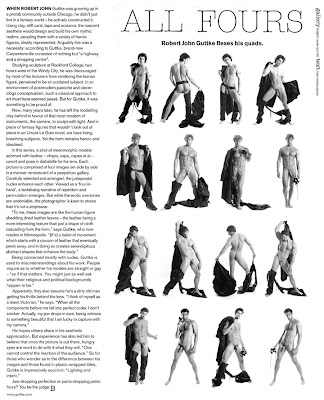 'These images are like the human figure shedding dried leather leaves-the leather being more interesting than just a drape of cloth cascading from the form.'
Robert John Guttke

Above: Aaron (see my previous post with Robert's work with Aaron HERE:)

One of the many cliches associated with gay men, is a love of leather. Leather is a material that not all men, not all bodies, can truly pull off. I have never worn leather myself, but when I see it worn well, it has the ability to sexually catapult the mind to wild and wonderful places. In many respects, leather has an almost retro feel. Although still popular, it harks back to a specific time and part of ones life. Blue Magazine, Australia's gay lifestyle magazine, also has a sort of retro feel. Featuring top photographers from around the world, Blue launched in February 1995 under the name (not only) Blue, later changing simply to Blue. Since 2007, the magazine has styled itself as Blue+. I could not find anything recent about the magazine which seems to have folded awhile ago.

In this 2003 Blue Magazine profile, one of my favorite artists, Robert J Guttke, uses the leather, and the leather cliche as a metaphor within the theme. The images touch on not only the material's overuse in gay culture, but also speaks to it's decline in popularity. In these images, leather drops from the body like dead leaves, a shedding of skin, a getting rid of the old and worn creating almost a rebirth or sorts. 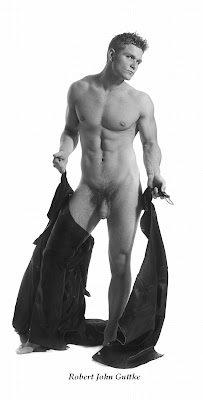 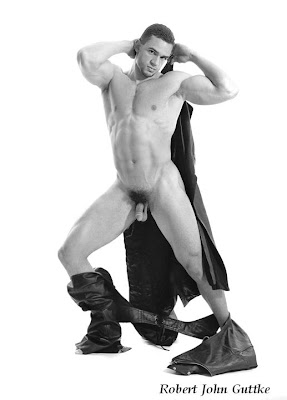 When Robert John Guttke was growing up in a prefab community outside Chicago, he didn’t just live in a fantasy world-he actively constructed it. Using clay, stiff card, tape and scissors, the nascent aesthetic would design and build his own mythic realms, peopling them with a variety of heroic figures, ideally represented. Arguably this was a necessity, according to Guttke, brand-new Carpentersville consisted of nothing but ‘a highway and a shopping center.’ 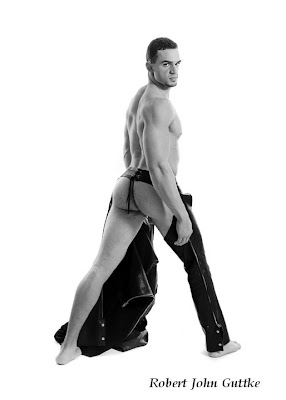 Studying sculpture at Rockford College, two hours west of the Windy City, he was discouraged by most of his lecturers from rendering the human figure, perceived to be an outdated subject. In an environment of post-modern pastiche and clever clogs conceptualism, such a classical approach to art must have seen passé. But for Guttke, it was something to be proud of.

Now, many years later, he has left the modeling clay behind in favour of that most modern of instruments, the camera, to sculpt with light. And in place of fantasy figures that wouldn’t look out of place in an Ursula Le Guin novel, we have a living, breathing subjects. Yet the form remains heroic and idealized. 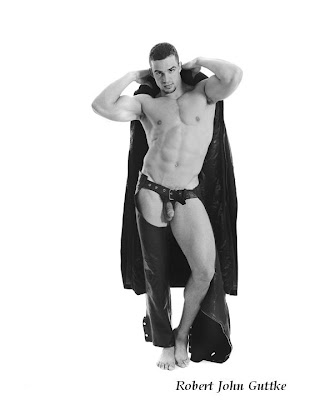 “To me, these images are like the human figure shedding dried leather leaves-the leather being more interesting than just a drape of cloth cascading from the form,” says Guttke who now resides in Minneapolis. “(It’s) a ballet of movement which starts with a cocoon of leather that eventually peels away, and in doing so creates serendipitous abstract shapes that enhance the body. 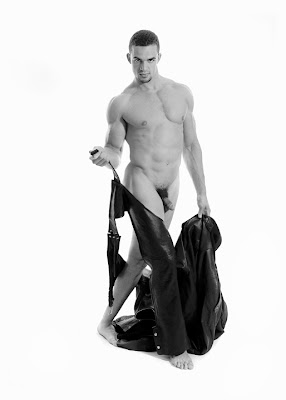 Being concerned mostly with nudes, Guttke is used to misunderstandings about his work. People inquire as to whether his models are straight or gay- ‘as if it matters. You might as well ask what their religious and political backgrounds happen to be.”

Apparently they also assume he’s a dirty old man getting his thrills behind the lens. “I think of myself as a latent Victorian”, he says. When all the components before me fall into perfect order, I don’t snicker. Actually, my jaw drops in awe, being witness to something beautiful that I am lucky to capture with my camera.” 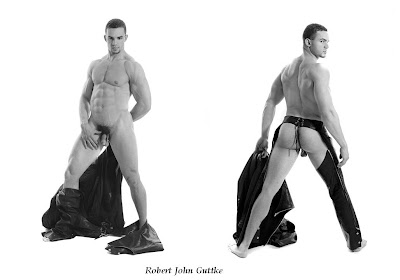 He hopes others share in his aesthetic appreciation. But experience has also led him to believe that once the picture is out there, hungry eyes want to do with it what they will. “One cannot control the reaction of the audience.” So for those who wonder as to the difference between his images and those found in plastic-wrapped titles, Guttke is impressively succinct. “Lighting and intent.”

Jaw dropping perfection of pants-dropping petits fours. You be the judge! 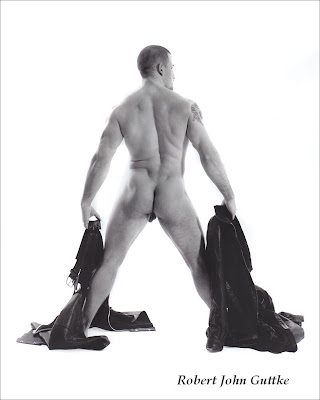