Send Away The Clowns: Bounce by Richard Rothstein 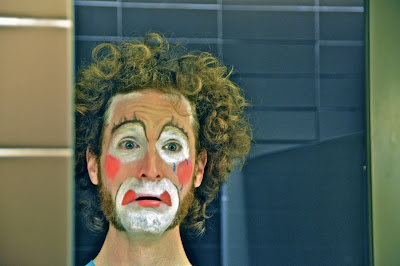 When I was 12 years old I was given the responsibility, for the first time, of taking my brother without an adult to the circus. It was a traveling circus, one of those that set up in mall parking lots for a few days. At 12, I loved the circus. The animals, the acrobats, the colors and mystery. Elephants, lions and mobile homes turned dotted parking spaces into a magical world I would stare at for hours after school. 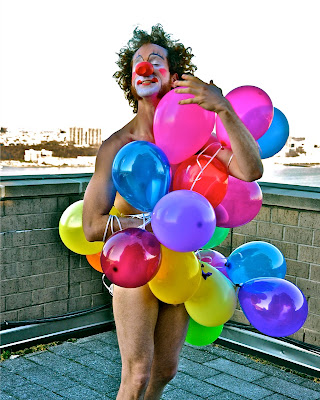 Soooo, my mother dropped my brother off and I off in front of the main tent, gave me strict instructions to watch my brother closely, and headed off into the mall to kill the hour or two until the show would be done. We had no money for food or souvenirs (I would have killed for one of those photo filled programs). Instead, we each had prepacked granola bars and grapes. Those grapes stick strongly in my memory as I felt the stares from all those around as with their cotton candy as we opened our zip lock sandwich bags stuffed with grapes. 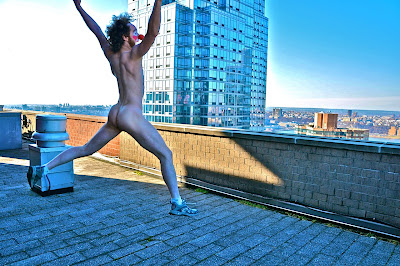 At intermission, my brother wanted to go to the bathroom. I should have smelled trouble looming right there and then. I ran along with him to the blue outhouses that lined the outside of the tent. As I waited for my brother to finish I kept my eyes firmly, not on his whereabouts, but on the camels and horses grazing oh so naturally on straw thrown on the pavement. 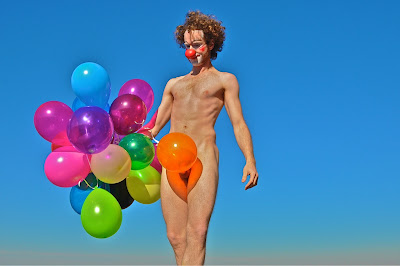 Well as the whistle blew for the show to continue, I had the realization I had left any thoughts of my brother for about the past 10 minutes and committed firmly to dreaming about what it would be like to join the circus. Panic set in quickly and strongly. I began calling is name, running between the outhouse line and the opening of the tent. After what seemed liked hours, but was really more like seconds, I decided I needed help. The piped in music was beginning and spotlight was starting to circle the inside of the main tent. I thought the best person, and safest, to seek assistance from would be the clown that was about to start act two of the show. I wasn't really paying attention so did not internalize he was about to go 'on'. Frightened and nervous, I walked towards him and weakly asked if he would announce that my brother was missing.

The next 5 seconds are permanently ingrained in my memory, and nightmares forever. The clown stared down at me, his painted on smile turned into twisted annoyance and in a voice I can only remember as evil the clown quietly but intensely said 'Get the Fuck back in your seat.' As he turned to face the audience I stood in shock for a few seconds before I slowly walked back to my seat. 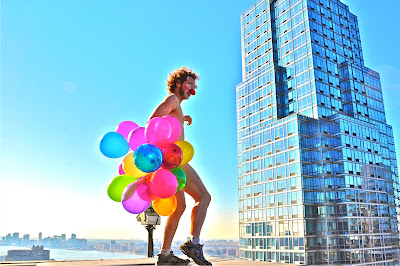 As I slunk back into my seat, the fact my brother was already sitting there waiting for me was of little consolation. A childhood fantasy had just been violently murdered. I was in shock for the rest of the day and days to follow. I can only compare it to finding out about Santa Clause. Yet another chunk of the magic that makes up being a kid was shot to hell. Life was forever just a little bit different and a little less special. 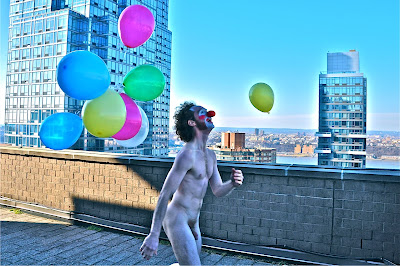 From this point on I have had issues with clowns. My coulrophobia crops up whenever I see a clown, in person, on tv or movies. Each time, the memory floods back. I of course have made the mistake of sharing this with may of my friends. It has led to clown related joke gifts at every holiday. Pop-up clown toys in my desk, clown related phone messages on my phone and 3 different gift DVD sets of IT. (which btw I LOVE).

When Richard Rothstein mentioned his clown shoot earlier this month, I again made the mistake of letting him know of my issues with clowns. Well Richard, like those clever friends of mine, decided to have some fun and began embedding shots of the clown he shot, Bounce, in the body of emails and sent them to me over the following couple of days. Of course he did not put any warning in the title so as I opened each e-mail I got to relive my childhood horror again and again. 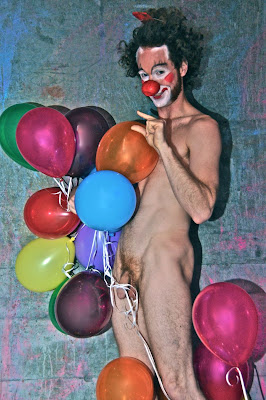 Now...I sort of hate to admit it but I have to thank Richard for his clown intervention. I would not go so far as to say that my coulrophobia is cured, but spending time with his images of Bounce have made it a little more tolerable. Bounce's intent is not to frighten but instead to bring smiles and pleasure to those he encounters, mostly as roams throughout New York City. There is a fascinating and erotic juxtaposition with a naked clown. The whole intent of 'clown' is usually to mask, hide and cover, something you might think being naked would make difficult. Bounce, within Richard's images, manages to maintain the mystery, even when wearing nothing but a balloon bouquet. 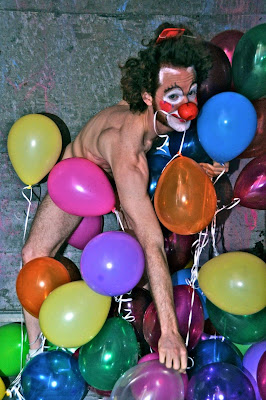 'I've always been fascinated by the intimate juxtaposition of the ridiculous and the sublime; and by that occasional moment during the heat of sex when you find yourself observing as well as participating and suddenly realize that absent the hormonal surge, the moment is truly ridiculous. The position you're in is truly silly and what you and your sex partner(s) are doing looks absurd. And you laugh; its when ridiculous meets sexual frenzy in one great big orgasm of silly. Hence, the naked erotic clown. We've all been there, whether you want to admit it or not. It's when an erect penis suddenly morphs into a rubber chicken.'
Richard Rothstein 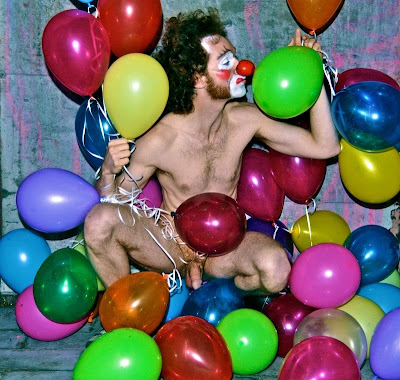 Check out more of Richard's work at Manhattan Men HERE:
Look for more Bounce, sans the clown make-up, on FH soon!
at January 17, 2012