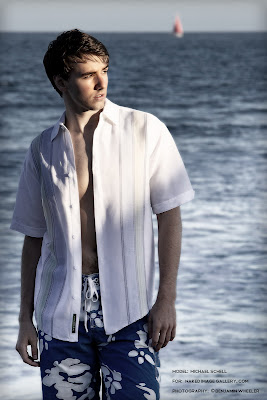 The images presented here actually depict shoots by photographer Benjamin Wheer at two California beaches. In the first part, model Michael Schell was captured last year in Malibu and in the last seven shots, John Zetterberg was photographed about 20 miles away on Hermosa Beach. 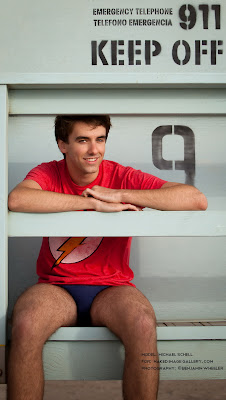 Whenever I begin a profile, one of the first things I do is research about the location, both where the photographer lives and shoots. Benjamin Wheeler hails from Sherman Oaks, a district of the San Fernando Valley in California. His studio, the incredible beaches that line the State's coast. In Spanish, Hermosa means beautiful or gorgeous and given that Hermosa was the setting for many of these shots (and the remainder, so close geographically) it felt a fitting title to showcase Benjamin's work. 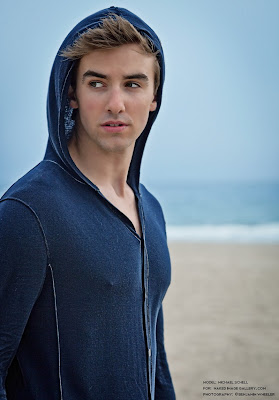 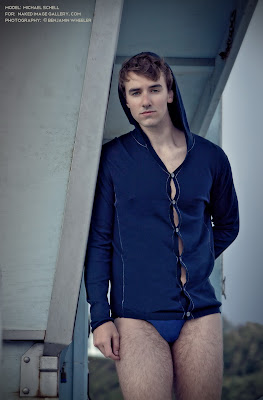 Image location is a theme I always love to explore. So often when profiling a photographer, the setting for the shoot, especially when working outside of a studio, can play a huge role in the effect an image can create. Intrinsic to my life is the ocean. I cannot imagine living anywhere that is more than a quick drive to the beach. I love being near the ocean in the summer, I love the ocean in the winter, I especially love it during storms. Living on the East Coast however means our beaches ability to invite us into it's waters is limited to about 40 or 50 days of the year. Swimming in the ocean where I live is usually reserved to running quickly into the water, diving in, then getting the hell out as fast as possible. 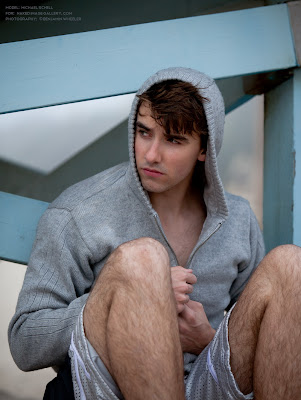 I have always fantasied about the beaches on the West coast. Although I have swam in tropical waters while visiting Florida and the Bahamas, there is a feel, a life style, and a spirit I associate with the beaches of California. I have never really surfed (except for wind surfing during a visit to Îles de la Madeleine) but growing up, through movies, television shows and books, I developed my own wonderful vision of what it must be like to live, breath, hear and feel the lifestyle of the California Coast. Now I am not really sure how close my vision is to reality, but when I spend time with Benjamin Wheeler's images, my vision is beautifully brought to life. 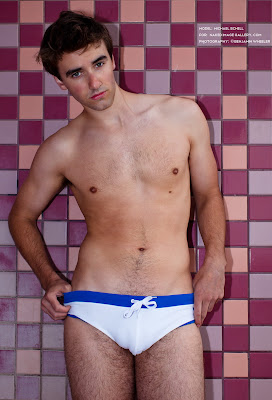 On Benjamin's website, subjects are often candidly shot, taken at a distance, with the intention of catching the subjects natural movement, body language and expression. his surfing section in particular captures that 'feel' I described above. 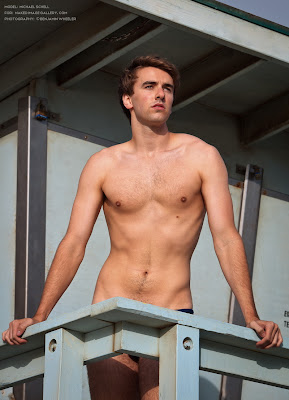 With a master's degree in social work, Benjamin says he is an observer of people by nature and tends to think of then as the compilation of all of their prior experiences. Given almost everything that we do is in some way based in trust and most importantly relationship, Benjamin's own experiences come together beautifully to aid and support the relationship between the artist and his work.

Working as a massage therapist for a few years has given him a comfortability working closely and intimately with the human body while at the same time, honoring others personal boundaries. His counselling experience helps him develop a rapport with the people he shoots, helping them to relax more quickly and respond naturally in front of his lens. Years of art collecting contribute greatly to all things visual, Benjamin's sense of composition and color. Time spent as a men's sexual health educator, helps the artist explore a models comfortableness with the sexualized elements of an image concept in a non-threatening manner. 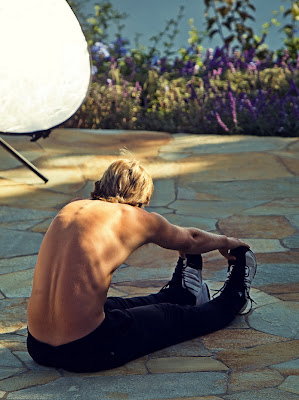 'My life has led me in many directions and it's interesting how many seemingly unrelated experiences contribute to my success as a photographer, relationships built on trust, openness and respect have unlimited possibilities.' 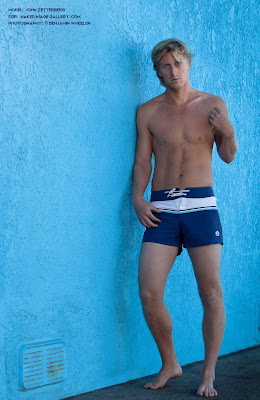 'For the most part my photography skills are self taught. Early on I photographed everything. Only over time did I narrow down my interests. I was privileged to take a work shop from Greg Gorman. Following the work shop I had the opportunity to assist him on a multi day shoot. I learned more from him in that week than in all my prior self study combined. And I learned that I really enjoyed working with models. It's exciting to find the best in someone and try to bring it out in an image. For me, my internal goal is always to "do justice" to the model in front of me. I want them to look at their completed image and say "Wow - I look really great." 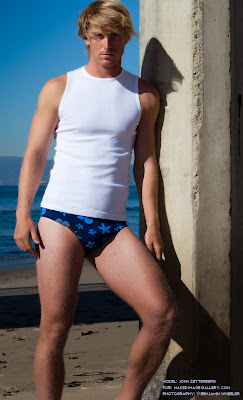 One model Benjamin's work certainly did justice to is is 25 year old John Zetterberg. I love John's look! John looks like there is no where he is more comfortable than when on a beach. John only began modeling this past October after a move to LA. When he first arrived, John lived out of his car for about a month until he found a place to live. John's first modeling photos were taken with his apple laptop and with those early shots, he got requests from local photographers to take pictures for various projects. Currently John works as a USPTA tennis pro in the Pacific Palisades. 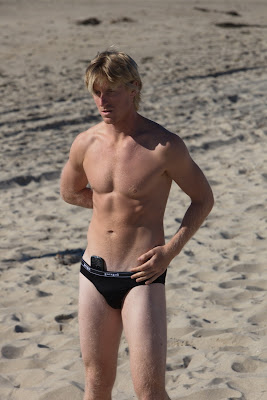 'Ben did these photos of me in Hermosa and I think he and I worked well together. We worked to create a medium between what he and I both thought could ignite the camera. I think we achieved success, especially with a blue background. I'm interested highly in a career in modeling and cannot wait to inherit the future. I've realized that I'm just a small particle in this universe and that realization pushes me even more to give it all I've got.'
John Zetterberg. 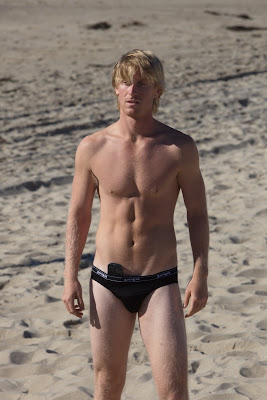 'I initially contacted John about shooting with him after seeing his online portfolio. I felt the images he had up simply did not do justice to him. He is in fantastic shape and I felt like he deserved some images which really showcased his amazing body and his California Beach boy looks. We've shot together several times and he always keeps me laughing. He has a great sense of humor and does not take himself too seriously. At one point, we were shooting below the pier on a relatively deserted beach when a woman walks by. John catches her checking him out over her shoulder. Being the only nearly naked model on the beach being photographed he knew he had the upper hand. He immediately calls her over and before two minutes are up he had a lunch date with her and we were back to shooting. I had to work hard not to laugh at the way he reeled her in. She walked away completely starry eyed and yes they had lunch together.'
Benjamin Wheeler 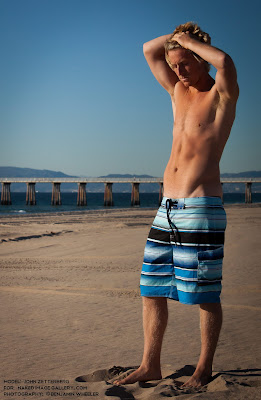 'All the models I have worked with have been amazing. I encourage them to communicate if their hesitant about anything or if a concept feels like it goes beyond their comfort zone. I think my background in social work helps. I have an incredible passion for photography. I'm constantly striving to take my work to the next level. I'm very excited to see what the next couple years will bring!'
Benjamin Wheeler 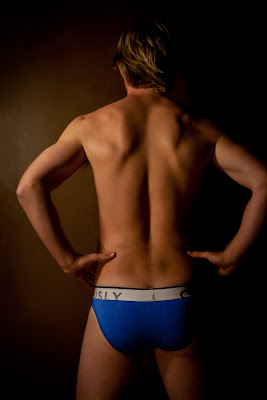