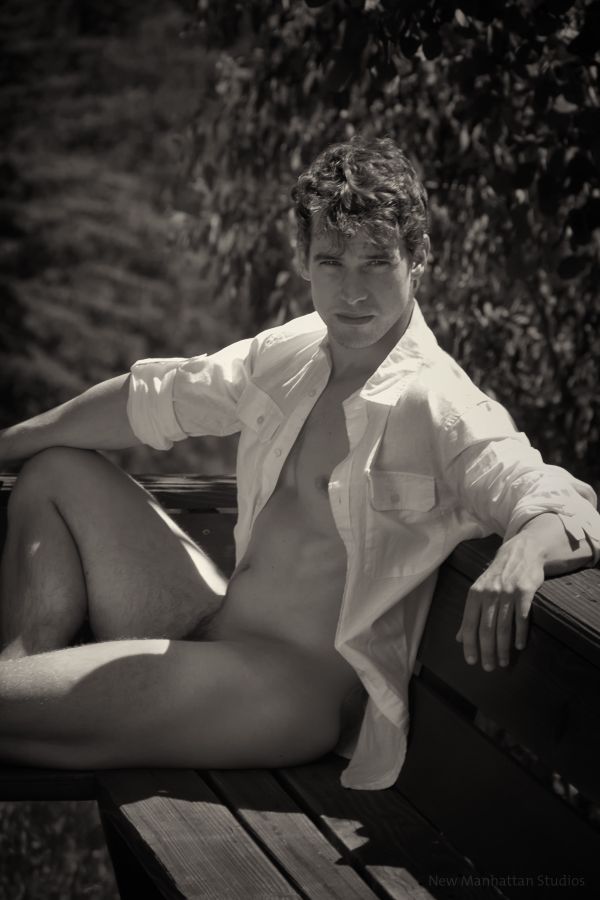 He had a hell of a week.  His boss overlooked him for a promotion he'd been promised.  A promotion he'd been working for, and counting on for the last six month.  His girlfriend  of close two years had got a promotion of her own.  One that had her having to move to another branch of her office in another State.  She informed last night,  that leaving the State, meant she was leaving him as well.. Maybe worst of of all, the AC in his building went out three days ago, right in the middle of the summer's steamiest stretch of whether. 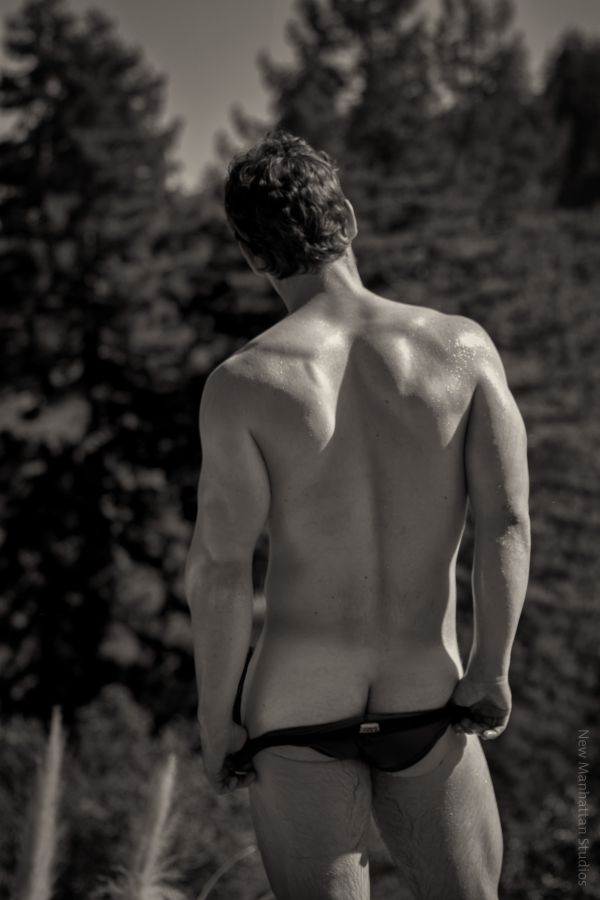 The only really good part of his morning, was the thought of the pool.  The pool wasn't his of course, it belonged to 'sort of' friend. That friend was away in Europe, and had left him a key to check on the house until his return at the end of the month.  As he sped onto the freeway, he hoped that the almost 40 minute drive might clear his head.  He was still however, angry, sad and pissed with the world when he arrived at the house.  After a bringing in the mail, feeding the fish in the fish tank and taking a brief look around the house, he down to the pool. 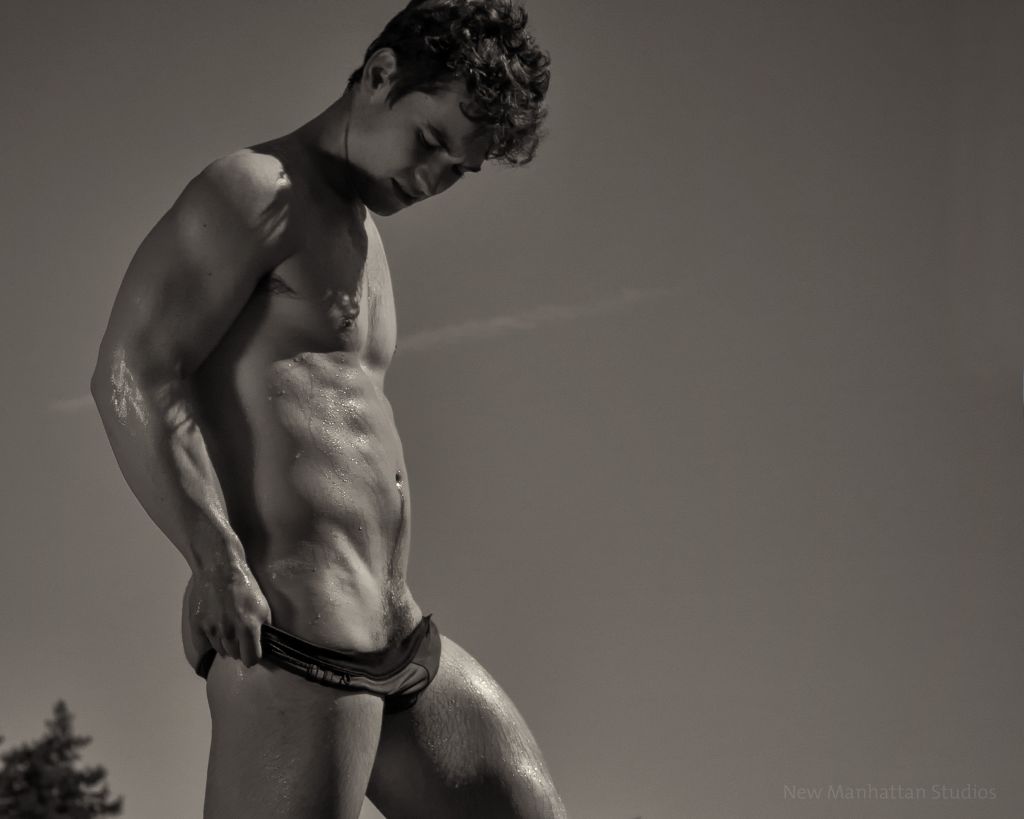 He stripped down to his undies before remembering there wasn't anyone in the house.  There wasn't another house actually, or really anyone within miles of the house. Off came the skivvies. Not that his being alone really mattered all that much. He had always kind of enjoyed being watched.  Had their actually been houses next door, neighbours with windows looking down over the pool, the undies likely would have come off anyway. 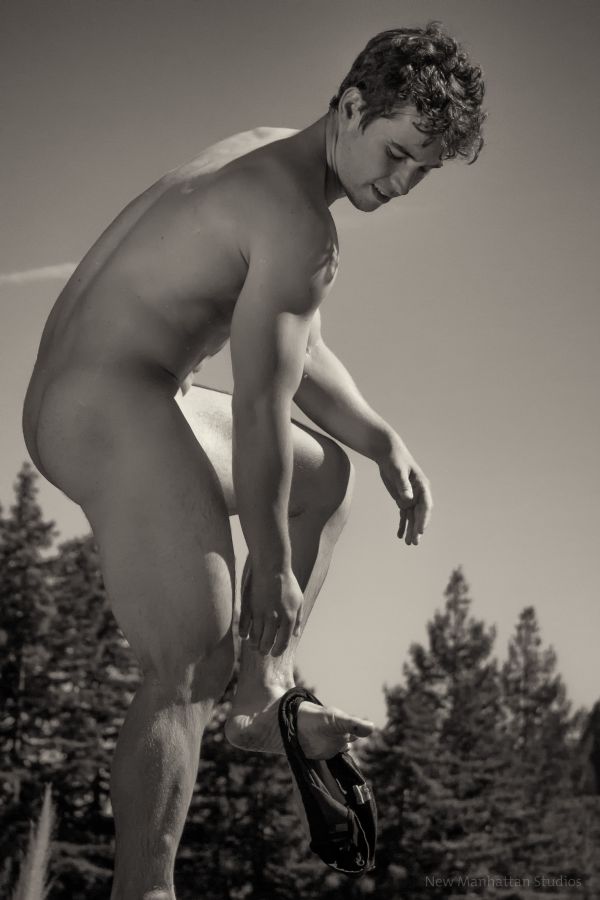 Sliding into the cool water brought only a brief reprieve from his heartache.  The water cooled the surface of his skin, but it couldn't penetrate the pain of the shitty last few days.  He sort of knew that his job had been going nowhere for awhile.  Losing the promotion, the promotion he had been promised, only confirmed what he'd already realized.  He was a nice guy, always willing to do what needed to be done.  This clearly had worked against him. They didn't want committed, passionate people, they wanted people who sucked up, did what they were told, and had no life or priorities, other than work.. 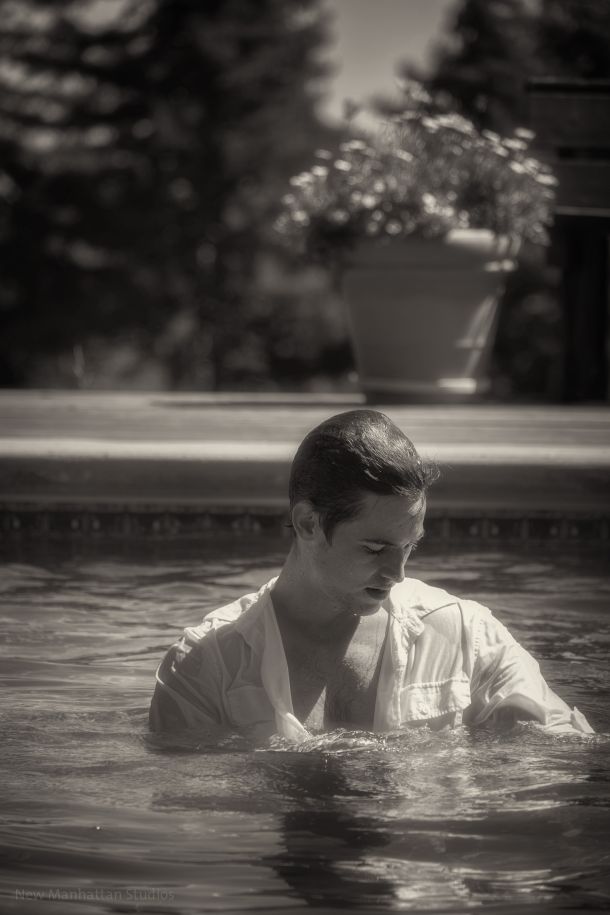 Her leaving wasn't so much a shock but her attitude surrounding it though definitely was.  They had talked hundreds of times about her work and the possibility of her having to move.   In every one of those conversations, the focus has been on how they would make it work.  The focused their discussion on how he would follow her in the future, and until then, they would work through a long distance relationship. 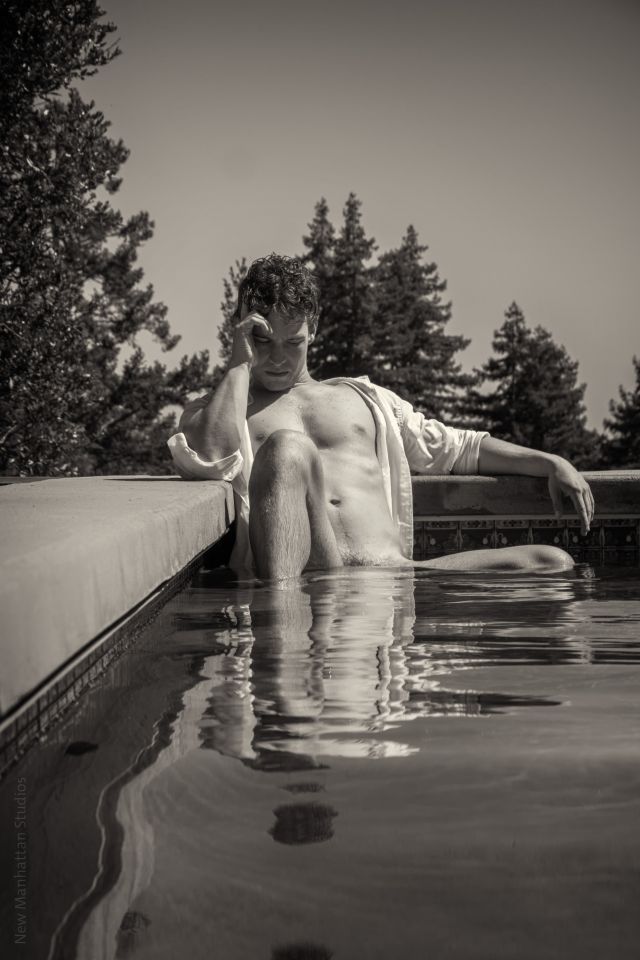 He went over and over all of their late night discussion and any possible signals that he might have missed.  He had given his all to this relationship and he couldn't for the life of him think of any hint that she wanted out.  She had given no signals the end was near, she quite simply had sucker punched him with a cold, brutal and abrupt break up. 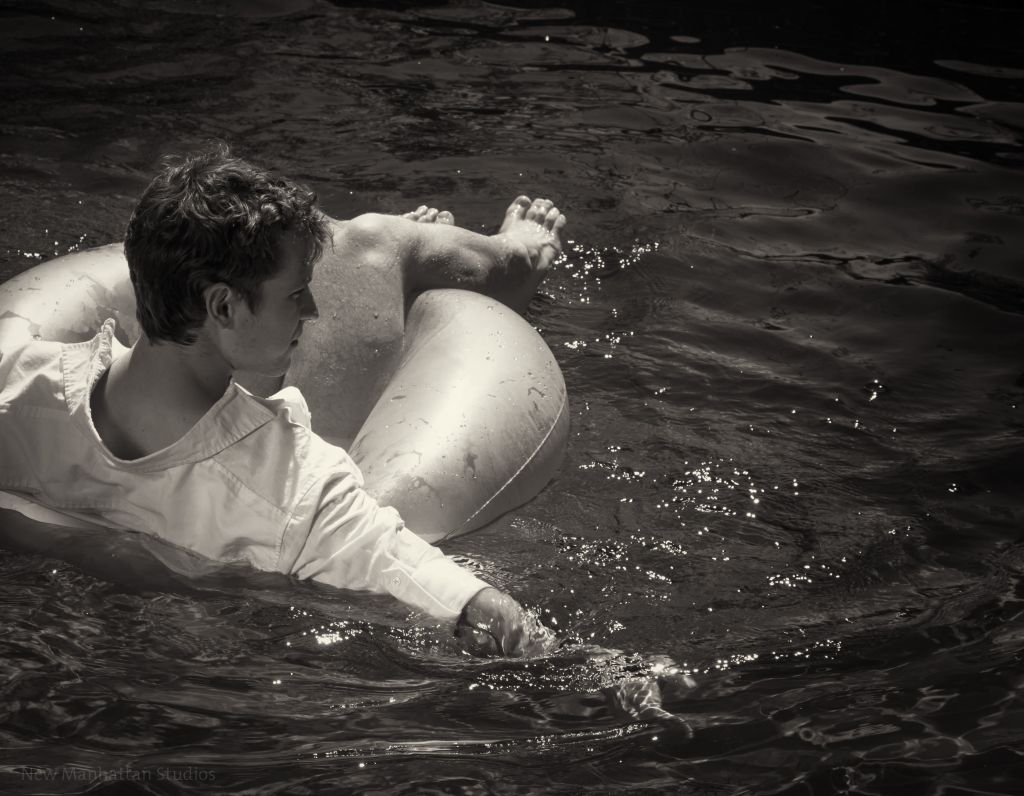 His hope that the pool,and the cool water might wash away some of his sadness and anger was fading.  If anything, being by himself in that house and alone in the pool, was only providing more of an opportunity for him to go over every shitty detail of the last few days.  He was ready to leave, take a quick shower to wash off the chlorine, some of his week, and get the hell out of there. 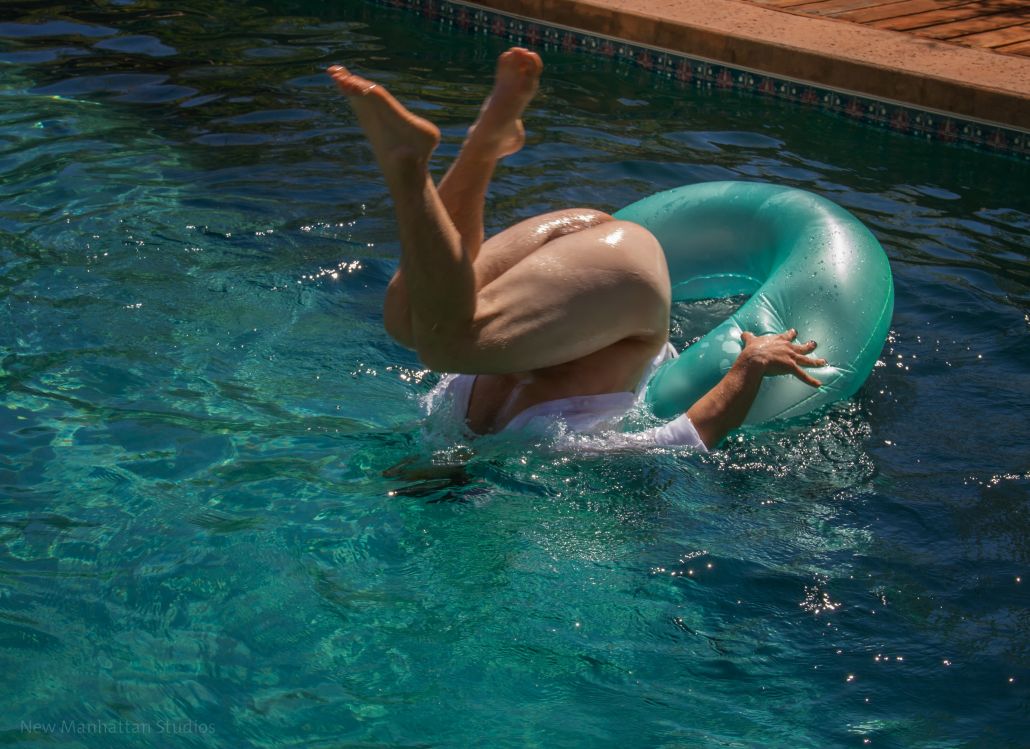 He flipped off the inner tube, and down under the surface of the water. As soon as his head was under water a strange sensation took over his body.  Looking up from below the surface, everything seemed a little off and distorted. He turned  around his body and swam underwater to the side of the pool.

When he surfaced, he was temporarily blinded by light pounding down from the sun.  When his eyes were finally able to focus, all he could see was her legs.  Long, strong and beautiful legs, standing over him on the edge of the pool.  As his vision began to clear, he could see more of her body and face.  She was not smiling however and her finger was placed in front of her lips signalling for him not to speak. 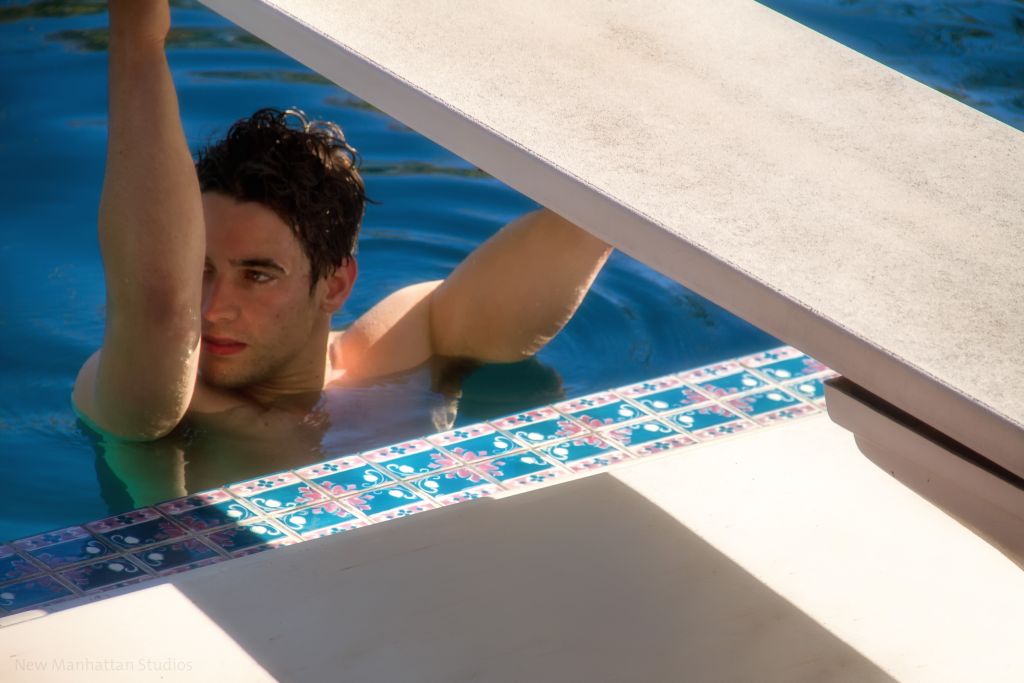 He was not prepared for the voice that came out of the beautiful blond's bright pink lips. Her voice was commanding, and not a voice you thought to argue with.  She asked, make that demanded, that he lay on the air mattress that she was pushing with her foot towards him.  Each time he started to speak or ask a question, she signalled and demanded that he remain perfectly quiet. 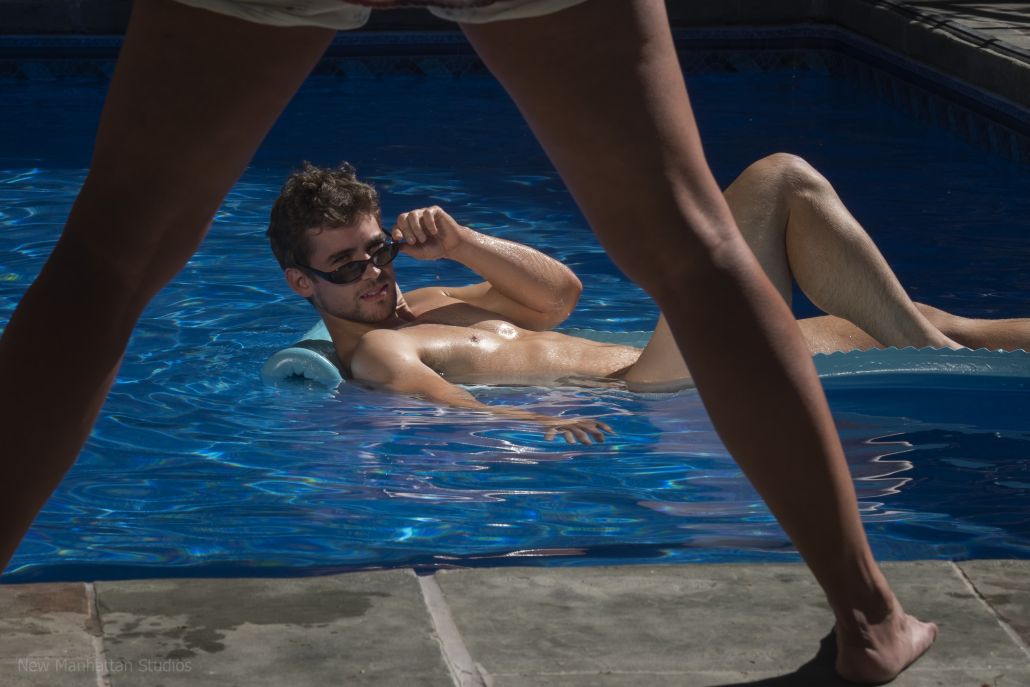 'I don't want you speak.  I just want to watch you, I want to own and visually devour every inch of your body with my eyes' 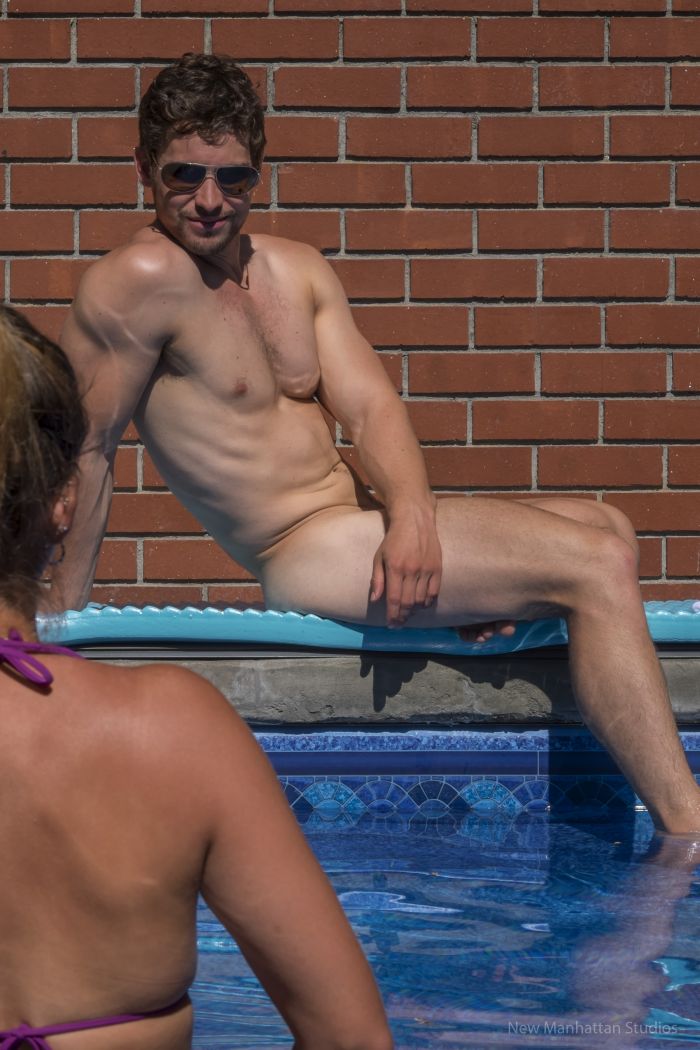 He had so many questions, but no complaints, nor any real desire to resist.  When she jumped into the pool he was briefly hopeful as to where things were headed.  She didn't move towards him however, instead, she ordered him up, and out of the water and onto the side of the pool.  She told him to lie down and remain there keeping his eyes directly looking into hers. 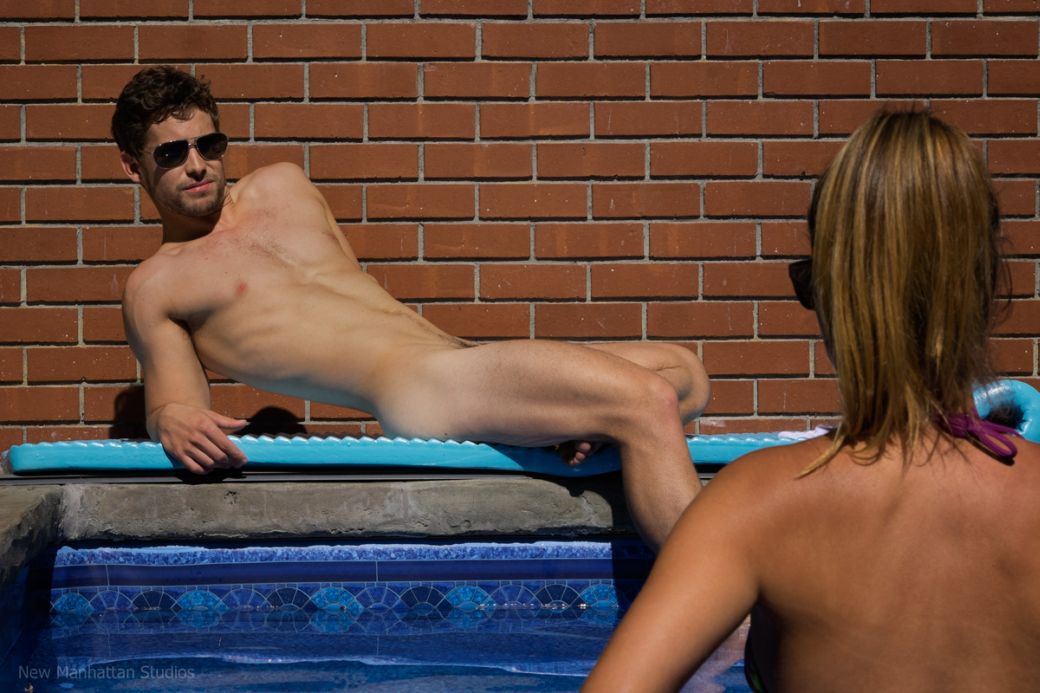 For the first time since she appeared he felt a slight hint of hesitation.  It wasn't she had on a bathing suit and that he was completely naked.  It wasn't that she was in charge.  It wasn't even that his body was pretty much fully alert.  The hesitation was about where this was heading.  He had initially assumed that sex was her end game, but her steely glare, and unrelenting stare, gave him the first signs that she had something different in mind. 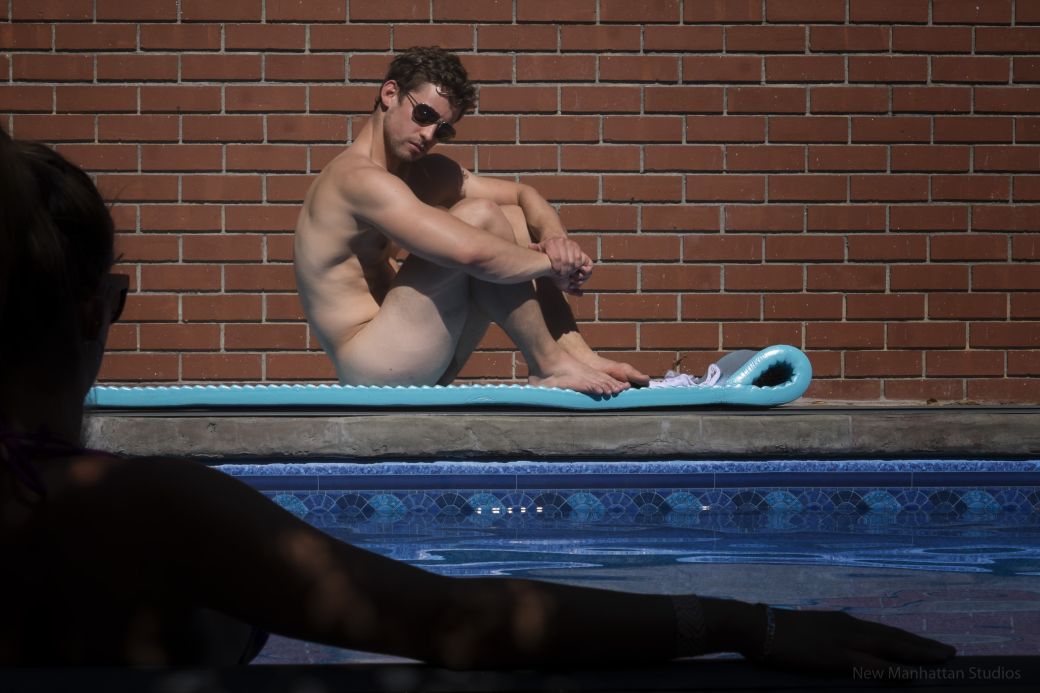 His alertness began to fade a bit and for the first time he felt a bit of embarrassment, and the compulsion to put his hand over his penis.  She ordered him to move his hands away but her demand, and her appeal.... were no longer having much of an impact.. 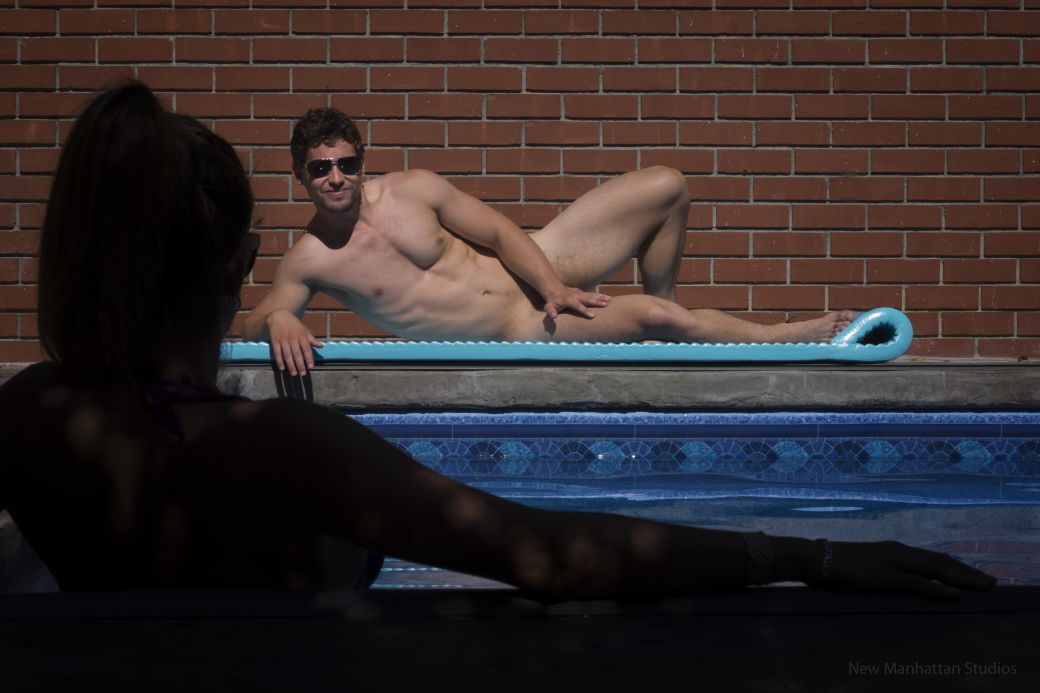 He got up and walked over to where his briefs lay.  She again attempted to give him an order, but this time the voice was softer, almost verging on sweet.  Her commanding demeanour began to fade and for the first time since her appearance, she smiled as she asked him for one last favor. He relaxed just a bit, and asked what exactly that final favor might be.... 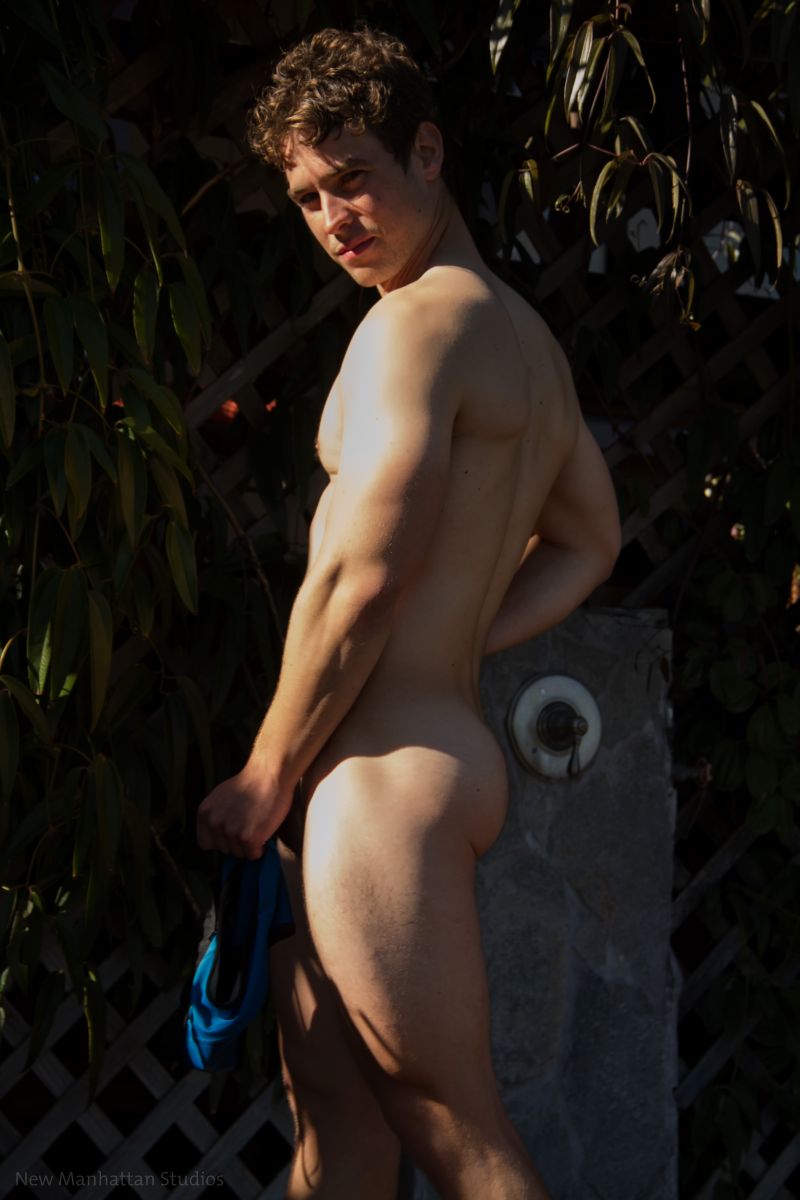 'Meet me in the pool'
She barely got out her invitation before he plunged into the deep en.. His hope of a happy ending again, returned. As he plunged under the surface, he could hear no other splash, nor could he see another body descend into the water to join him. He swam to the surface and was once again briefly blinded by the glare of the sun. He looked all around the pool area, but she was no where to be seen. 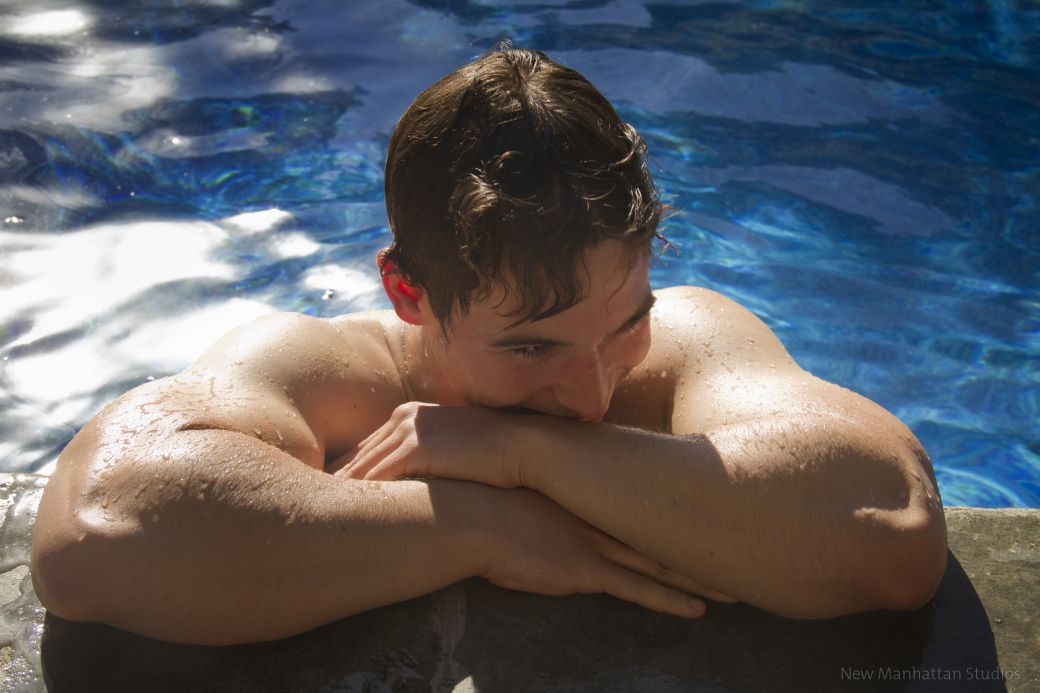 He got out of the pool and scanned the surrounding area and property.  She was not there, nor was there any sign of her ever being there at all. He knew that she couldn't possibly have gotten out of the pool area in the few seconds he was under water.  There weren't even any footprints from the two beautiful wet feet that had just been standing there.

He should have been shaken, even shocked but for him, it just didn't really matter.  Her appearance, whether real or imagined, had jolted a change in his feelings.  His ex, his job, his hot and humid apartment were now out of his head, and on their way to history.  He knew he wasn't heading back to that dead end job. and he wasn't going back to that apartment, at least not today.  For now, and maybe until the end of the month, he was staying right where he was, hoping maybe, for an afternoon encore. 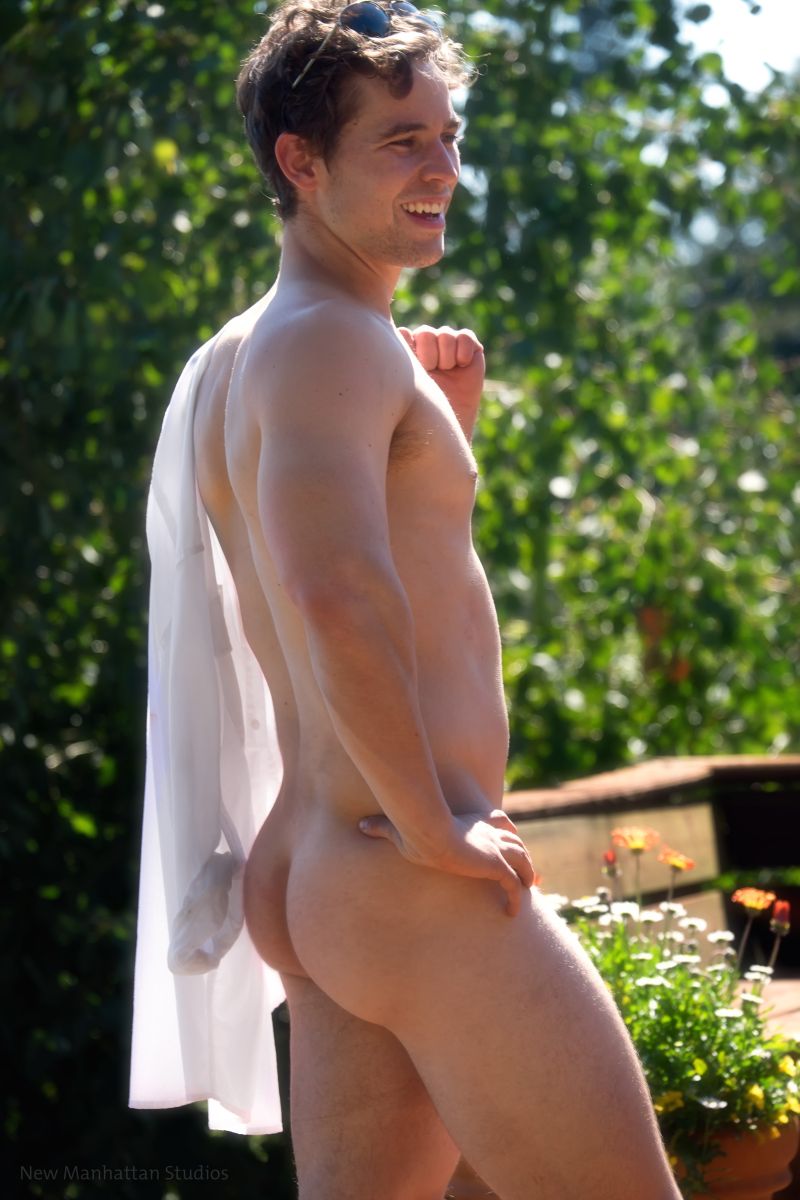