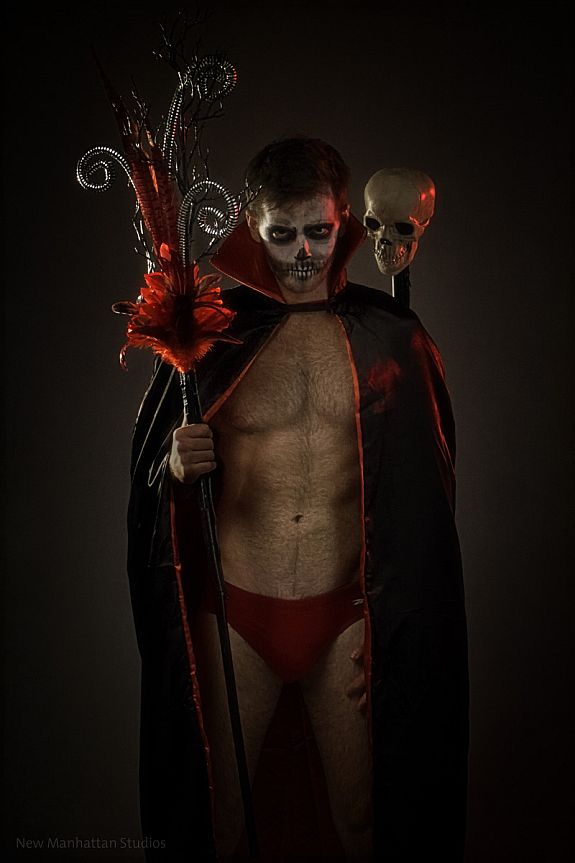 'After you've gobbled him down you'd be left alone to regret it while covered in blood and guts. That's the hunger of a ghoul. That's our destiny.'
Tokyo Ghoul 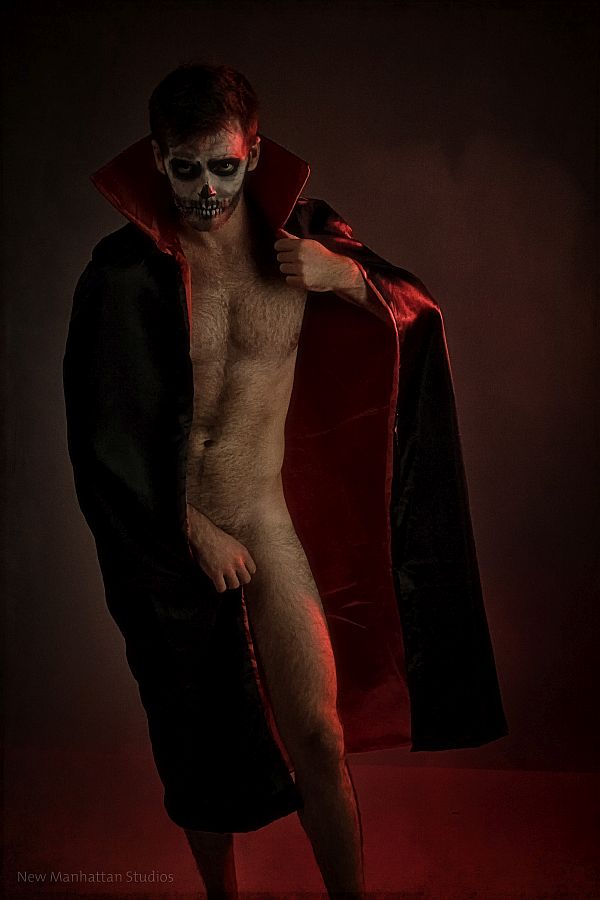 New Manhattan Studio's gorgeous ghouls mark several returns to the site. The studio's images have been featured each of the last three Halloweens, and I am hoping it is now a firmly planted tradition! behind the impressive make-up you may also recognize Ricardo, a model from NMS that I featured several times in the past. If you didn't recognize Ricardo's face, I am sure the site of his impressive body rang a bell or two... 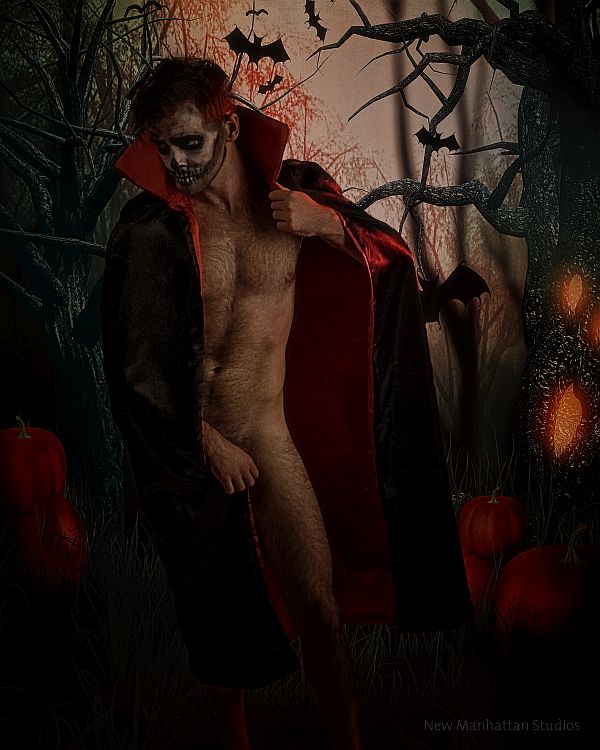 You may not recognize our first caped sexy beast, but behind the make up is model and actor Mason O'Sullivan, a model I featured several times between 2009 and 2011. When Wes first sent on some teasers from his Halloween shoot I barely recognized Mason, and it wasn't until Wes included his full name that it all came together! 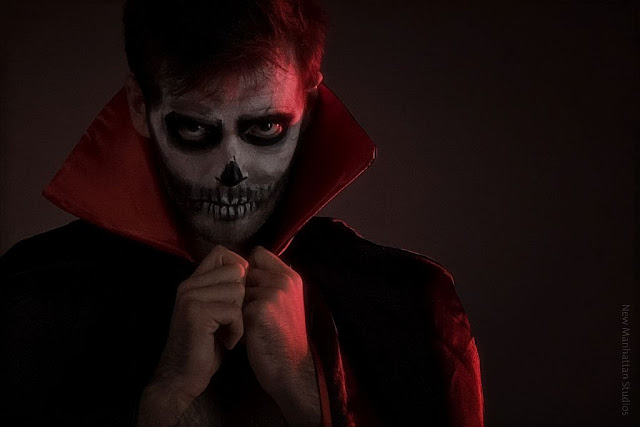 I have to thank Ricardo, Mason and especially Wes for getting together to shoot a Halloween themed shoot exclusively for readers of FH. Although the images may depict hot menacing models, I think it may have been Wes who went a little batty with my Halloween requests and fighting against his impulse to always shoot models looking their very best! Even with the capes, props and make-up, Ricardo and Mason remain two incredibly handsome little devils! 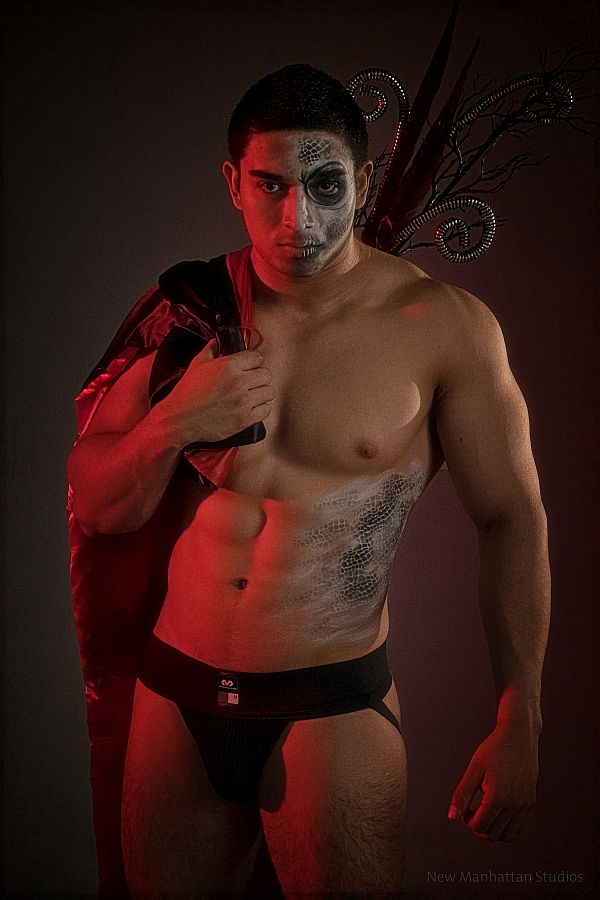 Halloween 2016
by Wes, New Manhattan Studios
The Halloween session was long-discussed and planned for weeks. In the end it was a roll-with-the-punches imrov session with a sense of serendipity that I carried over into the editing. Mason one of the models I worked with in Los Angeles last month, was in town and we planned to do a studio shoot to follow-up on the work we did in a stunning home in the Hollywood Hills. I asked him if he’d be up to some Halloween-themed fun for part of his New York City session and he was all in. 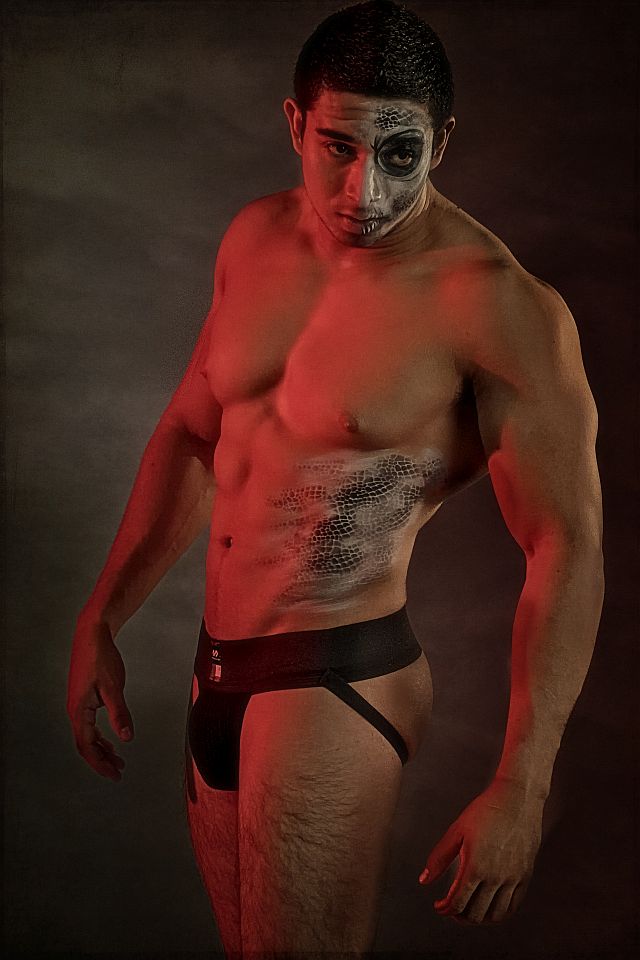 As a back-up, I had lined up Ricardo, the body-building brother of our studio assistant and second cameraman, Alex. Ultimately I decided to shoot both models and booked their sessions back-to-back. The biggest problem that I had was that said assistant, Alex, was out of town. I had already put Mason on notice that he might be pressed into service prepping and steaming his wardrobe before the shoot. At the last minute, a talented young lady, who’s both an aspiring photographer and a makeup artist, was referred to me. She was able to arrive midway into Mason’s session so I seized the opportunity to use her makeup skills to add some ghoulishly-themed face paint. 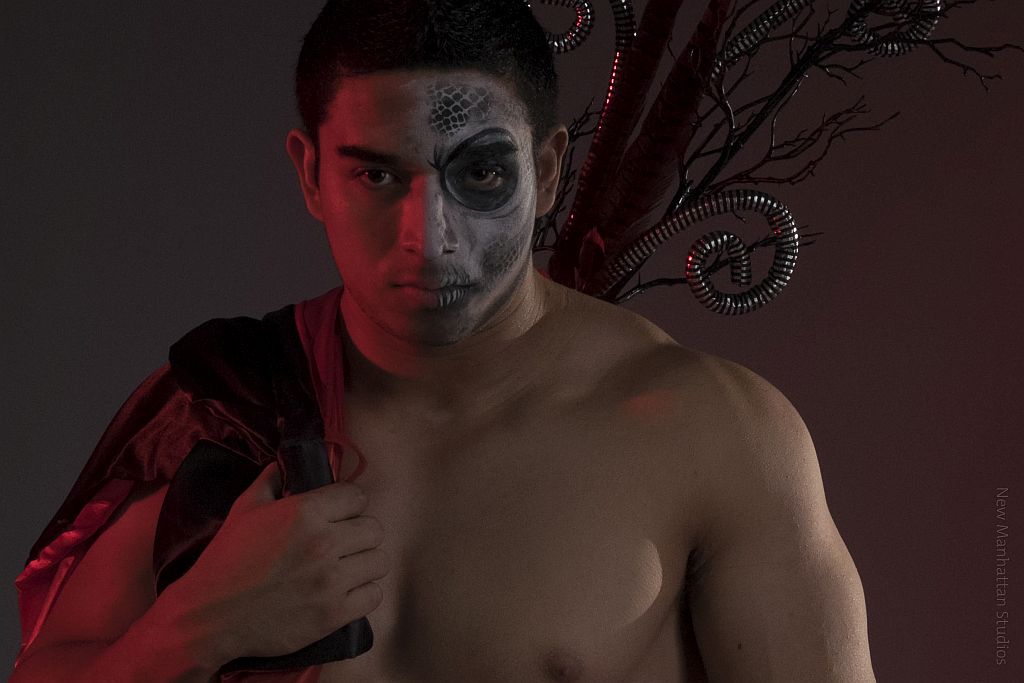 Thanks to Ricardo’s early arrival, in the end we wound up with a couple of models in the studio at the same time and an unexpected chance to shoot the two of them on the paper together. It was a fleeting opportunity that ended within minutes when the clock expired on Mason’s session and he was off for an evening in New York, heading to his old stomping grounds on the trendy Lower East Side. Squeezing what was essentially 3 sessions with 2 models into 4 hours, would have been challenging enough. But taking another half hour out of the schedule for each make-up session severely limited the amount of time for any one session. 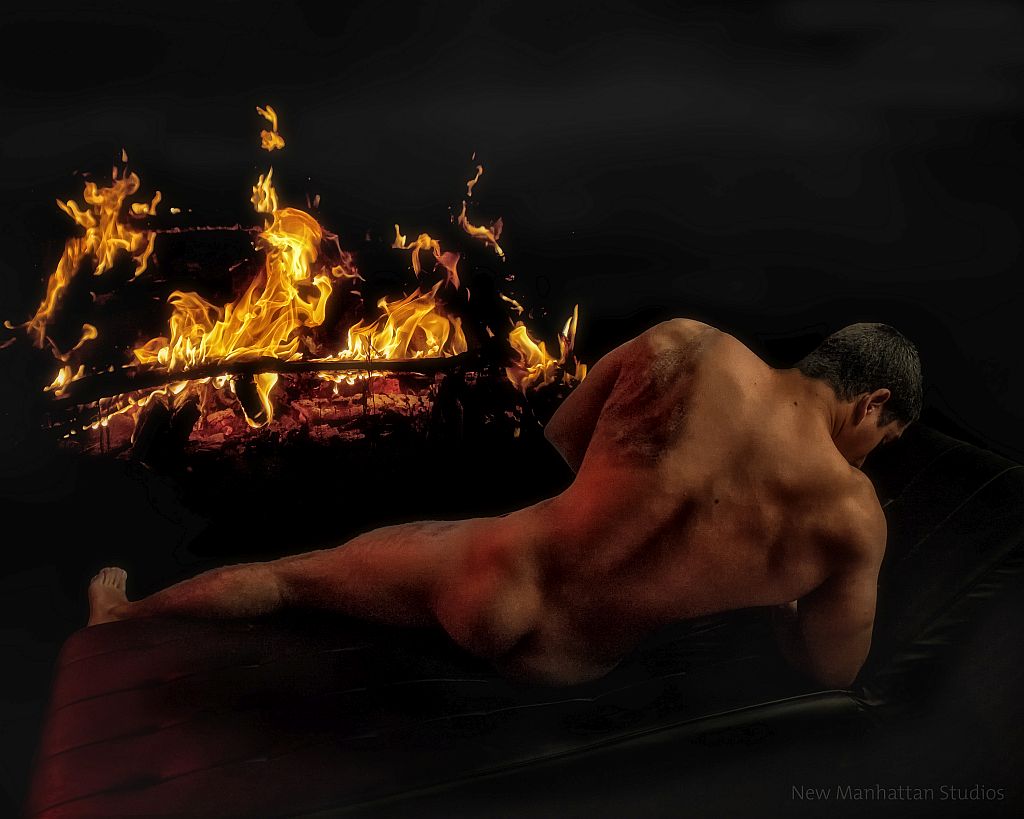 I was pleased that we were able to squeeze so much in, but I would have loved to have been able to work with the models to get something beyond the static set pieces that we had time to capture. I especially would have loved to have spent more time with the two models together but I am grateful that we had the six or seven minutes that allowed us to capture the handful of shots that we did. I am also grateful for the opportunity that this session provided for me to celebrate a red-letter date of the studio. Some of the photography that is now identified as early work for New Manhattan Studios was taken prior to 2011, but that Halloween was the day that I quit a previous job (and advertising career) to devote myself full-time to photography. It marked a return to my roots. I had started my career as a photojournalist and after years of commissioning, art-directing and supervising photography sessions, I intended to end my career by returning to the creative side of the camera. 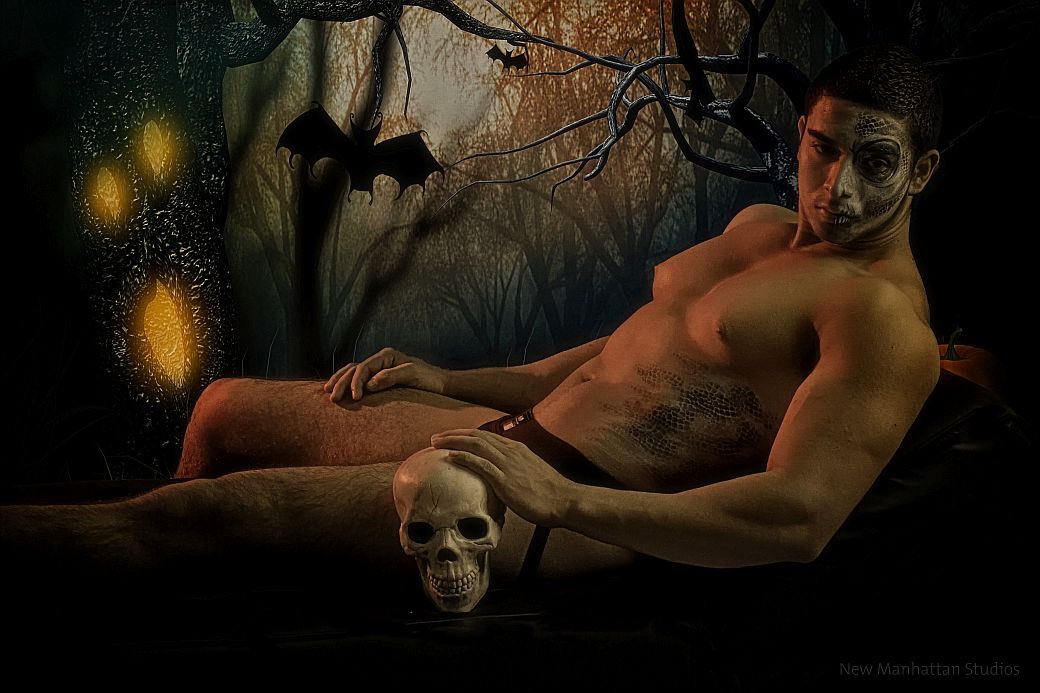 Within months of hanging out the corporate shingle, Tye found the studio online and over the past five years his interest and support has had an outsized influence on both New Manhattan Studios and its creative product. I value his judgement, opinion and friendship, so I find it sweet that we can celebrate the studio’s five year anniversary with a gift of a Halloween session to celebrate Favorite Hunk’s tenth anniversary. Good going, Tye! Let me add my thanks to the thousands and thousands of photographers, models and fans that love the site. We wish you many, many more years of hot and favorite hunks! 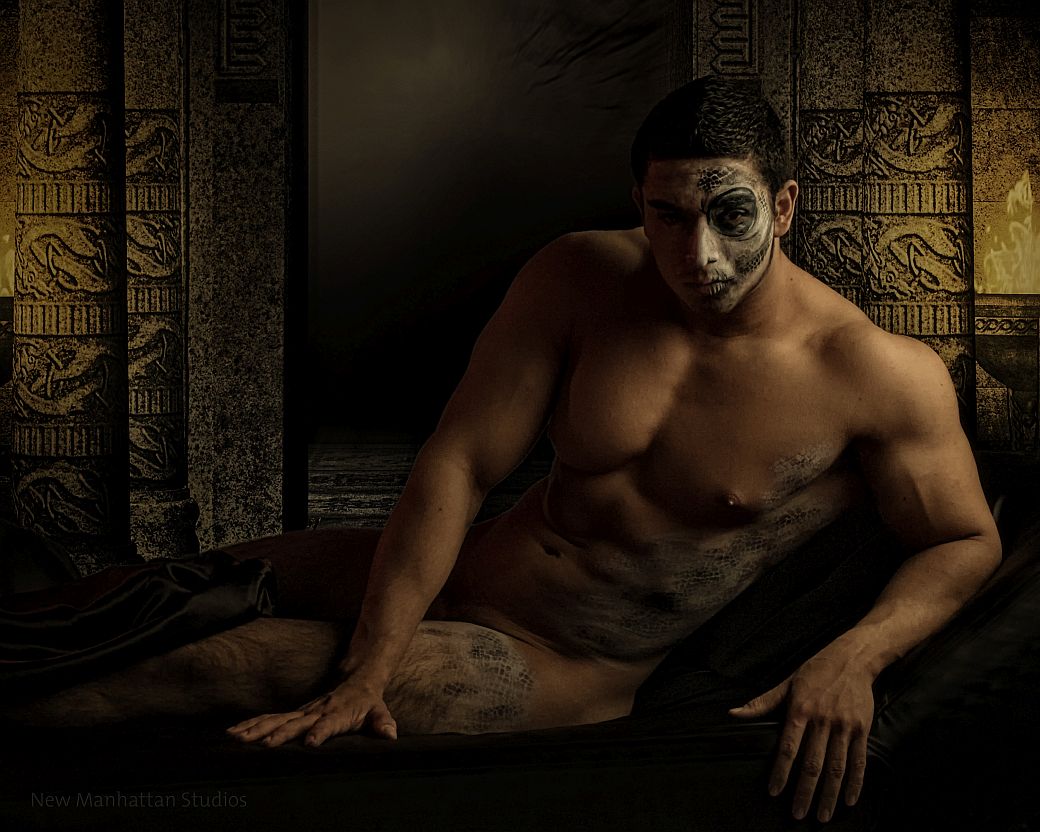 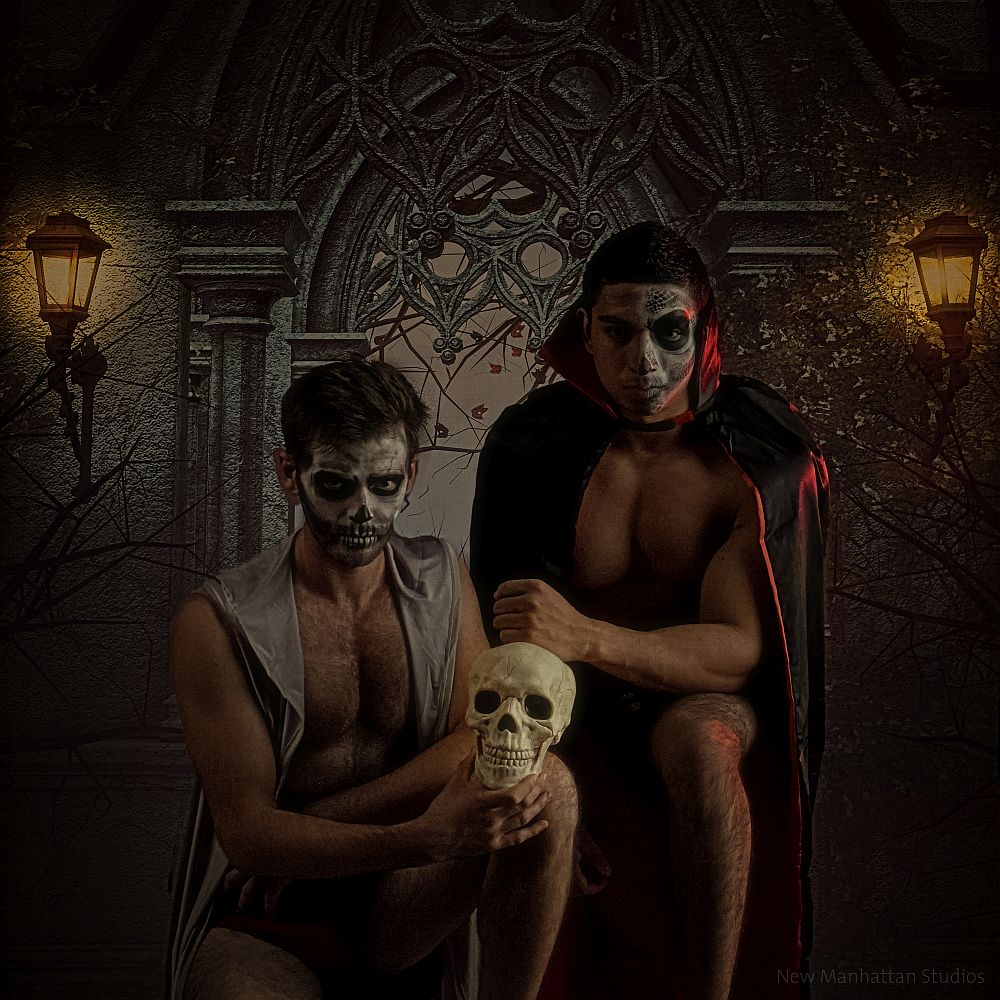