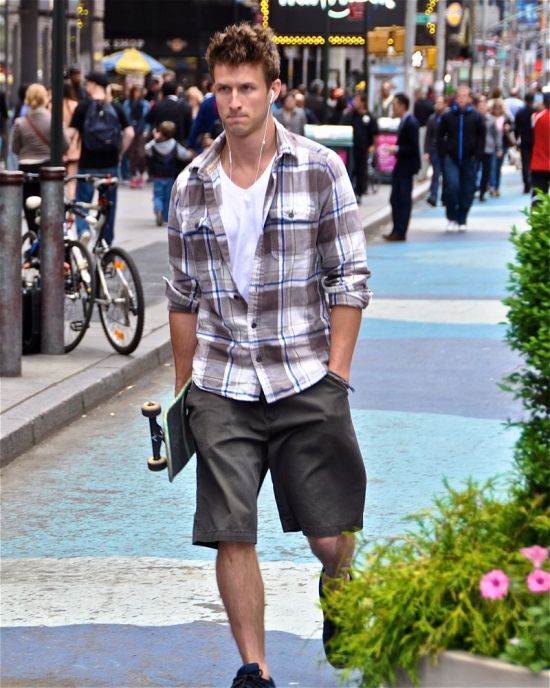 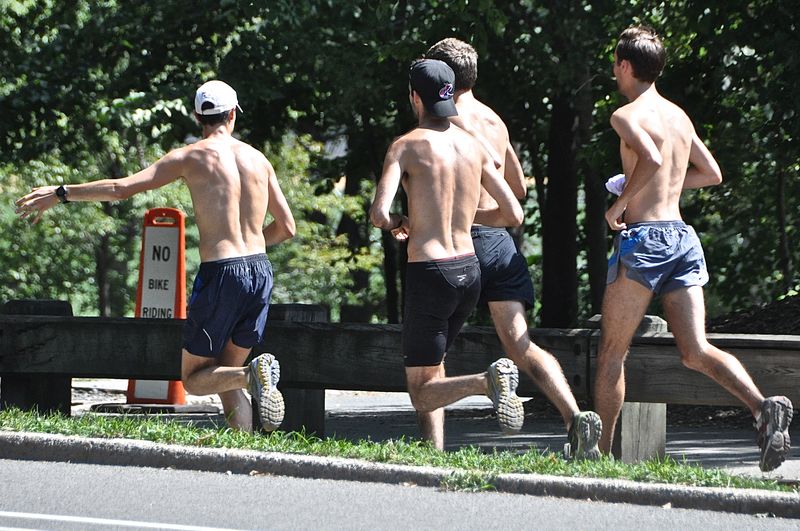 One of the other reason Richard's work is always such a joy to spend time comes from the artist's process and risk and magic that it entails. Most photographers, even those who shoot outside or on location create a work space. That space is usually one which they can control to a degree. A place where the photographer doesn't have to worry about spectators, interruptions and interference. It is usually also a place where the model can feel comfortable, safe to remove their clothing, expose their body and strike a pose. 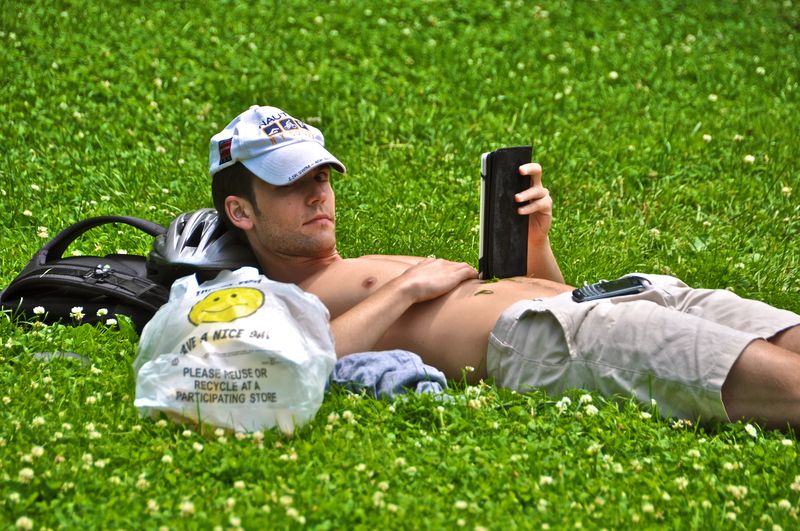 Those rules are mostly thrown out the window when working with Richard Rothstein. Richard's work is risky, exciting, spontaneous and most definitely in the moment. Richard's studio is New York City and when he heads out into the concrete jungle you can never really be sure what will happen, who you you might encounter and who in the end might get captured or shot. When on Safari, you might see Richard shooting the king of the jungle, Rob Eco, or....he might just turn and aim in your direction, putting you in the cross hair. 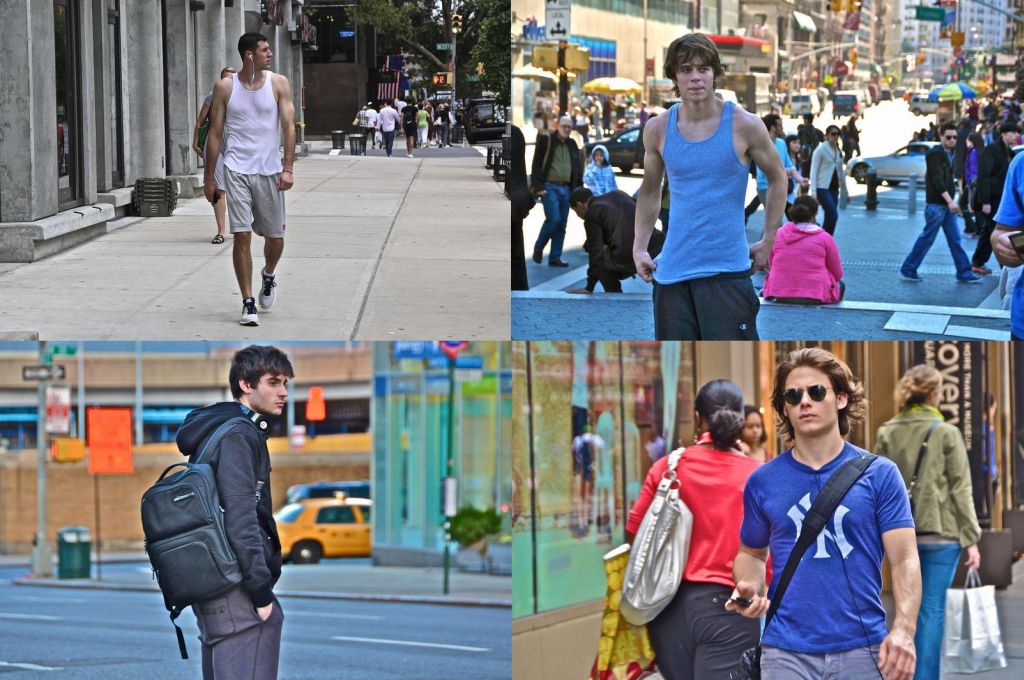 Some of my favorite images from Richard are some of the Manhattan men he has encountered in the jungle. Richard captures his targets just walking, maybe jogging, sitting, crossing the street, tying their shoes or talking on the phone. Richard's work, like his studio, is interactive, unavoidable on the streets of New York. If you're one of those streets while Richard is shooting... you just might become the prey, or at the very least, part of the hunt. 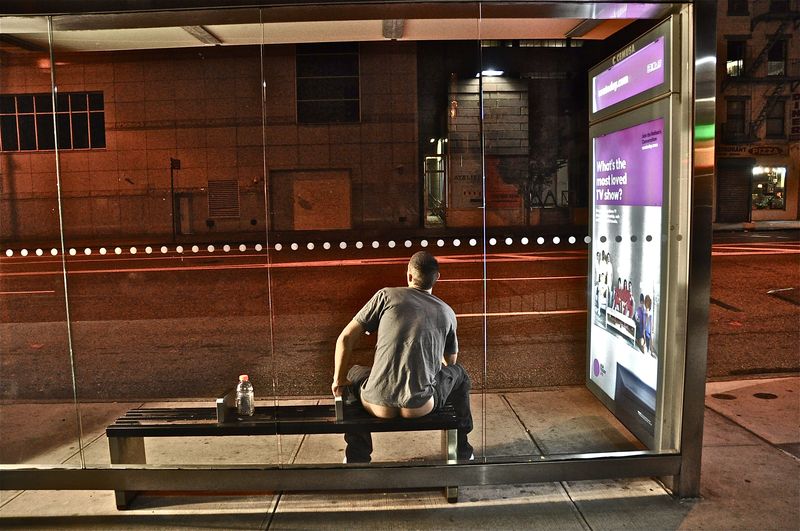 Thinking about his adventures in the jungle, I was curious to ask Richard about the many species of New Yorkers he must have encountered along the way. I know if I was to walk by Rob Eco in his loincloth, I would be stopping to get a better view! Without a studio, there are no changing rooms, no bathrooms, make-up tables, fans or electronic equipment. Models change in ally ways, behind street sights, use the wash rooms in deli's and coffee shops, get ready on benches and side walks and visual effects come from wind and the sun. Below, Richard answers my questions, indulges my curiosity and shares stories from his many safari's with the concrete jungle. 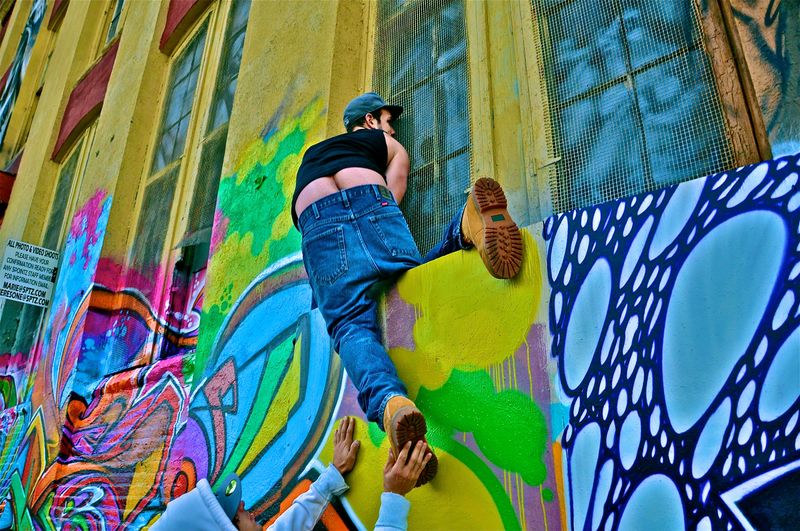 FH: Curious to the reactions of the non-models you shoot candidly while out and about in the city. Any stories of anyone really pissed? Upset? Thrilled? Wanting cash?

RR: 'In order to capture candids on men on the streets of New York, I’ve learned to shoot from the hip, literally. Sometimes from the chest, but rarely from the eye. Occasionally, I will engage someone and go “in your face” with the camera to see what kind of reaction I get. Reactions range from indifference to anger, and sometimes humor. The anger, however is rare but when someone glares at me and at my camera, I consider that a home run!' 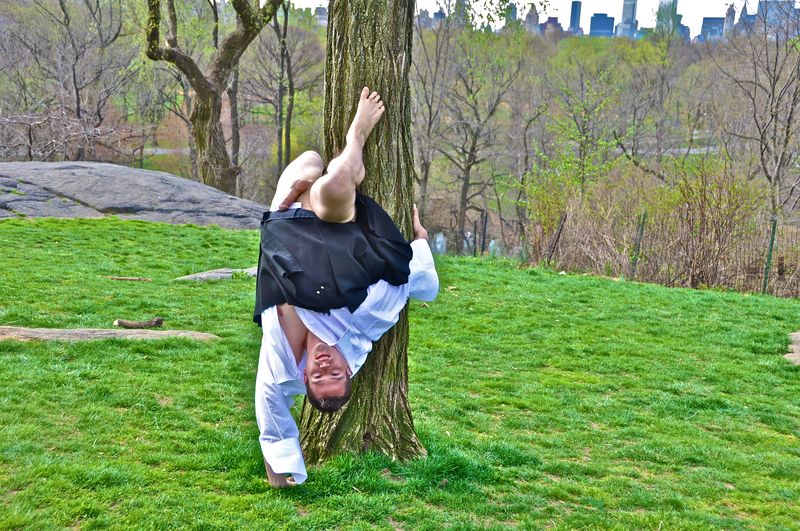 'Probably the most entertaining reaction was from a young man who saw his photographs on my Facebook page and emailed asking if I would do an erotic, full frontal s&m/leather photo shoot of him. He loved my work and hired me on the spot. In all the years, I’ve been doing this I’ve only been angrily encountered once. A young man on Houston Street went into a rage and demanded my memory card. I calmed him down and let him watch while I deleted his image. Of course, I always quickly and capture multiple images. He was too stupid to think of this, so I only had to delete one out of about 10 to get him off my back. OMG, I think I sound like an asshole!' 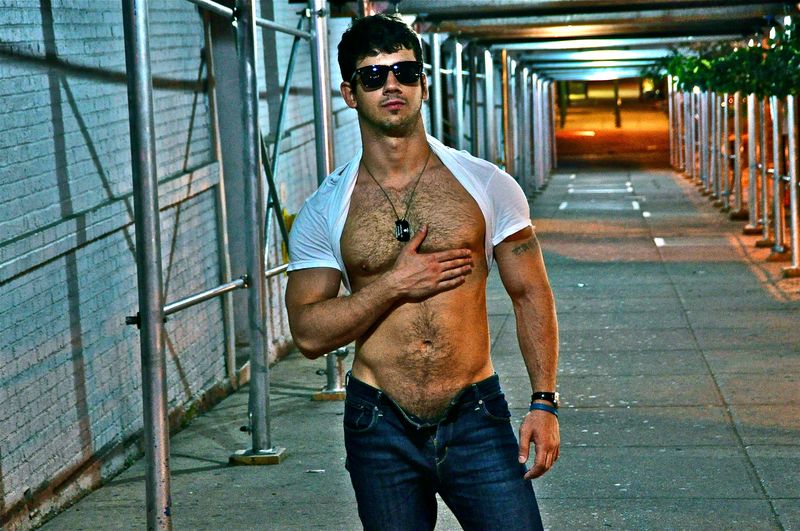 FH: Your work spans so much of Manhattan from well known popular settings, tourist favorites and nooks and cranny's only those in the know could find? What is the oddest place you have shot someone naked?

RR: 'Over the years I have walked almost every square inch of Manhattan, Brooklyn, Queens and the Bronx. Not so much Staten Island, but still quite a bit of it. Odd is not a word I think I understand. The only thing in life that strikes me as odd is censorship, fear of sexuality and cruelty. But those aren’t “places.” If by odd, you mean mostly not known to even other New Yorkers, I would have to say Step Streets in northern Manhattan and western Bronx. Before automobiles were common in the city, urban planners addressed very hilly and steep sections of the city by building staircases rather than roads. Today, 97 of these very steep and long staircases still exist but no one, even most New Yorkers, knows anything about them unless they live along them or near them. I’ve done a large series of semi-nudes (using dance straps) with professional dancers on about two dozen of these Step Streets.' 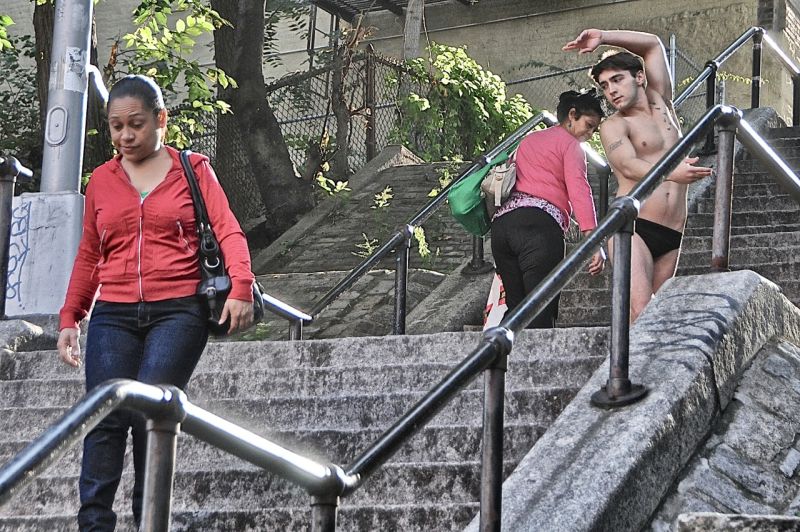 FH: What was the open setting for a nude shoot that had the most risk?

RR: 'In front of the Intrepid Air and Space museum and having Tarzan in his loin cloth climb the facade of the Metropolitan Museum of Art'. 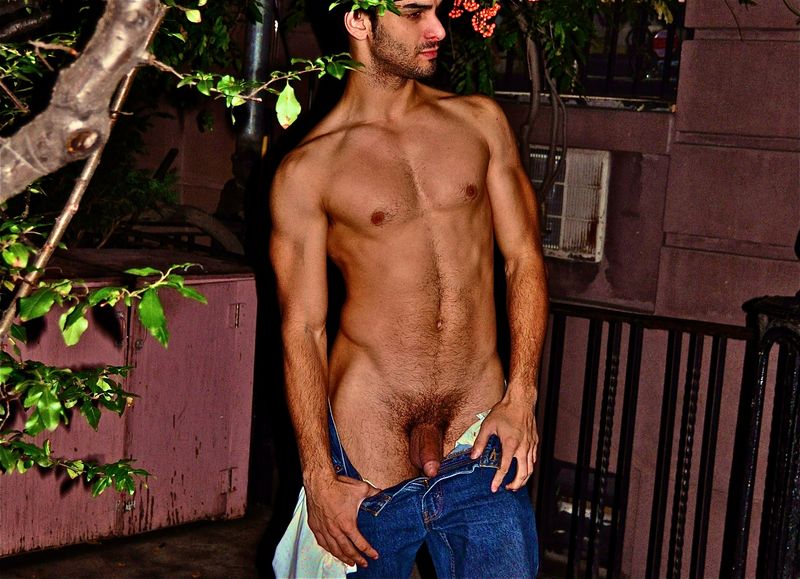 FH: How do you, and your models., react when someone decides to shoot...you... doing a shoot?

RR: 'Love that! And always put on a show for them. God knows how many iPhone videos and images there are around the world of me and my models! Drunks, tourists, and drag queens usually want to get involved in the shoot itself. We always accommodate.' 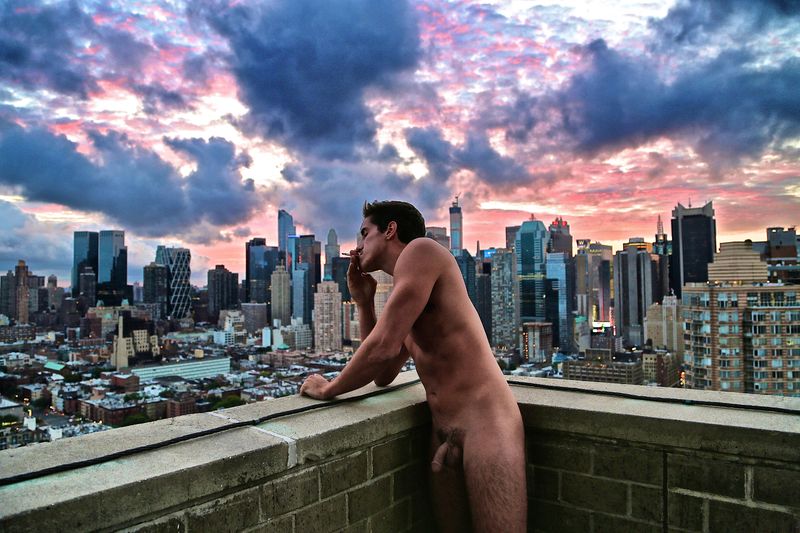 FH: You cover the city often very early in the morning, just before the sun, and city begins to rise. Is there anything particular about the people out on the streets at that time of the morning?

RR: 'It’s the only time the city that never sleeps at least partly naps. It’s a very quiet and peaceful time, a time of extraordinary beauty, mystery and calm. The few people who are out at those hours share those feelings and pretty much stay to themselves. The only exceptions to this rule are young women falling out of bars after last call (4 am) hoping to score with one of my models and demanding to photographed with a naked man on the city streets.' 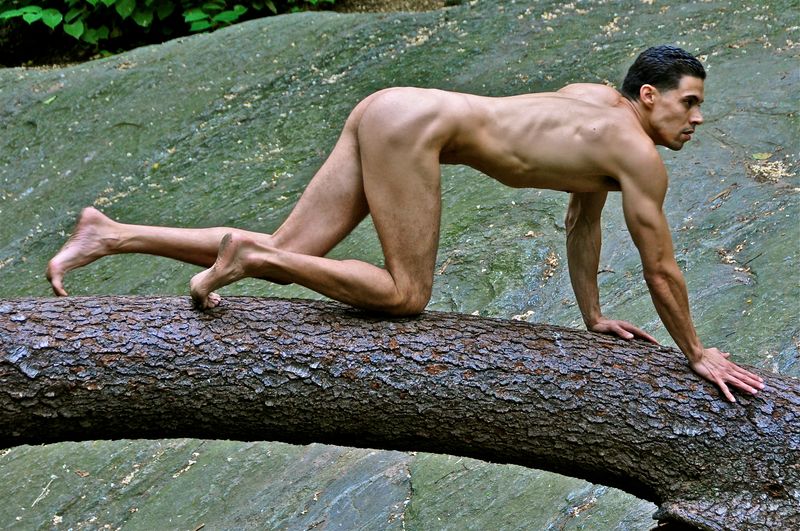 FH: I am sure models are changing behind tree's, in alley's or pizza shop bathrooms? Any strange encounters with looky loo's while a model prepares for a shoot?

RR: 'What the hell is a “looky loo?” And my models actually strip in public, it’s part of the process. I usually have an assistant who holds the clothing while I shoot, or we just throw the pants, etc. to the side so that it’s easy to grab is we get in trouble. :)' 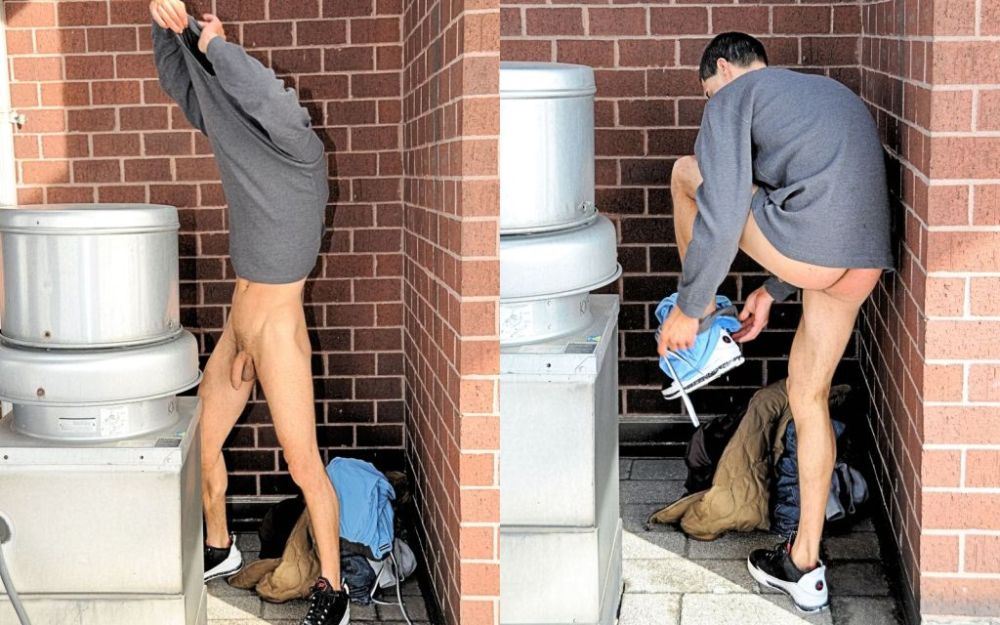 lookyloo
-People who go out of their way to look at people or something often causing crowds and more disruption.
-People who enjoy staring at watching other peoples misfortune. Oftentimes car onlookers to car accidents. 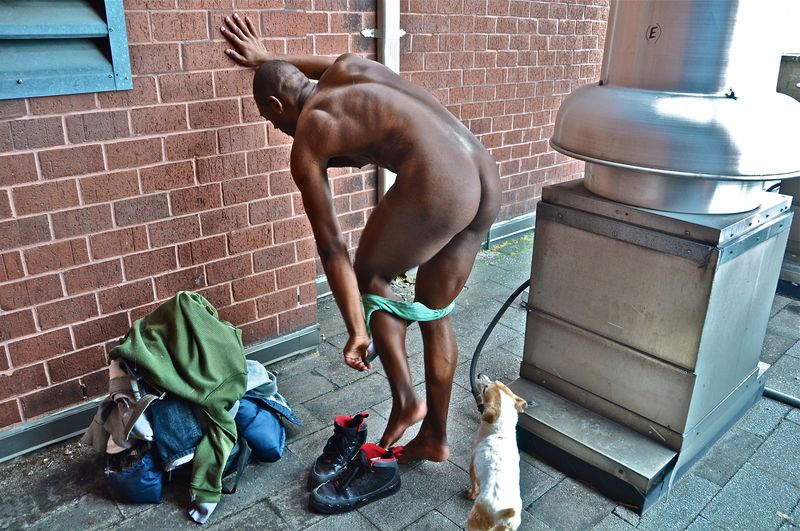 FH: Have you ever worked with any model who gets 'shy' shooting in the great outdoors? 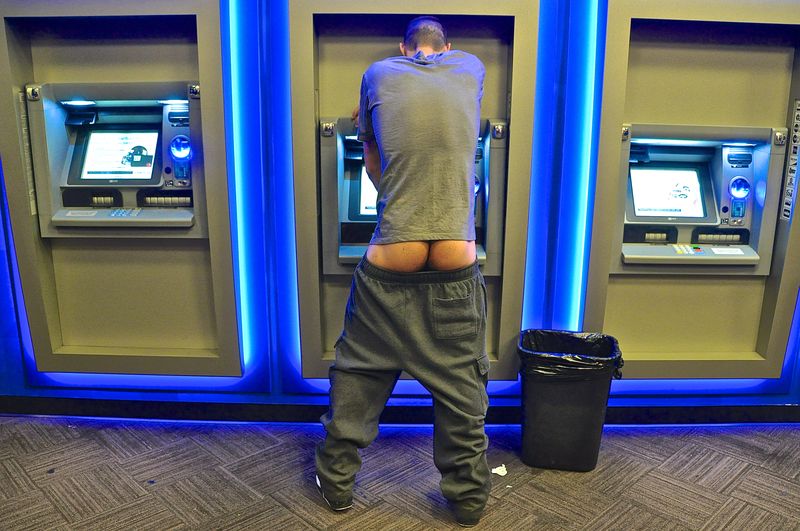 FH: Although models are key to so many of your images, the city seems to always remain at the core, is there anywhere in the city you have yet to, or have not been able to shoot yet?

RR: 'The top of the Empire State Building and inside a major department store like Saks, Macy’s or Bergdorff. I keep trying to get permission, but so far no.' 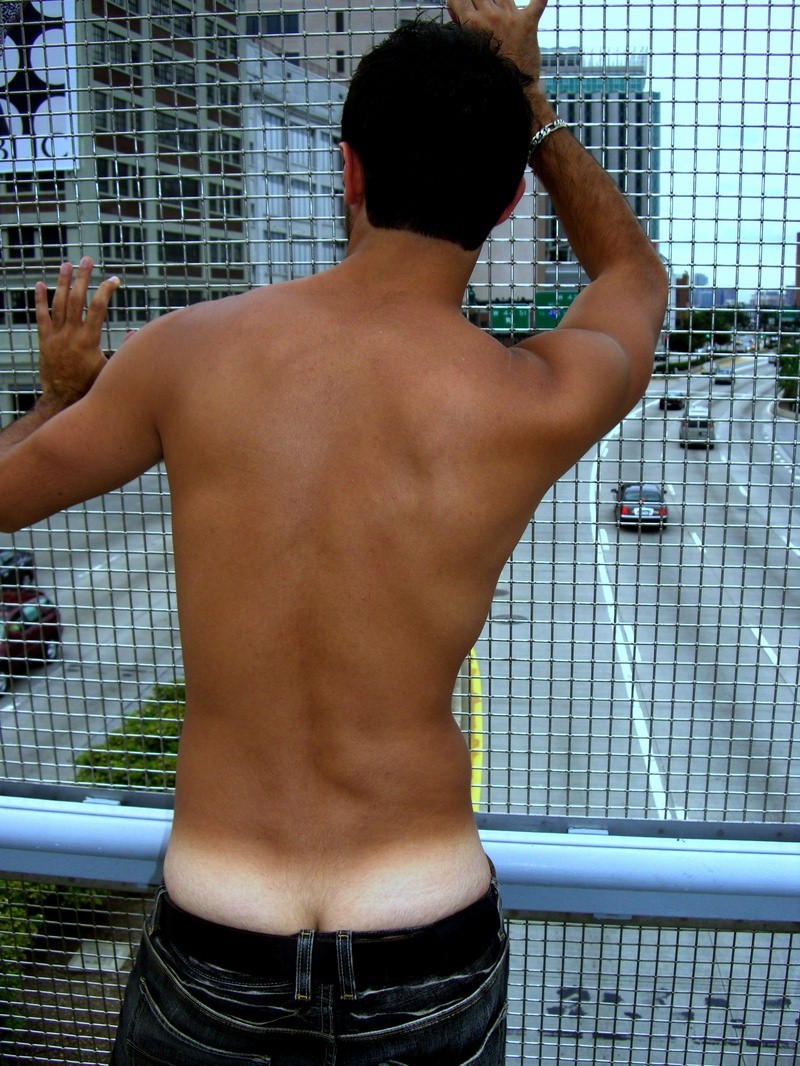 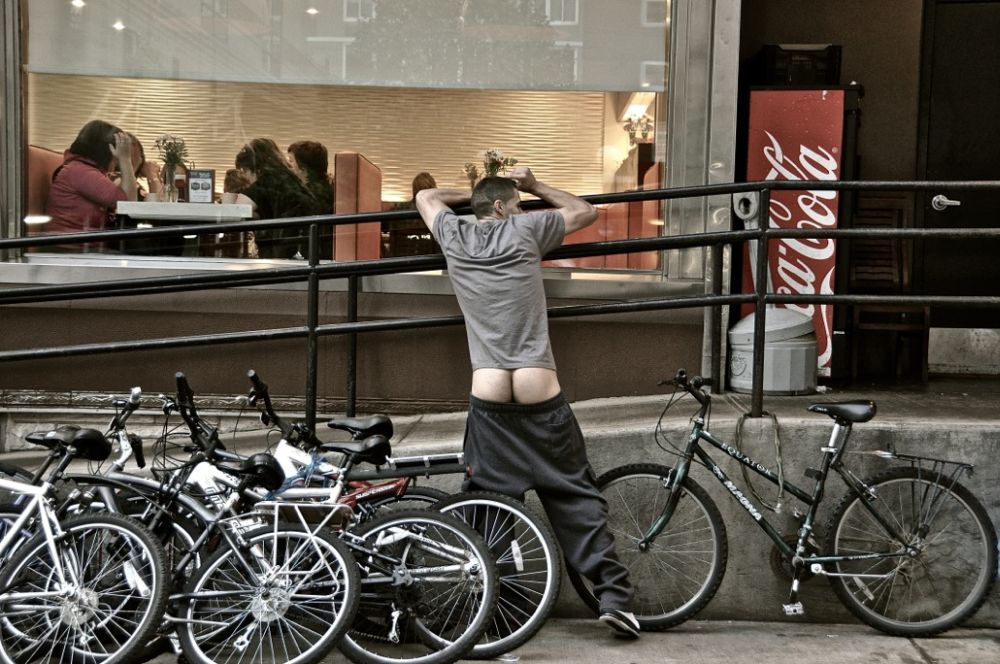 FH: Ever had issues with the police?

RR: 'Twice. One time I was shooting a fully nude model in front of an outdoor cafe at the Standard Hotel in the Meatpacking District. It was 4 am, no one was around, but then suddenly a patrol car pulled over. But this is New York City; we play by different rules. Looking at me and the full frontal naked model, the officer told us we were shooting on private property and to please move about 10 feet down the street. We moved. The cop car sped away.'

Below: The shoot, and model from the Meatpacking District shoot. 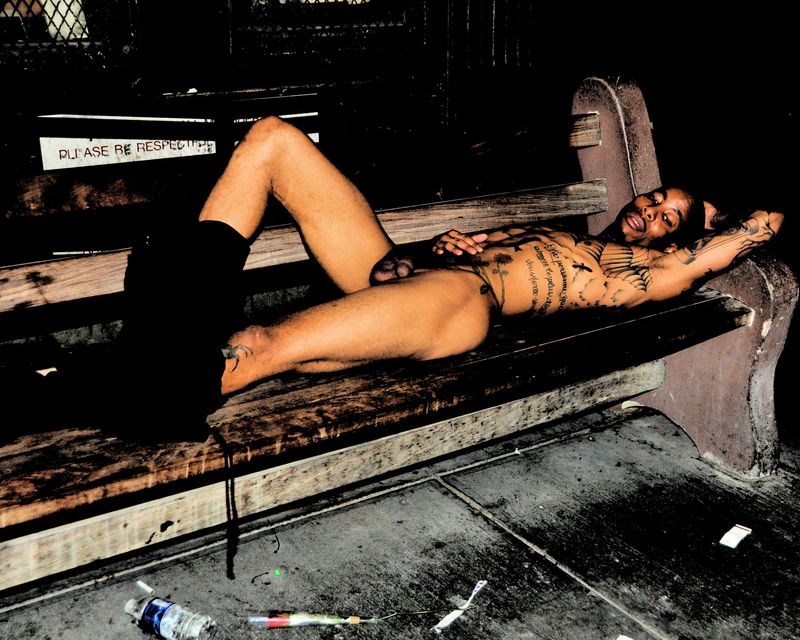 'The second time, Tarzan was reported on the Subway for being a suspicious looking character and an emotionally disturbed person (because he was waving to commuters as the trains sped by.) The cop lectured us about national security and how everyone is on edge because of terrorist threats on the subway. He talked about the horrible terrorist attacks in London and Madrid. I asked him why anyone would think that Tarzan is a threat to national security, and that just pissed him off. I then cited chapter and verse on New York City laws on nudity and photography, pointing out that he was violating our civil rights and that we were in no way breaking any laws. He became a bit flustered, began apologizing and trying to justify his behavior and finally left us alone when he realized that we have captured the entire episode on video.'


On the hunt with Tarzan (Rob Eco) 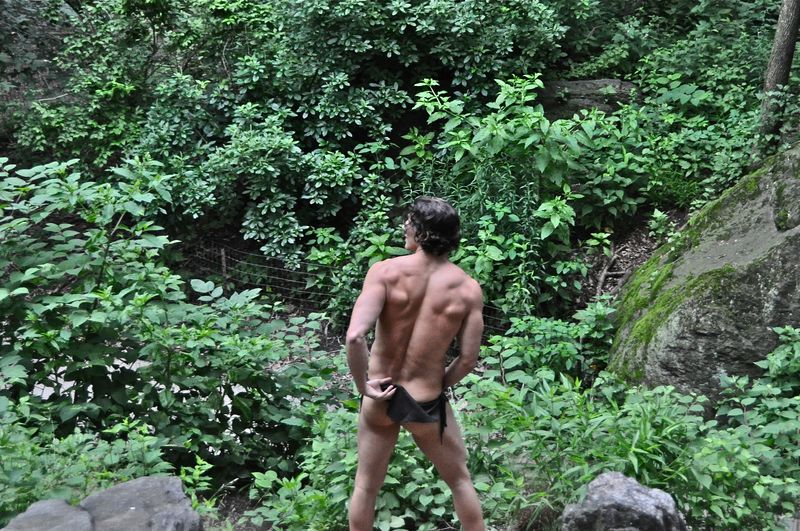 FH: You have obviously spent a lot of time out with Rob, usually in his loincloth. Given his looks, and the costume, I am sure he gets a lot of attention, maybe even many thinking a movie is being made. Does Rob get asked to pose with spectators often? What was the best, and worst Tarzan meets New Yorker encounter?

RR:'Rob is constantly asked to pose with spectators and we always oblige. The worst experience, other than the incident on the subway with the police, would have to be the woman who seriously pissed off her husband when she shoved her hand down Tarzan’s loin cloth. They walked off having a serious fight.' 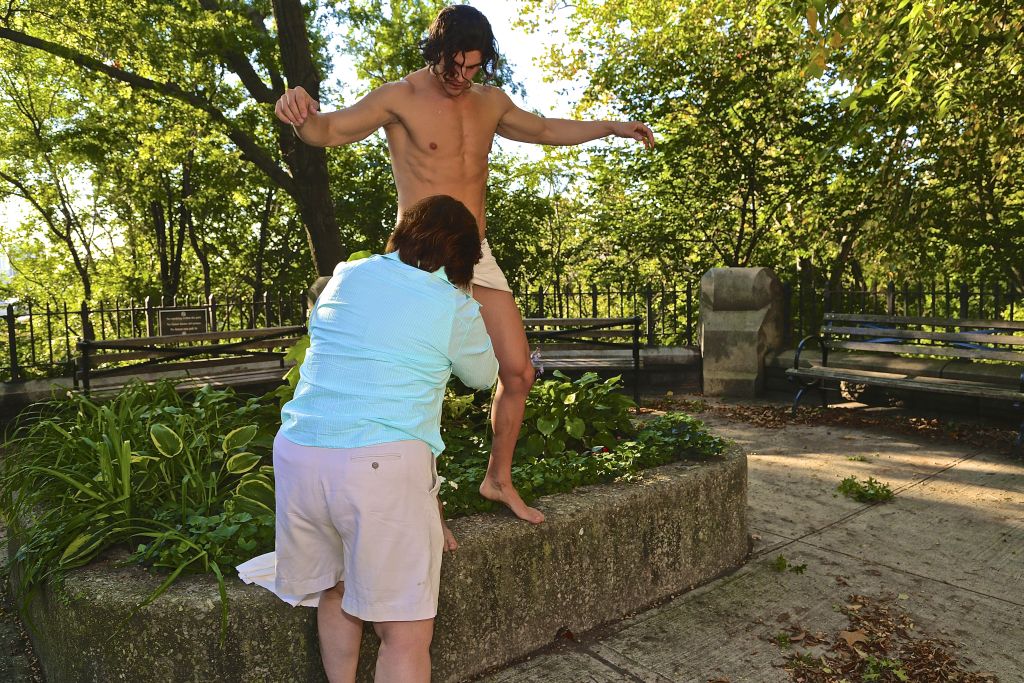 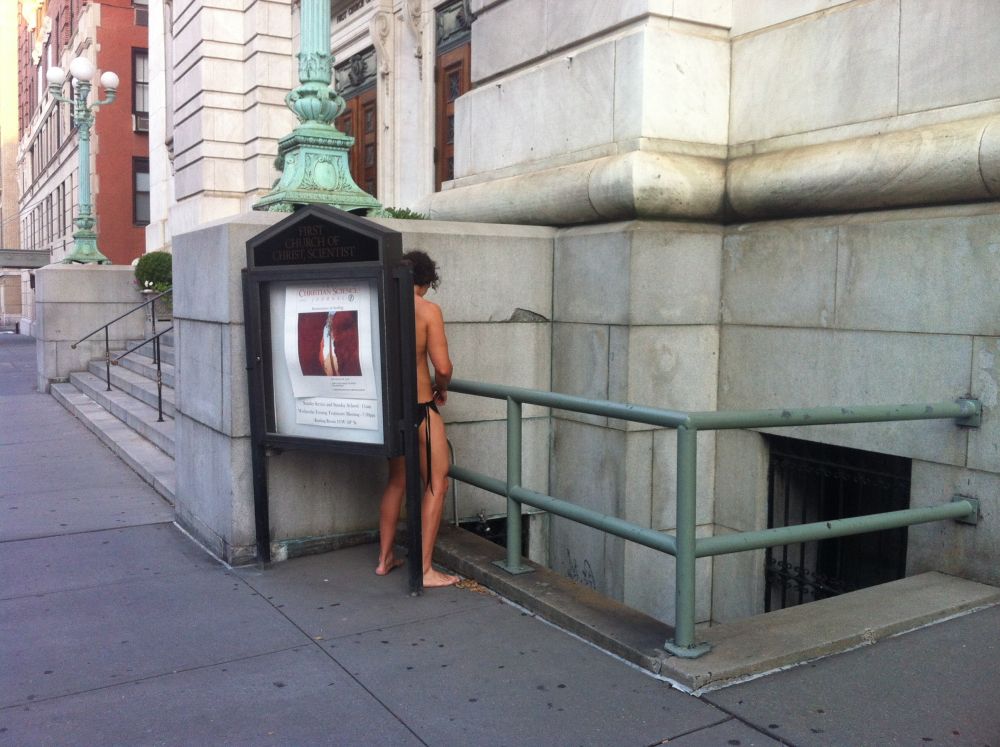 RR: 'Nope. Sorry. Unless you count a little too much ass showing from time to time. But I don’t see that as a malfunction. Oh, and then there are the times that Tarzan has to move stuff around so that he can take a piss, but I’m not sure that counts as a malfunction.' 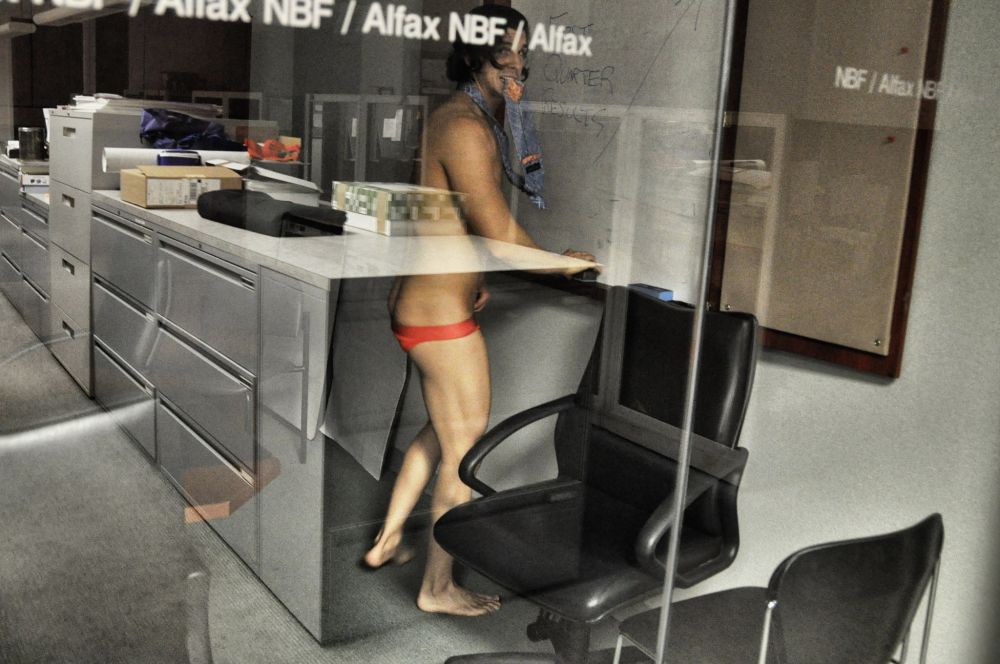 FH: Is there one question or comment that you get the most? 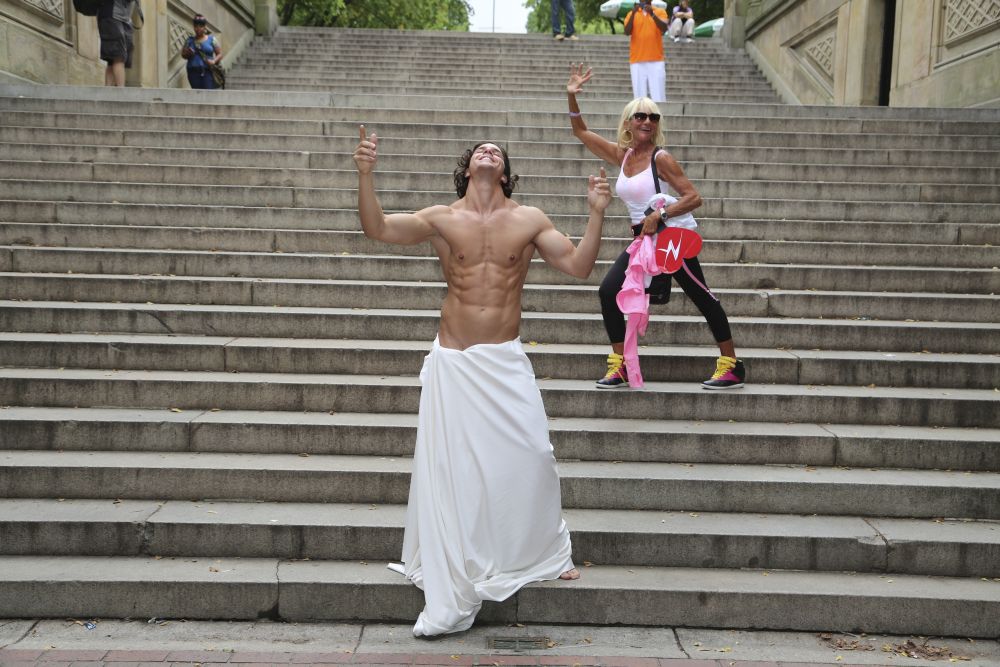 Please spend some time checking our Richard's site HERE: You will find hundreds of images; more Manhattan Men, more Cityscapes, incredible images of the changing seasons, urban reflections and much more of The King Of The Jungle! All are available to own in various formats! Enjoy the hunt! 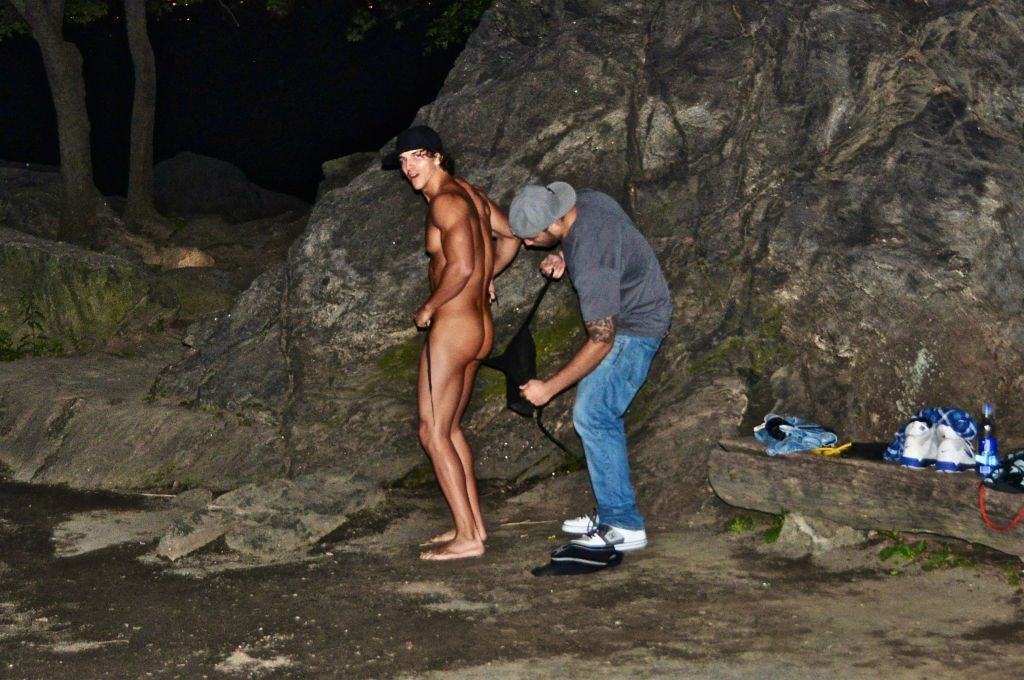 Richard is such an amazing photographer. It is just wonderful to see his work recognized in this piece!