New Manhattan Studios: When Santa's Away... 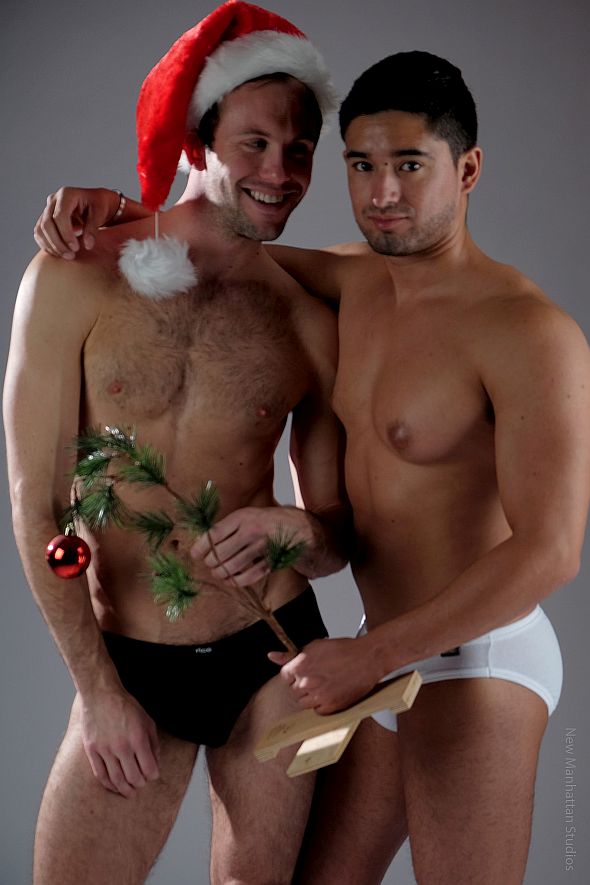 The Elves Will Play! 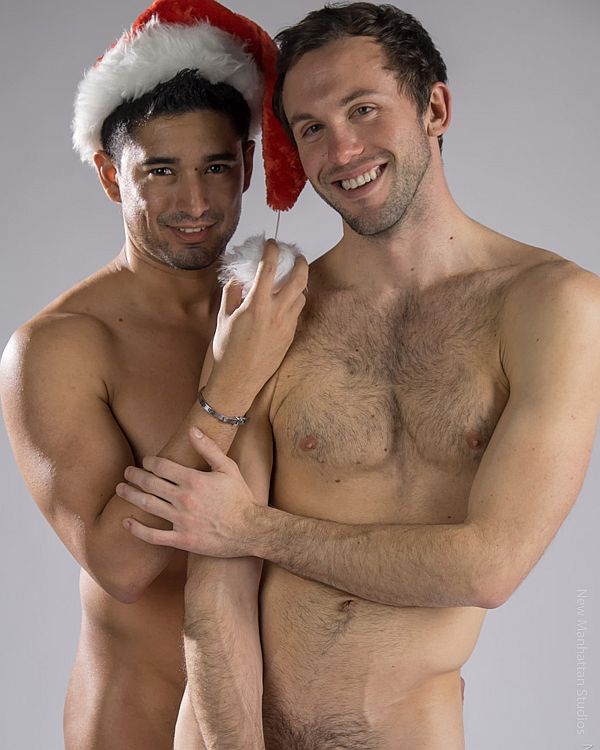 There's only one night a year when ole Daddy Santa is not around keeping an eye, and occasionally a hand... on his hard working elves. On the evening of December 24th, when most of us are snuggled with sugar plums dancing in our heads, Santa's Elves finally get to relax, and release 12 months of pent up sexual energy. Santa keeps his boys so busy, pounding together toys, they don't really have much time to enjoy themselves, or each other. 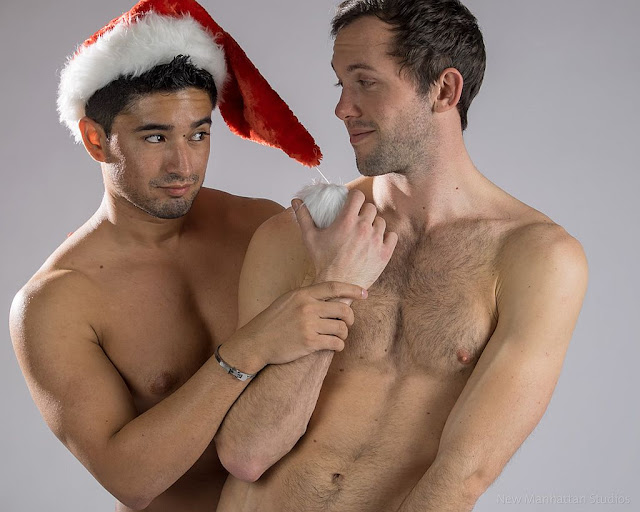 As soon as that sleigh takes off, and those 12 reindeer and Santa's husky red flanneled body disappear from site, it begins. There's not much left to party with, every toy, every candy and treat, every decoration and tree has been packed in sacks for world wide distribution, but that doesn't stop the holiday party about to begin. The Elves are usually able to find a morsel or crumb left on the toy shop floor, and a Charlie Brown tree to set the mood. That's all they really need though. With only about 12 hours of freedom, the Elf wear hits the floor hard, and the festive frolicking begins! 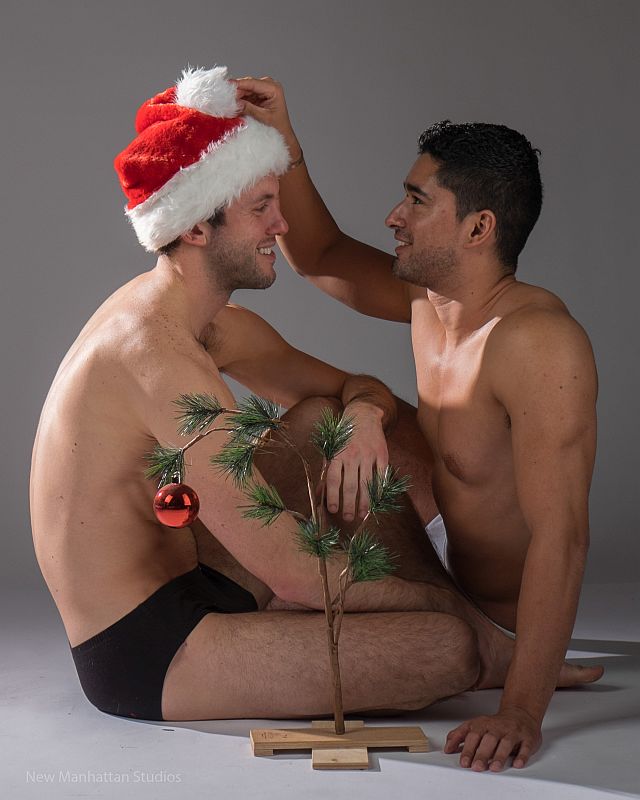 FH readers know Elf Alex very well. Alex Corso is always one of my favorite models to feature, and has been a part of many great stories and features since his debut on the site back in 2012. This past year, I focused on Alex's work as both a photographer and model. Alex, and his work with New Manhattan Studios, also helped FH celebrate St. Patrick's Day with Los Columbian Leprechaun. Elf Mark made his FH debut just last month, removing his clothing, under the water's surface with Gordon Nebeker capturing each moment of his suit strip. (A Fashionable Submersion) 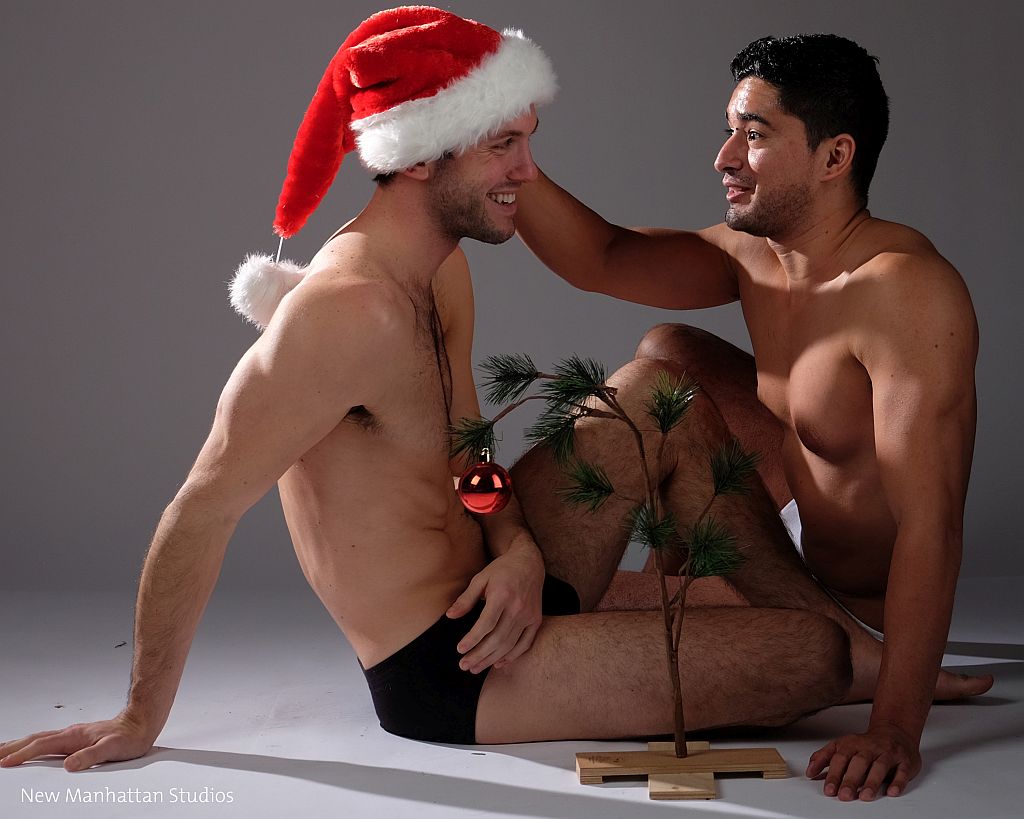 It was actually Gordon that introduced Mark to NMS's Wes and Alex earlier this summer. This series of images was taken earlier this month when Mark was in New York for a solo shoot with Wes. At the end of the session, Alex joined in for a series of holiday shots that Wes thought might end up as Christmas cards for the studio. I love the romantic and fun feel to the images, and the addition of the Charlie Brown tree. 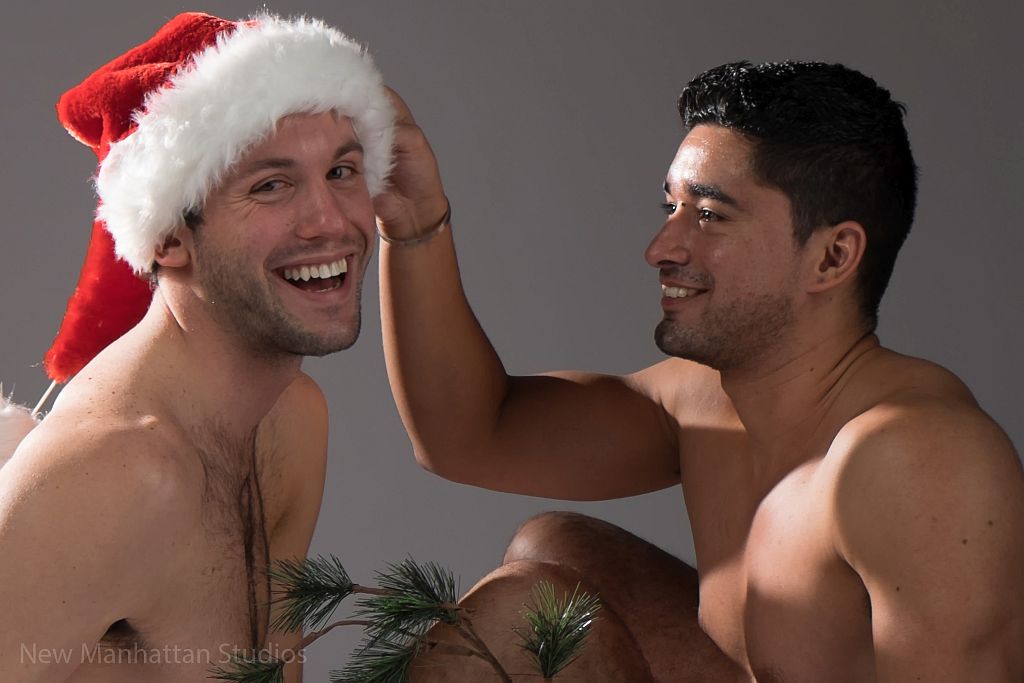 Alex and Mark look great together, and make an adorable and sexy pair of North Pole paramours. Alex oozes sexual energy and Mark's incredible smile indicates that our two little elves will make the most of their 12 hour celebration of carnality. While most of us south of Santa's workshop will wake up tomorrow full of enthusiasm for the day head, these two little elves will be heading to bed, their own beds, as Rudolph and company guide the big boss back to the snow covered village. 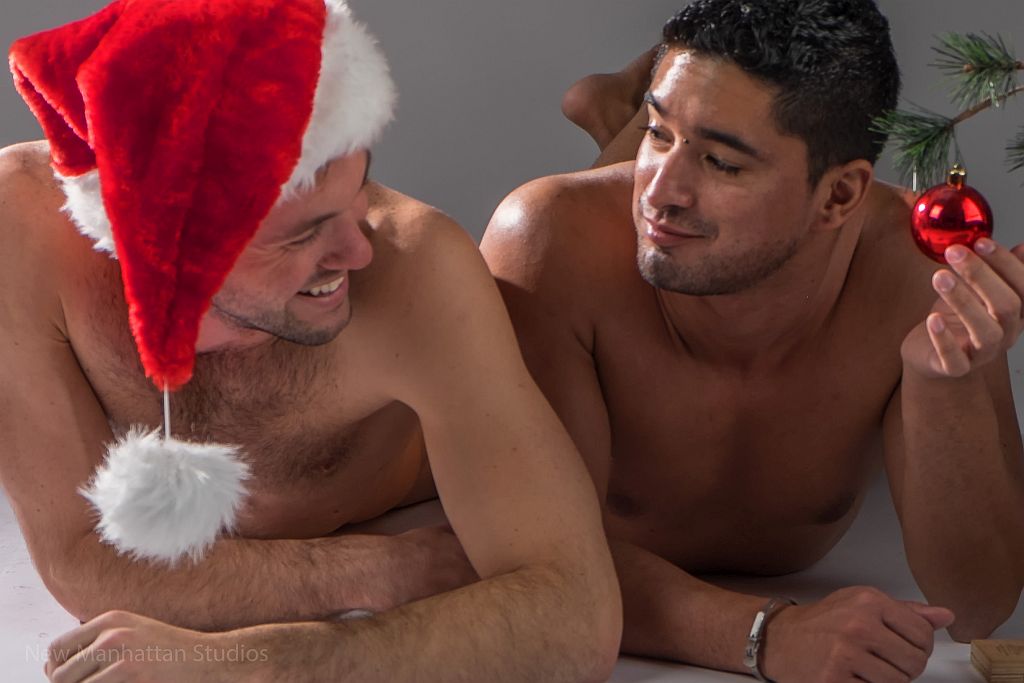 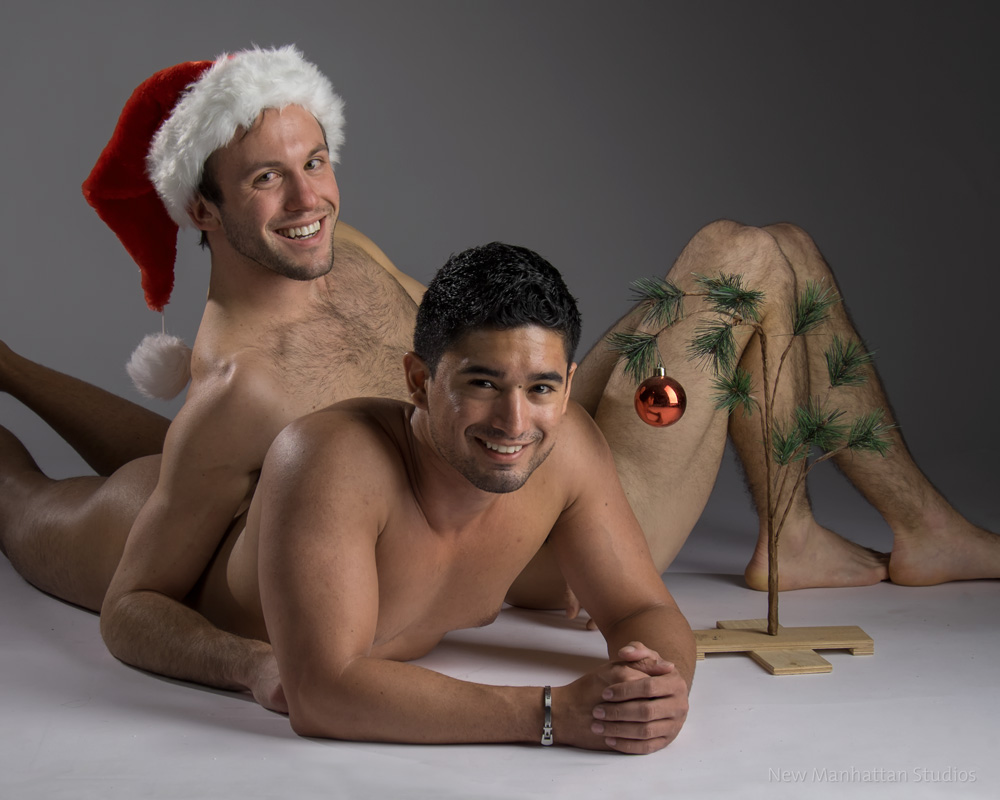 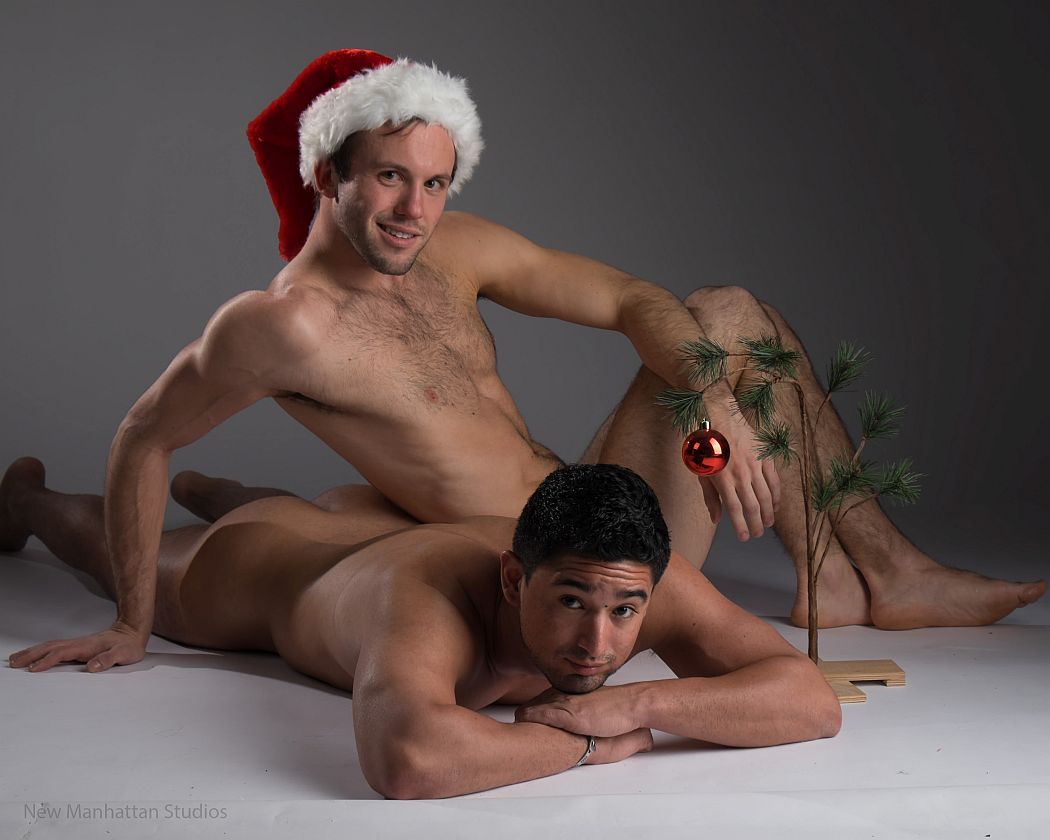 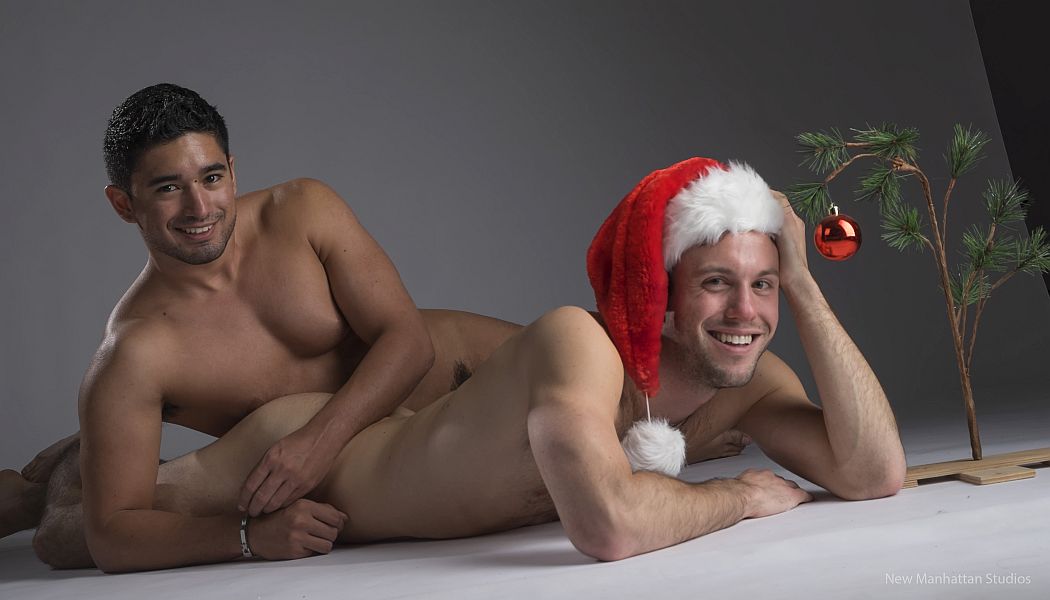